The Most Famous Lost Cities In The World 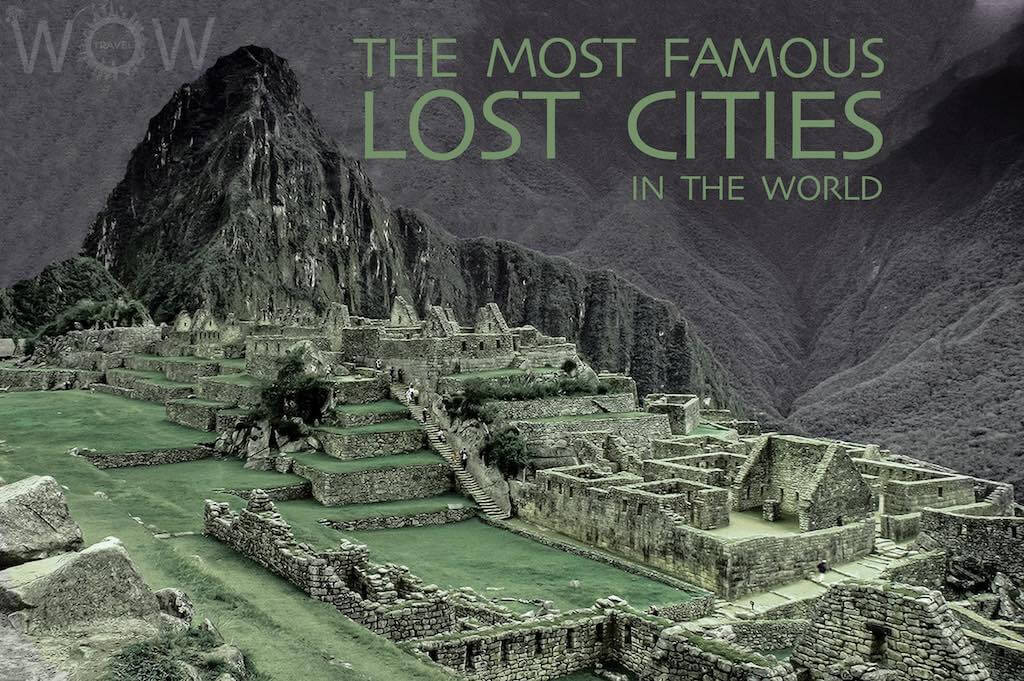 A lost city is a settlement that fell into terminal decline and became extensively or completely uninhabited. The location of many lost cities has been forgotten, but some have been rediscovered and studied extensively by scientists. There are many places around the world that have been in existence longer than we can possibly imagine. From the lost city of Babylon in Iraq to the Machu Picchu in Peru, Lost Cities were real. Explore The Most Famous Lost Cities In The World.

Located on the northern slopes of the Aures Massif is the Algerian city of Timgad. It was built in 100 AD by the Roman Emperor Trajan as a military garrison town controlling one of the main passes through the Aures Mountains to the Sahara. The town was only built to house approximately 15,000 people but its popularity and surrounding fertile land, attracted more. It soon outgrow its original plan and additional infrastructure and buildings were later added. In the fifth century the town was attached by vandals and fell into disrepair. Solomon, the Byzantine general found the city in AD 535 and came to occupy it. The city was briefly repopulated with early Christians before it was attacked by Berbers in the seventh century after which it was abandoned. It is recognized as a World Heritage Site in Algeria. Source: getaway.co.za

In the Peloponnesus region of southern Greece there is a small village called Pavlopetri, where a nearby ancient city dating back 5,000 years resides. However, this is not an ordinary archaeological site – the city can be found about 4 meters underwater and is believed to be the oldest known submerged city in the world. The city is incredibly well designed with roads, two-story houses with gardens, temples, a cemetery, and a complex water management system including channels and water pipes. In the center of the city, was a square or plaza measuring about 40×20 meters and most of the buildings have been found with up to 12 rooms inside. Source: ancient-origins.net

The inclusion of Petra may prove controversial as one can question whether it was really lost. It was certainly abandoned but may have been very well known to locals. At any rate, it was lost from Western knowledge for at least a thousand years.

The Angkor region of Cambodia and its surroundings which big in size has since been recognized as the biggest pre-industrial city in the world, and its famed temple of Angkor Wat is commonly considered to be the largest religious monument in existence.

Founded 4,000 years ago, the ancient city was the capital of 10 dynasties in Mesopotamia, and its walls and mythic hanging gardens are considered to be one of the world’s original Seven Wonders. Also believed to be the birthplace of writing and literature, due to unrest in the region in recent years, Babylon has not drawn as many visitors as expected from the far reaches of the globe. The city is located 85 km south of Baghdad and is accessible only after going through several security checkpoints. Where once stood towering gates and a bustling market city packed with traders, now only remains remnants of the city’s walls and a 2,500-year-old statue of a lion. The in-tact buildings at the ancient city are mainly ill-advised attempts by former dictator Saddam Hussein who tried to reconstruct monuments ‘to glorify Iraq’ and rebuilt the Nebuchadnezzar II palace on top of the original’s ruins. Source: dailymail.co.uk

7,000 feet above sea level and nestled on a small hilltop between the Andean Mountain Range, the majestic city soars above the Urabamba Valley below. The Incan built structure has been deemed the “Lost Cities”, unknown until its relatively recent discovery in 1911. Archaeologists estimate that approximately 1200 people could have lived in the area, though many theorize it was most likely a retreat for Incan rulers. Due to its isolation from the rest of Peru, living in the area full time would require traveling great distances just to reach the nearest village. Separated into three areas – agricultural, urban, and religious – the structures are arranged so that the function of the buildings matches the form of their surroundings. The agricultural terracing and aqueducts take advantage of the natural slopes; the lower areas contain buildings occupied by farmers and teachers, and the most important religious areas are located at the crest of the hill, overlooking the lush Urubamba Valley thousands of feet below. Source: peru-machu-picchu.com

The Roman city of Pompeii was destroyed in AD 79 after the nearby volcano Vesuvius erupted and buried the entire community under 18 meter of ash and rock. The city was estimated to have had around 20,000 inhabitants at the time, and it was considered one of the premier vacation spots for the upper class of Roman society.

The ancient oasis city of Palmyra, situated in central Syria, houses the ruins of a monumental city that was one of the most prominent cultural centers in the ancient world. The architecture is a combination of Graeco-Roman techniques with the local influences of Persia. The earliest documented references to Palmyra in its Semitic name Tadmor is found in Babylonian tablets, Mari, in the second millennium BC. It was a prominent trade route linking Persia, India and China with the Roman Empire. The bible attributes the building of Palmyra to Solomon as part of his Kingdom. Palmyra was inhabited by Arabian tribes and fell into disuse in the 16 century. It was replaced with a newer town of the same name, Tadmor, located next to it. It is recognized as a World Heritage Site and its most notable building is the temple of Ba’al. This temple is considered to be a very important religious building of the first century AD in the Middle East. Source: getaway.co.za

Mohenjo Daro, or “Mound of the Dead” is an ancient Indus Valley Civilization city that flourished between 2600 and 1900 BCE. It was one of the first world and ancient Indian cities. The site was discovered in the 1920s and lies in Pakistan’s Sindh province.

Founded in 3,100 B.C., Memphis was the capital of ancient Egypt and served as the civilization’s administrative center for hundreds of years before being abandoned with the rise of Thebes and Alexandria. At its height, Memphis is estimated to have had a population of more than 30,000, which would have made it the biggest city of antiquity. Over the years, the location of Memphis became lost, and it was a subject of much debate among archeologists before it was rediscovered by a Napoleonic expedition in the late 1700s, and it was then that the city’s sphinx, statues and temples were first seriously studied. Unfortunately, stones from the ruins had been appropriated to build nearby settlements, and many important parts of the site remain lost to historians. Source: www.toptenz.net