11 Biggest Volcanos In The World 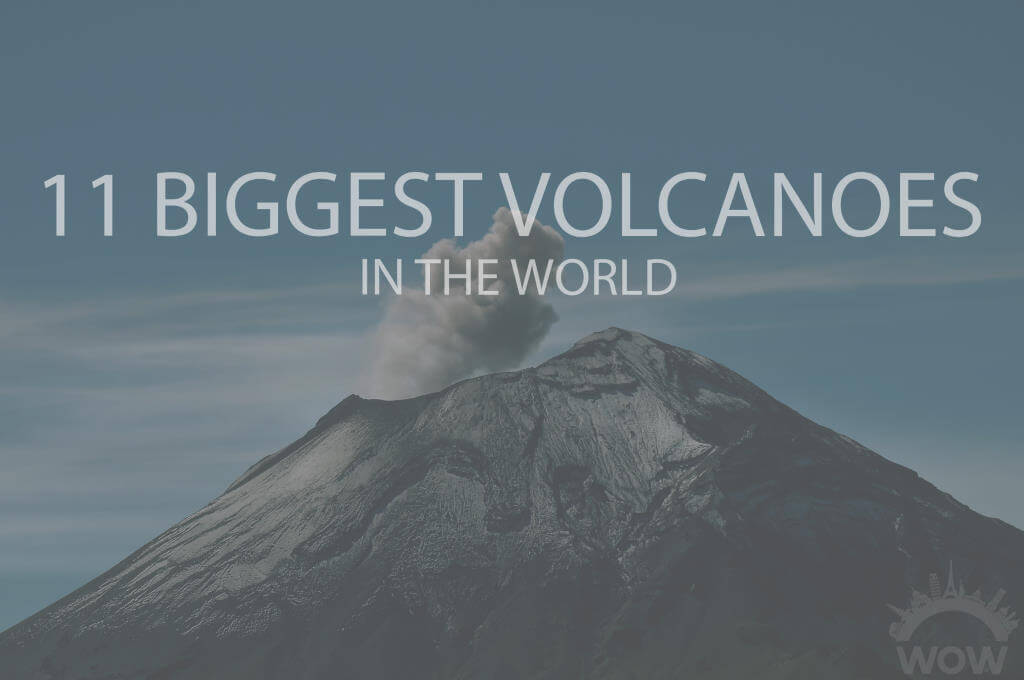 When we hear the term “volcano,” fearsome visuals of movies such as Dante’s Peak, Pompeii, and even the eponymous 1997 Tommy Lee Jones movie Volcano come to mind. There’s something absolutely terrifying about searing hot magma from the earth shooting into the sky. While it might seem like the volcanoes that have recently erupted are the most dangerous, sometimes it’s the opposite that’s true. When the biggest active volcanoes in the world don’t erupt for a long time, that’s when they’re the most dangerous. That’s because they have more mounting pressure inside of them, thus heading for a bigger explosion.

Some of the largest volcanoes, such as the Yellowstone Caldera and the ones in the Galapagos Islands, are part of some of the Most Amazing National Parks On Earth. However, in 2021 itself, we’ve seen lava erupt from volcanoes in St. Vincent and the Grenadines, Iceland, and, most recently, the Democratic Republic of the Congo. So, which are the biggest volcanoes in the world? Read on.

Located right in the heart of the lava-filled Big Island of Hawaii is Mauna Loa, currently one of the biggest volcanoes in the world. But, that’s not all. Standing tall at 13,677 feet above sea level, it’s also the world’s largest active volcano! In fact, if measured from its absolute base below sea level to the summit, the 30,000 feet-high caldera is taller than Mount Everest! What’s more, there are no restrictions for climbing up to the summit; all you need is a confirmation from Hawaii Volcanoes National Park for safety purposes. In the last two centuries alone, Mauna Loa has erupted a whopping 33 times. The most recent eruption was when the lava pulled as close as 4 miles of the town of Hilo in 1984, making Mauna Loa due for another eruption soon. In fact, volcano experts say that Mauna Loa is “waking up.” Chills.

Mount Merapi happens to be one of the most active volcanoes in Indonesia and even has been continuously erupting for centuries. Translating to “Mountain of Fire,” Merapi lies on the island of Java right in the center, about 20 miles north of Yogyakarta. Standing 9,551 feet tall, the mountain’s biggest risk is pyroclastic flows, which is the dense, fast-moving flow of hoy gases, volcanic ash, and solidified lava pieces. In fact, that’s what caused the deaths during the mountain’s 1994 explosion. However, one of Merpai’s largest recorded eruptions took place in 1006, spreading ash throughout Java. Moreover, there were also many eruptions in late 2010, with pyroclastic flows claiming many lives and having tens of thousands evacuated.

There’s no doubt that Mt. Saint Helens is one of the biggest volcanoes in the world. Located midway between Seattle and Portland in the state of Washington, this deadly volcano is also one of the biggest active volcanoes in the world. Standing at just over 8,000 feet, Mt. Saint Helens erupted last in 2008 but is most infamous for its 1980 series of explosions. Not only did it cause earthquakes over many months, but also it was responsible for the largest landslide ever recorded! In fact, the resulting debris and ash were recorded in two Canadian provinces and as many as eleven American states. The volcano is currently active, with its top filled with a lava dome and a huge glacier – phew.

One of the biggest active volcanoes in the world is Mayon Volcano, which lies on the island of Albay in The Philippines. Rising to 8,077 feet in the shape of the perfect stratovolcano, this one erupts very often, producing everything from ash and mudflows to pyroclastic flows. So, it’s always resulted in huge evacuations. The most violent eruption happened more than 200 years ago in 1814 and killed more than 1,200 people. However, historical records of the volcano’s eruptions go as far back as 1616. Most recently, the volcano erupted in January 2018, which led to giant ash plumes and spews of lava that caused more than 50,000 people to be evacuated. In fact, there have been five eruptions since 2000 alone.

One distinctive feature about Mayon is its symmetrical shape, which is dubbed “the world’s most perfect volcanic cone.” In fact, after 2006’s Typhoon Durian, this shape ended up causing destructive floods and mudslides, which killed more than 1,000 people.

Nothing says “volcanic danger” quite like a thriving city sitting on the side of an active volcano! But that’s what Galeras Volcano in southern Colombia is all about. Located near the Ecuadorian border, it’s one of the biggest volcanoes in the world. In fact, the city of Pasto sits on its eastern slopes. The volcano is notorious for having gone format in 1978 after centuries of activity, before turning active again just a decade later. In fact, a 1993 eruption killed six scientists who were investigating and studying the inner workings of the volcano. For the last two decades, these small eruptions have remained a constant theme with Galeras.

Mount Vesuvius in Italy has been one hell of a menacing and imposing figure since the infamous eruption in 79 AD that buried the ancient city of Pompeii. However, Vesuvius has been erupting for more than 17,000 years! The massive volcano lies just outside the city of Naples on the Tyrrhenian Sea coast. Not only has it had eight major explosive eruptions, but they’ve also been followed by massive pyroclastic flows. In fact, these fast-moving flows can reach speeds up to 430 miles an hour! Vesuvius last erupted in 1944, but the Italian government already has multiple plans in place for a possible future eruption. In fact, Italy has some of the highest visiting Places For Lava Lovers, including Stromboli and Etna volcanoes in the southern part of the country.

The continuously erupting Mount Agung is one of the biggest volcanoes in the world. It’s also one of the biggest active volcanoes in the world. The last major eruption in 1963 was very devastating and lasted a whopping 11 months. What’s more, it produced dangerous pyroclastic flows and ashfall that caused widespread damage and more than 1,000 deaths. Most recently, the volcano erupted between 2017 and 2019, which caused huge evacuations and sent ash tens of thousands of feet into the Southeast Asian skies. In fact, the explosions even spewed rocks and lava over a 2-mile distance.

We’re now talking about the second highest volcano in North America that lies just 40 miles southeast of Mexico City – Popocatépetl volcano. Translating to “smoking mountain,” (ominous, right?) the volcano hasn’t seen any massive eruptions. But, there have been periods of activity throughout history. In fact, smoke poured from the volcano for the first time in 1,000 years in 1994, making people fear that there might be an eruption. What scientists say is that there will certainly be a massive eruption eventually; they just don’t know when. If and when it does occur, the cataclysmic event will bring pyroclastic flows at speeds of 60 miles an hour and 1,000-degree lahars (mudflows). That will certainly require the heavily populated areas, including Mexico City, to be evacuated since the lava ash will certainly damage and destroy everything in the vicinity.

Mount Fuji is easily one of the most famous and biggest volcanoes in the world. The interesting part about it is that despite not having erupted since 1707, the volcano is still considered active! Furthermore, the 2011 earthquake that rocked the country could possibly have caused Mount Fuji to erupt once more in the future. Lying around 62 miles southwest of Tokyo, Mount Fuji is one of the “Three Holy Mountains” in Japan. Although lying dormant since its last eruption in 1707, Fuji is still considered active by scientists, with fears that a 2011 earthquake could have caused the volcano to erupt once more.

The 1707 eruption sent debris and ash into the air that reached as far as Tokyo! If Fuji erupts again, it will be very dangerous as the damages could be as much as 2.5 trillion JPY (around 2.2 trillion USD). In fact, the debris and ash could bring Tokyo to a halt.

Mount Kilauea on the Big Island of Hawaii might just be the most active volcanic mass in the world – and still, some two million visitors head here annually! The volcano has erupted frequently, but they’re mostly non-explosive and usually contained within a boiling lake of active lava. This only overflows along with the caldera occasionally. The volcano most recently erupted in 1955, which was followed by a violent earthquake with lava pouring for 88 days. What’s more, it destroyed acres and acres of orchards and sugarcane fields nearby. Similarly, a tsunami in the region caused the 1975 eruption. The most recent explosion of this active shield volcano was in 2018, and it also happens the most active of the five volcanoes on the Big Island. In fact, Kilauea erupted almost continuously between 1983 and 2018.

Topping the list of the biggest volcanoes in the world is Mount Pinatubo, which lies around two hours north of capital Manila in the Philippines. Reaching up to 4,800 feet in height, this volcano erupted in 1991 after a whopping 600 years, thus turning active. In fact, it’s one of the biggest active volcanoes in the world. It produced columns of smoke and ash and even rock debris more than 19 miles high and across. In fact, the 1991 eruption was the second-largest volcanic eruption worldwide – ever. Furthermore, the entire world felt its after-effects; there was a sulphuric acid haze, and the global temperature dropped by 0.5 degrees!

Aside from killing more than 700 people and rendering tens of thousands of people homeless, the eruption also produced pyroclastic flows that eventually formed a lake-filled caldera within the volcano. Phew!