Top 10 Things To Do In Indonesia 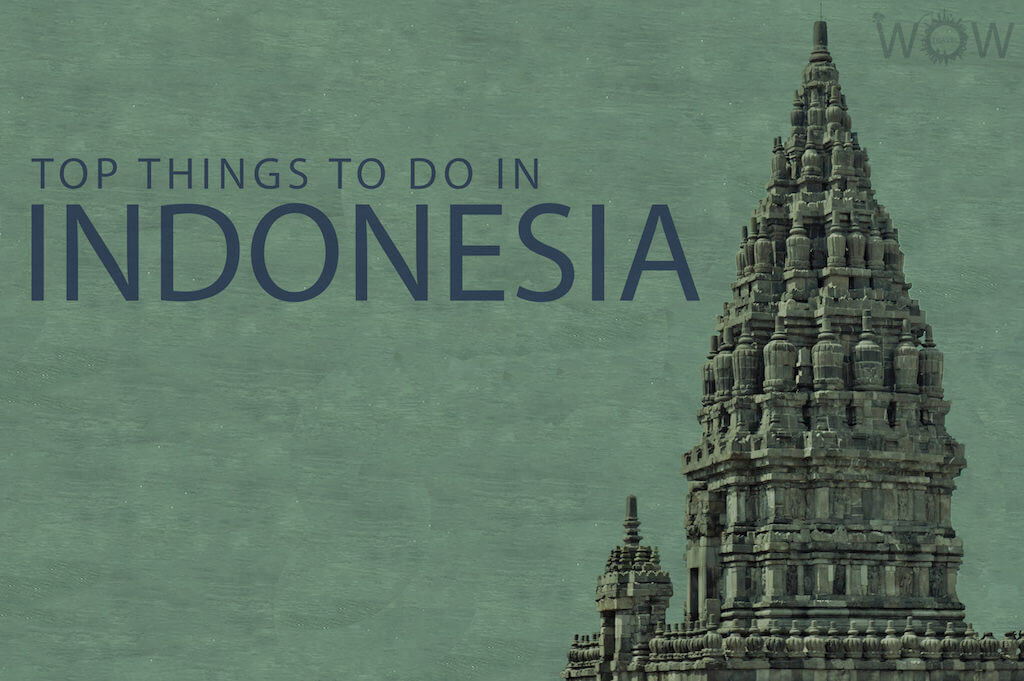 Scattered across the equatorial region is Indonesia, the most southeastern country of Asia. With over 13,466 islands, approximately 6,000 of them still remain uninhabited, it is the largest archipelago country in the world. The country is best known for its temples, beaches, volcanoes and jungles, which shelter tigers, elephants and the famous and scary Komodo dragon. Although Bali, one of its many islands, is considered nowadays one of the most popular destinations among world travelers, Indonesia has many more places yet to be discovered with endless wonderful and exciting attractions to visit. Enjoy our Top 10 Things To Do In Indonesia.

Mt Bromo volcano is a scenic tourist destination in East Java. Bromo is one of the most active volcanoes in the world, it has been frequently active since historical records began in 1804, with a total of over 50 eruptions being recorded up to the present date. The volcano is noted for its spectacular sunrises and majestic views across to Semeru volcano to the south.

Located in Java island, The 1,200-year-old Borobudur temple is home to hundreds of Buddhist statues and is considered the most magnificent Buddhist monument and the largest stupa complex in the world. It is of uncertain age, but thought to have been built between the end of the 7th and beginning of the 8th century A.D. For about a century and a half it was the spiritual center of Buddhism in Java, then it was lost until its rediscovery in the 18th century. The structure, composed of of lava-rock is erected on a hill in the form of a stepped-pyramid of six rectangular floors, three circular terraces and a central stupa forming the summit. The whole structure is in the form of a lotus, the sacred flower of Buddha. Source: buddhanet

Just off the northwest coast of Lombok, the Gili Islands are an archipelago of three small islands: Gili Trawangan, Gili Meno and Gili Air. Although each island has its own charm they all boast powdery white sand beaches, crystal clear water, spectacular coral reefs and some of the best diving and snorkeling opportunities in the region.

Komodo National Park, situated in the heart of the Indonesian archipelago, is composed of three large islands (Komodo, Rinca and Padar), and numerous smaller ones, all of volcanic origin. Here you will find hundreds of unique and endemic species of flora and fauna, incredible marine life, amazing scenery and the world’s largest living lizard – Komodo Dragons. These enormous lizards are growing to three meters and they can weigh up to 90 kg (200 lbs). The Park was declared a World Heritage Site and a Man and Biosphere Reserve by UNESCO, both indications of the Park’s biological importance.

Located 17 km (10.5 miles) east of Yogyakarta, Prambanan is the biggest and most complete remains of Java`s period of Hindu culture, built in the middle of the 9th century AD, around 50 years later than Borobudur. This magnificent Shivaite temple derives its name from the village where it is located. It is reputed to be the biggest and most beautiful Hindu Temple in Indonesia and believed to have been constructed by the Sanjaya dynasty, a flourishing Hindu kingdom that shared the island with the Buddhist Saliendra dynasty that built Borobudur.

On the Indonesian island of Sumatra, Lake Toba is an amazing volcanic crater Lake and the largest permanent lake in Southeast Asia. The lake is the result of a massive volcano eruption about 75,000 years ago, believed to be the largest volcanic explosion on earth. The center of the lake. Pulau Samosir, an island in the center of the lake, is the home of the Batak people, an ancient tribe who preserve many of their traditions. Batak people live in wooden houses that are richly painted and shaped like boats.

Located at the north of the island of Sulawesi, Bunaken is one of Indonesia’s most famous dive and snorkeling areas with outstanding coral and fish variety and world-class wall diving. The waters around Bunaken island are home to dolphins, whales, turtles, sharks, rays, sea snakes, sea cows, barracudas, tunas and the list goes on.

A remarkable town in the middle of the island of Bali, the laid-back town of Ubud is considered by many to be the epicenter for arts and culture in Bali. Ubus is home to many palaces, ancient temples, museums and art galleries. The area surrounding the town is made up of small farms, rice paddies, and dense forest. Ubud is now a hot spot for glitterati, art collectors and connoisseurs. International brands are jostling for space at the roadside stands, and tour buses are clogging its main artery, Jalan Monkey Forest with hundreds of playful Macaque monkeys. Neighboring villages are well known for unique bamboo crafts and furniture, wood and stone carving and many other crafts. Ubud is famous for it’s regularly nightly traditional dance performances, which are part of the traditional culture and are arranged for tourists on a regular schedule.

Nestled deep in central Kalimantan you will discover a haven quite unlike any other place on earth. Tanjung Puting is home to an amazing array of wildlife including it’s world famous orangutans. The park is also home to monkeys, birds and other wildlife, not to mention the pristine vegetation of the jungle itself. It is most well known for its Orangutans, made famous by a rehabilitation center at Camp Leakey. The orangutans, displaced mostly by the palm oil expansion (through deforestation), are nursed back to health and taught how to function as wild Orangs, before they are gradually re-released into the wild.

The Thousand Islands, are a chain of 128 islands to the north of Jakarta’s coast that has the potential of being Indonesia’s very own Maldives. Distance to the island resorts vary from 30 mins to 2 hours and In most of them you will find beautiful corals, an amazing variety of fish and bird life, white sand beaches and aquamarine waters. For Seeing turtle breeding and observing animals consider visiting Coconut Island, Scout Island, Island Bush Leaves and Island Grill. For diving and snorkeling; Pulau Kotok Besar, Pulau Kotok, Coral Island proud, Kroja Coral Island and Ant Island (Scout Island and Opak Island could be perfect for wreck diving). For a relaxing private vacation you should go to Long Island, Island Princess, Island Rainbow and Silver Island.