Top 10 Things To Do In Manila 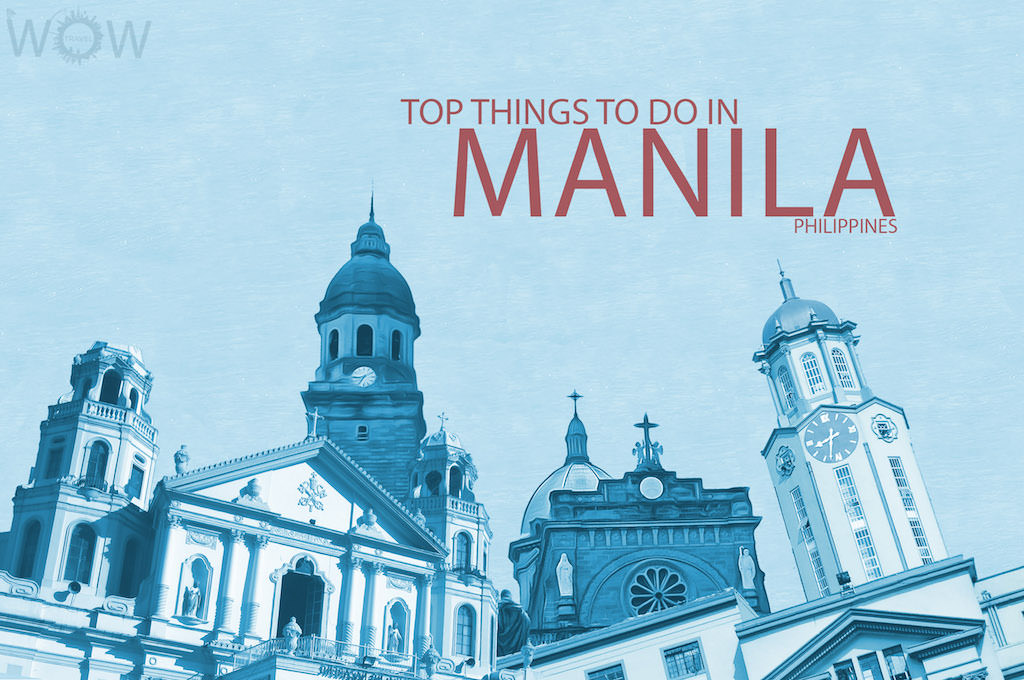 Manila, also known as the Pearl of the Orient, is located in Southern Luzon, the largest of the more than 7,000 islands that make up the nation known as the Philippines. It is one of the oldest and most beautiful cities in the world and has a colorful multi-cultural heritage and history. Manila is a totally bustling and chaotic place where you can eat, drink and shop 24 hours a day, and we love it. Here are the Top 10 Things To Do In Manila. Come hungry. Leave happy.

Jolly Jeeps Transform a Food Desert Into Snack-Attack Heaven with street food stalls in Makati City that resemble parked jeeps and serve Filipino foods from plastic bag wrapped bowls. These independent vendors found their heyday in the ’80s and ’90s alongside the rapid urbanization of the metro and still flourish today, providing the basis for street food on wheels.

Binondo is an enclave in Manila primarily populated by ethnic Chinese living in the Philippines. It is The World’s First Chinatown, established in 1594 and an exquisite place to stimulate your senses with so many exotic Chinese good and delicious Chinese cuisine.

“The Quiapo Market area is where everything happens. Located in the heart of Manila, young people make a passegiata in the evening, popular Quiapo Church is here (official name, Minor Basiica of the Black Nazarene), along with locals selling everything. Haggle if you are serious. Pink eggs, smelly shrimp, fruits, vegetables, a gazillion varieties of bananas, rice and beans. Locals sitting in the street selling. Locals tending stalls. Locals selling balloons and all manner of rattan/straw goods at rock bottom prices. A real scene…” Source: travelswithsheila.com

San Agustin is a church located within the walled city of Intramuros within Manila. Formerly a monastery, this museum consists of two floors that are connected by a grand staircase. San Agustin Church originally known as “inglesia de San Pablo”, founded in 1571, is the oldest stone church in the Philippines. There is a set route that you take around the San Agustin Museum, expose you to religious statues, painting, ornaments, altars, chests, and liturgical vestments.

“Located inside the walled city of Intramuros in Manila lies Fort Santiago, the oldest Spanish fortress in the Philippines. Strategically located near the mouth of the Pasig River just off Manila Bay, Fort Santiago was built in 1571. Originally the site of a Muslim kingdom headed by Rajah Sulaiman the area was destroyed by Spaniards and the fort was built and soon became the main defense fortress during the spice trade with the Americas.” Source: thetravellingfool.com

The 407,000 square-meter SM Mall of Asia, is Philippines’ largest and world’s third-largest mall. More than just a Mall, the SM Mall Of Asia is a tourist destination that has raised the standard of shopping, leisure and entertainment in the Philippines. Almost 1 km in length, and a perimeter of almost 2 km (1.2 miles) of shopping and fun.

In Dampa Seafood Market they believe that is that better get the ingredients yourself. This market allows visitors to purchase the day’s freshest seafood, take it to the next-door restaurants that will give you cooking services and serve you the meal that you bought yourself.  the market has it all: Oysters, scallops, lobsters, shrimps, seaweed, tuna, salmon, and every kind of shellfish you can imagine.

“Corregidor is a small rocky island in the Philippines about 48 km west of Manila which is strategically located at the entrance of Manila Bay. This island fortress stands as a memorial for the courage, valor, and heroism of its Filipino and American defenders who bravely held their ground against the overwhelming number of invading Japanese forces during World War II. Also known as “the Rock,” it was a key bastion of the Allies during the war. When the Japanese invaded the Philippines in December 1941, the military force under the command of Gen. Douglas MacArthur carried out a delaying action at Bataan. Corregidor became the headquarters of the Allied forces and also the seat of the Philippine Commonwealth government. It was from Corregidor that Philippine President Manuel Quezon and General MacArthur left for Australia in February 1942, leaving behind Lt. Gen. Jonathan M. Wainwright in command.”

Located in the heart of Manila. Rizal Park, the largest urban park in Asia, is like an oasis for relaxation and fun in the midst of Manila. It has gardens, plazas, fountains, historical markers, an observatory, stadium, open-air concert hall, a light-and-sound theatre, restaurants, food kiosks and plenty of playgrounds.