The 11 Most Religious Cities In The World 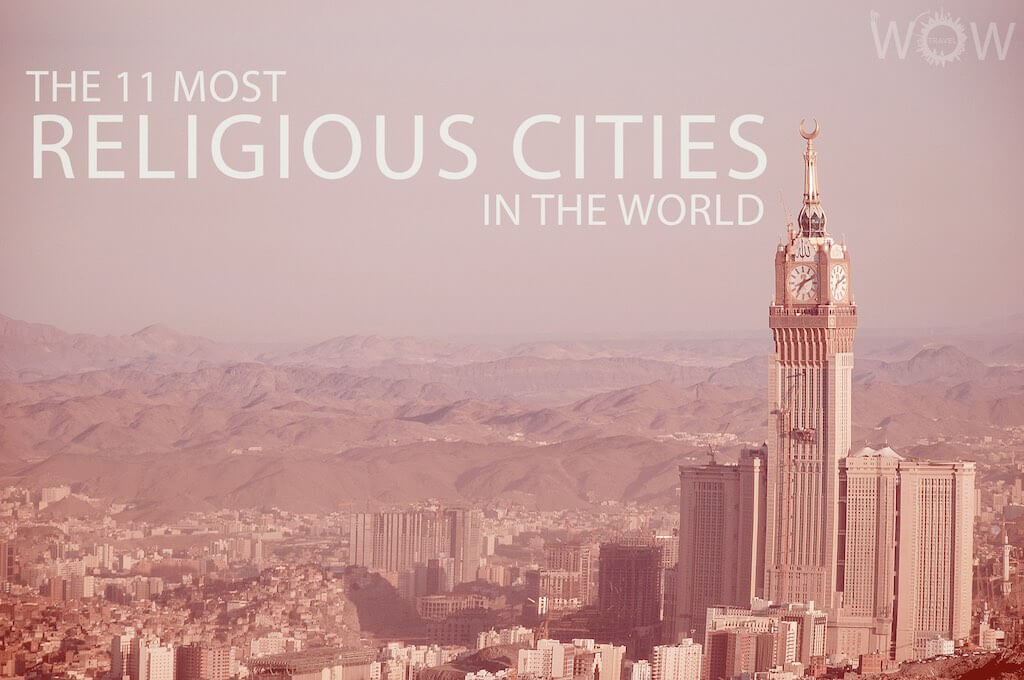 Religion plays a significant role in most people’s lives and this is evident in the 10,000 distinct religions worldwide, of which 84% are affiliated to one of the five dominant religious groups. Almost every religion has their holiest of holy sites whjere pilgrims of the faith from different parts of the world converge to pay their respects. While some of these holy sites are located in mountainous towns and remote destinations, many important cities around the world are renowned as pilgrimage centers because of their significance to the religion. Not surprisingly, most of these cities are located in Asia, a land which has been the birthplace of almost all the significant religions of the world.

Vatican City has been the center of the Roman Catholic Church since the foundation of Saint Peter’s Basilica in the 4th century. As the permanent seat of the Pope, Vatican City located in central Rome becomes the primary “holy city” for all Catholics around the world. Masses are often held at St. Peter’s Square where the faithful gather in large numbers to have a glimpse of the Pope and receive his blessings. Within this city, lies one of the 12 Most Forbidden Places On Earth You Cannot Visit.

Mecca, the birthplace of the prophet Muhammad, the founder of Islam, lies in the region of Heljazi in Saudi Arabia. A cave located 3km from Mecca is where the prophet received the revelation of the Quran. The pilgrimage to the cave is called the Hajj and is an obligatory duty for able Muslims. The city is also home to one of Islam’s holiest sites, the Kaaba, the black cuboid granite structure at the center of the Great Mosque of Mecca. Muslims all over the world are expected to face the Kaaba when they say their prayers.

For Tibetan Buddhists around the world, Lhasa, the ‘Place of the Gods’ is the center of their religious faith. This revered city was once the seat of the Dalai Lama before the Chinese invasion of Tibet. The impressive Potala Palace rising high above the city is where the spiritual leader once resided. Lhasa was the religious and administrative capital of Tibet since the mid 17th century and is still highly revered by Buddhists and Tibetans.

Jerusalem’s Old City is one of the most sacred cities of Judaism, Islam, and Christianity, being the place where these three important faiths were established. There are many religious sites throughout Jerusalem, surrounded by some of the best hotels in the city, with the most revered being the Temple Mount/Al-Haram Ash Sharif, the Western Wall and the Church of the Holy Sepulchre, believed to be the site where Christ was crucified. It’s also one of the 8 Oldest Continuously Inhabited Cities You Should Visit One Day.

The religious capital of India lies on the banks of the holy Ganges in the northern state of Uttar Pradesh. It is the holiest of the seven sacred cities of Hinduism and Jainism and is mentioned in the ancient scriptures of the Puranas and also in Buddhist teachings. Varanasi is believed to be the place where Buddha preached his first sermon and founded Buddhism. Many Hindus flock to the city to bathe in the holy Ganges or to cremate their dead with the hope of attaining salvation.

One of the prime pilgrimage sites of the Roman Catholics is Lourdes, 43km south of Pau. The grotto of the Sanctuaires Notre Dame of Lourdes is considered one of the holiest sites for Christians as it is believed that this is the place where the Virgin Mary appeared 18 times to 14-year-old girl, Bernadette Soubirous. A spring is supposed to have sprung up where Bernadette was instructed by Our Lady to dig. This spring continues to flow today and draws many from all parts of the world to be healed physically and spiritually.

Dubbed the ‘Yoga Capital of the World,’ Rishikesh has been a sacred site for Hindus since ancient times and rose to prominence on the world stage when it was visited by the Beatles in the late ’60s. Rishikesh’s spirituality arises from its location on the holy Ganges river, on whose banks several ancient and modern temples are located. There are numerous yoga centers throughout the city that attract visitors from all over the world.

A religious attraction and pilgrimage site for four different religions like the Buddhists, Hindus, Christians, and Islamists, the lofty peak often referred to as Adam’s peak has been a pilgrimage site for more than 1000 years. Sri Pada literally means ‘sacred footprint’ which Buddhists believe to be the footprint of Buddha when he ascended into heaven. Christians and Muslims believe it is Adam’s footprint when he was exiled from Eden while Hindus believe it to be the imprint of Shiva or Hanuman.

Known as the cradle of Christianity, the city of Bethlehem is an important pilgrimage destination for Christians as it contains the Church of the Nativity built on the site where Jesus was born. A silver fourteen pointed star marks the place beneath an altar. The site is especially busy at Christmas when Christians from all over converge here to celebrate Christ’s birth at the place where he was born. The 2,000-year-old city is also the birthplace of King David.

For Buddhists, Lumbini is a major pilgrimage destination as it is the birthplace of Gautama Buddha, the founder of Buddhism. Queen Maya Devi gave birth to Prince Siddharth at this place who later renounced the world to follow a religious path of teaching and sacrifice. The site of Buddha’s birthplace in Lumbini was largely lost to the world till an inscribed pillar by the Indian emperor Ashoka was discovered among the monastic ruins in 1896. Today, Lumbini is a holy city that has Buddhist centers from all parts of the world but most significant of these is the Maya Devi Temple which was built on the spot where Buddha was born.

Visitors from all over the world make their way to the religious city of Amritsar in Punjab to visit one of the most revered gurudwaras of Sikhism, the Harmandir Sahib better known as the Golden temple. The temple was completed in 1577 by Guru Ram Das and in 1604 a copy of the holy scripture the Adi Granth was placed inside by Guru Arjan. The temple is open to people of all faiths and thousands of pilgrims and visitors come to pay their respects here each day.
Read more – 13 Pictures From Amritsar That Will Will Make You Fall In Love With Sikh Punjabi and check out our list of the best hotels in Amritsar near the Golden Temple.