12 Most Forbidden Places On Earth You Cannot Visit 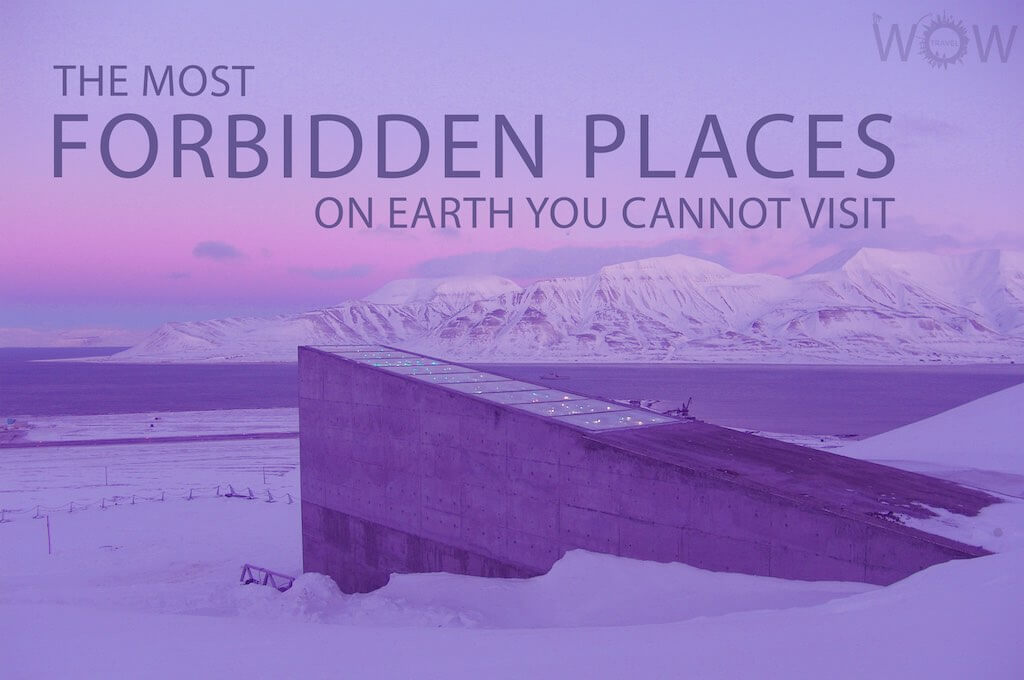 The world is so vast yet technology has made it possible to unearth cities and places that have been buried underground for centuries. Faster and more efficient travel has made it possible to reach places that were quite inaccessible in the past, yet despite all this advancement, there are some places that remain a mystery. The reason being that many places in different parts of the world are off-limits to the public, either because of safety concerns or because the activities that go on at these places are top secret. The curious would perhaps want a peek into these forbidden spaces but some of them are so heavily guarded, getting anywhere close would be a distant dream.

This highly classified United States Air Force facility has been the center of many conspiracy theories, especially ones involving aliens. Located in Southern Nevada, within the high desert and ringed by mountains, Area 51 is believed to be a testing facility for experimental weaponry. Alien enthusiasts would beg to differ however, as they claim that the base is where a crashed space ship is hidden. Although the base has never been declared a secret base it is out of bounds, except to people with special clearance. The airspace above it is also off-limits and all activities that are conducted here are top secret. It was only in June 2013 that the CIA publicly acknowledged the existence of this base.

The Terracotta warriors guarding the tomb of China’s first Emperor, Qin Shi Huang who died in 210 BC, were discovered in 1974. The discovery of these figures deep beneath a hill in Central China astounded the world as over 2,000 unique statues were excavated. Experts believe that there are probably more than 8,000 of these statues surrounding the central tomb which have not been uncovered yet. However, the tomb will probably never see the light of day because the Chinese government has chosen to respect the ancient burial sites rather than converting them into tourist attractions.

Another place which holds many secrets are the Vatican Secret Archives, ownership of which lies with the Holy See. Ownership of these archives passes to the Pope’s successor after his death or resignation. A part of these archives is regularly opened to researchers who have to undergo a rigorous application process to gain access, but parts of it still remain ‘classified’ and off-limits. The archives have historic documents, papal account books and official correspondence which dates back to the eighth century. Henry VIII’s request for a marriage annulment and a letter written by Mary Queen of Scots before her execution are also part of the archives. It is estimated that the archives span over 52 miles of shelves.

It’s probably a good thing that this island is off-limits as the inhabitants of this island are the stuff of nightmares. Also called Snake Island, this piece of land located off the coast of Brazil is home to thousands of venomous snakes, including the endangered golden lancehead pit viper. Estimates state that there is one snake to every square meter of the island and as many as 43,000 snakes in total. The island was once a part of the mainland but rising water levels isolated the land resulting in the snakes being trapped on the island. The only people with access to the island are research teams. A lighthouse that was constructed in 1909 is fully automated and still used to guide ships.

The tiny island of Poveglia which is located between Venice and Lido in northern Italy has probably been a witness to more deaths from the plague than any other island in the world. It was later converted into a mental asylum where it is believed one of the doctors murdered many of the patients for his experiments. The island has gained in notoriety over the years as being one of the most haunted places on the earth. In 2014, the Italian government offered the island for a long term lease for the purpose of development but there were no takers. As of now, the island is off-limits to visitors.

The spectacular artwork in these caves believed to be over 17,000 years old, used to be a ‘must-see’ destination for many people traveling to France. However, the constant stream of visitors to the Lascaux Caves in Northwestern France seems to have had a negative impact on these Paleolithic paintings. A fungal outbreak in the caves caused the authorities to completely close it off to the public. Today, only a small handful of scientists is allowed access to the caves for a few days a month to carry out research.

North Sentinel Island located in the Bay of Bengal and part of the Andaman and Nicobar Islands in India is totally out of bounds for visitors. The coral reef surrounding the island make the approach difficult, but the main reason for the island being off-limits is because it is home to one of the oldest uncontacted indigenous tribes in the world, the Sentinelese. The tribe is protected by the Andaman and Nicobar Islands Protection of Aboriginal Tribes Acto of 1956, which forbids travel to the island. Quite recently in 2018, an American missionary who deliberately trespassed into the area was killed by the members of the tribe.

One of the youngest islands in the world is the Surtsey Island that was formed due to a volcanic eruption that lasted four years from 1963 to 1967. This UNESCO World Heritage Site located 32km from the south coast of Iceland has been protected since its inception to allow a natural ecosystem to flourish without human interference. It provides scientists with a natural laboratory where they can understand how life forms inhabit areas naturally over a period of time. Visits to the island or its vicinity are strictly prohibited.

Brazil has several areas that are earmarked for indigenous tribes and off-limits to the general public, but in recent years there has been vast encroachment on the Amazon putting these tribes in grave danger. However, the Terra Indigena Xinane Isoladas in the Acre State of Brazil is a protected area for the uncontacted Indians. Located on the border of Bolivia and covering an area of 1,750 square kilometers, other reservations help keep the buffer in place. In the past few years, no one from the outside world has set foot on this island.

Many international institutions have set up green gene banks where the samples of the genetic material of various strains of different species of plants have been stored. However, the Svalbard Seed Bank is the backup plan of the world, the last resort in case something dire happens in the future. Duplicate specimens from genebanks around the world are stored in the seed bank just like a safety deposit box in a bank. The seeds are stored under controlled temperature conditions and can even begin to sprout 2000 years from now. The 11,000 square foot facility located about 1290km from the North Pole has a highly advanced security system and is only accessible by a handful of employees.

North Brother Island which is located on the East River between the Bronx and Riker’s Island was also a place where people suffering from contagious diseases were sent. The Riverside Hospital was built on the uninhabited island when the city purchased it in 1885. One of the most famous patients on the island was ‘Typhoid Mary’ Mallon, the first documented asymptomatic carrier of the typhoid bacteria in the United States. Mallon was forcibly quarantined on the island for 23 years until her death from pneumonia. The hospital closed in 1963 and has been left for nature to take over. Today, the island which is off-limits to the public is a bird sanctuary for Black-Crowned Night Herons.

This closed town located in the Republic of Bashkortostan in Russia is believed to be home to a nuclear missile site. Mezhgorye came into existence in 1979 and is surrounded by two battalions to keep trespassers at bay.  The town is made up of two micro districts which are located 23kms apart. Rumors fly thick and fast about the purpose of the town but there has never been any official confirmation about its real purpose.