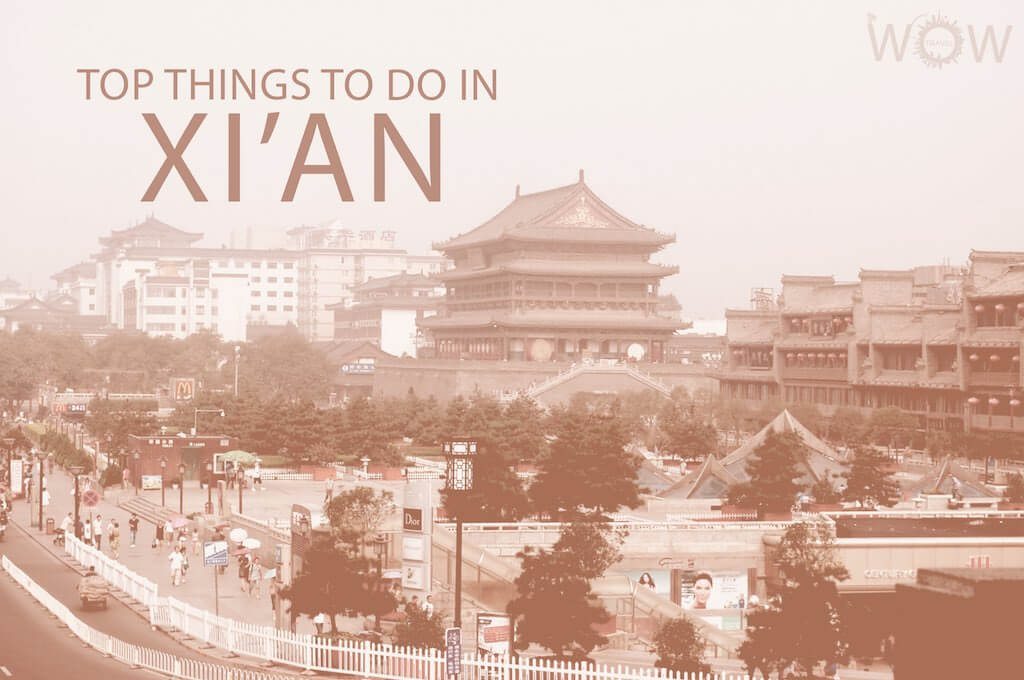 One of the oldest cities in China and the oldest of the Four Great Ancient capitals of this ancient civilization is Xi’an, also known as Sian. Xi’an was where the Silk Road began and so the city was once a hotbed of activity and a melting point of cultures. However, although the city’s importance on this route gradually declined many important structures came up under the different rulers, such as the Ming Dynasty city wall which still stands. Today, Xi’an is once again a hotbed of activity as visitors discover the cultural importance of the city through its many historical sites and ongoing archaeological projects.
[booking_product_helper shortname=”xi’an”]

One of the most renowned archaeological sites in the world is the Terracotta Army, unearthed by archeologists in 1974. The army of thousands stood guard for centuries over the soul of China’s first emperor, Qin Shi Huang until they were accidentally discovered by a group of peasants digging a well. These incredible figures dating from the 3rd century BCE stirred the imagination of the world when they were discovered. What is so incredible about these terracotta soldiers is that each one is unique, having different features and of different sizes. The necropolis of the emperor was constructed as a mini palace with halls, stables, several offices, and an imperial park. The tomb, however, is off-limits to everyone and has never been opened, possibly to preserve the artifacts

Xi’an’s fortifications are one of the oldest and best-preserved city walls in China. These imposing fortifications standing 12m high were started during the Ming dynasty in 1370 and continuously built over a period of 2 centuries. They span an area of 14 square kilometers and are popular with walkers, joggers, and cyclists. It takes roughly four hours to walk the entire length of the wall which has four watchtowers and an 18-meter wide moat. Of note is the Archery Tower which once provided security to one of the four gates by forming a trap-like chamber. Archers would shower arrows down at the enemy from this vantage point.

The most iconic landmark of the city is this seven-story Buddhist pagoda which was built during the Tang dynasty in 652 AD. It was originally a five-story structure but was rebuilt to its present size in 704. The main purpose of the pagoda was to house figurines and sutras of Gautama Buddha that the Buddhist monk Xuan Zang brought back from India. Visitors can enjoy sweeping views of the town from inside the 64m tall tower.

Located 85km northwest of the city is a Tang dynasty tomb site that was built in 684 AD. The remains of various members of the imperial family of the Tang dynasty are housed in this sprawling complex renowned for its many stone statues dating from the Tang dynasty. The spirit way which leads to the mausoleum is lined with various stone statues which include foreign envoys and animals. Apart from the main tumulus mound and the underground tomb of China’s only female emperor, Wu Zetian, 17 smaller attendant tombs are located here. Of these only five have been excavated and a restriction of 50 years has been put on excavating the other tombs. Quite surprisingly, grave robbers did not loot the treasures that were buried within the imperial tombs, although the attendant tombs had been raided. The murals within the tombs shed light on the kind of architecture and culture prevalent at the time.

Within the city wall are the four Muslim neighborhoods that have been here since the Tang Dynasty when Muslim merchants passed through the city via the Silk Road. The narrow lanes which make up this part of the city are always crowded with visitors and locals looking to enjoy some traditional Muslim cuisine. Beiyuanmen is where you’ll find the best Hui street food and snacks.

About 115km northwest of Xi’an is the sacred Famen Temple, widely regarded as the predecessor of the Guanzhong pagoda temples. The temple which dates back to the 2nd century AD is considered extremely sacred because it houses a finger bone of the Buddha which was gifted to China by King Asoka of India. The temple was rebuilt many times over the centuries as it was destroyed by natural calamities several times. In 1981, torrential rain caused the collapse of the sidewall of the 12 story pagoda and a decision was later taken to pull down the entire structure and rebuild it. This decision proved to be more than fruitful for the government as a sealed crypt below the pagoda revealed a storehouse of precious historical relics that had been hidden for over a millennium. Today most of these objects are housed in the excellent Famen museum complex.

One of the five sacred mountains of China, Mount Huashan is located about 120kms from Xi’an. The sacred mountain received their special status as these five mountains were frequented by the emperors through the centuries as pilgrimage centers. There are many influential Taoist temples and other religious structures on the five peaks and slopes of Huashan that draw visitors by the thousands. With the introduction of cable cars, the mountain has become even more popular with visitors braving the heights to avail of the stunning views that the mountain offers.

Another iconic landmark of Xi’an is the Bell Tower, the largest and best-preserved tower of its kind in China,  which was built during the early Ming Dynasty in 1384. Like the other clock towers in China, the Bell Tower’s main function was to report the time and make announcements. A huge bell was rung at dawn. Today, the tower is used for cultural functions and is open to visitors to view the musical performances. The bell tower looks spectacular at night when it is lit up and makes for a great photo-op.

Housed in a former Confucian Temple, the museum is a fascinating place to discover Chinese history through the various stone sculptures and inscribed stone tablets (stelae) that are showcased here. The museum has seven exhibition halls displaying calligraphy, paintings, and over 3,000 steles, the biggest collection in China. Some of the notable steles are an 18th-century stele which shows a Yangtze River flood control project and the Nestorian Stele which documents 150 years of early Christianity in China.

Located northwest of its sister tower which sounded the start of the day, the Drum Tower was constructed to sound the onset of the night with the beat of a loud drum. This tower also dates back to the Ming dynasty in the 14th century and was renovated twice in the 17th and 18th centuries. The two-story tower which is open to visitors provides good views of the surroundings and also has an interesting drum culture exhibition on the second floor. Musical performances are also held here between 9 am to 11.30 am and 2.30 pm to 5.30 pm.

The largest mosque in China located within the Muslim Quarter is an active place of worship and a popular tourist site. Dating back to the Ming and Qing dynasties, the walled complex comprising five courtyards and over 20 buildings is a beautiful blend of Islamic and Chinese architecture. It’s a fascinating place to visit to see how the two styles overlap and fuse. The fusion of writing styles in Chinese and Arabic calligraphy throughout the complex is interesting as is the architecture with the glazed tile Chinese style roofing, and gardens with Chinese archways and pagodas. Unlike other traditional Chinese buildings which face south, the mosque faces the west, towards Mecca.