The 12 Most Haunted Places In The World 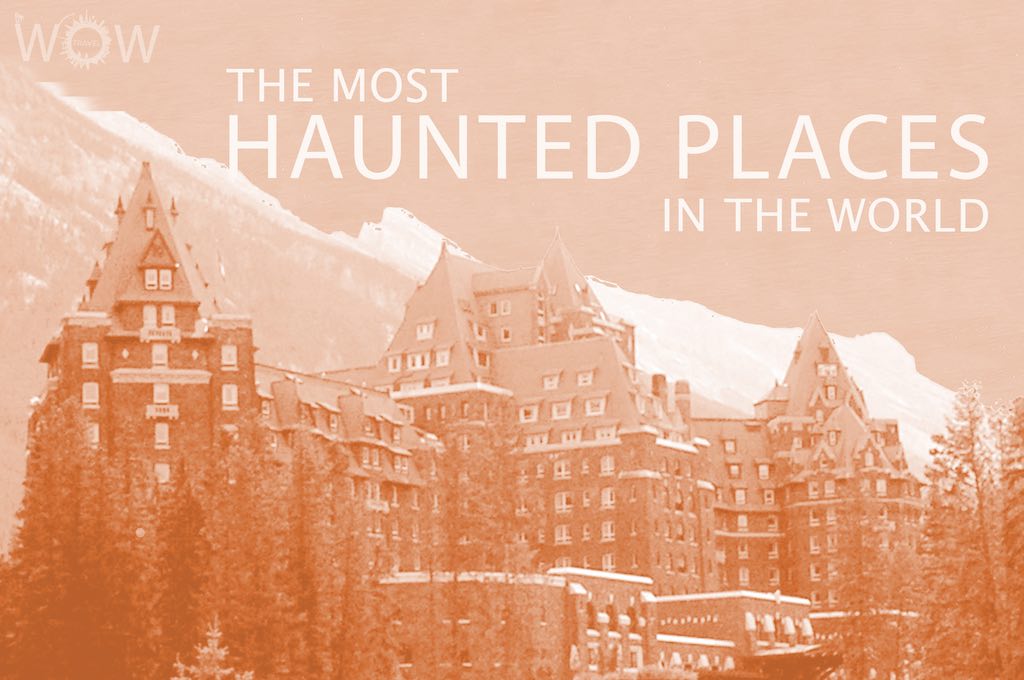 Hair raising ghost stories and death-defying experiences have always had their fair share of followers. There is something morbidly fascinating about the supernatural, especially ghost stories that have been passed down through the ages. These hair raising tales have gripped the imaginations of many a novelist and filmmaker. However, the truth behind some of these stories is sometimes stranger than fiction and many daredevils have risked their peace of mind to unearth these mysteries. Buildings and spaces throughout the world hold chilling secrets of the dead which sometimes come to light with sightings of spirits and tales of them being haunted. Our list of haunted places in the world has some macabre tales to tell. Some of these places are so scary, they’ll probably keep the most daring ghostbuster out.

The Ararat Lunatic Asylum or Aradale Mental Hospital as it was later called, opened in 1867, about 205km away from Melbourne. In its 130 year existence when it closed down in 1997, the mental institution had been a witness to 13,000 deaths. Out of the 60 buildings that comprise this sprawling complex, the ‘J Ward’ was the most infamous as it was previously used as county jail and also housed one of Australia’s controversial prisoners, Bill Wallace. Wallace spent 64 years of his life at Aradale until he eventually died at the age of 107. Visitors to the complex have reported feeling nauseous and faint and also experiencing sudden pain. Some have even reported feelings of being ‘shoved and bitten.’ Besides the ghosts of patients, there have also been sightings of Nurse Kerry who frequents the women’s ward.

Built in the 17th century, the fort which is located in the state of Rajasthan in India is said to bear the curse of an ascetic, Guru Balu Nath, who the King Madho Singh had enraged by allowing the shadows of the fort to touch his place of meditation. Another legend has it that the fort and the surrounding village was cursed by a tantric priest who was in love with the princess Ratnavat. When the princess turned down his proposal, the tantric put a curse on the princess, her family, and even the village. There have been reports of strange lights, unusual sounds, and blood-curdling screams after dusk. Visitors are not allowed near the vicinity of the fort before sunrise and after sunset.

The Eastern State Penitentiary in Philadelphia, was once the most famous and expensive prison in the world. It held some of America’s most notorious criminals behind its massive walls between 1829 and 1971, including Al Capone and ‘Slickie Willi’ Sutton.  After the closure of the prison in 1971, it is believed that the spirits of the deceased took over the prison which lay abandoned for many years. Visitors have reported strange sightings, loud whispers and unexplainable eerie sounds like crying. Even loud vicious laughter has been heard within the empty prison walls.

Opened in 1888, in one of the most beautiful surroundings of Canada, the Fairmont Banff Springs Hotel is renowned for its occupants who have never left. The most famous amongst these is the Ghost Bride, whose story dates back to the late 1920s. On the wedding day of a young couple, the bride decked up in her wedding gown was about to descend the marble staircase when something caused her to slip and fall to her death. Staff and guests at the hotel have sighted a veiled figure moving up and down the stairs, and some have even reported seeing a wedding dress dancing in the upstairs ballroom. The other famous occupant is Sam the bellman who regularly makes an appearance to help guests. Several rooms are said to be haunted and guests have reported being pushed off their beds or have had their pillows yanked from under them.

The Highgate Cemetery which was built in 1839 has been the site of some extremely disturbing activity, although it was a highly sought-after burial ground in the late 1800s. The final resting place of over 1,70,000 people including famous personalities like Karl Marx and Douglas Adams, was a part of the Magnificent Seven cemeteries that were built in the 19th century in London. During the 1970s the horror films of movie studio Hammer fuelled public speculation and interest in the cemetery which became a site of desecration and grave robbing. Stories of the vampires of Highgate began to make it to the news and many corpses were unearthed and mutilated with wooden stakes. Two magicians Farrant and Manchester egged on the public and on Friday the 13th, vampire hunters swarmed the cemetery, jumping over gates and walls. To this day the cemetery is a popular location for paranormal, vampire and occult enthusiasts.

This forest located near Cluj-Napoca in Romania is said to be the world’s most haunted forest. With its weirdly shaped trees and unexplained charring, the forest is said to have been the site of UFO sightings and paranormal activity. Legend has it that a shepherd disappeared in the area with his flock of 200 sheep and so the forest is often referred to as the ‘Bermuda Triangle’ of Romania. Strange lights, paranormal sightings, disembodied female voices, and strange apparitions are associated with this forest. Visitors have also reported being scratched and experiencing other unusual sensations when visiting the area.

This spooky place located in the channels of Xochimilco south of Mexico City, is a huge attraction for visitors fascinated with the macabre. The island is filled with dolls that hang from the trees and buildings all over the island. Legend has it that the owner of the island Julian Santana Barrera was haunted by the ghost of a young girl who had drowned in the canal. Although Barrera lived miles away from civilization he would often hear footsteps and whispers. To appease the spirit, he spent the next fifty years of his life hanging dolls all over the island. Rather strangely, Barrera is said to have drowned in the exact same spot where the girl’s body had been found. Visitors to the island report a feeling of being ‘watched’ by the soulless eyes of the dolls.

This hospital was erected in 1935 for the British Royal Air Force but the British withdrew during the Japanese occupation of Singapore in 1942. When the Japanese took Singapore they turned part of the hospital into a prison camp where they held and mercilessly tortured British soldiers and their allies and also any person who was considered anti-Japanese. After the war, however, the hospital was returned to the British. It is rumored that many dark deeds that were committed during the war at the hospital have left many a wandering soul, caught between worlds. In recent years visitors who have been to the grounds of the hospital have reported spirits of bloody soldiers walking around the halls. In 2017, a video (whose authenticity has not yet been established) was circulated on the internet of the spirit of a nurse carrying a baby in the hospital.

What was once an island that held over 160,000 patients of the plague between Venice and Lido in Italy is now one of the most haunted places in the world. It is said that the hapless victims who died on the island were so many that a large part of the soil on the island consists of human remains. Between 1793 to 1814, Poveglia was used as a quarantine station for victims of the plague and in 1922 it was converted into a mental hospital. During this time it is believed that a doctor at the hospital tortured and killed many of the patients in a most ghastly manner. The doctor is said to have met with an untimely end from falling or possibly being thrown off from the bell tower. The hospital was closed down in 1968 and the island has since been vacant and completely off-limits to visitors.

The Stanley Hotel located near the Rocky Mountains in Colorado, catapulted into the public imagination when Stephen King used it as an inspiration for his book ‘The Shining’ after he visited in 1974. Although no paranormal activity had been reported prior to Stephen King’s stay, stories about the ghost of the chambermaid, Elizabeth Wilson, abound. In 1911, an explosion caused by a candle in Wilson’s hand sent her crashing through the floor of Room 217 with two broken ankles. Although she survived the trauma, her ghost is said to haunt Room 217.  Guests claim to have had their clothes folded and put away neatly without anyone having entered the room. A ghostly figure resembling Flora Stanley has also been spotted in the fourth floor of the hotel.

The massive stone tower, which was built in 1067 by William the Conqueror in the center of his London fortress in England, is said to have been the site of some terrible executions and tortures. Henry VI was murdered in its environs during the War of the Roses and in 1438 two young princes of Edward IV disappeared within its walls never to be seen again. The Tower was also the place where Anne Boleyn was executed on orders from Henry VIII. The sightings of two little boys holding hands and looking quite lost are the most commonly seen ghosts of the Tower. Another famous ghost of the Tower is Anne Boleyn, whose headless apparition is said to frequent the Tower Green where she was beheaded.

Known as one of the oldest standing buildings of South Africa, Cape Town Castle, also known as the Castle of Good Hope was declared a historical monument in 1936. The castle which was set up by the Dutch East India Company initially operated as a seat for the government but was later transformed into a more sinister place. A section of the castle became a torture chamber where gruesome punishments, torture, and executions were carried out. Predictably the castle with such a gruesome history is said to be haunted by the souls of those who perished here. People have caught glimpses of a floating human figure without legs; thought to be the ghost of a soldier who hanged himself from the bell tower 300 years ago. Guards have also reported screams from the torture chamber and various other paranormal activity in the vicinity at night.