10 Most Famous Statues In The World 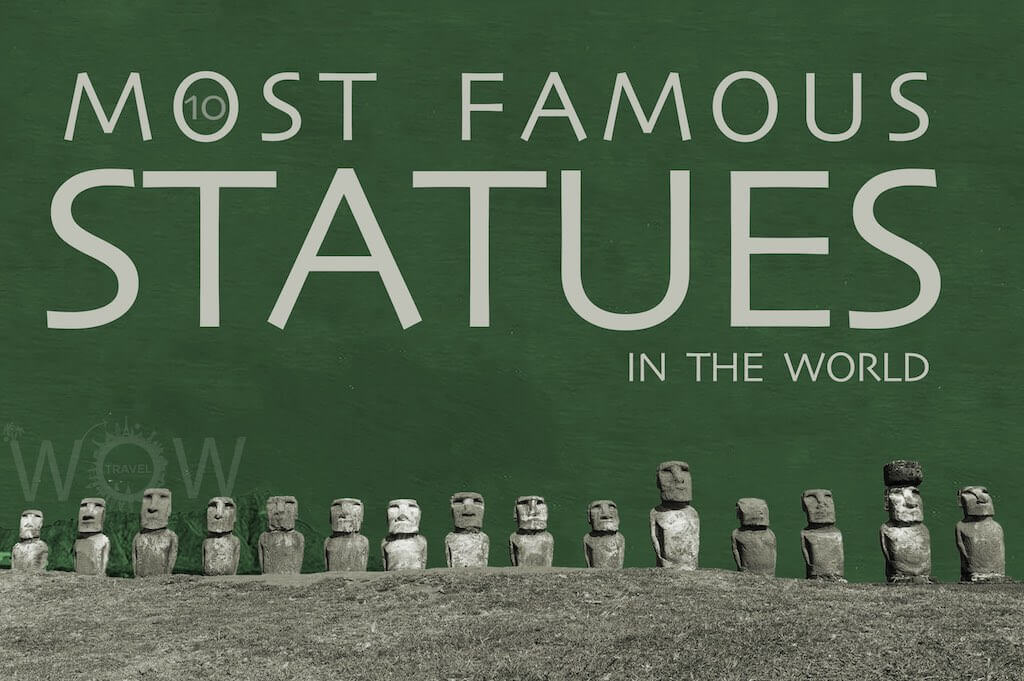 Over many centuries, great artists have provided humanity with stunning statues, each having a story to tell. These statues are considered to be beautiful, distinctive and a symbol of different cultures and traditions, but most importantly they have educated, inspired and moved us for centuries and continue to influence our understanding of the world. Here are the Top 10 Most Famous Statues In The World.

This astonishing Renaissance sculpture was created between 1501 and 1504. It is a 4 meter (14 ft) marble statue depicting the Biblical hero David, represented as a standing male nude. Originally commissioned by the Opera del Duomo for the Cathedral of Florence, it was meant to be one of a series of large statues to be positioned in the niches of the cathedral’s tribunes, way up at about 80 meter (262 ft) from the ground. In 1873 the statue of David was removed from the piazza, to protect it from damage, and displayed in the Accademia Gallery, Florence, where it attracts many visitors. A replica was placed in the Piazza della Signoria in 1910.

The Great Sphinx of Giza, Egypt

The Sphinx is a limestone statue of a mythical creature. The creature has a lion’s body and a human head. It stands on the Giza Plateau on the west bank of the Nile. It is the largest monolith statue globally and the oldest monumental sculpture believed to have been built by ancient Egyptians around 2558-2532 B.C.

The Mother Russia statue (also known as The Motherland Calls), is a well known statue of Mamayev Kurgan in Volgograd, Russia. This has an estimated measurement of 82 meters (270 ft) high and the sword is about 31 m (105 ft) in length.

The Olmec were an ancient Pre-Columbian civilization living in the tropical lowlands of south-central Mexico, in the modern-day states of Veracruz and Tabasco in Mexico. The Olmec civilization flourished roughly from 1400 BC to 400 BC. The heads are thought to be portraits of rulers, perhaps dressed as ballplayers. No two heads are alike and the helmet-like headdresses are adorned with distinctive elements.

Also known as Lady Liberty, this colossal sculpture historically is located in New York Harbor. It was a gift from France to the United States in 1886, and it is probably one of the best-­known statues in the world. The Statue of Liberty stands as a reminder of its role as the first face to greet immigrants coming to America to seek a better life.

High on the summit of Mount Nemrut is a huge but little visited necropolis, home to the beheaded gods of the past. Nemrut is a magnificent historical site bearing the most valuable monuments of the Kingdom of Commagene. The statues of Greek and Persian gods made in 62 BC upon the order of the Commagene King Antiochus and the king’s own tomb and temple are still preserved in the present day. The tumulus and sanctuary include also stone carvings of gods. The eagle head is one of the the most well-known and intriguing carvings. UNESCO has inscribed Mount Nemrut on the UNESCO World Heritage List in 1987 and called the site the 8th Wonder of the World.

Located near Mykonos, the island of Delos is one of the most important mythological, historical and archaeological sites in Greece. The Terrace of the Lions preserves the memory of what was once an imposing series of stone lions. The Terrace of the Lions was dedicated to Apollo in around 600 BC. Originally, there were up to a dozen big squatting guardian cats lining the Sacred Way; today, only seven remain.

On the top of the Corcovado Peak in Rio De Janeiro stands the statue of “Cristo Redentor” with arms wide open, overlooking and guarding the city. Christ the Redeemer Statue was built to commemorate the 100th anniversary of Brazilian Independence in 1922. It was completed in 1931, and at 38 meter (125 ft), became the largest Art Deco sculpture in the world! It’s made of soapstone and concrete and weighs over 700 tons.

Rapa Nui, or Easter Island as it was to become known, is the Polynesian island found in the south east Pacific Ocean. It is famous worldwide for the large monumental Moai statues. The statues, whose traditional name is “moai,” were carved from volcanic rock between A.D. 1100 and 1500 by ancient Polynesians. They range in size, with the tallest reaching 33 feet (10 meters). Although their significance is still somewhat of a mystery, the moai are thought to have been representations of the indigenous peoples’ ancestors. Tribespeople would probably have carved a new statue each time an important tribal figure passed away. Rapa Nui’s mysterious moai statues stand in silence but speak volumes about the achievements of their creators.