The 9 World’s Most Breathtaking Monoliths 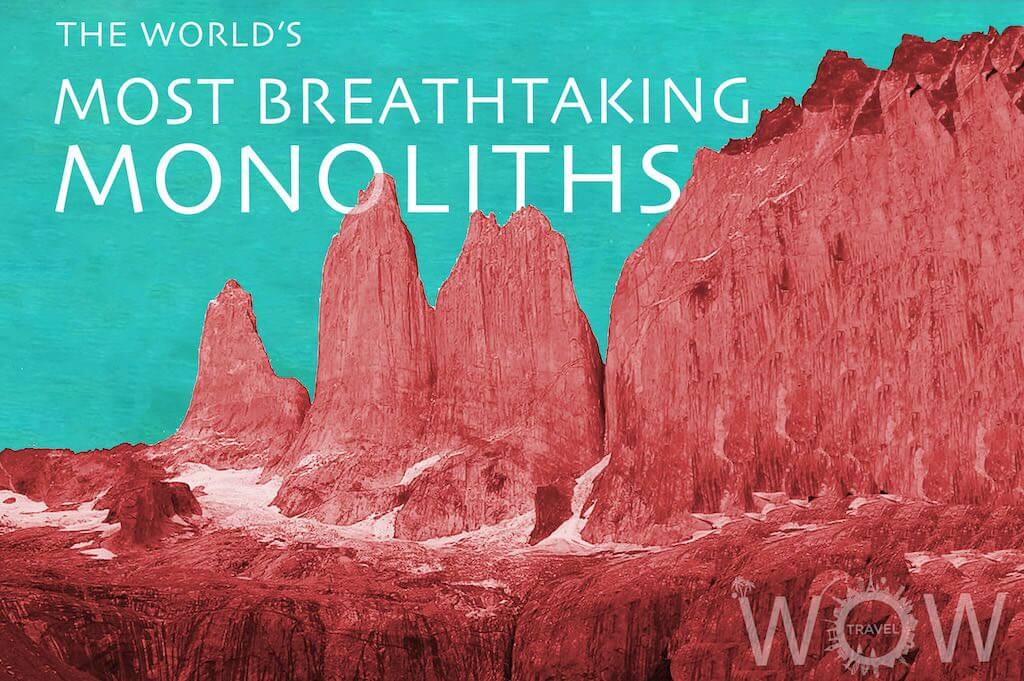 A monolith is a monument or natural feature such as a mountain, consisting of a single massive stone or rock. Erosion usually exposes these formations, which are most often made of very hard and solid metamorphic rock. The word monolith comes from the Greek word “monolithos”, derived from mono (“one” or “single”) and lithos (“stone”). Many rocks and mountains are called the largest monolith in the world but these claims are rarely backed up by geological information. Check out the list of the 9 world’s most breathtaking monoliths.

Rising 433 meters (1,421 ft) above the North-Central Mexican state of Querétaro, Peña de Bernal Natural Monument is the tallest freestanding rock in the world, formed about 65 million years ago during, the Jurassic period. Pena de Bernal marks the entrance to the Sierra Gorda, a mountainous area that the United Nations Educational, Scientific and Cultural Organization declared a Biosphere Reserve in 2001. More recently, in 2009, the rock itself was named an Intangible Cultural Heritage site by UNESCO. Yet, despite all its accolades, Peña de Bernal has largely remained a mystery to geologists; uncertainties surround its origin, its age, even its composition. Source: livescience

These amazing monoliths are called ‘Las Torres’ soaring almost vertically more than 2884 meters (9,462 ft) above the Patagonian steppe, the granite pillars of Torres del Paine (Towers of Paine) dominate the landscape. They are located inside Torres del Paine National Park, Chile, Patagonia. It was declared a biosphere reserve by UNESCO in 1978, and it is internationally recognized as one of the most beautiful, unique and uncontaminated places on the planet.

When the African Plate collided with Europe some 55 million years ago, the prehistoric sea that existed in the basin of the Mediterranean dwindled and dried up. Then 5 million years ago, the Atlantic waters burst through the Strait of Gibraltar and created the Mediterranean as we know it and isolating the Rock. The Rock of Gibraltar, located off the south-west tip of Europe on the Iberian Peninsula is 426 meters high (1,396 ft). The Rock is the crown property of the United Kingdom and borders to Spain. Most of the Rock’s upper area is covered by a nature reserve, home to around 250 Barbary Macaque monkeys (the only wild primates found in Europe). And this is one of the top things to do in Gibraltar.

Devils Tower is a monolithic igneous intrusion or volcanic neck located in the Black Hills in northeastern Wyoming (U.S.). Devils Tower rises above the surrounding grassland and Ponderosa pine forests like a rocky sentinel. Northern Plains tribes have worshiped near this remarkable geologic formation for thousands of years. Fur trappers, explorers, and settlers alike were awed by the tower’s majesty. In 1906, US President Roosevelt established Devils Tower as the nation’s first national monument.

Zuma Rock, 725 m (2,400 ft) above ground, is a large monolith located in Niger State, Nigeria. It is just north of Nigeria’s capital Abuja, along the main road from Abuja to Kaduna. As you get closer to the rock, a human-like face becomes visible with engravings representing the eye sockets, the nose and the mouth on the side of the rock that faces the Abuja – Kaduna express road. The area itself offers tons of activities, you can read about these on top things to do in Abuja.

Uluru (the Aboriginal and official name) is one of the most impressive landmarks in Australia. Better known as Ayers Rock, named after Sir Henry Ayers, It is a huge chunk of sandstone and a ‘true’ monolith, it resides in Uluru-Kata Tjuta National Park. Ayers Rock is located down towards the southwest corner of the Northern Territory and close to the geographic center of Australia. The rock was created over some 600 million years, and the Aborigines have been in the area for the last 10,000 years. It originally sat at the bottom of a sea, but today stands 348 meters (1141 ft) above ground. One of the most startling Uluru facts, however, is that some 2.5kms (1.55 miles) of its bulk is underground. Source: uluru-australia

Sigiriya rock is an isolated granite monolith located amidst the Sigiriya forest reserve in Sri Lanka. The forest reserve is inhabited by large number of fauna and flora species and it attracts many bird lovers due to its richness of avian fauna species. The highest point of the rock is 500 meters (1640 ft) above sea level. Sigiriya had been used as the fortress of King Kashyapa way back in 5th century AD. It is one of the word heritage sites and the oldest landscaped garden in Asia. On top of the rock are the remains of the king’s palace, granite throne and other buildings. Source: Sri Lanka Tour And Holidays

The Sugarloaf Mountain is a massive quartz and granite monolith, situated in the Guanabara Bay in Rio De Janeiro, Brazil. It is the second most iconic place to visit in Rio de Janeiro (after the statue of Christ the Redeemer) since it provides an amazing view at a total height of 396 meter (1,299 ft) above sea level.