Top 12 Things To Do In Salvador 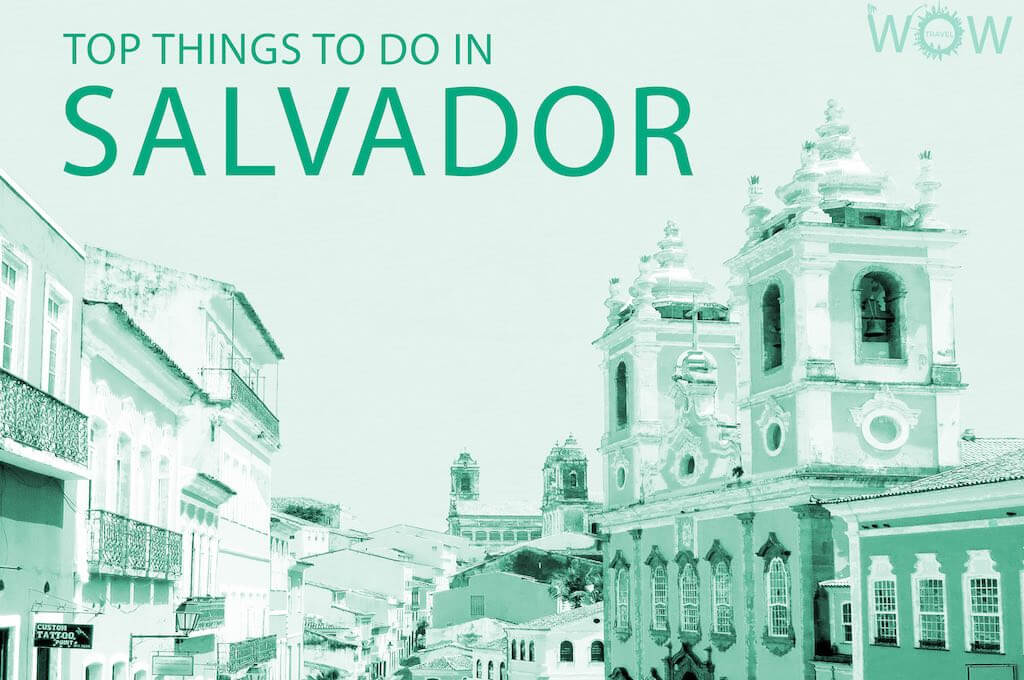 Sao Salvador da Bahia de Todos os Santos or simply Salvador is the capital of Bahia in Brazil. It was the first capital of Brazil, founded in 1549 by the Portuguese and continued to be the capital until 1763. The colonial influences are evident in this city which is one of the oldest colonial cities in the Americas. Salvador used to be the main port for slaves arriving from Africa. To this day a large part of the African culture is still preserved in the music, food, dance, and religion. There are plenty of attractions in Salvador to keep you busy, especially in the Historic Center where most of the buildings have been listed as UNESCO World Heritage Sites. The gilded churches that the city is so famous for are definitely worth visiting.
[booking_product_helper shortname=”salvador”]

The Historic Center of Salvador also known as Pelourinho is situated in the heart of Cidade Alta – the Upper Town of Salvador. This UNESCO World Heritage site is a fine blend of 17th and 18th-century colonial buildings. The impressive European architecture of the buildings which has withstood the test of time is a big attraction for tourists. There are several noteworthy buildings in the area like the City Museum, Predio do Senac (school of gastronomy) and Casa de Benin which are worth visiting.

This landmark is one of the many elevators that link the upper and lower towns of Salvador. The freestanding Art Deco elevator was built in 1930 and links the harbor area of Praca Cairu with the historic town of Praca Tome Souza. The Jesuits installed the first manual elevator about 1610 which was used to transport goods and passengers.  An iron structure with clanking steam elevators replaced the rope and pulley elevator in 1868. An electric system was finally installed in 1928. When on the elevator, you can get a fantastic view of the harbor and the lower town from the terrace on the upper plaza.

The spectacular church located in the historical center of Salvador is one of the most decorated churches in the region. The church which was built between 1708 and 1750 has a mix of Baroque and Mannerist styles. The sacristy of the church which dates back to 1694 is considered ‘Brazil’s most exquisite.’ What draws visitors to the church is the inner decoration which was mainly executed in the 18th century. The golden sculpted gilt woodwork which adorns all the inside surfaces like the ceilings, walls, and pillars is spectacular. Another standout attraction of the church is the azulejo panels (painted tin-glazed ceramic tilework).

A boat ride from Salvador will take you to the Isle of the Friars (Ilha dos Frades ), located in the middle of the ‘Baia de Todos os Santos.’ The island which is shaped like a fifteen-pointed star is only six kilometers long and has some breathtaking landscapes, waterfalls, lakes, mountains, and beaches. Legend has it that the island got its name from the two priests who were kidnapped by the natives when they tried to convert them. There’s plenty to do on this island from marveling at the historical buildings to swimming in crystalline waters and walking some beautiful trails. There are also plenty of restaurants, bars, and inns.

The Church of the Third Order of Our Lady of the Rosary of the Black People is a UNESCO World Heritage Site, located in the Historic Center of Salvador. The 18th-century church was built through funds raised by the Brotherhood of Our Lady of the Rosary. Membership to the Brotherhood was strictly limited to Africans born south of the Equator but when slavery was abolished in Brazil, membership became open to all Brazilians of African descent. It took almost a century to build the church as the poor members of the brotherhood helped build the church in their free time. The contrasting styles of the church reflect the time gap between its beginning and completion. Catholic masses with an African style are still held here every Tuesday.

This UNESCO World Heritage Site is one of the oldest palaces in Brazil. Dating back to 1549, the palace was the former seat of the government. It was built by the first governor-general of Brazil and was initially the center of administration. Before it was renovated in 1900, the palace had been used as military barracks and also a prison. The bombing of the building in 1912 resulted in the complete destruction of its collection of rare books. The palace houses a small museum today.

The Porto da Barra beach is located at the entrance of the Bay of All Saints (Baia de Todos os Santos) and is one of the few beaches in Brazil to face west. Due to its geographical location, the water is quite calm and a great place for swimming, kayaking, paddle boarding, and other water sports. Some spectacular sunsets can be experienced at this extremely popular beach. Porto da Barra was where the first Europeans to Bahia settled and the small colonial fort at one end of the beach is a reflection of Salvador’s colonial history.

The Mercado Modelo is a good place to visit if you’re looking for a great souvenir. There are plenty of shops inside selling everything from local handmade art to clothes, shoes, jewelry, and woodwork. You can also enjoy a traditional meal or a drink at restaurants and bars inside and outside. The market was once the Customs House where slaves were supposedly housed before they were sold. The lower level of the market, which is where the history of the place lies, is now closed to the public.

The Barra Lighthouse which is located at the Santo Antonio Fort is considered to be another iconic landmark of Salvador. The lighthouse rises prominently from the fort and is clearly visible from Barra Beach. The lighthouse is a great place to catch the perfect sunset. Visitors are allowed to climb to the top of the 22-meter tower to view the light being turned on at night and off in the morning by the lighthouse keeper. The lighthouse was inaugurated in 1698 after a Portuguese ship, Sacramento sank in a sandbank. The Nautical Museum of Bahia is also located on the same premises.

The most famous Catholic church of Salvador, the Church of Nosso Senhor do Bonfim (Our Lord of the Good End) was built in the 18th century in the Rococo style. The church which sits on a hill is the Cathedral of the Diocese of Bonfim and is one of the most revered churches in the region. One of Salvador’s famous celebrations, Fest do Senhor do Bonfim is held here every January. The celebrations go on for ten days and culminate with a mass in the Bonfim Church. A notable feature of the church is the painted wooden ceiling created in the early 19th century by Franco Velasco. The painting shows people thanking Our Lord of Bonfim for surviving a shipwreck.

The Sao Marcelo Fort which is popularly known as Forte do Mar, is located on a small stretch of land in the Bay of All Saints. It forms one of the two forts in Brazil which are surrounded by water. The fort which was completed in 1623 became one of the main targets during the Dutch-Portuguese War in 1624. The fort was reconstructed in 1650 and 1728 where a turret and wall were subsequently added. The fort was only opened to the public in 2006 after a massive restoration. You can take a boat to the fort from the terminal near Mercado Modelo.

The Catedral Basilica de Salvador is a beautiful example of Jesuit architecture. The church which was built between 1604 and 1656 was originally the church of the Jesuit college but is now the seat of the Archbishop of Salvador. The former Jesuit church became the city’s cathedral in 1758 after the Jesuits were expelled from Brazil. The Baroque style sacristy which dates back to 1694 has three altars richly decorated with Baroque furniture. The walls of the sacristy are covered by 17th -century Portuguese azulejos.