The 11 Most Beautiful Places In Yemen 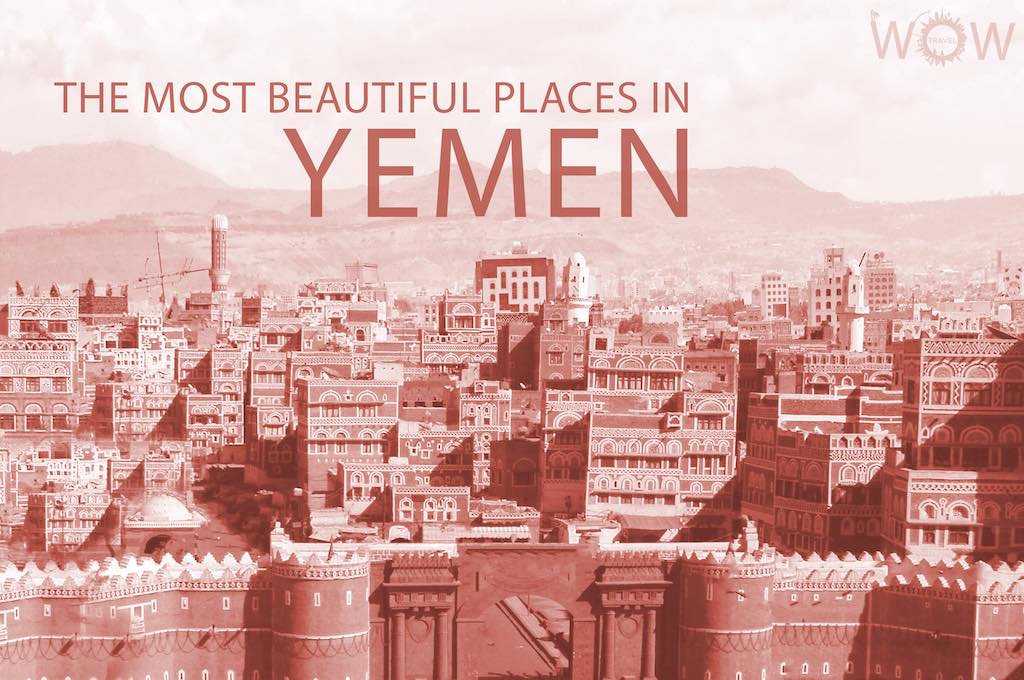 One of the most embattled regions of the Middle East is the country of Yemen, located at the southern end of the Arabian Peninsula. From fighting an internal war against poverty and corruption to an al-Qaeda insurgency and Houthi rebellion, and a cholera epidemic, Yemen has endured a lot over the past few decades. However, despite the problems that continue to besiege its citizens, Yemen has so much more to offer. Believed to be one of the oldest inhabited regions of the world, Yemen’s rich heritage is visible in its amazing architectural structures, like its walled cities, ancient high-rise buildings, old mosques, and charming homes. Besides the manmade structures that are so characteristic of the region, the diverse landscapes with river valleys, mountainous terrains and beautiful coastlines make Yemen one of the most beautiful countries in the Middle East region of Asia.

One of the most isolated landforms of continental origin on earth is the beautiful Socotra Island, located between the Guardarfaui Channel and the Arabian Sea. The remoteness of the island has resulted in the growth of various species like the ‘dragon’s blood tree,’ pink desert roses and a rare species of frankincense, which are endemic to the island and found nowhere else on earth. This is probably one of the reasons why the island has been described as ‘the most alien-looking place on Earth.’ Some people also believe that the island with its biological diversity and isolation was the original Garden of Eden. Whatever the theory of its origin there can be no doubt that it is one of the most beautiful places in Yemen with its varying landscapes. From the beautiful white sands of the surrounding beaches to the rugged Hajhir mountains and the golden sand dunes, there is much that will astound a visitor to Socotra.

Sitting at an elevation of 2,300 meters, the capital of Yemen is one of the highest capital cities in the world. The beautiful Old City of Sana’a with its unique architecture of patterned multi-storeyed buildings, ancient mosques and a variety of hammams (bathing houses) is a UNESCO World Heritage Site and an area definitely worth visiting. However, the wars and uprising over the past few years have resulted in a lot of damage to the historic area of Sana’a.

The largest mosque in Yemen is the stunning Al Saleh Mosque renamed ‘The People’s Mosque,’ located on the southern outskirts of the city. The sprawling mosque is a gorgeous blend of Yemeni architecture and Islamic styles and a marvel of modern architecture. It was inaugurated in 2008 and is open to people of all faiths. There is a huge security presence outside the mosque and visitors go through a rigorous inspection.

This region is named after the Haraz mountains in which it is located and is a spectacular site to visit with its terraced lands and medieval villages built like fortresses at the edge of high cliffs. These high settlements are built like castles integrated into the landscape with their agricultural lands below. They have thankfully remained largely untouched by the wars that have plagued Yemen in the recent past. One of the most beautiful and well preserved medieval towns in the region is Al Hajjarah, clinging to the edge of the mountainside and a popular base for trekkers. Due to the current situation in Yemen, special permits are required to visit the place.

One of the most beautiful villages in the Sana’a region is the well preserved medieval village of Thula. An intact wall erect at the foot of a magnificent pink sandstone cliff surrounds the city. There are 26 towers and 9 gates along the 2000m long wall of the city. Narrow alleyways meander through the old three to five-story ocher sandstone houses built close together. About 600 houses built in the same characteristic decor and style give this city its unique character.

The historic hilltop city of Kawkaben located on the north-western part of Yemen was once a traveler’s delight with historic mosques and houses blending in with the stunning landscape. Unlike the other villages in the Haraz mountains, the beautiful village has not been spared from the devastation of the war. It has been the target of multiple airstrikes which has resulted in grave devastation to the area. However, the resilient spirit of its inhabitants has pushed them to begin rebuilding the village. Sitting at an altitude of 3,000m, the walled city was once home to a Jewish community until the mid-20th century, with its most famous inhabitant being the renowned Jewish poet, Zechariah Dhahiri.

Built on top of a tall natural rock spire, the Dar al Hajar palace looks like a place straight out of fantasy land. This former palace located about 15kms from Sana’a was built in the 1930s by Yahya Muhammad Hamid ed-Din over a previous structure that was built in 1786. The impressive five-story palace with three stories above the rock and two built into the rock has now been transformed into a museum. Although the views from the inside are impressive, what really stands out is the architecture of the exterior.

Located in Seiyun in the historical Hadhramaut region, the grand Sultan’s palace is the most distinctive landmark in the area. Built in the 1920s on the site of a previous fort, the palace was occupied by the Sultan of Kathiri until 1967. Today it serves as a museum of archaeology and ethnography.

This gorgeous limestone footbridge constructed over a deep gorge near the mountain village of Shehara, about 140km north of Sana’a was constructed in the 17th century. It was built by a local lord to connect two villages located on either side of the Jabal al Emir and Jabal al Faish. Aptly nicknamed the Bridge of Sighs, the 20m long bridge is suspended 200m above a canyon. Besides the spectacular views of the surroundings, the bridge itself is an engineering masterpiece that took about 3 years to complete.

Known as the ‘Manhattan of the desert,’ this amazing UNESCO World Heritage town with its 16th-century mud buildings is a spectacular site to visit. Long before the skyscrapers of New York and Chicago came into existence, the inhabitants of Shibham made their tall mud skyscrapers. 500 buildings ranging from five to ten stories high that were solely constructed from handmade mud bricks stand side by side, surrounded by a 500-year-old fortified wall. Two palaces belonging to the Sultan of the region and seven mosques are also located within this walled city.