Top 12 Things To Do In Afghanistan 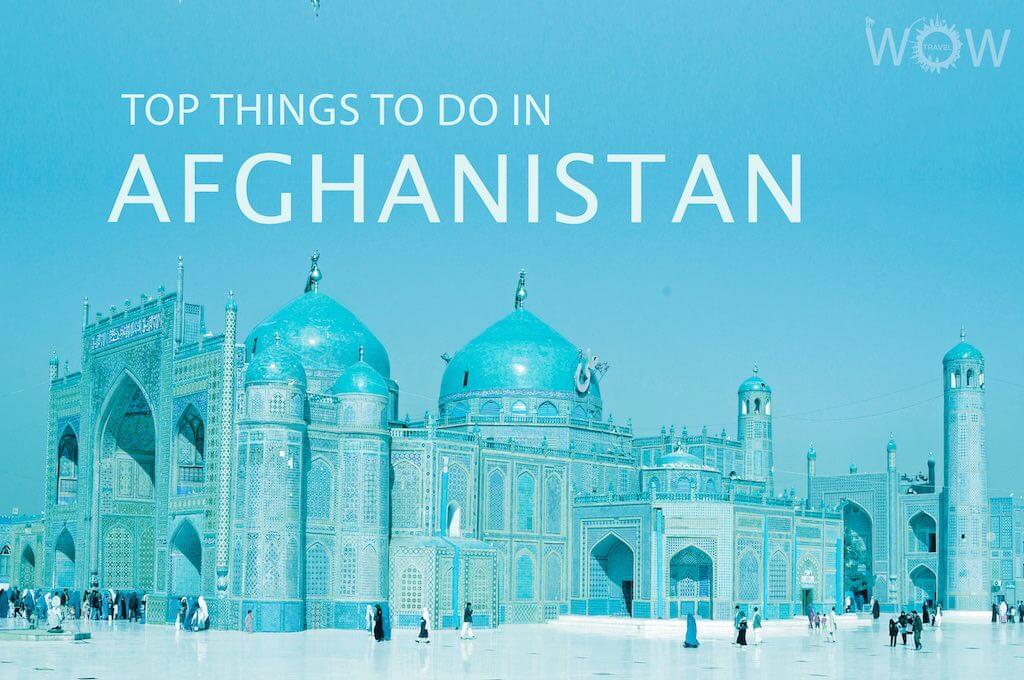 The naturally beautiful land of Afghanistan has been embattled by invasions and conflict throughout its history. From Alexander the Great to the Mauryas, Mughals and more recently British, Soviets and Americans, the country has continuously been besieged by military campaigns. However, the civil war that followed the Soviet withdrawal has pushed the development of the country quite far back. In recent years the relative stability in the region has seen a spurt of development, especially in the capital city Kabul. The government is working hard to shake off its war-torn image and restore its past glory. Although many of its monuments have been wiped out during the unceasing wars, many structures from its past still stand tall and are worth visiting.

Afghanistan’s capital and largest city has gradually limped back from the horrid scars of its war-torn past. Despite being a prime target of terrorism, the city is developing at a rapid pace with new high rises, fancy restaurants and refurbished bazaars making their appearance. One of the highest capital cities in the world, Kabul with its strategic location along the trade routes of South and Central Asia is a heady mix of the old vs the new. The city was once the mecca for western hippies but apart from the ‘poppy fields,’ that part of its past has been obliterated by the civil war that took over the country for many years. Today the historic city is characterized by gardens and busy bazaars. Although a lot of the old architecture of the city was destroyed by consistent wars, remnants of its once glorious past are still visible.

The last resting place of the Mughal emperor Babur is a sprawling 27-acre green space in the city of Kabul. The gardens were laid out in the 16th century on the orders of Babur whose tomb now overlooks the work of his creation. His uncovered grave is in accordance with his wishes to be buried under the open sky. Through the subsequent wars, the gardens fell into disrepair but have since been painstakingly restored and to their former glory.

Also known as the Kabul Museum, this museum which was once considered to be the world’s finest has undergone a massive expansion and restoration. Opened in 1919, it once housed the most important collection of Central Asia with more than 100,000 exhibits but during the civil war, most of its treasures were looted and sold. In 2001, along with the destruction of the Bamyan Buddhas, most of the statues and image-bearing images were smashed by hammer-wielding soldiers. Since 2007 an international drive to recover the stolen artifacts has resulted in over 8,000 artifacts being returned to the museum, including the renowned Begram ivories from the 1st century.

Qargha lake is a serene reservoir on the outskirts of Kabul that was developed in the 1950s for recreational purposes. A popular picnic spot, especially for trout fishing and boating, the lake boasts of an upscale lakeside hotel and a 9-hole golf course at the extreme periphery. There are plenty of restaurants and cafes across the road from the lake. Surrounded by mountains which are reflected in the clear waters of the lake, its an ideal spot for a great photograph.

Around 150 graves lie in this cemetery in Kabul which was built in 1879 by the British Army. Enclosed within high walls, the cemetery is one of the few foreign historical landmarks to have survived the Taliban destruction. The original headstones from the British Army are now mounted on the southern wall. One of the most famous persons laid to rest here is Aurel Stein, the renowned Silk Road archaeologist. His fascination with Alexander’s campaign saw him plead with the Afghan authorities on several occasions for permission to carry out excavations but his plea was rejected time and again on account of his British citizenship. Ironically he was granted permission at the age of 82 but died a few days after arriving in Kabul. The caretaker of the cemetery has held onto this position for over 30 years and is more than willing to regale visitors with tales of his tryst with Taliban.

Known to most people as the Blue Mosque, this iconic landmark in Mazar-i-Sharif was built in the 15th century. However, the blue tiling that covers the shrine does not date back to that time but is a more modern addition. Pilgrims from all over the country flock to the shrine which purportedly contains Ali’s remains which were carried here by Ali’s followers. Muslim tradition, however, believes that Ali’s remains lie in Najaf in Iraq near the place where he was murdered. Although the building is off-limits to non-Muslims, one can enjoy some spectacular views of the building from the adjoining park.

About 16km southwest of the center of Kabul stands the grand Darul Aman Palace, renovated and reopened in August 2019, to celebrate 100 years of Afghan Independence. Construction on the imposing neoclassical structure began in the early 1920s on the orders of King Amanullah Khan. The palace which was designed by German engineer Walter Harten was indicative of the close ties between Afghanistan and Germany. The building was never used for its intended design as Amanullah was ousted from power and his reforms curbed. A fire in 1968 gutted the building but it was restored and later used as the Ministry of Defense. In the 1990s the building was once again the target of heavy shelling which left it an empty shell.

Located in the center of Herat, overlooking the Old City is the Citadel of Herat, dating back to 330 BC. The citadel was probably built over the foundations of a fort that Alexander the Great had erected when he arrived with his army in Afghanistan. It has been rebuilt many times over the centuries and has been used by many empires over the centuries. The present structure can be attributed to Shah Rukh in the 15th century. Most of the tiling that once adorned the castle has been lost to the ravages to time. The Citadel was almost lost forever in the 1950s when the army commander of Herat wanted it completely demolished. The timely intervention from King Zahir Shah saved the structure from complete annihilation. The citadel underwent a huge restoration in the 1970s and another one between 2006 and 2011. The National Museum of Herat is located within the citadel.

One of Afghanistan’s most beautiful Islamic buildings is the over 800-year-old Friday Mosque built by the Ghurids. It underwent several transformations under various dynasties to acquire its grand look. However, much of the mosque was destroyed after the Anglo-Afghan wars. A massive renovation carried out in the 20th century brought the mosque to its present glory. The tiles for the mosque were created in the tile workshop attached to the mosque. The mosaic work within the mosque is highly commendable; a mix of traditional and modern to give the mosque its distinctive character.

This breathtakingly beautiful national park located approximately 75km from the city of Bamyan, is a photographer’s delight. Afghanistan’s first national park has been described as the Grand Canyon of Afghanistan because of its beautiful canyon comprising of a series of six natural lakes. The deep blue lakes are separated by natural travertine dams that were created by the carbon dioxide-rich water which oozed out of the faults and fractures. The park attracts thousands of tourists during the summer.

The huge empty niches in the sandstone cliffs is a tragic reminder of the beautiful history of the region that was wiped out forever by zealots in 2001. The 6th-century monumental statues of Gautama Buddha standing grandly at 53m and 35m were blown up by the Taliban over a few days. However, it wasn’t the first time that the statues were targeted. Between the 13th to the 20th centuries, various Mughal emperors from Babur to Aurangzeb tried to destroy them with heavy artillery but failed. The destruction of the Buddhas unearthed 50 Buddhist caves, 12 which had wall paintings within them. The site where the statues once stood is still a popular tourist attraction as there is much more to discover about the region’s Buddhist past from the honeycomb of monastic cells and grottoes that surround it.

This narrow 350km strip situated between the Pamir Mountains and the Karakoram range, borders China and separates Pakistan from Tajikistan. The Wakhan Corridor was formed in 1893 during the creation of the Durand Line. It is a beautiful terrain with vivid blue lakes, rugged mountains and lush meadows which lie snow-covered for six months of the year. Due to its remoteness, this region has been untouched by the conflicts that have plagued most of Afghanistan. It is home to a remote Kyrgyz people who traveled down from their homeland and were stranded when the corridor was created.