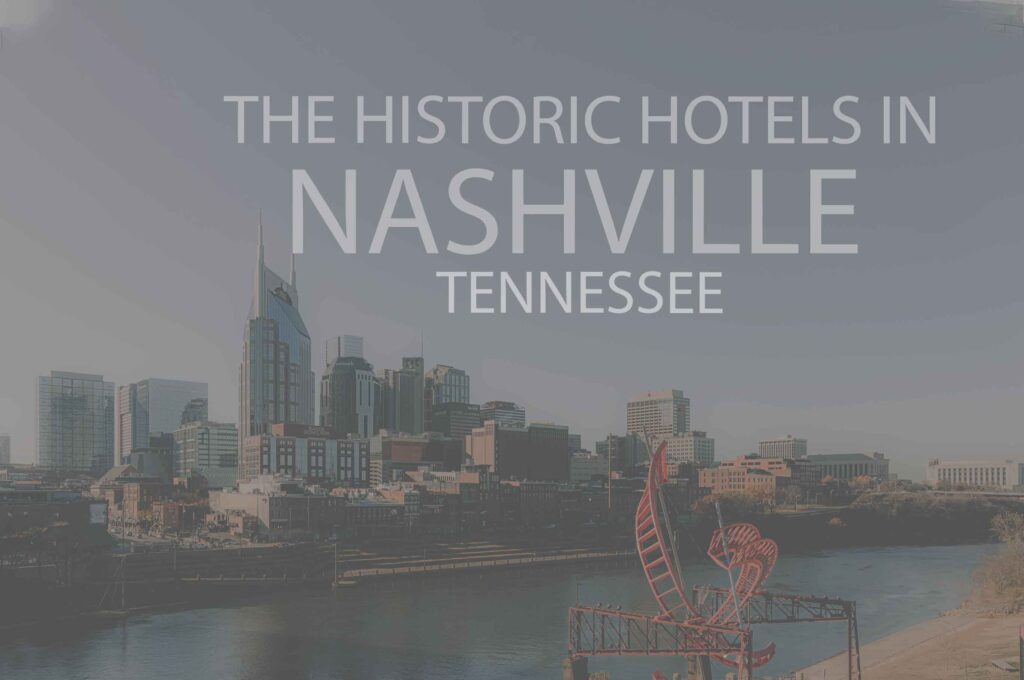 Nashville, also known as the Music City, is one of Tennessee’s most fancied travel destinations. Of course, many know this city because of its music. However, did you know that Nashville is also rich in history? It boasts plenty of impressive architecture that’ll awe travelers. This city is nothing short of inspiring, from art deco buildings to hundreds-year-old churches. To go back in time, why don’t you consider staying at one of the best historic hotels in Nashville, Tennessee? There are many Nashville, TN, historic hotels to choose from, and they’ll improve your experience in the city. Whether you prefer old-school glamor or a mix of the old and the new, we’re sure you’ll love our recommendations! Have fun browsing through our list and choosing which hotel you want to book for your upcoming city break!

Set in the middle of 4th Avenue North and Printer’s Alley, the Dream Nashville is a 12-story boutique hotel in Nashville that manages to blend elements from two historical buildings with contemporary facilities, creating a one-of-a-kind hotel. One of the buildings used to house Climax Saloon, and the other one housed the Utopia Hotel. Built in 1887, the saloon’s facade is still well preserved. Meanwhile, the Utopia Hotel, which was constructed in 1890, was renovated to include 25 guestrooms.

Providing rich heritage, Dream Nashville is now seen as one of the best historic hotels in Nashville, Tennessee. What makes it extremely popular, aside from its art-deco-inspired rooms, is its location. Since it’s only a short stroll away from downtown, guests will never be too far away from the city’s top attractions. Not to mention, it boasts plenty of luxury amenities, like multiple dining options and a state-of-the-art fitness center. However, if you’re on a limited budget, you might want to check out these cheap hotels in Nashville instead!

Originally built in the year 1909, Hotel Indigo Nashville is housed in a former bank building. It’s themed in honor of the nearby historic Printers’ Alley district. To turn a bank into a hotel, the interior of the property was fully renovated. An existing corridor was relocated, a new stairwell was constructed, and a former bank vault was made into housekeeping storage. The result is a stunning, 15-story boutique hotel that’s loved by many.

Despite undergoing a huge renovation, this hotel still boasts some of the original building’s historic features. There are 97 guestrooms in total, and many of them still have the original terrazzo floors. What’s more, as one of the best historic hotels in Nashville, Tennessee, it also boasts an art-gallery style entrance that enchants guests right after they enter the hotel.

With 225 years of history, the Belle Air Mansion and Inn is another great addition to our list of the best Nashville, TN, historic hotels. A few miles away from downtown, this property was built in 1832, and it’s one of Nashville’s very few remaining Greek Revival antebellum mansions. In 1838, the mansion was expanded with the addition of one-story wings and Greek Revival ornamentation. Then, in 1971, it was added to the National Register of Historic Places.

Moving forward to 2014, Belle Air was named one of Nashville’s most endangered properties. It was then listed for sale, and many developers were interested in purchasing the property. Lewis and Connie James are the ones who bought the property in 2016, and they began a long but exciting journey to restore the mansion to its former glory. Finally, the mansion reopened in 2019 and has welcomed guests since then.

Constructed in the year 1900, the 21c Museum Hotel Nashville was originally the Gray & Dudley Hardware Company. The company was a combination of two well-known local stores, offering everything from premium building supplies to kid-friendly toys literally. Then, it quickly rose to fame and became the leading business in the city. After an extensive renovation, the former storefront reopened as the 21c Museum Nashville in 2017.

As you can guess from the name, this lodging is both a modern art museum and a hotel. Today, it’s seen as one of the best historic hotels in downtown Nashville, Tennessee. Thanks to its superb location, guests will be only a few blocks away from the city’s most popular attractions. Moreover, the interiors are a perfect blend of the old and the new, making it a hip option for youngsters as well.

Many consider The Russell as the unique boutique hotel in Nashville, and we totally agree! Housed in a 115-year-old church and set in one of the city’s most fun neighborhoods, it’s also named one of the best historic hotels in Nashville, Tennessee. Built-in 1904, this building has been reconstructed several times. However, it wasn’t until 2019 that it started operating as a hotel. Once you enter the hotel, you can easily tell it is a former church. That’s because it still features those stained-glass windows, cathedral ceilings, and church pews.

What differentiates this hotel from other Nashville, TN, historic hotels is its lobby! There, you’ll be able to find reading areas and a podcasting studio. When it comes to the guestrooms, this historic hotel in Nashville, TN, has 23 unique rooms for you to choose from. Most of them also feature old brick walls, which add to your experience.

According to the Davidson County Register of Deeds, this hotel changed hands multiple times between 1835 and 1865. The property was then purchased in 2015, and renovation began in early 2016. The Germantown Inn that we know today began operating in December 2016, offering 10 homey suites which are named after US presidents.

Noelle, which was built in 1929, is seen by many as one of the top historic hotels in Nashville, Tennessee. It was opened at a time when the number of new hotels in Nashville was rising like crazy. When it was erected, it was Nashville’s tallest building, housing 250 high-end guestrooms. At that time, it was also considered the city’s smartest hotel, boasting state-of-the-art technologies. For the first 40 years, the upper floors of the building acted as a hotel, and the lower floors were used as public spaces.

Like other Nashville, TN, historic hotels, this property has accommodated many popular icons like Eleanor Roosevelt, Babe Ruth, Jayne Mansfield, and many others. Then, in 1972 the hotel closed its doors. The property was then purchased by Rockbridge Capital in 2014, returning the building to its original use as a hotel. With the hotel’s rebirth, they decided to rename the hotel by excluding the word “hotel” and simply naming it “Noelle.”

The next hotel that makes a great addition to our list of the top historic hotels in Nashville, Tennessee, is none other than the Fairlane Hotel Nashville, an Original by Oliver Hotels. Set in downtown Nashville, this property is only a stroll away from some of the city’s top attractions, including Broadway, the Gulch, and others. While there are many awesome Nashville, TN, historic hotels, this one is a standout thanks to its 1970s retro feel.

Furthermore, this 12-story hotel was built in 1972 as an old bank headquarters. However, you can still find its mid-century architectural details today! The terrazzo flooring, brass details, wood paneling, and random signature pieces will definitely satisfy history buffs. Not to mention, no two rooms look the same! Named one of the top historic hotels in downtown Nashville, the hotel also offers luxury service and amenities. You’ll be taken care of and treated like royalty from sunrise to sunset!

Holston House Nashville, in The Unbound Collection by Hyatt

There are many Nashville, TN, historic hotels, but the Holston House Nashville in The Unbound Collection by Hyatt is a standout. This 191-room boutique hotel occupies the historic 1920s James Robertson Hotel. The building was originally created by local architects Marr & Holman in 1929. What’s more, it has been a part of the National Register of Historic Places since 1984. Once you enter the hotel, you’ll be wowed by all the period details. You’ll witness brass hexagon lights, ornate exterior columns, and more.

As one of the top historic hotels in Nashville, Tennessee, guests are also encouraged to spend some time in the lobby to take a look at the vintage photos of Johnny Cash and other music icons of Nashville. After that, you can go to the rooftop and admire the surrounding views. With its rich history, strategic downtown location, and top-notch amenities, this hotel is surely a great addition to the top historic hotels in downtown Nashville.

The Union Station Nashville Yards Autograph Collection is one of the most legendary buildings that has been gracing the city’s skyline for such a long time. Named one of downtown Nashville’s most popular historic hotels, this hotel won’t disappoint you. In 1900, this pet-friendly hotel in Nashville was originally built as a railway station. Thanks to its magnificent Gothic design, the Union Station was deemed an architectural marvel in its day. The hotel has recently undergone a big renovation, adding some modern facilities to make it an even better accommodation.

What’s amazing is that its historical features are still present, including the Richardsonian-Romanesque design, the clock tower that features a statue of Mercury, the 65-foot barrel-vaulted ceiling, marble floors, and many more. Today, this hotel isn’t just ranked as one of the top historic hotels in Nashville, Tennessee, but it’s also a member of the Historic Hotels of America. Best of all, its downtown location means guests can easily reach some of the best local attractions.

With plenty of awards and accolades in its arsenal, The Hermitage Hotel is easily our top pick on this list of best historic hotels in Nashville, Tennessee. Opened back in 1910, this lavish hotel was the city’s first million-dollar hotel. Like many other historic hotels in downtown Nashville, this accommodation has been the go-to choice for those looking for a little glitz for God knows how long. What’s more, the building is said to be fireproof, noise-proof, and dustproof. No wonder it has been able to operate for over a century. Throughout the years, big names have also spent their nights here. We’re talking about Al Capone, Gene Autry, and seven US presidents!

Moreover, this historic hotel in Nashville, TN, was also the headquarters for the suffragette movement in 1920, which gave women the right to vote. In 2003, the hotel underwent a huge renovation. It then reopened and showcased restored architectural details and modern amenities. Even today, you can still feel the hotel’s vintage charm. The spacious guestrooms are fitted with old-school style furniture, and the grand lobby is also worth a look-see. And because of its institutional history, it’s named a National Historic Landmark. By the way, have we told you it’s also considered one of the best family hotels in Nashville?

Recommended Things To Do in Nashville, Tennessee