Top 12 Things To Do In Samoa 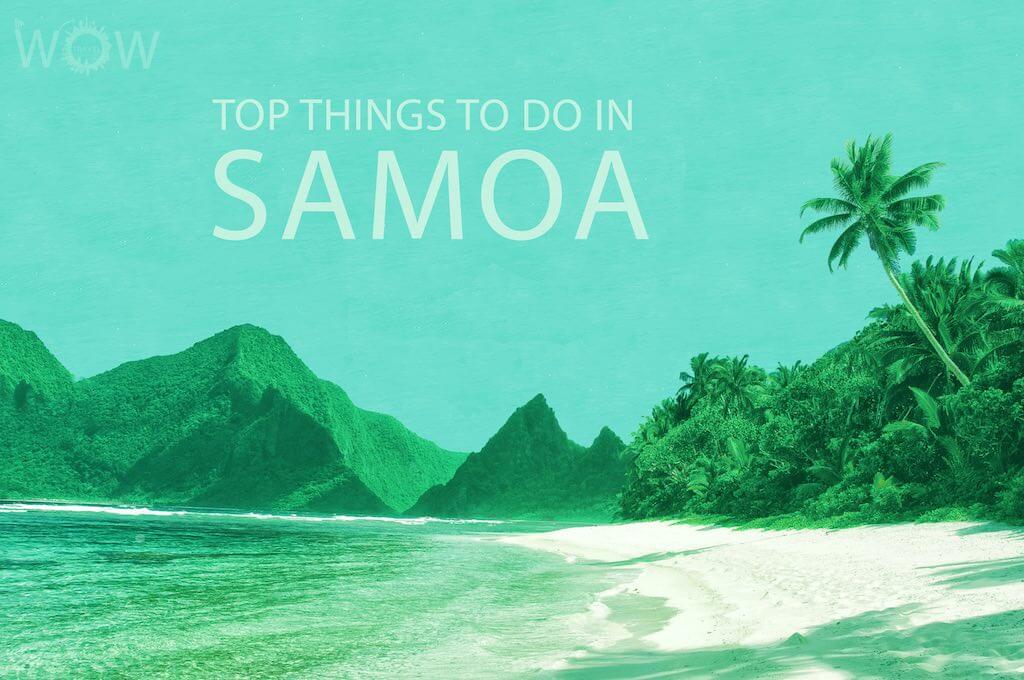 The beautiful Pacific country of Samoa is probably one of the most authentic and traditional of all the Pacific islands. Although the missionaries of the early 19th century influenced most of the Pacific islands including Samoa, (evident from the churches in the region), the people have clung to their local customs and the traditional way of life. The ‘Faá Samoa’ or the traditional Samoan way plays a huge role in every aspect of people’s lives. Relatively untouched by large scale tourism, the natural vistas of the region are picture-perfect. The sparkling waters of the natural pools and waterfalls, some hidden amongst lush green vegetation, combined with the breathtaking reefs and warmth of the people make Samoa one of the more special places to visit in Oceania.

The capital of Samoa is located on Upolu, the second largest island. Although exploring a city may not be on your list of things to do on a stunning Pacific island, the colonial-style capital is worth a look. Apia is a good place to use as your base as it’s not too far away from the main attractions. A visit to the Samoa Cultural Village should definitely be on your itinerary as it will give you a deeper insight into the Samoan way of life. The capital city has plenty of options for accommodations and lots of facilities. If you’re in Apia then a visit to the ‘Marketi Fou’ should also be on your cards. The market is a great place to experience the local culture while looking out for a good souvenir.

Cathedral of Immaculate Conception of Mary

The Samoan people are extremely religious and evidence of this can be seen in the number of churches that dot the two main islands. One of the most beautiful is the Cathedral of Immaculate Conception located in Apia. This breathtakingly beautiful cathedral is one of the landmarks of Apia, overlooking the beautiful harbor. The current church which was rebuilt on the site of the original cathedral dating from 1857, suffered extensive damage in the 2009 earthquake. The newly renovated church is beautiful inside and out. From the timber-crafted ceilings to the stunning stained glass windows and huge interiors, the church is a photographer’s delight.

High tide is the best time to marvel at this shallow reef located between the harbor of Apia and Vaiala Beach. The standout feature of this protected marine reserve is a deep coral-encrusted hole that is alive with marine life. It’s a good idea to wear reef shoes or flippers to avoid damaging the coral. The azure lagoons of the surrounding reefs are perfect for diving.

Five years prior to his death, the renowned author Robert Louis Stevenson moved to live in Samoa with his wife. His former residence was turned into a museum in 1994 on the centenary of the Scotsman’s death anniversary. A forty-minute guided tour will take you through rooms filled with antiques and old family photographs. Adjacent to the museum at the top of Mt Vaea is the author’s final resting place. The path, known as the ‘Road of Loving Hearts’ will take you through a lush forest to his tomb. It is a 30-45 minute walk to the tomb so it’s best done early in the morning or in the late afternoon to avoid the heat. Once at the top, you’ll be rewarded for your effort by a stunning panoramic view of the surroundings.

If you want to experience a natural water slide this is the place to try it. Located at Seesee in Faleata District about 6km from central Apia, the Papaseea Sliding Rock is a popular spot to relive your childhood. You can skim down the natural rock slides into cool waterholes below. The biggest slide is a 5-meter high rock that has been weathered to such a smoothness that it is great fun to come whizzing down. There are also smaller slides for kids to enjoy. The slides may get a little dry in the summer but the pool below is still a good place for a dip.

One of the most pristine beaches in Samoa, Lalomanu situated on the east coast of Upolu island is not only a great place to relax but is also a feast for the eyes. The rich coral lagoons near the beach and the scenic wonders around, draw tourists to this popular paradise. The ocean around the beach is a protected marine reserve. Activities such as snorkeling and sea kayaks are available for a better view of these creatures of the sea. A little further north is the Namua Island where you can swim with the endangered turtles. You could also choose to stay at one of the beach fales run by the locals.

Located beneath the historic Methodist Chapel on the north coast of Upolu island, the natural freshwater pool outside the cave is another great place to cool off and capture some scenic moments. The cave is located at the Piulu Theological College about 45 minutes from Apia. The crystal clear waters of the spring pool around the cave originated from an old lava tube. You can swim your way to another cave through the first one.

This giant swimming hole located on the southeast coast of Upolu is another place that will cause you to whip out your camera in wonder. Surrounded by lush gardens, this natural saltwater pool is a sight not to be missed. Don’t be disappointed if you come across the smaller drier depression called To Le Sua first. The big giant trench is the highlight of your trip here. 20 odd meters below the surface you’ll see the magnificent blue of the pool which can be accessed via a wooden ladder. It’s perfectly safe to dive into the waters if you’re adventurous enough to take a chance. The pool is open from 8:30 in the morning and closes at 5 in the evening.

For a taste of the ‘real’ Samoa, you should head out to the island of Savaií. After Tahiti and New Zealand, Savaií is the third largest Polynesian island and the largest island in Samoa. The island is renowned for its pristine beaches, rich marine life, breathtaking scenery and simplistic way of life. There are lots of natural locations that are worth exploring on the island like the crater at Mt Matavanu and the Lava fields that it created after erupting in the early 20th century. Savaii has some great snorkeling and diving locations. A popular site for diving is the wreck of ‘Juno’ that was shipwrecked in 1881. The Central Savai’i Rainforest is rich in biodiversity and is home to most of the island’s native species of flora and fauna.

The blowholes located in the village of Taga on south-west Savaii will definitely leave you awestruck. They are without a doubt amongst some of the most spectacular sites on earth. The geyser-like explosions from these holes that shoot high up into the air are worth watching. This phenomenon is caused by strong waves that are pushed through a series of lava tubes at high pressure, creating fountains that shoot up every few seconds. For an extra fee, villagers will throw coconuts down the hole and watch as they shoot up like missiles in the air.

This fascinating geological expanse has a rather morbid and poignant history behind it. The volcanic eruption of Mt Matavanu in the early parts of the 20th century buried 5 villages under its molten lava. Evidence of this can be seen in the half-buried churches and lava mounds. A virgin grave, the burial place of a nun is also another prominent spot in the area as the grave was relatively untouched by the lava which encircled it.

Waterfalls of Upolu and Savaií

Samoa has quite a few picturesque waterfalls although these are not huge cascading falls but smaller quieter ones that end in beautiful pools below. The lovely Afu-Aau Falls also known as Olemoe falls are located on the island of Savaii on the southeastern side in a secluded jungle. These spring-fed falls cascade down to a 3-meter deep water hole which is extremely refreshing for a swim. The Sopo’aga falls in Eastern Upolu are much higher at 54m. They empty themselves into a stunning gorge below. The best point to view these falls is from a point above opposite the falls. Another popular waterfall for swimming is the Togitogiga Waterfall located in the village of Saleilua not too far from the O Le Pupu Pe National Park. In the past, the Togitogiga fall used to be the favored swimming spot for the great warriors of Samoa.