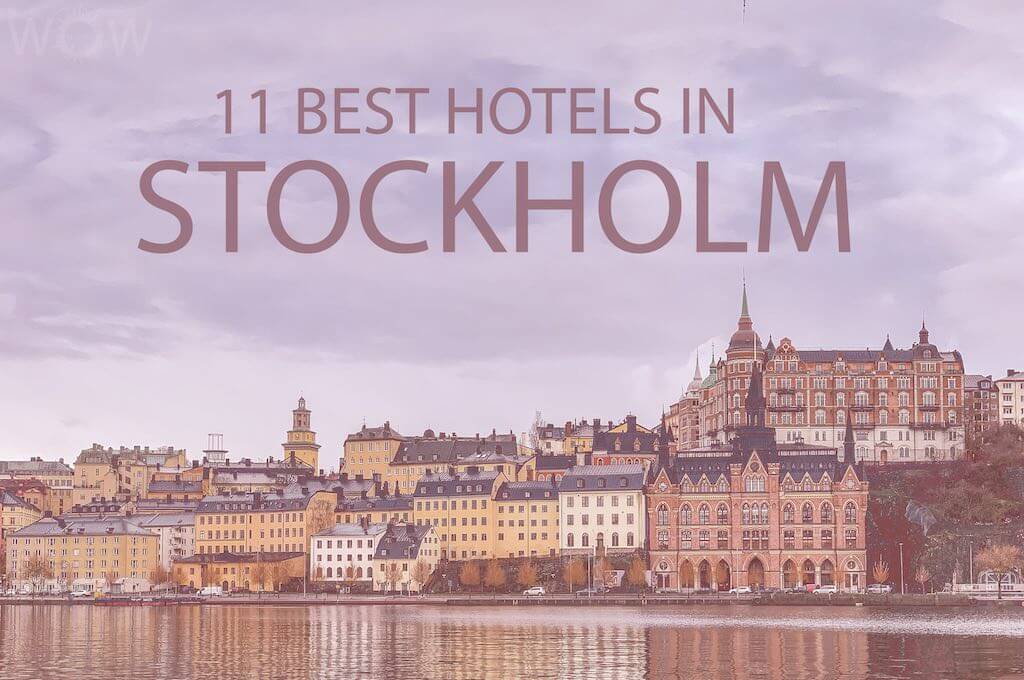 The capital of Sweden, Stockholm, is a city encompassed by multiple islands and has several bridges on the Balti Sea archipelago. The city has a lot to offer than just that. It’s one of the 17 safest cities in the world and is famous for its gastronomic delights, historic attractions, and the easygoing lifestyle. Because of the quality of life offered in the city, it is mirrored well with the residents of Stockholm and the trendy hotels. And all the best hotels in Stockholm mentioned in this list combine the hospitality, style, and the finesse of the Swedish culture to quench the thirst of even the most demanding guest.

Where to stay in Stockholm

It can be a daunting experience just to visit the Swedish capital for any first-timer. That said, it doesn’t make it any easy to know where exactly to stay in the city. Encompassed by 14 islands, Stockholm offers secluded beaches, lakes, and lush forests, and the best-in-class architectural attractions. If you’re into an alternative scene, Hornstull is your best choice. Gamla Stan is perfect if you want to be in the inner city; and Djurgården is a glorious spot if you’re more into the country escape. And the list of hotels below has a bit of everything that you can choose from, which will float anyone’s boat. Stockholm is a gay friendly city. On that note, we have a list of gay friendly hotels in Stockholm as well.

Nestled in a 1930s Art Deco building, Hotel Rival is owned by Benny Andersson – a member of the band, ABBA. This 4-star hotel in Stockholm, Sweden, features modern Art Deco style interiors, with cinematic elements like Polaroids, movie stills, and bold color palettes. The rooms are large and come with modern amenities. This includes an iPhone docking station so that you listen and sing to your favorite music out loud, even during your vacation. Along with this, the terrace at Hotel Rival is colorful and boasts views of the stunning city you’re vacationing at. Some of the major attractions nearby are Mariatorget Square, Monteliusvägen, and the Royal Palace. If you’re looking to stay at a boutique hotel, this accommodation is a popular choice.

An all-over red-hued Sandhamn Seglarhotell, also renowned as Yacht Hotel, is situated in the Stockholm county region. This region is famous for being the favorite summer getaway and sailing point for world travelers. The 19th-century luxury hotel features a bar, restaurant, and stunning rooms that strike a good balance between the traditional exterior and naval-themed interior, which makes it welcoming for all the guests. Along with offering a 24-hour front desk, there’s luggage storage for all the guests. Now, you don’t have to place your bags in the corner of the rooms anymore. After arriving at this hotel, one needs to relax before exploring the city. So, why not make use of the hotel sauna? You can thank us later.

This charming and one of the top hotels in Stockholm is established in 1470. This means the hotel is filled with ancient antiques, collectibles, and striking finishing touches. Sitting next to the Royal Palace in the Old Town of Stockholm, the hotel – Lady Hamilton Hotel, was named after Lady Emma Hamilton – mistress of Lord Nelson. The theme and interior decor of this hotel is inspired by nautical elements. Some of the rooms here feature vintage chandeliers, old paintings, and furniture to give guests the historic feel during their stay. There’s a cellar well from the 13th century that is now a plunge pool, which adds onto the entire experience of luxury. Enjoy afternoon tea at the in-house Bistro Emma, only during the weekends from the months between September to March.

If you’re seeking an experience of redefined luxury, then this is the place to be. Ett Hem is one of the top hotels in Stockholm. The 5-star luxury hotel exudes a homely environment that’ll let guests move around comfortably, while they relax either in the bedroom or living room, conservatory, or the kitchen. Because of its grandeur and exterior, the hotel camouflages itself well among the residential buildings, nestled just steps away from the city center. There’s an outdoor courtyard that features several seating areas, making it a great place to devour breakfasts in the summer. Either that or just relax in the evenings, soaking in the views with a glass of wine.

Self-acclaimed as the ‘modern designer hotel’, this is one of the best hotels in Stockholm, Sweden, and has the sleekest interiors both on the exteriors and interiors. All the rooms are individually designed by the leading architects from Sweden and the individuality is seen through the modern lighting and decor. The rooms at Hotel Birger Jarl come with basic amenities, including large windows that allow plenty of sunlight to seep in through. This helps you get a chunk load of Vitamin D for the day. You’ll also find the best of art and exhibitions by the contemporary artists that are featured in the lobby, and it keeps changing often. The in-house restaurant offers a variety of Swedish dishes, which is great for guests who haven’t tried it ever, and also for the guests who thoroughly love the cuisine.

Grand Hotel is the best hotel in Stockholm, and it’s as grand as it gets. Overlooking the waterfront, right opposite to the Old Town and the Royal Palace, the 5-star hotel is centrally located, making it an ideal destination to spend the vacation. Guests staying here have the option to choose between rooms that either boast waterfront, city, or courtyard views. The rooms are not the only best-selling point in this hotel. Try the in-house restaurants, as well. You’ll not regret it. You also get to have a tasty breakfast every morning, while you soak in the waterfront views. Now that’s what you’d call having ‘breakfast with a view.’

This top hotel in Stockholm sits in the center of the town and is just a couple of minutes’ walk from Stureplan and Strandvägen in the district of Östermalm. All the seafood lovers will thrive in an on-site restaurant that serves both European and coastal cuisine. This 5-star hotel is set in a former bank building. Hence the name… Bank Hotel. All the rooms here come with trendy interior and decor furnishings that give it an opulent look overall. Along with this, the world-class amenities offered in every room act as a cherry on top of the entire outlook of the room. There’s a coffeemaker available in all the rooms if you’re the type who can’t function without taking a sip from the hot cup of Joe. Also, there’s a terrace bar serving a variety of cocktails on the top floor that offers panoramic views of the city.

Looking for the best hotel in Stockholm that offers boho vibes? Then, Story Hotel in Stockholm, Sweden is your best bet. This ultra-modern, chic setting hotel is the accurate definition of ‘cool.’ And you can’t go wrong with this one. Located amidst one of the most snazzy shopping streets in the city, the hotel has quirky interior decor. For instance, it comes with doors that act as headboards, concrete walls, and other unique design elements. Along with this, it also features a self-check-in system. The total pricing of the room includes a breakfast buffet, too. And if you’re visiting in summer, consider yourself lucky as you get to enjoy dinner with drinks on the hotel’s terrace.

A nautical-themed hotel in Stockholm, Sweden, Victory Hotel is the sister hotel of Lady Hamilton, mentioned in the aforementioned list. The name of the hotel is inspired by a renowned ship, and because of that, the hotel rooms were named after Swedish captains. It’s a popular landmark in itself. You’ll get to check out the medieval Swedish ruins that are set in the wine cellar and also a place where once the largest lost treasure was discovered in the country. The restaurant on-site is known for serving both seafood and meat delectables, which are prepared from locally sourced organic produce. Guests can also take a plunge into the plunge pool or relax in the sauna, after exploring the nearby attractions.

The Hilton Stockholm Slussen Hotel in Stockholm, Sweden sits between Old Town and charming Södermalm. It boasts picturesque views of the Stockholm City Hall, Lake Mälaren, and the surrounding city. Make use of the sauna at the hotel that will give you the ultimate comfort and relaxation you seek throughout the day, after exploring the attractions. There are large windows in every room that give the best views and allows plenty of light through. If you want to spend your time chilling, reading a magazine, or drinking, the best place to do it is by the fireplace at the executive lounge. Add fuel to your system by devouring a tasty breakfast buffet at the hotel.

One of the best hotels in Stockholm, Sweden that defines simplicity is this – Nordic Light Hotel. The first look of the hotel reflects a sense of comfort and ease. This mostly appeals to all business travelers. But, that doesn’t mean it isn’t fit for other travelers. Every minor part of the hotel shows an emphasis on varieties of lighting, such as light therapy offered in the hotel rooms and conference halls, etc. Because of its convenient location, the hotel is easily accessible from both the train stations: Grand Central and Arlanda. There are multiple in-house restaurants and bars that guests can indulge in. These restaurants are famous for their Nordic cuisine, but with a modern twist. And the microbreweries serve experimental cocktails and beers.