Top 12 Things To Do In Stockholm 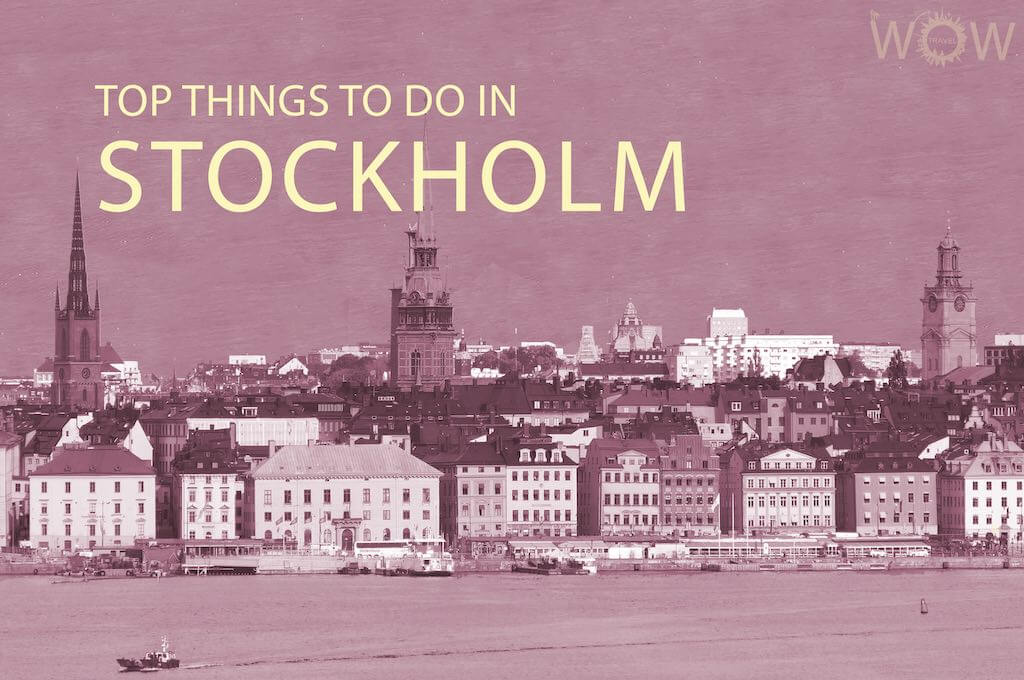 Sweden’s capital city, Stockholm, stretches along fourteen islands where Lake Malaren flows into the Baltic Sea, creating one of the most picturesque scenes; rightfully earning the city the sobriquet ‘Venice of the North.’ The beautiful landscapes and outstanding landmarks that form the city are a revelation of its rich cultural heritage. Gamla Stan, the city’s oldest district is right out of a fairy tale with its cobblestone streets, gabled buildings, and a stunning royal palace. Stockholm also has the distinction of being overcrowded with museums, with about 100 museums scattered throughout the city. In addition to its past opulence, the city is highly renowned for its sense of style where a good design takes precedence over everything else, right down to its crockery and lighting. Although the city spans fourteen islands, it is relatively easy to explore even on foot as most islands are connected by bridges and signs are written in Swedish and English.
[booking_product_helper shortname=”stockholm”]

The official residence of the King of Sweden is one of the largest in Europe. Built on the site of the former Tre Kronor Castle which was destroyed by a fire 1967, the Kungliga Slottet is one of the more prominent landmarks in the Gamla Stan area. Work on the palace began at the beginning of the 18th century but was halted because of the Great Northern War. The palace was eventually completed after 57 years, and the first royal family moved in in 1754, while work was still on. The 608 room palace is the largest royal castle in the world which is still used for its original purpose. Several myths abound about the ghosts of the palace, especially that of the White Lady whose appearance is said to act as a precursor to the death of a member of the royal family. Guided tours of the palace are held twice or thrice a day but it’s a good idea to time your visit with that of the ‘Changing Guard’ which takes place mid-afternoon every day.

Stockholm’s iconic city hall located on Kungsholmen island is the venue of the Nobel Prize banquet and a major tourist attraction. Construction on the building was started in 1911 and took twelve years to complete. Traditional techniques were employed during the construction which used the dark red ‘munktegel’ bricks. The monumental tower located on the southeast corner of the building is topped by a golden spire and three crowns, a national emblem of Sweden. Visitors can avail of some spectacular views of the city from the tower.

The Vasa Museum houses one of Sweden’s most impressive sailing vessels, the massive Vasa warship which sank on its maiden voyage in 1628. Barely minutes after it had set sail the heavy ship tipped and sank with many of the passengers still aboard. The wreckage was painstakingly raised in 1961 and reassembled to its original form. Prior to the opening of the Vasa museum in 1990, the ship was housed in a temporary structure called Wasavarvet. Ever since its opening, the museum claims to be the most visited museum in Scandinavia.

One of the most visited areas in Stockholm is the Gamla Stan. Dating back to the 13th century, the medieval alleyways, cobbled streets, and North German architecture that dominates this area of the city make one feel like a step back in time. Especially popular is the Stortorget, the scenic square which is surrounded by old merchant’s houses. Between the mid 19th century and the mid-twentieth century, many of the historical buildings in the area began to suffer from gross neglect and Gamla Stan soon resembled a slum. However, its past glory was rekindled by the later generation. Many of Stockholm’s iconic buildings like the Royal Palace, the Cathedral and the Riddarholmskyrkan (the royal burial church) are found in Gamla Stan. During winter, one of the most enchanting markets, the Julmarknad (Christmas Market) happens here and draws visitors from all over.

Shutterbugs will be drawn to this stylish museum of contemporary photography in the Sodermalm district. Although not a museum in the true sense, Fotografiska is the venue for several captivating exhibitions throughout the year. The gallery is housed in a former customs house dating from 1906. A cafe bar located on the premises is extremely popular in the summer evenings because of the ambiance which includes DJs, some great cocktails, and outdoor seating.

Located on the island of Djurgarden, Skansen is another popular tourist destination. The first open-air museum and zoo in Sweden were opened in October 1891 by Arture Hazelius, to showcase how people in different parts of Sweden lived. Hazelius traveled extensively around the country and returned with 150 houses which were shipped in pieces to the museum where they were rebuilt. Only three houses that make up the museum are not original. Various trades and areas of the country are showcased in the various buildings that are inhabited by staff in period costume. The Nordic Zoo with its interesting collection of animals is also worth visiting.

The Kunglinga Djurgarden is a centrally located island which is home to many historical monuments, buildings, and a park. The park is extremely popular with locals and visitors. Part of the Royal City National Park, the Djurgarden park is a good place to unwind after taking in the sights of the island. There are plenty of restaurants, cafes, and snack-bars to whet your appetite as well as footpaths and waterfront promenades to stroll along. Visitors can also hire bicycles to explore the forest trails.

The Nordic Museum which is dedicated to the ethnography and cultural history of Sweden was also founded by Artur Hazelius in the late 19th century. Construction on the current building took 19 years to complete and the building was eventually ready in 1907, although it wasn’t to the original plan. If the original plan had come to fruition, the building would have been three times the size that it is today. The museum is a great place to gain insight into how the culture of Sweden has evolved over the years.

One of the finest examples of the 1920s neoclassicist style is the building of the public library designed by Swedish architect Gunnar Asplund. The rotunda with its tall cylinder gives the building a distinct identity. It was the first public library in Sweden to apply the principle of open shelves; a concept that Asplund had picked up when he was studying in the United States. The library with its huge collection of books is a wonderland for bibliophiles.

Another iconic building along the waterfront in the borough of Norrmalm is the Royal Swedish Opera, which is connected to the Royal Palace by the Norrbro bridge. The original opera house referred to as the Gustavian Opera was opened in 1782, thirteen years after construction began. Rather ironically its patron, King Gustave III was shot in the foyer of the opera house during a masquerade. The opera was then shut down for a few months and reopened to be closed down again several times. It was finally demolished in 1892 to make way for the current Opera which was opened in 1899. The majestic neo-classical building with its magnificent gold foyer and grand marble staircase that lead to a three-tiered auditorium hosts many production houses and has been the venue for the performances of many renowned singers.

The oldest church in Gamla Stan is the Storkyrkan (the Great Church) which has its first mention in a written source dating back to 1279. Tradition states that the church was originally built by the founder of the city, Birger Jarl. For four centuries it was the only parish church in the city. Being in close proximity to the former royal castle and the present-day royal palace, the cathedral has been the venue for many important events in Swedish history. Coronations, royal weddings, and royal funerals have all been held here. The most recent royal event held to be held here was the wedding of Crown Princess Victoria to Daniel Wrestling on 19 June 2010. One of the most renowned treasures of the church is the wooden statue of Saint George and the Dragon, created in 1489. Vadersolstavian, a painting dating back to 1632, that adorns the wall is a copy of the oldest known image of Stockholm. The stunning interior of the church is definitely worth exploring.

Sweden’s oldest amusement park is located on the seaward side of Djurgarden island. Since the early 18th century the area was used for similar purposes but in 1883, the park was founded by a German. Most of the buildings around the park are old 19th-century structures which give the park a unique location. Besides having the regular features of an amusement park, Grona Lund is also a notable venue for rock and pop music concerts. One of the most famous performances that it boasts of, is that of Bob Marley in 1980. American rapper, Nas and singer Jason Marz have also performed here.