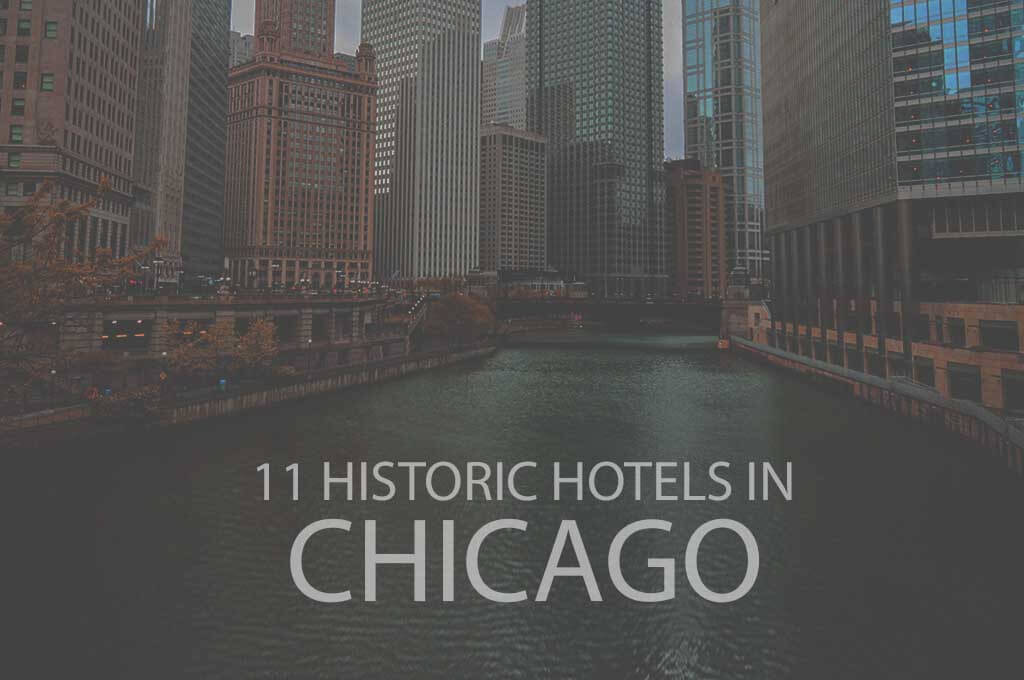 Windy City Chicago is famous for its grand architecture and historic buildings, including amazing historic hotels. In fact, one of the first hotels to open in Chicago dates all the way back to 1831! The best historic hotel in Chicago, Illinois, options, including the oldest hotel, has seen hordes of famous guests pass through its doors. Whether you’re looking for presidential guests, haunted rooms, or movie star residents, Chicago’s historic hotels are as fun as they’re enthralling and culturally relevant. As one of the world’s most architecture-rich cities, Chicago’s historic hotels are now thoughtfully preserved luxury accommodations. So, you’ll see lots of former clubs, factories, banks, and warehouses brought to life through these efforts. So, what are you waiting for? Here are the 11 most historic hotels in Chicago.

Millennium Knickerbocker Chicago – sounds like a delicious Windy City dessert, doesn’t it? It’s actually a historic hotel in Chicago, Illinois – and a rather iconic landmark since its inception in 1927. The hotel was once a prohibition-era speakeasy and a penthouse casino belonging to the infamous Capone family. In fact, you can still see the secret backdoor that gangsters cut into a wall which helped them escape through a back staircase during police raids. The US Armed Forces inhabited the hallways and the Officer’s Club During World War II and the Korean War. In fact, Richard Nixon was nominated Vice President in 1952 at the Republican National Convention at this hotel. If that wasn’t enough, this historic hotel even had a brief stint as Hugh Hefner’s Playboy Towers before transforming into the classy hotel it is today, of course.

Even now, the elegant two-storied lobby pays homage to the gothic hotel’s historical past, complete with wood moldings and marble ornaments. Explore the stunning Georgian-style ballroom and enjoy afternoon tea at the Library Tea Room. However, don’t miss choosing from 50 kinds of martinis at the 1920s-themed Martini Bar, which also hosts live jazz bands.

The Drake, a Hilton Hotel

The 1920s Italian Renaissance-style Drake Hotel lies in the prestigious Gold Coast neighborhood at the beginning of the Magnificent Mile. It’s the epitome of glamor, complete with grand ballrooms and staircases. Ever since it opened on New Year’s Eve 1920, it’s been the place to see and be seen. The Palm Room, formerly the Fountain Court, has been serving tea for nearly 100 years, and the late Princess Diana was a frequent visitor! During the ’40s, the room transformed for summers and winters. During winter, a 2,000-pound fireplace was the centerpiece, while the ceiling opened up and the place brought in a large fountain during summers. It’s no wonder that the Drake was, and is still, one of Chicago’s most expensive hotels.

Besides gold-plated views of Lake Michigan from the north-facing rooms, the Drake is also one of Chicago’s best business hotels. Despite its historic status, modern amenities abound, such as the modern fitness center and even a shopping arcade with big-ticket brands such as Chanel. Interesting side note – President Obama’s secret service detail discovered a warren of hidden passageways beneath this hotel when he stayed here in 2011! Plus, this hotel has been ground zero for filing famous movies, including My Best Friend’s Wedding, Risky Business, and Time and Again.

The 21c Museum Hotel By MGallery is one amazing historic hotel in Chicago, Illinois. It originally opened at the height of the roaring ’20s as the McCormick Hotel. Then, it transformed into the historic Croydon Hotel, a famous hangout for vaudeville actors in the 1930s. Today, this Michigan Avenue hotel is part of the boutique MGallery collection and is full of art and history. If you’re staying here, you get to choose from a host of bright rooms and suites with sky-themed palettes and mod-cons. However, its standout feature is the permanent and revolving art collections and galleries that showcase work from local Chicago artists. In fact, the collection includes specially commissioned and site-specific artwork such as Wallworks by internationally recognized Chicago artists Bob Faust and Nick Cave.

The Blackstone was Chicago’s tallest building when it opened in 1910 and is considered one of the most romantic hotels in Chicago. The French beaux-arts architecture has attracted everyone from presidents to movie stars, who’ve enjoyed spectacular views of Grant Park and Lake Michigan while staying in the lavish rooms and suites. However, it’s most famous for hosting 12 United States presidents and is also where the original “smoke-filled room” originated; a reporter is said to have seen cigar-smoking politicians during the 1920 convention.

Today, this National Register of Historic Places hotel might have been refurbished but still retains period touches. Check out the elegant Crystal Ballroom, where Lucky Luciano’s infamous National Crime Syndicate meeting. In fact, Al Capone frequently came to the former barbershop here. If you’re a fan of the graveyard shift, the hotel’s English Room, with its stained glass windows and paneled Tudor-style wood walls, is allegedly haunted.

Staypineapple Chicago is one gorgeous historic hotel in Chicago Illinois. The 1895-built, 14-storeyed structure was originally the Reliance Building, a former Chicago landmark. The glass-and-steel design was unconventional at that time. But, it set a precedent for the many skyscrapers that make Chicago one of the world’s top cities with the most skyscrapers. Furthermore, it became a National Historic Landmark in 1976 and was restored as the Burnham in 1999 by Kimpton Hotels. Even then, they retained two of the most iconic touches from the original design that is the metal elevators and the mosaic floors.

Today, this is one of Chicago’s top pet-friendly hotels and keeps the spirit of old Chicago alive while also offering modern-day amenities. Besides checking out the Gothic-inspired ornamented exterior, don’t miss dining in style at its iconic restaurant, Atwood, which retains the building’s original grandeur.

The InterContinental Chicago Magnificent Mile is another historic hotel in Chicago. This hotel’s decadent past is evident from the minute you step inside the marble lobby, complete with a sweeping staircase. The 1929-built 41-storeyed hotel was originally built for the exclusive Medinah Athletic Club. It exudes extravagance even today, with original touches such as the crystal chandelier in the ballroom and the cast-bronze friezes still existing. But, that doesn’t mean that it doesn’t have modern touches, such as updates in the rooms and suites. What’s more, it has a host of amenities, such as the indoor pool, which makes this hotel one of Chicago’s best indoor pool hotels. It also has NBA icon Michael Jordan’s Steakhouse, a Starbucks, a wine bar, and an indulgent spa.

The Palmer House is one of the most historic hotels in Chicago, Illinois. This 1871-built hotel, originally built and gifted by businessman Potter Palmer to his bride Bertha, was ravaged by the Great Chicago Fire just 13 days later! It was rebuilt with a 1.7 million USD signature loan, the largest individual loan, and finally opened its doors in 1873.

Today, it’s one of the best boutique hotels in Chicago. The painted ceiling, scintillating chandeliers, and the dramatic lobby evoked the hotel’s grand past when guests like Frank Sinatra and Charles Dickens stayed here. Other famous guests include Mark Twain, Oscar Wilde, and almost every sitting president since Ulysses S. Grant. It has also hosted legendary entertainers; Liberace started his journey in 1947 as the Palmer House pianist! It’s no wonder that the Palmer House is also considered one of Chicago’s best luxury hotels.

The 1870-built Wheeler Mansion is designed in Second Empire style and is Calumet Avenue’s only surviving historic mansion. It originally belonged to Calvin T. Wheeler, a member of the Chicago Board of Trade and a banker. Later on, the house changed hands several times, even having a stint as a Murphy Butter & Egg Company warehouse. It finally transformed into an elegant boutique hotel in 1997, with it becoming a Chicago Landmark the following year. Second Empire style influences can be seen throughout but are especially evident in the tall third-story mansard roof. With just 11 rooms and suites, staying here is an intimate and exclusive experience. Moreover, every room and suite exudes a sumptuous vibe, adding antique walnut armoires from France, reading chairs, Baroque tapestry duvets, and marble-topped antique vanities.

The Hilton Chicago is yet another amazing historic hotel in Chicago, Illinois. It was built in 1927 as the largest hotel in the world, with 3,000 rooms and suites. In fact, the massive structure occupied the length of an entire block. This Beaux-Arts structure is as elegant and opulent on the inside as on the outside, and it still retains its old-world charm – partially, at least. Think blue sky frescoes, gold crown molding, statement staircases, and grand columns.

While the rooms and suites and amenities might be modern, what’s interesting about the hotel is its past. During the Great Depression, it went bankrupt briefly. In the 1940s, it was the base for the army’s barracks. In 1968, its repute descended into infamy when rioters gathered during the Democratic National Convention, and angry policemen tossed them out of the windows. More recently, it became part of television history with ER filming chopper landings on the rooftop deck here. In the 1970s, it underwent one of the most expensive renovations ever, to the tune of 185 million USD, to become the hotel it’s today.

It’s only fitting that a former men’s club is one of Chicago’s most historic hotels. We’re talking about the Chicago Athletic Association, whose origins go back to 1890. This Venetian Gothic property is now a boutique hotel, with a cool rooftop bar and a Shake Shack on the street level – as cool as it gets. There’s even an eight-seat counter, aptly called the Milk Bar, a cafe in the mornings and a speakeasy at night!

This hotel has an intriguing past and was originally an 1893-opened posh men’s private club. The latticed facade, parts of which can be seen even today, was inspired by Venice’s Doges Palace. Much of the original design pieces still exist even after the refurbishment. These include the marble walls and original pool tiles in The Tank, pommel horse-style benches in the rooms, and elevators with old squash court flooring. Did we mention that rooms and suites are stocked with preppy plaid motifs? Vintage, indeed.

We end the list with The Publishing House Bed & Breakfast, the most gorgeous and striking historic hotel in Chicago, Illinois. This isn’t a traditional B&B, but rather the millennial version of a “B&B,” and sits in a century-old historic building with just 11 rooms.

But that’s not all. The owners have a kitchen where they whip up the most delicious breakfasts. They also run the Press Room, a lively wine bar in the basement, and a hobnob with guests in the third-floor living area, which also has a piano.