Top 10 Cities With Most Skyscrapers 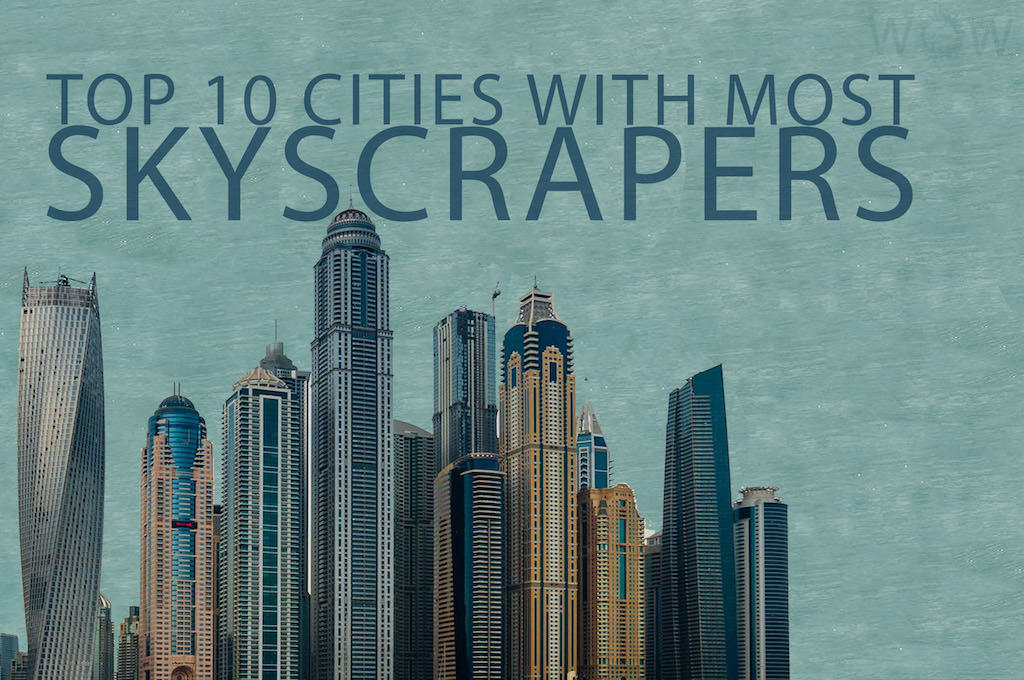 Nearly every major city in the developed world has skyscrapers, which are the most visible signs of a nation’s progress. Thanks to a stronger economy and better understanding about the benefits of tall buildings, many cities around the globe are now looking up, with new towers rising high above their skylines. Some of them are the most awe-inspiring buildings in the world. Join us on a tour of the Top 10 Cities With Most Skyscrapers.

“I don’t think it is how many floors you have. I think it is attitude” architect T. J. Gottesdiener

An island nation on the tip of the Malay Peninsula, Singapore is a great cosmopolitan city blended by Chinese, Indian, Malaysian and European cultures with glitzy high-end shopping malls and colonial buildings. As a cultural melting pot, Singapore offers diverse colorful ethnic quarters; squeezes flavor, color and character into every other street corner. Singapore is rich, safe, clean, vibrant and bustling city full of innovative architecture and exciting shopping opportunities.

Jakarta is the capital city of Indonesia. It is filled with sightseeing and tourist attractions, lots of shopping malls and hidden back streets for nightlife, food and fun.

Guangzhou is a sprawling port city northwest of Hong Kong on the Pearl River. It is the third biggest city in China after Beijing and Shanghai with a population of more than 12 million. It is considered the birthplace of dim sum and has a thriving food scene. Some of the best hotels in Guangzhou nestled in one of these skyscrapers.

Chongqing is a port city set to become the most economically important city in West China and is the biggest inland city of the country with plans for even more massive growth. Nowadays, Chongqing is a modern city, China’s fourth municipality after Beijing, Shanghai, and Tianjin. Chongqing is the most popular place to start a Yangtze cruise, as the Yangtze flows from Chongqing through the Three Gorges, taking in sights like Fengdu Ghost City, White Emperor City and the Lesser Three Gorges.

Tokyo is the capital and largest city in Japan with over 13 million people and it is the center of Japanese culture, finance, and government. Tokyo is a vast city with marvelous mix of modern living and old-fashioned manners, slick high-tech gadgets and cutesy cartoon mascots. It is one of the world’s largest cities, home to cutting-edge electronics shops and towering skyscrapers, ancient art and pretty cherry blossoms.

An estimated 2.7 million residents, 42 km (26 miles) of lakefront, nearly 300 theaters and more than 8000 restaurants are some of the facts that make of Chicago one of the greatest and most beautiful cities in the United States. Chicago has some of the tallest buildings in the US, excellent museums, art galleries, parks, parades all year round, a vibrant night life and a variety of family attractions as well.

There are cities in the world never sleep, Shanghai doesn’t even sit down. This Asian metropolis is a multi-cultural and fascinating place, a mix of modern and traditional Chinese traditions. It is the largest city in China by population and it is one of the most important industrial, technological, commercial and financial center in the country and the entire world. Shanghai lies on China’s east coast roughly equidistant from Beijing and Guangzhou other 2 main cities and international hub of the country. In recent years, a large number of architecturally distinctive and even eccentric buildings have been built here such as the Shanghai Museum, Shanghai Grand Theater in the People’s Square precinct and Shanghai Oriental Art Center. Nevertheless, the city has managed to preserve some traditional style buildings, like the Yuyuan Garden, an elaborate traditional garden in the Jiangnan style. You don’t have to spend much time in Shanghai before you start to love it, its amazing hotels and spas, incredible restaurants, incomparable shows and attractions, and more will captivate you.

Dubai, the world’s fastest growing city and one of the leading cities in the world, is quickly becoming a top glamorous, spectacular and futuristic urban destination for its warm climate, all year-round sunshine, white sand beaches, glitzy hotels, shopping malls and charming heritage attractions. Dubai is one of seven states that comprise the United Arab Emirates (a country formed in 1971 from individual sheikdoms) and it is also its most populous city. It is a cosmopolitan, developed and sophisticated city filled with infinite attractions such as the world’s biggest mall, world’s tallest hotel, world’s second largest man-made marina, the world’s largest aquarium, the biggest indoor snow park in the world and man-made islands.

New York City is the largest and most populated city in the USA and one of the most beautiful, exciting, captivating, and truly amazing cities in the world. Known as “The Big Apple” it is a major world capital and a world leader in finance, arts, culture, architecture, communications and entertainment. It is the center of advertising, fashion, publishing, and radio broadcasting and has so many fabulous attractions that simply cannot be missed.

Hong Kong skyscrapers are an icon of the city. There is nowhere in the world that has more skyscrapers. Hong Kong’s skyline is often considered to be the best in the world, with the surrounding mountains and Victoria Harbour complementing the skyscrapers. More than fragrant, Hong Kong means success, modernity, hard work and excellence. The city developed so quickly that it became the first of the “Four Asian Tigers”. Due to its political and legal independence, Hong Kong is known as the Oriental Pearl with a twist of British influence in the culture. Incredible shopping areas, world class hotels and spas, some of the best restaurants of Asia and more await for you.