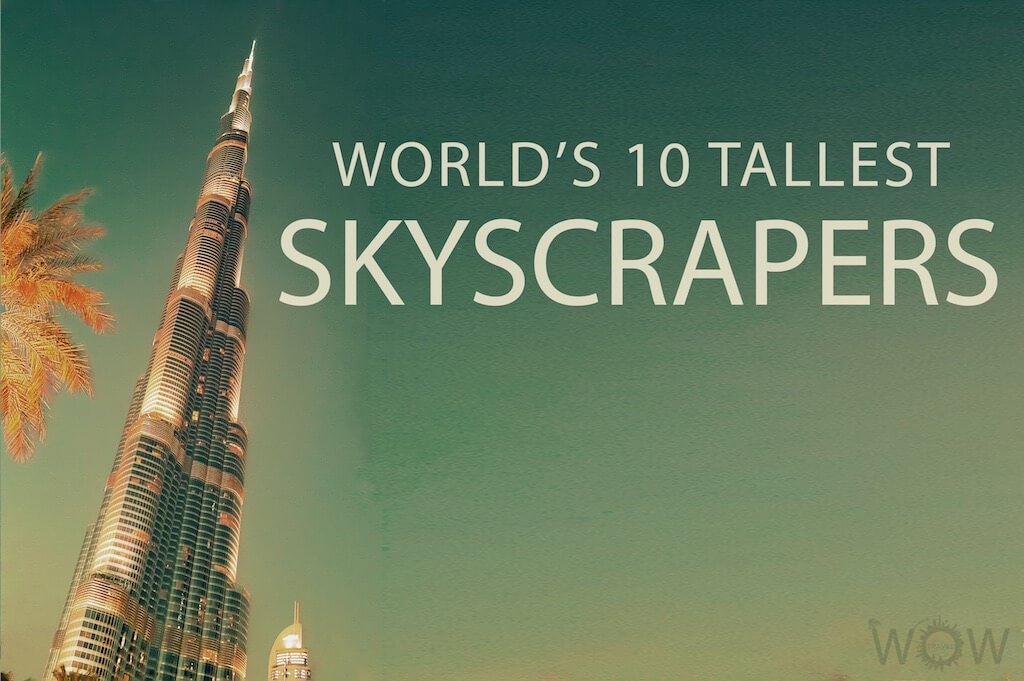 Since the dawn of history, men have tried to reach for the sky, or so we read in the famous myth of the Tower of Babel. Tall buildings have existed for hundreds of years, but during the 20th century, they reached new heights when skyscrapers began to pop up around the world. Men have used billions of dollars and dared the laws of physics and architecture to build monumental and breathtaking structures because the only way to discover the limits of the possible is to go beyond them into the impossible. The followkuing list of the World’s 10 Tallest Skyscrapers is based on data from the Council on Tall Buildings and Urban Habitat, the recognized authority on skyscraper height.

Willis Tower, also known as Sears Tower, was the world’s tallest building until 1996, when it was surpassed by the Petronas Twin Towers. Visitors can step out on a glass box which extends out 1.3 meters (4.3 ft) from the Skydeck.

Located in the city of Nanjing, China, this triangular 89-story building was designed by Adrian Smith + Gordon Gill Architecture, the firm behind the Burj Khalifa. It has retail and office space in the lower section and restaurants, a hotel, and an observatory near the top.

Located in the capital city of Malaysia, Kuala Lumpur, Petronas Towers were the tallest buildings in the world until 2004. They hold the record for the tallest twin buildings in the world. The sky-bridge that connects the two towers is at 41st and 42nd level and it is 58 meters (192ft) long. Can’t get enough of it? Some of the best hotels in Kuala Lumpur offer rooms with an unobstructed view!

The International Commerce Centre’s 118 floors are mostly devoted to office space, but there’s also a Ritz-Carlton hotel as well as restaurants and the sky100 Hong Kong Observation Deck.

The Shanghai World Financial Center is a symbol of commerce and culture that speaks to the city’s emergence as a global capital. To protect the building from fierce winds, it holds two tuned mass dampers below its observation floors to reduce the building’s sway during windstorms and earthquakes.

Taipei 101 stands 101 stories above ground in the heart of  Xinyi District in Taipei, Taiwan. It was the tallest building in the world from 2004 to 2007. The design is based on rich Chinese culture, incorporating Chinese pagoda structure with the shape of Bamboo flowers. With such an amazing view, no wonder some of the best hotels in Taipei offer rooms with Taipei 101 view.

One World Trade Center is the tallest skyscraper in the western hemisphere. It is part of the rebuilding of the office complex destroyed on 11 September 2001. The spire of One WTC attains a height of exactly 1,776 feet—a shout-out to the birth year of the United States. The building’s cooling system runs on reclaimed rain water or that the waste system also helps generate electricity.

Located in Mecca, Saudi Arabia, the holiest city in the muslim world. The Makkah Clock Tower is the tallest concrete building, the tallest hotel and the tallest clock tower in the world. Even the clock itself is the largest in the world, measuring 43 meters (141 ft) in size. The Cost Of The Entire Project Is Believed To Stand At Around A Whopping $15 Billion.

Located in the heart of Shanghai’s Lujiazui Finance and Trade Zone, adjacent the Jin Mao Tower and Shanghai World Financial Center, Shanghai Tower is China’s tallest skyscraper. It has the world’s fastest elevators, which travel at 1,080 meters (3,543 ft) per minute. The building’s 120° twist shape was designed to be strong enough to withstand typhoon-force winds and the exterior lights on the building will be powered by 270 wind-driven generators.