Top 9 Things To Do In Taipei 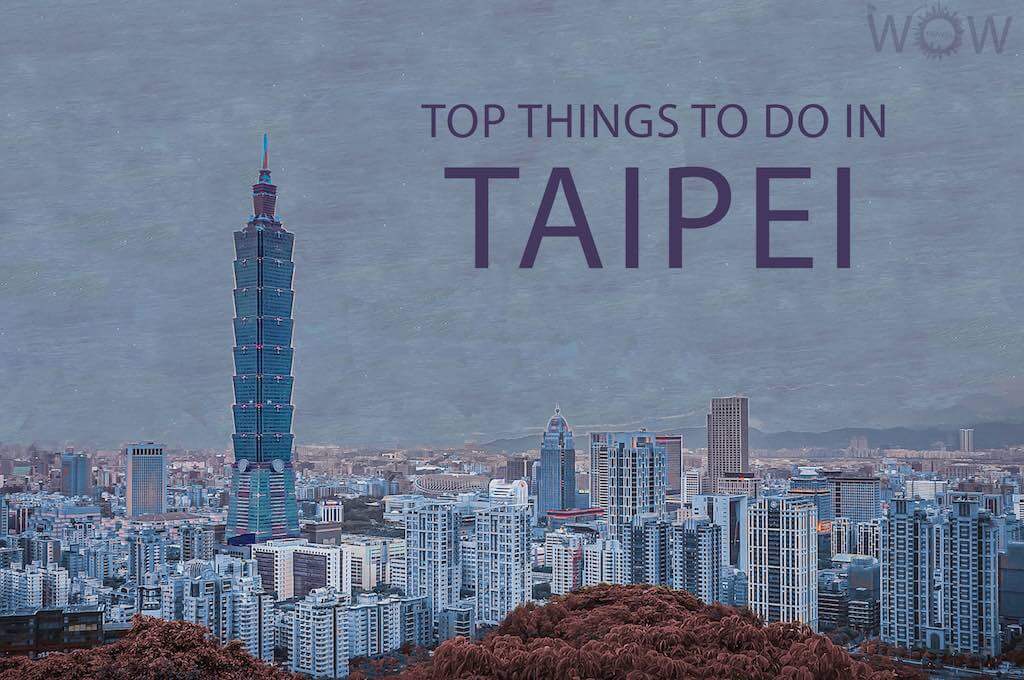 Over the past decades Taipei, the capital city of Taiwan, has gained popularity, recognition along with  status all over the world. This small yet great city is Asia’s 2nd richest city per capita as well as one of the world’s leading electronics manufacturing and information technology center. It is an economically pioneering city, an East Asian transportation hub that offers its visitors everything you can imagine such as great museums, wonderful restaurants, incomparable shopping together Taipei 101, the 3rd tallest building in the world. It is indeed a controversial place in more than one way, the international law questions whether Taiwan exists as a state or a defunct state due to the loss of membership/recognition in the United Nations. However, Taipei is still one of the most visited cities in Asia both by businessmen and tourists alike. Taiwan enjoys a marine tropical climate most of the year so grab your flip flops, your wallet, and come to enjoy it. WOW Travel invites you to check out its Top 9 Things To Do In Taipei.

This beautiful and unique landmark is a national monument dedicated to the memory of Chiang Kai-shek, former President of Taiwan. The Memorial Hall is white with four sides, with a blue and octagonal roof due to the Asian tradition that says that the number eight brings abundance as well as good fortune.

Ximending is one of the most popular tourist spots among both local and international travelers. It has nothing to envy NY’5th Avenue, Ximending has a vast selection of boutiques together with designers stores. This promenade offers a wide list of entertainment spots and activities that bring lots of people of all ages and backgrounds. Ximending attracts an average of over 3 million people per month. It was the first pedestrian zone in Taiwan.

No market compares to this one, especially at night. More than 600 food vendors and small restaurants as well as nonfood stalls. However, this place is more than just food, it also offers its thousands of visitors cinemas, video arcades, and karaoke bars. It is hard to describe, you must experience it.

‎This paradisiac place is known for its natural resources and wonderful scenery. It houses in its premises a great source of sulphur, which is the main component of the Beitou Hot Springs which is visited by millions as a way to heal numerous diseases such as arthritis, muscle soreness, chronic dermatitis. Due to the increase of tourists, this wonderful oasis of peace has become a popular leisure attraction. Nowadays, tourists can find public hot spring pools as well as hot spring resorts.

Up until the construction of  Burj Khalifa in Dubai in 2010, this increidble building was officially classified as the world’s tallest since 2004. It has 101 floors above ground together with 5 floors underground and it is the world’s tallest building with the highest-use green building. As we explained before, the number eight is important in Chinese-speaking cultures, the number eight is associated with abundance, prosperity as well as good fortune so the main tower features a series of eight segments of eight floors each.  Make sure to visit the 91st floor outdoor observatory and experience the ride on one of the two world’s fastest elevators, with the speed of 1010 m/min, equipped with Atmospheric Pressure Control, Active Mass Damper and Aerodynamic Capsule. The view from the observatory is simply breathtaking.  Taipei 101 is also a food experience, not only does it have a food court with 28 fast food style restaurant but it also has 8 gourmet restaurants and 6 gourmet cafes.

“This is one of the oldest temples in Taipei City, it was built in 1738 by the first Chinese settlers, who came from Fujian. The temple is open to Buddhism, Taoism and traditional Taiwanese beliefs. This is also the center of Taipei’s oldest district Wanhua, which is famous for some of the biggest and most traditional markets in the city. The nearby Huaxi Street Night Market is famous for its snake alley, the Guangzhou Street Night Market is the biggest night market, full of traditional “xiao chi” or “little eats”, popular street food enjoyed by all kinds of people. Don’t forget to visit the nearby Xichang Street, famous for herbal shops. One of Taipei’s oldest Streets named Bo Pi Liao is also found in the area. An afternoon of sightseeing and eating must be reserved to explore this part of Taipei. Go to Longshan MRT Station, exit at Exit 1 and turn right to the temple.” Source: Travel.Taipei

This relatively new temple was built in 1967 by Master Hsuan Kung who used vast amounts of his own funds to build it and dedicated it to Guan Yu, the patron god of businessmen. Although it is visited by several tens of thousands of tourists every day, many Taiwanese businessmen also come to pay a visit and thank for their success as well as bonanza. This majestic 7,000 square meter (700 square feet) temple is decorated with sculptures of dragons everywhere.

One of the most beautiful natural reserves in Asia with gorgeous landscapes such as ridges, valleys, lakes, and waterfalls. This famous park is visited by many for its cherry blossoms, hot springs, and hiking trails, including Taiwan’s tallest dormant volcano, The Seven Star Mountain. Its flora and fauna are also a great reason to visit it, there are currently some 1,359 species of plants in the park, growing in water plant and land plant propagation environments. Yangmingshan is also home to a large number of birds of around 123 different species. This is a one day trip for all types of travelers.

Maokong hill, which offers a great view over Taipei City because it is located on the edge of Taipei Basin so the entire city of Taipei can be seen from the mountain. The hill is famous for its many tea houses, in fact it is Taipei’s biggest tea growing area.  If you visit this city you must go and enjoy the unique tea culture, delicious traditional food and charming scenery.