Top 10 Things To Do In Beijing 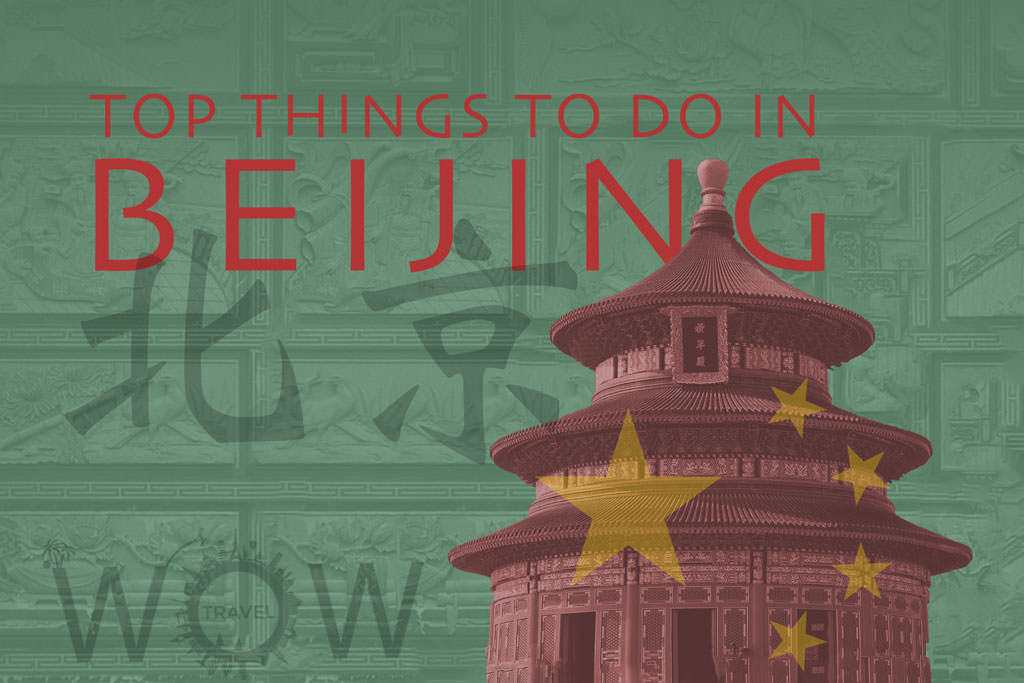 Beijing, the Capital of China and one of the most populous cities in the world, is the center of the nation’s politics, culture and international exchanges and a modern metropolis full of vitality. Discover a metropolis filled with history and ancient sites racing into the future with its modern architecture and advanced technology. Walk along the world’s longest wall and biggest ancient architecture, the Great Wall or go back in time at the world’s largest palace, the Forbidden City. Beijing is significant in a number of ways and attracts visitors from all over the world. Check out WOW Travel’s Top 10 Things To Do In Beijing.

Located in the northeast corner of the city, considered as the largest and best-preserved lamasery in present-day China. Yonghe Temple is used to be the mansion of the third emperor of the Qing Dynasty. It occupies an area of 66,400 square meters (16 acres) and is described as a mini-palace with yellow glazed tiles on the roof and red walls circling the group of buildings. Nowadays it is an active Tibetan Buddhist temple containing a massive statue of Buddha carved from sandalwood.

“798 Arts Zone is also called Dashanzi Art District, which is the site of state-owned factories in the 1950s including Factory 798, originally produced electronics. Attracted by the Bauhaus Style buildings and convenient transportation in this tranquil area, artists began to gather to re-make the factory spaces, gradually developing them into galleries, art centers, artists’ studios, design companies, restaurants, and bars. Nowadays, Beijing 798 Art Zone frequently holds important international art exhibitions and art activities as well as fashion shows. The Beijing 798 Art Festival (from the end of April to the end of May) and the Beijing 798 Creative Art Festival (from the end of September to the end of October) are held every year.” Source: chinatouristmaps

Located in Dongcheng District, Wangfujing is considered as the central heart of Beijing City, and some call it the Fifth Avenue of Beijing. It starts from the East Changan Street and ends at China Art Museum with a length of 1,500 meters (492 ft) and combine tradition, modernity, culture and commerce. The packed stores in the street selling clothes, tea, shoes, souvenirs, books, hats, etc. Visiting one of it’s famous shopping centers is a must: Sun Dong An, the Malls of Oriental Plaza, and Beijing Department Store.

Located about 48 km (30 miles) from downtown Beijing are some of the best-preserved examples of Chinese ancient burial architecture. The Ming tombs are a collection of mausoleums built by the Chinese Ming dynasty emperors. These Tombs are ranked among the finest UNESCO World Heritage sites located in China.

Perhaps the most recognizable symbol of China and its long and vivid history. The Great Wall of China was built over 2,000 years ago, by Qin Shi Huangdi, the first emperor of China. After subjugating and uniting China from seven Warring States, the emperor connected and extended four old fortification walls along the north of China that originated 2,500 years ago. Armies were stationed along the wall as a first line of defense against the invading nomadic Hsiung Nu tribes north of China (the Huns). Signal fires from the Wall provided early warning of an attack. The Great Wall is one of the largest building construction projects ever completed. It stretches across the mountains of northern China, winding north and northwest of Beijing. It is constructed of masonry, rocks, brick, wood and tamped-earth. It was over 5,000 km (3,100 mile) long. Its thickness ranged from about 4.5 to 9 meters (15 to 30 ft) and was up to 7.5 meters (25 ft) tall.

Located on the western edge of Beijing, between the fourth and fifth ring roads, close to the western Fragrant Hills. The Summer Palace (Yiheyuan in Chinese) is the largest and best-preserved imperial garden in China, consisting of a vast ensemble of lakes, gardens and palaces. The garden came into existence early in the 1750s and had once been a summer resort for the emperors.

Located in southeastern Beijing, The Temple of Heaven is the largest complex of magnificent and colorful religious buildings. It was built in 1420 and was the place where emperors of the Ming and Qing dynasties would make offerings to heaven and pray for good harvests. The principle buildings include the Altar of Prayer for Good Harvests, Imperial Vault of Heaven and Circular Mound Altar.

Tiananmen Square is a large city square in the centre of Beijing. It is a tourist site everyone tends to visit on their trip to Beijing. The square can hold over one million people. In 1989, the Chinese People’s Liberation Army (PLA) violently cleared Beijing’s Tiananmen Square of protesters, ending a six-week demonstration that had called for democracy and widespread political reform. This is the place where the famous man (also known as the Tank Man or Unknown Protester) stood in front of a column of tanks on June 5, 1989, the morning after the Chinese military had suppressed the Tiananmen Square protests of 1989 by force. The incident was filmed and seen worldwide.

Beihai Park is the most intact ancient royal garden in China. It was opened to the public in 1925 and in 1961 was one of the first important cultural sites under protection by the State Council. The parkhas beautiful landscape of lakes and hills, meadows and trees. Beihai’s ancient gardens (over 1,000 years old) reflect not only a classic combination of the grandiosity of Chinese northern gardens and the refinement of the southern gardens of China, but also perfectly integrate magnificent imperial palaces with solemn religious construction.

The Forbidden City (also called Zijin Cheng) is a 72-hectare (178 acres) palace complex in Beijing that was used by the emperors of China from A.D. 1420 to 1911. In total, 24 emperors occupied the Forbidden City, so named because it could only be accessed by the emperor, his immediate family, his women and thousands of eunuchs (castrated male servants) and officials. It was renovated constantly throughout its 600-year history. The complex consists of about 980 buildings, mainly in yellow and red colors, surrounded by a wall 10 meters (32 ft) high and a moat 52 meters (171 ft) wide. Source: livescience