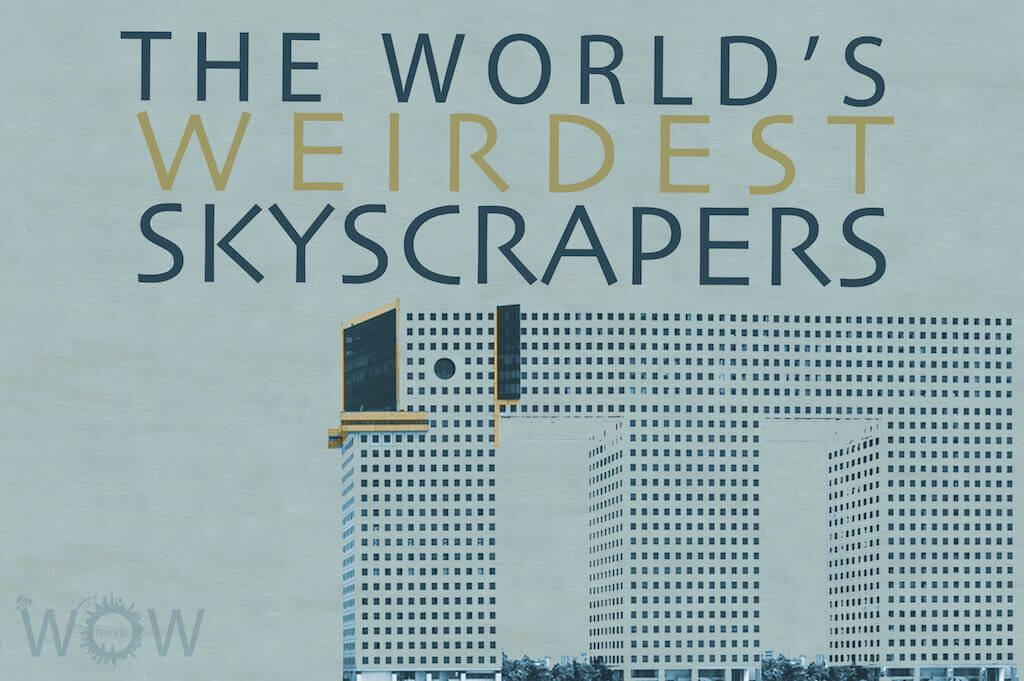 Today, we present to you a collection of buildings that have a quite unusual and bizarre appearance. From the ‘Elephant Building’ to the ‘Cell Phone Building’, this collection of The World’s 20 Weirdest Skyscrapers will certainly open your eyes. They are not only wonders of design but have also become a landmark in their countries.

The Odeillo Solar Furnace is used by the National Scientific Research Center for studying heat transfer fluid systems, energy converters and the behavior of materials at high temperatures. A series of mirrors (not in the photo) reflects the sun light into this massive parabola, which then directs all the light to a single point, where it can reach up to 3,500 degrees centigrade.

Built in Prague between 1985 and 1992, the Žižkov Television Tower is a unique transmitter tower thanks to the unnerving black infants crawling up its 216 meters (708 ft) sides. It was designed by the architect Václav Aulický and the structural engineer Jiří Kozák,

The headquarters of China Central TV in Beijing is 234 meter (767 ft) tall and known commonly as the “boxer shorts” due to its awkward shape.

The Nakagin Capsule Tower is a mixed-use residential and office tower designed by architect Kisho Kurokawa. It is the world’s first capsule architecture built for actual use. The 140 individual capsules were manufactured seperately and designed to be replacable. The Nakagin Capsule is a rare built example of Japanese Metabolism, a movement that became emblematic of Japan’s postwar cultural resurgence. Sadly the building is due for demolition.

Dominating the skyline of Arkhangelsk, a city in Russia’s far north-west, it is believed to be the world’s tallest wooden house, soaring 13 floors to reach 44 meter (144 ft) – about half the size of the tower of Big Ben. The house that Sutyagin built is also crumbling, incomplete and under threat of demolition from city authorities determined to end the former convict’s eccentric 15-year project. Sadly in 2008, the house was condemned as a fire hazard, and ordered to be destroyed. Most of the town is built of wood and the concern was that it would catch on fire, fall over, and then cause the entire town to burn. Source: telegraph

In 1987, North Korea began building a mega, 105-floor pyramid-shaped luxury hotel. The project had 3000 rooms and 5 revolving restaurants on top of it. Now 29 years later, the giant, unfinished shell is a reminder of the country’s unfulfilled tourism dreams.

Genex Tower, also known as Western City Gate, is a 35 story skyscraper in Belgrade, which was designed in 1977 by Mihajlo Mitrović in the brutalist style. The building consists of two functionally different parts (residential tower and business tower), but they are composed as one entity. On the highest level of the business tower, a restaurant was designed.

The Robot Building was designed for the Bank of Asia to reflect the computerization of banking and is one of the last examples of modern architecture in the city.

The Torre Velasca is a skyscraper built in 1950s by the BBPR architectural partnership. The tower is approximately 100 meters (328 ft) tall and has a peculiar and characteristic mushroom-like shape.

Hong Kong’s Lippo Center, also known as the “Koala” building for the bear shapes that hug each tower’s circumference, is one of the city’s most iconic landmarks. The complex was designed by Paul Marvin Rudolph in association with Wong & Ouyang Ltd and was completed in 1988.

The observation platform of this observatory is a bridge connecting the two towers of the Umeda Sky Building, whose roof features a doughnut shape that provides an unobstructed 360-degree view.

Gherkin Tower, officially known as the 30 St Mary Axe, is a 180 meters (590 ft) tall office building in London. The Gherkin was designed by Sir Norman Foster and opened in 2004. It is recognized as one of the more distinctive skyscrapers in the financial district of London and it stands on the former site of the Baltic Exchange building.

The Cayan Tower is a 75 story residential tower with a striking helical shape, turning 90 degrees and spirals in a smooth curve, to give every apartment a stunning view of the sea or marina. Each floor is identical in plan, but is set 1.2 degrees clockwise from the floor below, giving the tower a distinctive form by way of an innovative, efficient, repeatable structure.

Towering an impressive 87 stories, the Aqua design was inspired by the striated limestone outcroppings common in the Great Lakes area. But this sinuous shape is not just a mere formal gesture, but it is also a strategy to extend the views and maximize solar shading.

Completed in 1997, the Elephant Building or Chang Building is a 32 floors high-rise building standing at 102 meters (335 ft) tall, The elephant building consists of 7 parts and it is one of the most famous buildings in Bangkok because it has the characteristics of an elephant.

The Tianzi Hotel (Son of Heaven Hotel) in China features the forms of three Chinese traditional gods, Fu (Happiness), Lu (Fortune) and Shou (Longevity). The traditional god of good taste was apparently unavailable. This 10 story high hotel is apparently holds the Guinness World Record for the “biggest image building”, whatever that means. The peach in Shou’s left hand is actually a suite within the hotel, the two holes in its front being windows. You can identify the windows of the hotel rooms by the symbols in their robes

Beijing-based architect Ma Yansong and his team at MAD Architects sought to design a complex that could address demand for affordable housing and yet be iconic. The firm found a solution in an architectural mash-up of a high-rise and a “groundscraper”: the aptly named Fake Hills places a 194 meter (636 ft) tower alongside a rollercoaster form that undulates along a 805 meters (2641 ft) strip of shore on the South China Sea. Completed in 2015, the 5.3 million-square-foot structure includes a roof platform for public spaces featuring swimming pools, tennis courts, and gardens.

This giant mobile phone-shaped building is located in the city of Kunming in China. The 11-floor building has buttons as windows and a cluster of office windows serving as a giant screen. It is considered by many to be a landmark of Kunming.