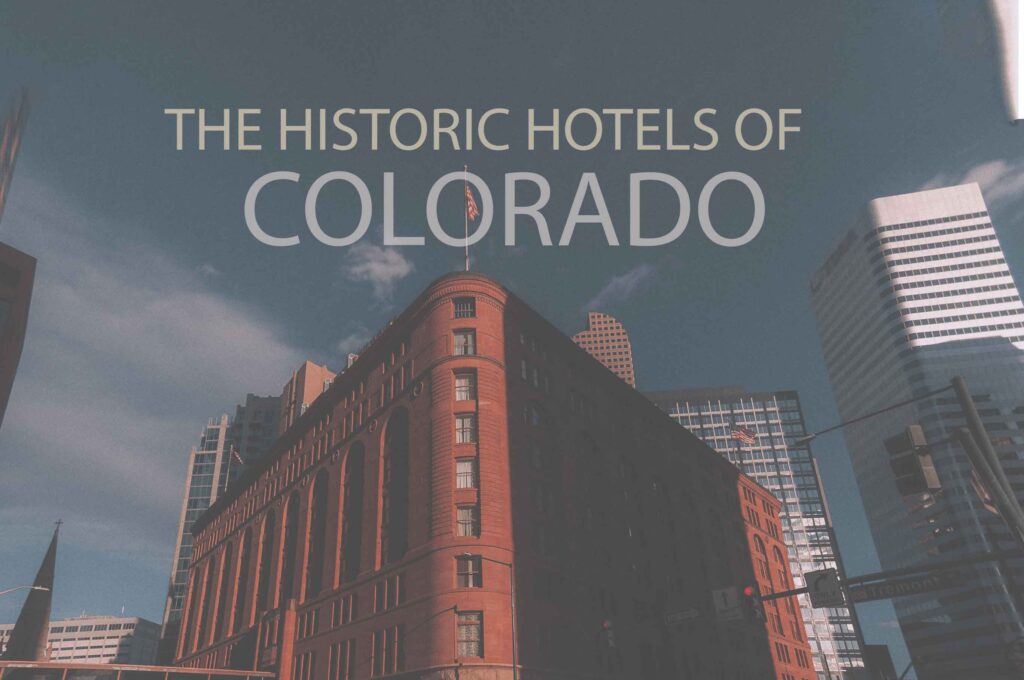 Do you love a little history served alongside your stay in Colorado? If so, then these historic hotels of Colorado will excite you! By spending your nights at one of them, you’ll be able to travel back in time and learn more about Colorado’s rich history. Many of the hotels on this list have even been operating as far back as the late nineteenth century! Don’t worry, though! Despite still having their turn-of-the-century charm, they don’t forget to offer travelers like you all the modern amenities you need. For a good night’s sleep with a side of history, you’ll want to stay at one of the hotels listed below! Keep reading and learn more about them!

Kicking off this list of the historic hotels of Colorado is The Oxford Hotel, one of the first hotels in Denver’s oldest and most populated district, Lower Downtown. Opened in 1891, it was and still is the only wood-burning fireplace in downtown Denver. The idea to establish a lavish hotel close to Union Station was the brainchild of three local building and brewing tycoons. During World War II, this hotel hosted servicemen and, throughout the years, has undergone several modifications.

Despite their rich history, this hotel’s spacious and comfy rooms still offer contemporary comforts and amenities! And unlike other smaller Colorado Springs historic hotels, this property has 80 opulent rooms and suites in total. We think everyone will enjoy staying at this hotel. Whether you’re a casual traveler or a businessman, this historic hotel won’t let you down.

The imposing Grand Hotel was built in a remarkable 10 months after being commissioned by perfume importer and mill owner W.S. Thomson back in 1882. Living up to its name, this hotel was so grand that for more than two decades, it served as the administrative center for the town of Silverton and San Juan County, in addition to housing travelers. That’s not all! Named one of the best historic hotels of Colorado, it was also home to the local post office, bank, general store, doctor’s office, and Silverton Standard Newspaper.

This hotel, which changed ownership in 1951 and adopted the name Grand Imperial Hotel, remained open throughout the silver crash, the Great Depression, and both World War I and II. Then, in 2015, the Durango & Silverton Narrow Gauge Railroad’s owners, the Harper family, bought the hotel and started a major restoration process. Now, it’s a much-loved hotel that features top-notch facilities like a restaurant, bar, shared lounge, and ski-to-door access in Silverton.

The Cliff House at Pikes Peak, which is older than the state of Colorado itself, has hosted notable dignitaries and withstood the test of time. Despite being in operation for almost 150 years, this hotel still exudes its charm from the bygone era. Don’t worry, as it also has all the necessary conveniences and services! This AAA Four Diamond hotel boasts 54 exquisite guestrooms and opulent suites, and each of them is decorated in the style of the late 1800s. Apart from that, you’ll also have a choice of three excellent restaurants!

This hotel was constructed in 1873 at the base of Pikes Peak, and it’s also the state’s second oldest hotel. Like other Colorado Springs historic hotels, it has attracted the wealthy and the famous. They include iconic figures like Theodore Roosevelt, Charles Dickens JR, and Clark Gable. After that, in 1999, the hotel underwent an extensive remodel.

The Windsor Hotel, which is in the center of the San Luis Valley, is a lovely place to spend the night and get some food. Also named among the historic hotels of Colorado, it occupies almost one-half of a city block in the middle of Del Norte. Soon after the town was founded in 1871, this hotel started to be built. The town thrived until the early 1970s, when it started losing residents, and the Windsor Hotel soon followed.

This hotel became seriously out of condition and, at one point, was almost destroyed. Thankfully, it was stabilized and restored after a local donor intervened in 1993. Like many other Colorado Springs historic hotels, it now features dining rooms, a parlor, and a living history interpretive area. The hotel also now has more than 20 newly restored and exquisitely decorated guestrooms.

The Brown Palace Hotel and Spa

The Brown Palace Hotel and Spa is set in downtown Denver, Colorado. It’s the second-longest continuously operating hotel in Denver and unquestionably one of the best historic hotels of Colorado. Built in 1892 out of sandstone and red granite, this hotel was one of the first atrium-style hotels ever built. Also, it was named after its original owner, Henry C. Brown.

Since it first opened in 1892, this spa hotel in Colorado, a part of Marriott’s Autograph Collection, has enjoyed providing exceptional service. One of the highlights of this hotel is its grand atrium lobby, which today has 241 rooms despite having 400 originally. Best of all, almost all of the US presidents, since Teddy Roosevelt first visited in 1905, have stayed at this hotel! Oh, the Beatles have also stayed here!

Up next is the New Sheridan Hotel, a three-story wood-frame hotel that was initially constructed in 1891 to serve the growing number of prospectors who flocked to Telluride in the hopes of striking it rich. Sadly, the hotel was burnt down three years after it was built. Then, in 1895, this hotel was reconstructed (hence, the name). This time, it was built with brick to lessen the chances of it burning down again. Thankfully, to this day, it remains the oldest and most historic hotel in Telluride.

After that, this hotel had a huge makeover in 2008 that preserved and highlighted the heritage of the building by incorporating Victorian-style furnishings, features, fabrics, papers, and moldings into the 26 guestrooms and public areas. In addition to that, this hotel is also home to Telluride’s oldest bar, the Historic New Sheridan Bar. It features a gorgeous mahogany bar and room partitions with beveled and lead glass panels.

Of course, we can’t talk about the historic hotels of Colorado without mentioning Beaumont Hotel and Spa. This hotel, which is a part of the National Register of Historic Places in the US, was opened in 1887. With its opulent dining room and elaborate furnishings, it was once widely regarded as Western Colorado’s best hotel. Apart from that, it has also housed many notable guests like President Theodore Roosevelt, President Herbert Hoover, King Leopold of Belgium, Chopeta, the widow of the Ute Chief Ouray, and French actress Sarah Bernhardt, among others.

In addition to that, this hotel was built with the mission of luring rich mining investors to the city. How, exactly? With its beautiful interiors, of course! It boasted gold-painted balconies, cathedral glass skylights, and a sweeping oak staircase, which you can still witness today. Compared to other Colorado Springs historic hotels, this one only has 12 rooms and suites in total. Don’t worry, though, as each of them has its own personality and is spacious!

As the first five-star hotel in Boulder, Hotel Boulderado is also called one of the best historic hotels of Colorado. You’ll be transported back in time by staying at this red-brick property! If you’re wondering, the name of this hotel is a mix of Boulder and Colorado. The hotel was purposely named that so that guests would always remember where they had stayed. Pretty clever, right? The hotel celebrated its formal inauguration with a gala event on New Year’s Eve in 1908. The first guests were able to spend their night at this hotel on New Year’s Day in 1909.

Over the years, notable visitors have been spoilt by this hotel. They include trumpeter Louis Armstrong, jazz clarinetist Benny Goodman, and poet Robert Frost. On top of that, the original Otis elevator is still working today, transporting guests to their rooms and back in time. What’s more, the third floor of this hotel offers free self-guided historical excursions. Plus, the rooms combine modern and Victorian-style decor.

The four-story Victor Hotel was constructed by the Woods brothers in 1900 as the reincarnation of the one that had burned down. The 20-room hotel, listed on the National Register of Historic Places, was expanded so that the First National Bank and Woods Brothers Investment Company, along with the storefronts on the first floor, could be added.

Also, did you know that this hotel, like many other historic hotels of Colorado, is rumored to be haunted? That’s because after being renovated, it also had an elevator which was used to transport the deceased up to the fourth floor when the ground was frozen. They were stored there until the ground was thawed, and they could be buried. Plus, a ghost of a man named Eddie, who allegedly fell down the elevator shaft, is rumored to be haunting the people staying in room 301!

The Strater Hotel is another historic hotel in the city that’s loved by many. Henry Strater, a pharmacist from Cleveland, came up with the idea for the Strater to bring Durango’s past to life. Even though Durango wasn’t yet a metropolis of any type, Strater realized it would require a luxurious hotel if it wanted to become one. Additionally, this hotel is set in downtown Durango, allowing guests to be just two blocks away from the Durango and Silverton Narrow Gauge Railroad.

Believe it or not, this hotel is similar to a living museum. It has a substantial collection of American Victorian walnut antiques. They’re spread across the hotel, in both the guestrooms and common areas. Aside from that, the hotel is also furnished with lovely woodwork and vintage wallpaper. Named one of Colorado’s most popular historic hotels, this hotel is super welcoming. Even if you’re not staying at the hotel, you’re allowed to stroll around the lobby!

Hotel Colorado, one of the top historic hotels of Colorado, is nested in the Rocky Mountains. Opened in 1893, this astonishing hotel was the idea of Walter Devereux. He thought Defiance (now known as Glenwood Springs) needed a touch of European elegance and flamboyance. For more than a hundred years, countless legends and iconic names have walked the halls of this hotel. Its airy guestrooms and suites are all individually themed with Victorian elements. Some of the suites are even named after the hotel’s famous visitors, including Molly Brown and President Teddy Roosevelt.

Guests may savor the Old West’s rich history at this hotel while enjoying the contemporary comforts and luxuries. Apart from that, it also provides access to some of the top ski resorts in Colorado and the country, among a wide range of other outdoor activities. Whether you’re traveling in the winter or summer, this hotel offers plenty of chances for both rest and adventure. Another fun fact: in 1977, this hotel was listed in the National Register of Historic Places in honor of its colorful past and architectural importance.

Recommended Things To Do in Colorado