Top 10 Things to Do in Atlanta 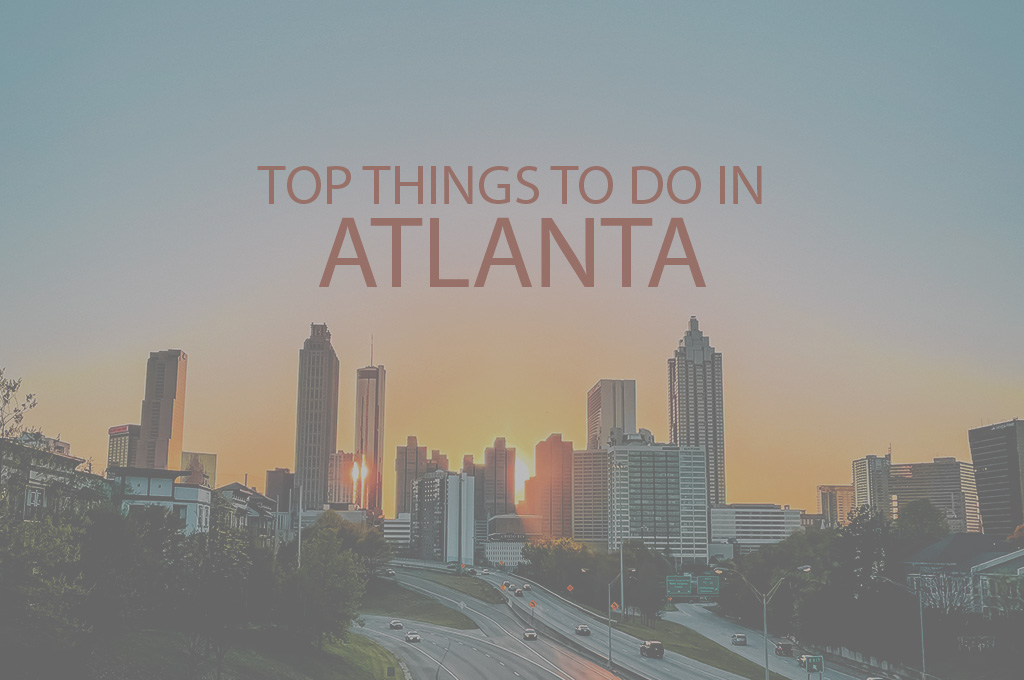 Are you looking for a big-city getaway with a dash of Southern charm? Then, you need to look no further than Atlanta, Georgia. The ‘City in a Forest,’ which is also monikered ‘Hotlanta’ because of its humid climate, is well-known for its futuristic influence and rich history. Not only is it the birthplace of the Civil Rights great Martin Luther King, but it’s also a city of transformation and is the designated “Hollywood of the South.” So, it’s no surprise that there are tons of amazing and fun things to do in Atlanta, Georgia, no matter the week of the year. There’s also the lush outdoors, which is why it has the ‘forest’ in one of its monikers.

Furthermore, it also boasts a stellar dining scene, exquisite retail options, and amazing art museums. So, before you get lost in everything that the “Big Peach” has to offer, here is our list of the 10 best and most fun things to do this week in Atlanta, Georgia.

Exploring the historic Martin Luther King Historical Park is one of the most fun things to do in Atlanta, Georgia, this week. The protected site, which takes up two blocks on Auburn Avenue, includes not just Dr. King’s 1895-built birthplace but also the Ebenezer Baptist Church, where both he and his father were ministers. Between his birthplace and the church is Fire Station No. 6, which played an important role in the neighborhood’s life. What’s more, it’s also where volunteers tell stories of the time when Dr. King grew up here. Moreover, the park also houses the Martin Luther King Jr. Center for Nonviolent Social Change. However, the park’s centerpiece is the Freedom Hall Complex, wherein lie Dr. King and his wife’s graves.

MLK Jr.’s life is best discovered with this Martin Luther King Historic District Walking Tour, which allows a maximum of just 14 guests. As you move through the places where Dr. King inspired minds, hearts, and socio-political change, it’s no wonder that the tour makes for an intimate and infinitely moving experience.

The 30-acre-huge Atlanta Botanical Garden sits right next to the verdant Piedmont Park and is a lush and serene oasis in the heart of the city. It nearly doubled its size in 2010 when it opened the 600-feet-long Canopy Walk, suspended in the trees. You can walk through the edible garden of native plants and visit the steamy orchid house. Do make time for an upscale meal at Longleaf, one of the world’s few restaurants, to sit in a botanical garden! Besides being so beautiful, the Atlanta Botanical Garden also leads numerous conservation efforts, including a program to save rare frogs, the Conservation Greenhouse for endangered plants, and the Orchid Conservation Institute.

The botanical gardens and other lush areas of the city are best explored on this three-hour Atlanta – A City in a Forest Private Nature Tour. It begins with the world’s largest public park, Piedmont Park, before moving on to the Central and Grant Parks and finally ending with a trip to the Atlanta Botanical Gardens.

The High Museum of Art is not just one of the most fun things to do in Atlanta, Georgia, this week, but it’s also one of the Southeast’s biggest and best museums. Even the exterior is a striking standout, with a steel, glass, and white concrete behemoth structure. Besides a permanent collection of more than 17,000 works, the art museum campus also has photographs, classic American and European works, and decorative arts. Don’t miss seeing the newest collection, the Doris and Shouky Shaheen Collection. It includes works by legendary artists such as Henri Matisse, Amedeo Modigliani, and Claude Monet. Do you have time to explore only one art gallery or museum in Atlanta? This one’s a heavy-hitter, so surely check it out.

The Ponce City Market clocks in a footprint of a whopping 2.1 million sq. feet and is the largest brick structure in Southeast US. The massive 1926-erected structure, a formerly Sears and Roebuck building, is now home to gyms, local boutiques, big retailers, and more than 20 varied food stalls and award-winning restaurants. It’s no wonder that it’s considered one of Atlanta’s most exciting mixed-use development. Ponce City Market is where you have a good time, such as hanging out at the rooftop bar, playing Trivia Night, checking out the farmer’s market, or catching a show at the RoleCall Theater.

In fact, the market management even hosts fun events such as wine tastings, candle-making and art workshops, cooking classes, and more. One of the major stops and sights on this 5 Hour City Tour by Air-Conditioned Bus of Atlanta is the market, so go enjoy!

The 48-acre public park of Historic Oakland Cemetery is one of the most quietly fun things to do in Atlanta, Georgia, this week. This 1850-established final resting place of more than 70,000 souls is one of Atlanta’s oldest public parks. Over the years, it’s grown in size and now includes miles of walking trails spread among the mausoleums, decorative sculptures, and headstones. Some of the most well-known people laid to rest here are Maynard Jackson, Atlanta’s first African-American Mayor, golfer Bobby Jones, and author Margaret Mitchell of “Gone With the Wind” fame. In fact, even her house is another Atlanta landmark.

The beautifully maintained statues and stones and the green spaces make the Oakland Cemetery one of the city’s most popular picnic spots too. The Civil War to Civil Rights Private Tour of Atlanta stops at this cemetery, the final resting place of thousands of Civil War soldiers.

Did you know that Coca-Cola was invented in ‘Hotlanta’? Yes! It was the brainchild of a morphine-addicted pharmacist who invented an addictive and toxin-free painkiller in order to kick the habit. This gleaming museum is a tribute to the beloved fizzy drink and is one of Georgia’s largest tourist attractions. It not only chronicles the history of the drink and the soda industry, but it’s also home to the brand’s global corporate headquarters. Check out the DIY beverage fountains dispensing flavors, 4D theater displays, the pop-culture museum, and the replica soda fountains. Are you feeling thirsty? Choose from more than 100 beverages, including all the classics and the limited editions Coke released over the years.

With this World of Coca-Cola Skip-the-line Ticket, you could zip into the museum. Head to the cola-making stations to make your drinks. Or, you could take factory tours and see the bottling process for coca-cola. Finally, there’s a taste-testing site, a “vault” dedicated to the secret recipe, and a pop culture gallery.

The 1889-founded Atlanta Zoo is one of the most fun things to do in Atlanta, Georgia, this week. Not only is it one of Atlanta’s oldest cultural destinations, but it’s also one of the continuously operated great zoos in the U.S. The 40-acre-huge park is home to more than 1,000 animal residents spread across more than 200 species. Moreover, there are also unique habitats and typical zoo inhabitants such as flamingos, tortoises, alpacas, bears, giraffes, lions, and elephants. However, the zoo is most famous for being one of only three zoos in the United States to house giant pandas. Plus, it also has one of the largest populations of great apes in the whole of North America.

The zoo divides most animals by geographic region. For instance, the “African Savanna” has naked mole rats, rhinos, and elephants. Meanwhile, the “Asian Forest” has Komodo dragons, tanukis, and pandas. Additionally, the rainforest has lemurs and gorillas. Finally, there’s even an aviary with twittering, vibrant birds. This Atlanta Zoo Atlanta General Admission Ticket will let you in, and you can explore the zoo at your own pace.

The Georgia Aquarium is not just the largest aquarium in the country, but it’s the third-largest aquarium in the entire world. It also happens to be the largest indoor aquarium in the Western hemisphere and doubles as a teaching hospital, with more than 100,000 water-loving residents. What’s more, it boasts many saltwater and freshwater habitats to keep visitors happy for hours. The big stars include penguins, dolphins, Beluga whales, and massive whale sharks. The Atlanta: Downtown, Midtown, or Eastside Segway Tour takes you on a fun Segway ride around Atlanta’s best sights, including the aquarium.

A unique option that the Georgia Aquarium offers is the opportunity to snorkel or dive in the tank with the sharks; all you need is a SCUBA diving certification. Do you not want to get wet? The aquarium even has an acrylic tunnel where you can indulge in a spectacular underwater experience and view marine life on all sides.

The flavors of Atlanta are incomparable, whether it’s the slow-smoked BBQ, the flavored ice pops, or the fried chicken. We could go on, but the point is that a food tour is one of the most fun things to do in Atlanta, Georgia, this week. And no matter how long you’re here, you cannot leave without stuffing your face with Southern fare. This 3.5-hour long Food Tour of Inman Park and the Atlanta Beltline aims to do just that – and then some. Dig into delicious Southern Food in all its wondrous forms, modern and traditional, at six award-winning local restaurants.

This small group tour includes small plates, alcoholic drinks, and a hearty lunch. There’s even a local tour guide who’ll tell you about Atlanta’s history, culinary and otherwise. Finally, the tour even takes you to the Eastside Trail’s iconic murals and the Victorian Houses in Atlanta’s first suburb, Inman Park.

You cannot leave Atlanta without seeing the 1929-built Fox Theater, which is nothing less than an elaborate movie palace. The theater sits in a turn-of-the-century movie palace that’s now home to comedy headliners, top-billed bands, and Broadway tour stops. In fact, it’s “the” place in the city to catch everything from the Broadway shows to the summer movie series. What’s more, the Egyptian-style venue even features the world’s largest working Moller theater organ, the “Mighty Mo,” which was built in 1929.

Culture vultures will also love the lavish, oriental-style architecture of this movie palace, which draws from both Egyptian and Islamic cultures. So, it’s filled with ablaq stone patterns, gold leaves, archways, towers, and domes. Moreover, it has an Arabian courtyard with a twinkling artificial night sky. Have you ever seen that in a movie theater? We think not! The Private City Highlights Tour of Atlanta includes a stop at the Fox Theater so that you can check out other sights of the city along with the theater.

Get Some Culture in Atlanta

Grab A Bite in Atlanta