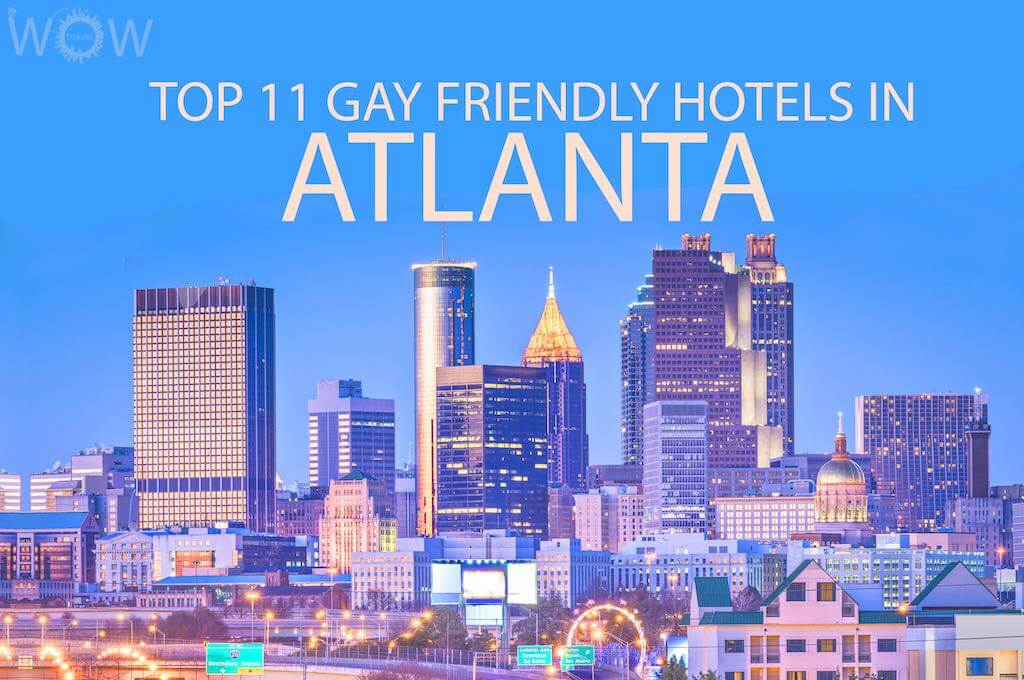 Often referred to as the ‘Gay Capital of the South,’ Atlanta city has a warm welcoming vibe. Given its rather conservative past, it is rather surprising that the city has one of the highest LGBT populations in the United States, coming in a close third behind Seattle. Although many people still hold onto their prejudices, the city is by and large quite accepting of the community. As such, you’ll find plenty of gay friendly accommodations but no exclusively gay hotels in Atlanta.

The Midtown area is where you’ll find Atlanta’s vibrant gay scene but this is not the only gayborhood in the city. Smaller areas such as East Atlanta, Little Five Points neighborhood and Cheshire Bridge road area also attract a huge LGBT crowd. Midtown has plenty of gay friendly hotels to choose from, ranging from upscale to more affordable options.

Atlanta is not your conventional gay holiday destination but it has plenty to offer by way of attractions that you can explore on a guided city tour. The city and its surroundings are steeped in history so there’s a lot to discover. If you’re a history buff looking for something a little off the track you may want to experience the civil war and battlegrounds of Atlanta on a guided tour.

One of the newest hotels in Atlanta, Midtown, the AC Hotel by Marriott is located right in the ‘heart of the arts.’ The location puts you within easy walking distance of many of the city’s attractions as well as the vibrant gay nightlife. It’s no wonder then that the hotel is gradually climbing to the top of the list of favored gay hotels in Atlanta.

Minimalist modern guest rooms come equipped with super-fast Wifi and other amenities. A simple color palette lends a soothing touch to rooms which are clean and comfortable. An outdoor pool, onsite fitness center, great restaurant, and a laid back rooftop bar are other facilities that you can look forward to at this chic Marriott property.

Within walking distance of several cultural attractions such as the High Museum of Art and the Woodruff Arts Center, you’ll find the Artmore Hotel. The hotel’s location in the heart of Midtown puts you in close proximity to much of the gay nightlife, making this one of the more popular affordable gay hotels in Atlanta.

The hotel fuses its original 1920s Spanish architecture with more modern decor. It has a lovely garden courtyard with wicker chairs and a stone fountain and tastefully decorated rooms. Rooms showcasing bright decors in shades of red, white and cream have adequate modern conveniences. The hotel does not have an onsite pool or restaurant but the reasonable rates are a big draw.

For someone looking for a no-frills affordable gay hotel in Atlanta, the Cheshire Motor Inn is a good choice. Located between Buckhead and Midtown, the inn provides easy access to most of the bars and clubs. Its just two blocks to BJ Roosters, Heretic and Club Eros. Given its proximity to the gay nightlife and its cruising reputation, the inn is quite popular with men looking to have a good time.

The inn has a very similar vibe to Beck’s Motor Lodge in San Francisco. You get what you pay for here so don’t expect any great luxuries. What you can look forward to here are spacious rooms with king-sized beds and a few amenities. Apart from its convenient location, another great thing about the inn is that it has free onsite parking.

Set in an art-filled 19th-century building, this six-room bed and breakfast is a great option for those who prefer a more homely setting. Stonehurst Place ranks very high with gay travelers for its ambiance and hospitality and is definitely one of the more popular gay accommodations of its kind in Atlanta. However, this upscale property is not any run of the mill guesthouse, but one with class and warmth.

Built in 1886, the house remained with the same family for a century until the current owners bought it. Historic architectural details such as the brick fireplace and built-in bookshelves add a special touch to the eco-friendly house. Tastefully done up bedrooms feature four-poster canopy beds and tiled fireplaces. All rooms come with modern conveniences and some bathrooms have spa tubs. Quite naturally, the place is not big on facilities but there are plenty of open spaces for guests to relax. The breakfast served here is especially delicious.

The Ellis Hotel is a little removed from the gay action of Midtown but its location in the historic heart of downtown Atlanta makes it a popular choice. For those wanting to explore the attractions of the city other than the vibrant nightlife, this is a good affordable choice.

Ellis Hotel is a landmark hotel listed on the National Register of Historic Places. It opened in 1913 as the Winecoff Hotel but a tragic fire, rated as the deadliest hotel fire in US history, forced its closure. Today the hotel is a comfortable modern hotel that retains many of the original architectural details of the facade.

Attractive contemporary guest rooms are decorated in light earth tones with blue accents and equipped with modern conveniences for a comfortable stay. Most ensuite bathrooms feature a shower/tub combo and complimentary toiletries. The 15th floor of the hotel, ‘Fresh Air Floor,’ is designated for guests with allergies. Other amenities at the hotel include a restaurant that focuses on fresh farm to table ingredients, wine tastings every evening, and a 24-hour fitness center.

If you’re looking for something really top end and luxurious it couldn’t get better than the Four Seasons. Possibly one of the finest gay hotels in Atlanta, this Midtown hotel is in a class of its own. Although the hotel does have a children’s program, the ambiance is better suited to business travelers and couples.

Soaring ceilings and a grand marble staircase greet guests entering the three-tiered lobby. The rest of the hotel is more toned down than the opulent lobby but no less sophisticated, with a stylish mix of leather and crushed velvet. Predictably, guest rooms are sophisticated with big windows and equipped with upscale amenities.

A standout feature of the hotel is its lengthy indoor saltwater pool. It features a small whirlpool and has a few loungers and couches, making it one of the best hotel pools in Atlanta. Guests can also indulge in a number of treatments at the spa or take a turn at the spacious gym. Besides all this, the Four Seasons also has a lively bar and a good restaurant.

Renowned for hosting the premiere gala for ‘Gone WIth the Wind’ in 1939, The Georgian Terrace still exudes style and class. Its Midtown location within easy reach of many attractions and nightlife makes it a popular choice of gay hotels in Atlanta. The ‘Grand Dame of Atlanta,’ boasts of having hosted the likes of Walt Disney, Elvis Presley, and F. Scott Fitzgerald.

Guests can choose from a variety of rooms that range from the ‘bare-bones’ standard to larger apartment-style suites complete with full kitchens. The hotel is also popular with locals for its dining options. It has three distinctive restaurants, to choose from. Its main Livingston restaurant, the casual Bayou Cafe and small plate Edgar’s Proof & Provision. Although the rooftop pool is neither sleek nor top-notch, it offers panoramic views of the city and a pleasant swim.

Across the street from the Fox Theater in Midtown, you’ll find Hotel Indigo, another hotel that ranks high on the list of gay hotels in Atlanta. Bars and restaurants along Peachtree Street are within a 10-minute walking distance from the hotel. It’s also less than a five-minute walk to the North Avenue MARTA station that provides easy access to downtown.

Situated in a historic 12-story brick high rise that dates back to 1923, the hotel underwent extensive renovations to transform it into its present avatar. The hotel has a modern, theatrical vibe largely due to its proximity to Fox Theater. Contemporary homey rooms feature wood floors and stylish furnishings that are accentuated by a themed mural behind the bed. Although the rooms are modestly sized, the ensuite bathrooms are quite tiny. Amenities geared towards guests’ comfort include a lobby bar and restaurant, a small 24-hour gym and three meeting/event rooms.

Loews Atlanta has a prime location along Peachtree Street, close to the top attractions of the city. Its location bang in the middle of the central Midtown neighborhood, the hotspot of gay action, pushes it to the top of the best gay hotels in Atlanta. Piedmont Park, Margaret Mitchell House and the High Museum of Art are some of the attractions that are in close proximity to the hotel.

An open-plan lobby with double height columns, a glassy new exterior, and an interesting front desk give the hotel a contemporary feel. Tastefully furnished modern rooms with ensuite bathrooms and floor to ceiling windows are bright and comfortable. Other amenities that guests can look forward to are a spacious spa on the seventh floor (making it one of the 11 Best Spa Hotels in Atlanta), a gym, complimentary chauffeur service (within a limited radius), and a restaurant.

One of Atlanta’s newest boutique hotels is the Moxy Midtown. Given the growing popularity of the Moxy brand, there’s no doubt that this property too will soon be one of the most popular gay hotels in Atlanta. Similar to its properties in Berlin, Chicago, and Frankfurt this hotel also has a funky vibe aimed at the hip millennial generation.

Moxy hotels are designed to be different and this one doesn’t disappoint with its fun decor and friendly vibe. The bar is the check-in desk where guests are greeted with a complimentary cocktail and their room key. Urban chic bedrooms have a well-appointed functional space and comfortable beds. Glass enclosed showers feature complimentary Muk bath amenities. Besides the comfortable rooms, the Moxy also has a poolside rooftop bar and other unique social spaces.

The W group has three properties in Atlanta so gay travelers who love the brand are quite spoilt for choice. Midtown is where most of the gay action is so its only fitting that the W has a property here. However, W Midtown has a more toned-down design than the other properties in the city so it may be a tad disappointing for those used to the W’s opulence. That’s not to say that it has cut corners on luxuries.

One of the largest W Hotels in North America, the hotel has a cool, sophisticated vibe without going over the top. The guest rooms are large and decorated with the signature W palette. They feature floor to ceiling windows that allow ample natural light into the rooms and are equipped with modern conveniences. Guests can also relax at the stylish Whiskey Park bar or enjoy a dip in the hotel’s pool.

Get Some Culture in Atlanta: