Top 10 Things To Do In Malta 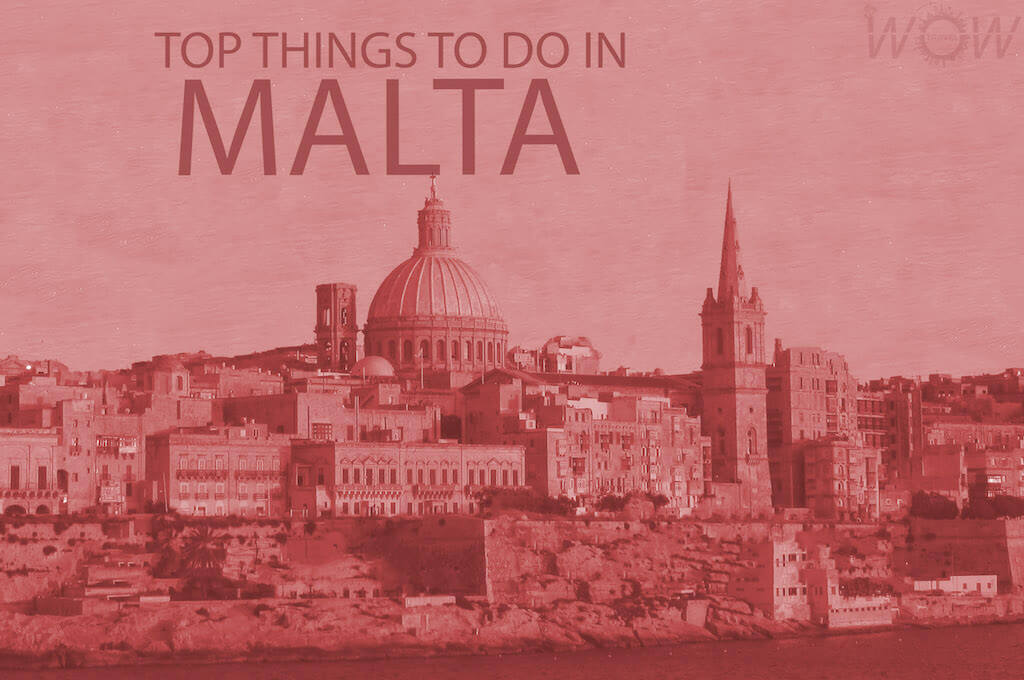 Malta is a small, island country in the Mediterranean Sea that lies just 50 miles south of Sicily, Italy. It has 7000 years of history with prehistoric temples, beautiful architecture with an ancient heritage, fossil-studded cliffs, glittering hidden coves and thrilling diving opportunities with its crystal-clear blue waters, some of the cleanest in the Mediterranean. With such great climate all year round, a low crime rate, friendly people, many restaurants, bars, cafes and a lively nightclub scene – you must give it a try. Here are our Top 10 Things To Do in Malta.

“The temple of Hagar Qim, excavated for the first time in 1839, dates to c. 3600 – 3200 BC. It stands on a hilltop overlooking the sea and the islet of Filfla. Just 500m away from Hagar Qim, further towards the cliff face, lies another remarkable temple site, Mnajdra, set in a hollow above the Southern cliffs. The surrounding area, which is typical of Mediterranean garigue and spectacular in its starkness and isolation, is designated a Heritage Park. Much of interest has been unearthed at Hagar Qim, notably a decorated pillar altar, two tablealtars and some of the ‘fat lady’ statues on display in the National Museum of Archaeology, Valletta. Mnajdra is probably the most atmospheric of all Malta’s temples. It is a complex site consisting of three temples overlooking an oval forecourt. The oldest temple is a simple three-apsed building which dates back to 3600-3200 BC. The most impressive of the Mnajdra temples is the third, with its largely intact façade and bench constructed in 3150–2500 BC.” Source: maltapass.com.mt

Discovered in 1902 on a hill overlooking the innermost part of the Grand Harbour of Valletta, in the town of Paola. The Hypogeum is an enormous subterranean structure excavated c. 2500 B.C., using cyclopean rigging to lift huge blocks of coralline limestone. Perhaps originally a sanctuary, it became a necropolis in prehistoric times.

Gozo and its tiny sister island Comino, offers some of the best swimming, snorkeling and diving in the Mediterranean. There are caves to explore such as the famous Calypso Cave, wonderful walks, UNESCO World Heritage sites, dramatic fortifications and the baroque architecture of the Knights of St John, the famous Knights of Malta. Not to mention a vibrant calendar of cultural events from grand opera to lively village festas. For more info: www.visitgozo.com

“With narrow, cobbled streets shrouded in an air of mystery, Mdina will snatch you away from the present and transport you back in time. Malta’s old Capital Mdina has been known under a range of different names based on its rulers and its role over a span of 4,000 years since it was founded. Mostly known as Citta Notabile (The noble city), this name suits her to a T since it has been home to Malta’s most noble and dignified families, some of which are descendants of the Norman, Sicilian and Spanish overlords who have made Mdina their home in centuries past. Embarking on this journey back in time, you will discover an astonishing mix of baroque and medieval architecture in its ever-winding streets, wonderfully adorned and preserved churches, majestic palaces and fortified walls that turn this silent city into an outdoor museum.” Source: airmalta.com

“Time stands still in the narrow, medieval byways of Mdina, as if humbled by the solemn majesty of the 17th-century cathedral that presides over them. Designed by vanguard Baroque architect Lorenzo Gafà, this unique edifice was five years in construction and is dedicated to St. Paul – the patron saint of Malta. Flanked by twin bell-towers, the cathedral’s imposing ochre facade opens into an awe-inspiring space bestrewn with marble, ornate masonry-work and richly-detailed side-chapels. The gilded arched vault within depicts the shipwreck of St. Paul in Malta as described in Acts in a series of breathtaking ceiling panel-paintings by the Manno brothers. Surviving work from the earthquake-ravaged Norman church over which the cathedral was constructed includes 15th-century Tuscan panel-art (now displayed in the Museum), a baptismal font dedicated to the conversion of St. Paul and the ancient portal door which now conducts to the vestry.” Source: maltacultureguide.com

Valletta, Malta’s capital and a World Heritage site, is nothing short of an open-air museum. It is a living experience of Baroque architecture, a monument donated by the Knights of St John nearly five centuries ago. Throughout the years, Valletta has welcomed emperors, heads of state, artists and poets and is now the permanent seat of the Maltese government. Dotted with quaint cafés and wine bars, the city is today one of Malta’s main tourist attractions, hosting among others, the majestic St John’s Co- Cathedral, the imposing bastions and a treasure of priceless paintings. It also provides a stunning snapshot of Malta’s Grand Harbour, often described as the most beautiful in the Mediterranean.” Source: cityofvalletta.org

The ״Malta at War Museum״ (MAW) is located at Couvre Porte, Vittoriosa (Birgu). It stands to document the great ordeal which the brave people of Malta and their defenders have endured during the dark days of the Malta Blitz (1940-43) in WW2.

St John’s Co-Cathedral is a gem of Baroque art and architecture. It was built as the conventual church for the Knights of St John. The Grand Masters and several knights donated gifts of high artistic value and made enormous contributions to enrich it with only the best works of art. This church is till this very day an important shrine and a sacred place of worship. It is also a venue for cultural events.

With great weather, clear and clean water sea, dramatic underwater drop-offs, intriguing caves, a variety of natural and artificial reefs, a healthy marine life and very professional diving schools. Malta is ranked number 3 in the world as a scuba destination.

Located 150 feet under the Upper Barracca Gardens and the Saluting Battery in Valletta, the Lascaris War Rooms represent one of Malta’s best-kept secrets from World War Two. It consists of an underground complex of tunnels and chambers that housed the War Headquarters from where the defense of Malta was conducted during the Second World War.