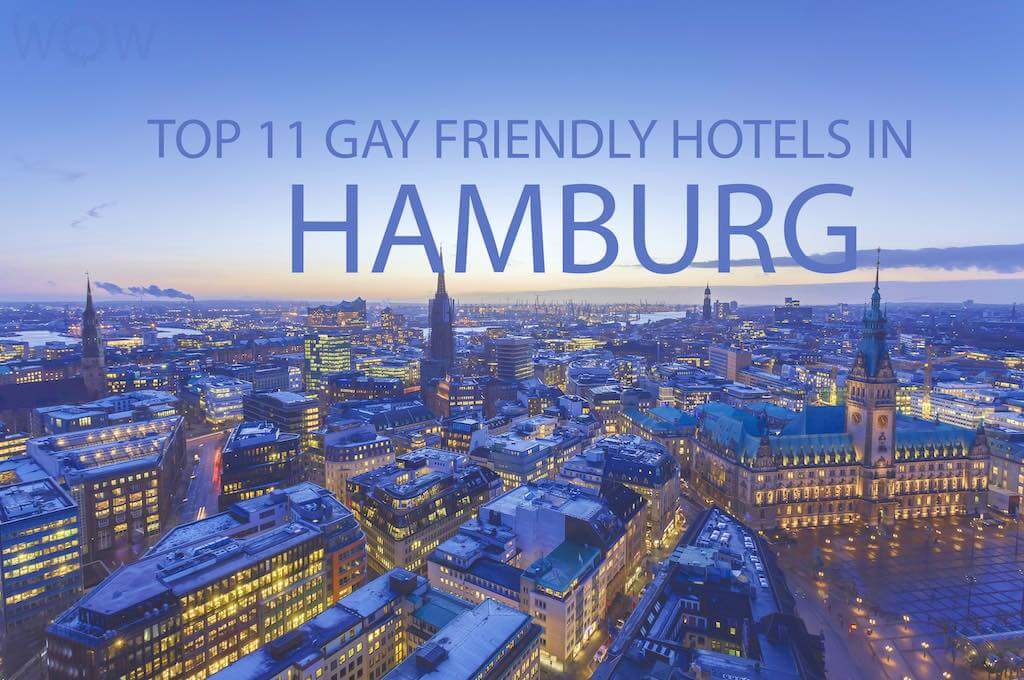 Germany’s second largest city has undergone a huge transformation since its early beginnings as the world’s port city. Hamburg’s gay scene may not be as big as that of Berlin or Cologne but it is alive and kicking. You’ll find plenty of gay hotels in Hamburg though you won’t find any ‘exclusively’ gay hotels here. With Germany being one of the most gay friendly countries in the world, almost all hotels in Hamburg openly welcome the LGBTQ community.

Hamburg’s gay life is centered around the hip St. Georg area so most gay travelers prefer to stay there, close to the action. St. Pauli also has a handful of gay bars and establishments but its biggest draw is the Reeperbahn red-light district. Apart from the gay things to do, Hamburg also has some top drawer tourist attractions that will keep you busy during the day. To get a better feel of the city, you can choose to go on a Private Walking Tour of he Old Town. Alternatively, you could enjoy a Small Group Sunset Cruise on Lake Alster before hitting the gay bars.

Whether you choose to stay close to the gay action or at the Hamburg City center where most of the city’s attractions are, we’ve got you covered with our reviews of the top 11 gay friendly hotels in Hamburg.

Although the 25hours Hotel HafenCity may not be the closest to the gay areas of the city, it is still one of the more popular gay hotels in Hamburg. This is probably because of its cool retro-themed design and welcoming atmosphere.

Airconditioned rooms equipped with various amenities such as a flat-screen TV, minibar, and Boom Bluetooth speaker combine a retro and modern design. The hotel also has a popular inhouse restaurant that serves seasonal dishes from various German-speaking regions.

Just a five-minute walk from the hotel is the Elbe Philharmonic Hall, renowned for its concerts. The Old Town district is also just 15 minutes away. The hotel’s location two minutes away from the Überseequartier Underground Station on the U4 line makes places that are farther away accessible. It’s about a 10-minute drive to the gay St. Georg area from HafenCity.
Check Rates & Book Now

Sticking true to its German translation which means ‘ruby,’ the ARCOTEL Rubin has a modern style, with deep red hues popping up everywhere. The hotel features stylish air-conditioned rooms outfitted with the latest amenities. It also has a fitness center and bar which specializes in rare gins from around the world.

The hotel’s location at a walking distance from Hamburg’s main train station means that getting around the city is easy. Since its location is just around the corner from gay St. Georg you’re just a few steps away from the gay nightlife. It’s a short walk to TOM’s Saloon gay cruise club, Bellini Bar, and the Dragon gay sauna from here. There’s plenty to see in and around the area for those interested in exploring the city.
Check Rates & Book Now

Just minutes from the Alster Lake and Hamburg’s main train station is the upscale Barcelo Hamburg. This modern hotel is extremely popular because of its proximity to many of Hamburg’s attractions as well as the gay nightlife. It’s just a six-minute walk to Kunsthalle Hamburg and about a ten-minute walk to the upscale Neuer Wall shopping area.

Rooms and suites at the hotel have minimalist decor with light wood floors and white comfy beds. Plenty of natural light streams into the rooms through the floor to ceiling windows which also offer great views of the surroundings. Sleek bathrooms have complimentary toiletries, hairdryers and glass showers with half doors.

A standout feature of the hotel is its stylish eatery and wine bar. The restaurant has a good selection of international dishes and a well-stocked wine bar. Although there is no spa or pool on site, the hotel offers a small fitness room and sauna.
Check Rates & Book Now

In the east of Hamburg in the heart of the rather colorful St. Pauli district, you’ll find the East hotel, a 4-star superior design hotel. A large rooftop spa, spacious rooms and a good location puts the East at the top of gay hotels in Hamburg.  With St. Pauli Subway station just a few minutes from the hotel, getting to the city center and St. Georg district is an easy commute. Gay club Babylon and WunderBar are also within easy walking distance from the hotel.

It’s hard to imagine that the stylishly designed hotel was built on the site of a former iron foundry. Comfortable and stylish rooms feature king-size beds and various other amenities. The ensuite marble bathroom is outfitted with a rain shower or bathtub. Guests can also enjoy massage services or a sauna. They also have free use of the oriental wellness and sporting area.
Check Rates & Book Now

Set in the heart of the city, Henri Hotel in downtown Hamburg puts you close to all the action. About a kilometer away from the hotel you’ll find two popular gay clubs, La Strada and Extratour. Other tourist attractions like the St. Petri Church and Hamburger Kunsthalle are within easy walking distance from the hotel.

Spacious suites and studios with hand-crafted furniture are what you can look forward to at the hotel. Featuring solid wooden flooring and equipped with plenty of amenities, the rooms at the Henri Hotel are designed for comfort. Some rooms feature a fully equipped kitchenette that can be used for a surcharge. Guests can also use the hotel’s sauna and gym.
Check Rates & Book Now

Hotel Hafen Hamburg is close to the lively Reeperbahn nightlife and just three minutes away from the River Elbe. Its location so close to the river provides guests with excellent views of the harbor and the city. The Landungsbrucken subway station located a few steps away gives guests easy access to the other parts of the city.

Comfortable and spacious rooms which are split between two buildings feature modern amenities. The old building which housed sailors in the past has a more maritime theme whilst the new building features bright modern rooms. An onsite restaurant and bar are also quite popular with guests. The bar, Willi’s Bierstube, is well known for its draught beers and cocktails.
Check Rates & Book Now

If you’re looking for something affordable with a touch of class, the Hotel Village is for you. This is one of the more popular gay hotels because of its location in St. Georg, and the old world Paris-esque charm that it exudes. However, this is not all that makes the hotel stand out. Up until the end of the 1980s, the hotel was the noblest and distinguished brothel in northern Germany.

Remnants of its racy past are visible in some of the rooms with silk wall coverings, canopies, and mirrors above the beds. Rooms have different categories and sizes. Guests can choose to stay in the Honeymoon Room, Double or Triple room, or in the Single room with a shared bathroom. All rooms have heating, complimentary toiletries and other amenities for a comfortable stay.
Check Rates & Book Now

Le Meridien‘s location right in the center of Hamburg makes it a popular choice with gay travelers. St. Georg district, the gay area in the city is within walking distance from the hotel as are the other attractions of the city. You’ll find plenty of shopping around the area too.

Modern rooms with wooden or carpet flooring are tastefully furnished and equipped with amenities. Some rooms provide spectacular views of Alster Lake and the surroundings. A great feature of the hotel is the indoor pool and Emotion Spa where guests can indulge in various treatments and massages. Guests can also enjoy a meal at the Heritage Restaurant and Bar located on the 9th floor.
Check Rates & Book Now

Another one of St. Georg district’s affordable gay hotels in Hamburg is the Motel One Hamburg-Alster. The stylish hotel is great value for money  especially because of its location. You’re within a short walking distance from the gay bars and clubs of the area. Also, less than a kilometer from the hotel, you’ll find the Außenalster Lake and Deutsches Schauspielhaus Theatre.

Offering panoramic views of Hamburg, the soundproofed and airconditioned rooms are comfortable and well equipped. Tastefully decorated ensuite bathrooms with a striking glass and granite design add to the comfort of staying here. Guests can enjoy a variety of drinks at the 24-hour bar which also doubles up as a breakfast room and lobby.
Check Rates & Book Now

At 108 meters, the Radisson Blu Hotel is the tallest hotel in Hamburg and the second tallest building in the city. You can expect some spectacular views if you choose to stay here. One of the best things about this gay hotel in Hamburg is that it’s pretty close to the gay nightlife of the area. Other attractions such as the Alster River and the Jungfernstieg Promenade are also within easy walking distance, making it one of the 11 Best Hotels in Hamburg.

Soundproofed rooms decorated in the style of a New York mansion are well equipped with modern amenities. Although the hotel does not have a pool, it has a fitness center with a sauna and steam bath. It also has Hamburg’s higest wine bar, Weinbar, which offers panoramic views of the surroundings.
Check Rates & Book Now

At the border of St. Georg district overlooking the Alster Lake is The St. George Hamburg. The hotel’s proximity to St. Georg district, the hub of Hamburg’s gay scene makes it one of the more popular gay hotels in Hamburg. Most of the gay bars and clubs are within walking distance from the hotel.

Besides its location, another reason why the hotel is so popular is because of its classy design. Elegant rooms and suites with a unique wallpaper design and extra designer touches add to the experience of staying here. Guests can also enjoy the facilities of the Marrakech style spa and sauna. An upscale Italian restaurant, a bar, and a fantastic rooftop lounge are some of the other facilities that you can look forward to at The George.
Check Rates & Book Now

Get Some Culture in Hamburg: