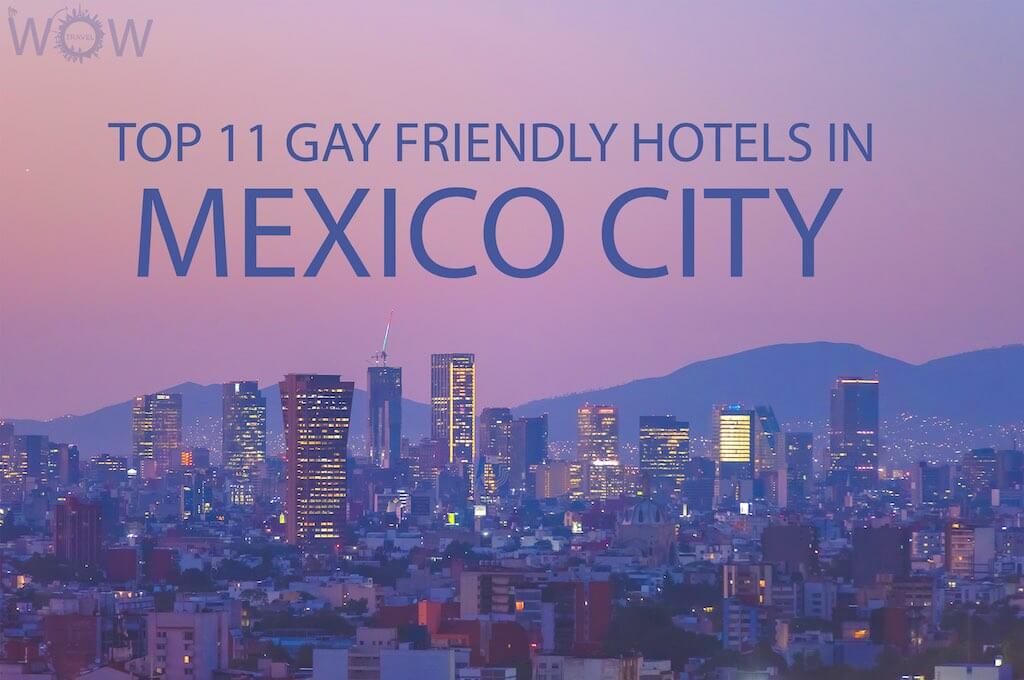 The high-octane metropolis of Mexico City is enthralling to culture buffs, foodies, and hedonists. The lovely Latin American city is all about eclectic neighborhoods, a complex, age-old history, and architectural splendor. The largely Catholic Mexico City is also beautifully contradicting, for it’s also an open-minded and vibrant gay mecca. In the last few years, the city has transformed into a queer oasis, as is evidenced by its LGBTQ establishments. Gay travelers are literally spoilt for choice when it comes to gay hotels in Mexico City. They range from B&Bs to luxury hotels and suit a whole lot of budgets too.

Most gay travelers to the city prefer living around the vivacious, pink-cobblestoned Zona Rosa, Mexico City’s lovely gayborhood. Gay nightlife in Zona Rosa blossomed in the early ’90s and is wonderfully queer and bacchanalian. Mexico’s gay rights movement, however, stirred way back in the ’70s, while its countercultural scene goes right back to the 1950s. The city’s wonderful queer life is showcased annually during Mexico City Pride, which is Latin America’s largest Pride festival. Its diversity and acceptance are also palpable during the Bearmex Bear Pride, the Vive Mexico circuit party, and the testosterone-fueled ManInFest. What’s more, the city also hosts the annual Latin America Pride.

Apart from all this, charming Mexico City has a whole lot of fascinating cultural places and attractions to explore. To give you an idea, here are some of the top things to do in Mexico City.

Hotel Geneve, also known locally as El Génova, is one of the best gay hotels in Zona Rosa, Mexico City. Housed in a historic building from 1907, the fabulous hotel lies just steps away from the best gay bars in Mexico City. Cabaretito Fusión, for instance, is two streets away, as are Kinky Bar and Vaqueros. If that wasn’t enough, Mexico City’s best sights and attractions along the iconic Paseo de la Reforma are 20 minutes away.

The historic hotel boasts of a stunning whimsical, yet elegant, lobby. The building is chock-full of museum-like displays of antiques and art which showcase not only its history but also its famous former royal patronage. The rooms, although a bit small, ooze old-world glamour with hand-carved red cedar headboards, and extremely comfortable beds. The Vintage Rooms, each dedicated to a different famous guest, are peppered with antique furnishings and radiate timeless charm.

The hotel isn’t one without comforts and amenities. There’s an on-site restaurant perfect to begin your Mexican food journey. Apart from the onsite cinema, sauna, and spa, there’s even a quaint ‘Phone Bar’ showcasing a collection of antique phones.

Another one of the fabulous gay Zona Rosa hotels in Mexico City is Room Mate Valentina, which is perfect for budget-conscious travelers. Vivid pop-art decor inspired by the space age and the swinging 60s sets the tone at this groovy hotel. The place is peppered with curvy ceilings, lit plexiglass partitions, and pods of eclectic geometric furniture. The lobby wall is adorned with a splashy, glass-shell rainbow, and the cafeteria with lime green walls is funky to the core. A hearty complimentary continental breakfast is a great touch. To top it all, the extremely friendly staff is armed with oodles of knowledge about Mexico City. Furthermore, Valentina is a 20-minute walk from Paseo de la Reforma and its sights. Rent bikes at the hotel and easily explore the neighborhood at your own pace.

Spacious rooms and suites at Valentina are a bargain for the prices. The decor is sci-fi retro and ranges from teen-queen garish to cutting-edge contemporary. Evenings are fantastic for exploring the vibrant Zona Rosa and its many gay venues. The low, comfy beds at Valentina ensure a good night’s sleep after an evening of partying.

The fabulous Red Tree House is consistently rated as one of the best, loveliest gay hotels in Mexico City. The charming, homey B&B lies in the leafy La Condesa neighborhood. It’s nestled right under the eponymous ‘Red Tree’ lit up with little red lights at night. A cozy living area with a painting of Frida Kahlo, a baby grand piano, and plush, comfy seating is wonderful for catching up with fellow travelers.

Rooms are divided between the main 1930s-era home and a smaller and quieter annex across the street. Guests can choose from 17 rooms in the main home, which encircle a tree-filled courtyard, and five rooms in the smaller one. While each room is entirely different in character, all of them are modern with comfy beds that you’ll want to melt into. What’s more, room rates include an exceptionally grand breakfast and beer/wine during the fabulous ‘wine hour’ which guests look forward to.

The Red Tree House is well-connected to various places in the city via the Chilpancingo metro station. Zona Rosa, for instance, is a 20-minute ride away. However, the cluster of attractions at Paseo de la Reforma like Chapultepec Castle, History Museum, Moctezuma baths, etc. is a mere 10-15-minute walk.

Stay at one of Mexico City’s first boutique hotels, the gay-friendly, neoclassic-geometric Hotel Condesa. The sleek and chic hotel lies in the trendy Condesa neighborhood in an early-20th-century refurbished apartment block.

Even though it has a business center, Condesa DF also features ultra-cool hangout spaces. These include the gym, the spa with hammam and hot tub, the showstopping rooftop terrace-bar. It’s decked with comfy reclining chairs perfect for feasting on food and sipping cocktails while gazing out to views of the city. Rooms are stylish with all mod-cons and are done up in earth-toned hues like cream and moss-green. Hand-woven Oaxaca rugs, vintage lamps, and white curtains and walls are perfect complements. Moreover, all rooms open onto treetop-shaded wooden terraces perfect for a quiet moment of solitude.

Hotel Condesa is perfectly positioned for gay guests here to enjoy sights of the city as well as the nightlife in Zona Rosa. What’s more, the subway station close to the hotel connects to the Historic Center of Mexico City in just 10 minutes. The Historic Center is also where you can indulge in this authentic food tour and dig into some delish Mexican fare.

Rooms at La Casona inspire romance with their charming artistic touches. Vintage furniture, antique curios and trinkets, and French doors opening onto quaint Juliet balconies lend them an inimitably charming vibe. What’s more, the rooms are incredibly modern as well, complete with mod-cons like climate control, Wi-Fi, and flat-screen TVs. All-in-all, it is perfect for gay couples looking for a romantic getaway in Mexico City.

For its fairly small size, La Casona has a good set of amenities, including a lovely terrace for relaxing and a gym with a steam room. Common areas are inviting and perfect for curling up with a book or some music. Also, the hotel rents out bicycles for travelers wishing to explore the neighborhood at their own pace. Finally, the intimate, romantic restaurant is perfect for sharing a quiet meal with your partner.

If you’re an intrepid explorer and your heart lies in the Historic Center of Mexico City, Downtown Beds is the perfect place for you to crash. The gay-friendly hostel is located on the first floor of the renovated, 17th-century La Condesa de Mirabelle mansion. It shares the building with its upscale sister property Downtown and allows dorm guests to use many of the hotel’s fantastic facilities.

The large outdoor rooftop pool with a sundeck, a whirlpool, bar, and an adjoining rooftop lounge is one of the trendiest gay meeting spots in the city. The lobby looking out to the tree-lined courtyard is a tranquil place to relax with a drink. There’s even a hearty breakfast to kick off your day in a fantastic way. What’s more, the building also houses two of the best restaurants in the city center.

Guests can choose between dorms and private rooms of different sizes. However, it’s the location that makes the hostel so popular with the adventurous LGBTQ traveling set. What’s more, this Historic Center of Mexico City, Ciudad de Mexico, is one of the highest capitals in the world. Downtown Beds is two streets away from some of Mexico City’s best sights, including the Aztecs Museum, Alameda Central, Revolution Monument, and even the La Ciudadela crafts market. In fact, staying at Downtown Beds allows you the opportunity to hop on to this fantastic 3-hour walking tour delving into Mexico City’s wonderful history. If that wasn’t enough, one of Mexico’s oldest gay clubs Marrakech Salon is five minutes away.

Galeria Plaza Reforma is one of the most convenient gay hotels in Zona Rosa, Mexico City for a hotel-like stay. The hotel’s enviably quiet location in a not-so-quiet neighborhood is its best asset. The hotel lies right across from the iconic war monument Angel of Independence and just one block from the Paseo de la Reforma. Zona Rosa’s cluster of gay bars is just two streets over. What’s more, it’s just a 20-minute ride to the Historic Center of Mexico City.

The Galeria Plaza features contemporary, sleek rooms with views of the city. There’s a small gym, and the hotel can even arrange for spa services. The rooftop pool bar boasts of even better panoramas of the city, coupled with great cocktails. It’s also a great place to meet and have a drink with fellow gay travelers before stepping out into Zona Rosa’s gay nightlife.

If you’re seeking an attentive and highly-personal gay-friendly stay in Mexico City, the 45-story Hyatt Regency will serve you well. The lovely hotel is located right on Paseo de da Reforma in the heart of the city’s culture, dining, and nightlife in Polanco. It borders the verdant Chapultepec Park and its fantastic posse of cultural attractions like the Anthropology Museum, Modern Art Museum, and more. Plus, the fabulous gay club Envy is a mere 10-minute walk.

The hotel boasts of particularly extensive amenities and services. Apart from full business services, it also has an impressive fitness center with a solarium and an indoor pool. The modern, savvy rooms feature all mod-cons one could possibly want, fantastic views of the city, lots of natural light, and no noise at all. So, those looking for a full-service gay-friendly hotel for their stay in Mexico City will find Hyatt Regency perfect. After all, it’s one of the 11 Best Hotels in Mexico City.

The lovely Hotel Suites Amberes lies two streets from the Angel of Independence, smack dab in the middle of Zona Rosa. Gay travelers looking to dive into Mexico City’s gay nightlife will love the hotel’s proximity to about a dozen gay bars and clubs. Even Paseo de la Reforma is just two streets away, placing most of the attractions near Chapultepec Park within walking distance.

Budget-conscious gay travelers will find the one/two-bedroom suites with kitchenettes and mod-cons very convenient. If that wasn’t enough, there’s even an onsite gym with city skyline views making working out a breeze. What’s more, the quaint rooftop terrace makes for a fabulous social space for meeting fellow travelers, complete with lovely, open-air views of the city.

Indulge in some Spanish luxury at the boutique gay-friendly Stara Hamburgo in the Juárez neighborhood in Mexico City. Not only are you well-connected to the Historic Center and Zona Rosa, but you’re also away from all the noisy bustle. The chic, eco-conscious hotel attracts trendy leisure travelers interested in meeting new people and engaging in new experiences.

Rooms at Stara Hamburgo are the height of simplistic decadence with cozy beds, tons of space, modern art, and great outdoor terraces. Dig into classic Mexican dishes and enjoy some sunshine at the lovely open-air restaurant. Furthermore, the spa is great for a relaxing soak, while fitness fanatics can sweat it out in the gym. Gay travelers looking for gay-friendly boutique-like accommodation with amenities will love the townhouse-style Stara Hamburgo.

Get Some Culture in: