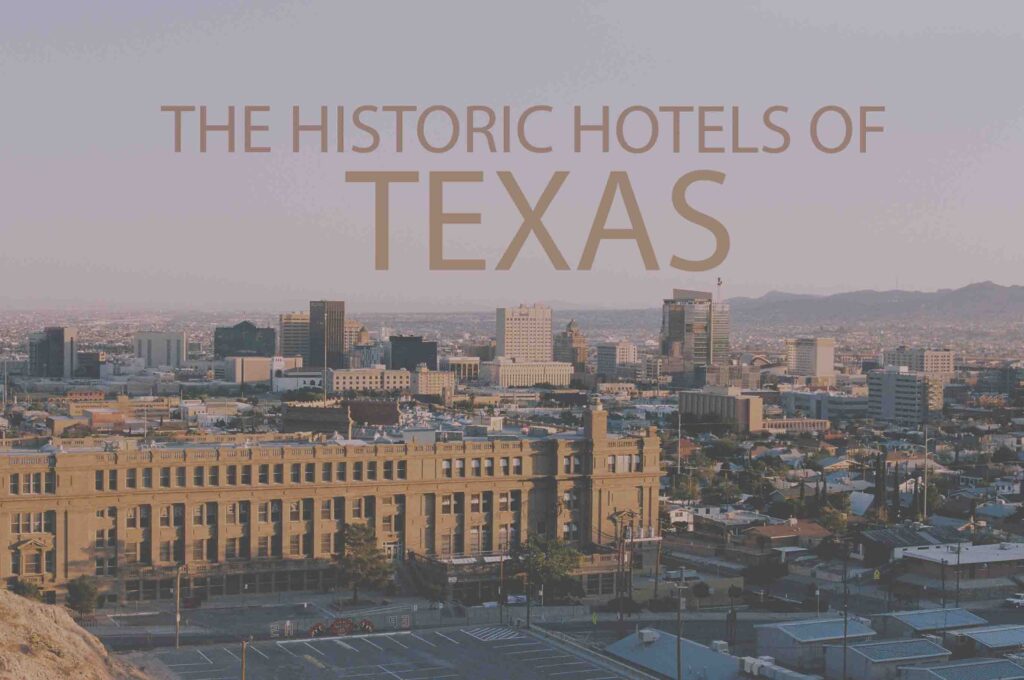 As the country’s second-largest state, Texas is brimming with a plethora of possibilities for fun and adventure. We think it’s safe to say that a trip to Texas will never be not exciting. And if you love old historic hotels, you’ll be thrilled to know that Texas has more than its share! Spending your nights at one of the historic hotels of Texas will let you experience something more personal, unlike staying at a regular chain hotel. That’s why we’re here to show you our top recommendations! From Austin, Texas, historic hotels to the ones in San Antonio, these historic hotels will let you immerse yourself in the culture and history of the past. Looking for a historic hotel in Houston? We have some great options, too! Without further ado, let’s get into it!

The first hotel on this list is C. Baldwin, Curio Collection by Hilton, a historic hotel in Houston. This hotel was named after Charlotte Baldwin, who was regarded by many as the “mother of Houston.” The title was given to her after she was named a co-founder of the original Houston. However, she didn’t have the chance to add her signature to everything she created in 1836. So, the hotel proudly honors Charlotte by putting her name on the door.

Set in Allen Center downtown, this hotel was renovated from the former DoubleTree Hilton. It boasts opulent suites with floor-to-ceiling windows, providing stunning views of the city skyline, as well as modern furniture and fresh linens. As one of Houston’s finest hotels, it also boasts facilities like concierge services, a nail salon, a fashion boutique, and more.

Originally constructed in 1894 as Pearl’s Brewhouse, Hotel Emma has been a San Antonio landmark for a long time. It was designed by August Maritzen, a Chicago architect, in the Second Empire style. The hotel itself was named after Emma Koehler, who ran the brewery for almost 20 years. However, she wasn’t the only Emma! in 1910, Emma Koehler was injured in a car accident, and her husband hired a nurse to attend his wife. Yep, the nurse is named Emma as well, who eventually became his mistress.

However, Emma, the nurse, would then complain her workload was too overwhelming, resulting in Otto hiring a second nurse, also called Emma! As you can imagine, everything was super complicated. Fast forward, Otto was shot dead in 1914 by Emma, the second nurse. However, she wasn’t found guilty, and Emma, the first nurse would then leave the brewery. Today, a stay at this hotel will allow you to relax in a historical atmosphere along with nice food and pure luxury.

As the name suggests, Hotel ICON is an icon of downtown Houston. This staple was built back in the year 1911 as the Union National Bank Building. It was one of the country’s first skyscrapers. Moreover, this hotel was made as a homage to the entrepreneurial spirit of the city. The neoclassical concept was a marvelous nod to Grecian design. The building then soon became a magnet for travelers, including some notable names like Jesse H. Jones, architect John Staub, law firm Fulbright & Jaworski, and more.

In 2004, this historic hotel in Houston was restored and transformed into the hotel we all know today. While the building retained its distinguished features and design, it also sported new facilities and interiors. Then, eight years later, the interior was refreshed to capture the contemporary energy of Houston’s modern atmosphere.

Another historic hotel in Houston is The Sam Houston Hotel. Opened in 1924, did you know that it’s the oldest operating hotel in Houston? On top of that, it’s listed on the National Register of Historic Places! When it first opened, it was a 10-story hotel that featured 200 guestrooms with small restaurants. Unlike some Austin, Texas, historic hotels, this property is built to accommodate budget-conscious business travelers or those who are looking for a place to stay before catching their train the next day.

We’re not kidding when we say this hotel was affordable. Back then, you could rent a room for only 2 USD per night! Pretty crazy, right? And if you add an extra 50 cents, you’d be able to receive a room with a private bathroom! But after several decades, the hotel’s guestroom configuration was reduced to its current 100. It was also updated with some state-of-the-art finishes!

The Hotel Havana is one of the top historic hotels of Texas that’s located on Museum Ranch, a peaceful section of San Antonio’s River Walk. This hotel was opened in 1914 by a local grocer Edward Franz Melcher. He had the vision to recreate the tropical allure of the hotel’s Caribbean namesake. Throughout the years, it served as a temporary residence for Melcher’s visiting vendors. Then, in 2010, the hotel was reopened under the Bunkhouse Group.

Though this hotel is listed on the National Register of Historic Places, it still manages to maintain its young spirit. With a calm Caribbean vibe and Mediterranean Revival architecture, this hotel is one of the most authentic hotels in the city. Even better, after its restoration, each guestroom is individually decorated, so no two guestrooms are alike.

Built during the mid-1800s, the Shady Villa Hotel was a rest stop for Sam Houston, George Custer, and Jesse James. The hotel was then renovated by the Bibbers in 1943 and reopened as the Stagecoach Inn. As a popular lunch spot for travelers, the Stagecoach restaurant gained popularity. Then, in 2015, the old property was restored by a group of developers. The Stagecoach Restaurant was the first to be rebuilt. The second phase focused on remodeling the hotel rooms, the outdoor event space, and a new pool and spa.

The hotel then would reopen in the fall of 2021 under new Management. The 48-room was also given a new name, which we’re all familiar with today. Like many other historic hotels of Texas, this hotel can’t escape the ghost rumors! It’s said that if you look and listen carefully late at night, you can see the ghost of Sam Houston on the balcony! Goosebumps!

Another great addition to the list of Austin, Texas, historic hotels is the Commodore Perry Estate. This 53-room boutique hotel originated from Edgar Howard “Commodore” Perry’s 1920s mansion, which was built in 1928 by Commodore and his wife. The 10,800 square feet house, which was built on 10 acres, kind of symbolized the Great Gatsby era. He and his wife would later sell the estate, which in 1947 became home to a succession of schools.

Furthermore, this hotel is seen as one of the best hotels in Austin, TX. There are plenty of spacious rooms, suites, and mansion suites for guests to choose from. Run by Auberge Resorts Collection, the hotel still has that vintage vibe. As one of the top historic hotels of Texas, each room is fitted with a classic 1920s-style bar cart and a heavy dose of Old World charm.

Opened in 1911, the Grand Galvez is a Galveston hotel that began receiving guests only 11 years after a hurricane nearly destroyed the entire city. Also known as the “Queen of the Gulf,” it had a lavish interior that reminded people of the Titanic. As one of the most historic hotels of Texas, it has welcomed icons like Presidents Franklin D. Roosevelt, Dwight Eisenhower, and Lyndon Johnson. Aside from that, there were also many celebrities who stayed here, including Jimmy Stewart, Frank Sinatra, and Howard Hughes.

Among all of the notable names, one of the more famous guests was Audra. She committed suicide in the 1950s by hanging herself in Room 501’s bathroom after discovering that her fiance’s ship had sunk in a storm. However, what’s ironic was that he arrived at the hotel a few days later! Over the years, many visitors have claimed unusual things happening in and near Room 501. If you want to test your adrenaline, you can always ask for the room!

In 1855, William Menger, a German immigrant to San Antonio, started a brewery that was only a stone’s throw away from the popular Alamo. Being one of Texas’ first breweries, it was easily one of the most popular destinations. In fact, it was so popular that it expanded to become a magnificent, 50-room hotel in 1859 to accommodate visitors. No wonder it’s also named one of the best historic hotels of Texas.

With its stained glass windows and wrought iron balconies, Menger Hotel immediately gained popularity among those traveling to and through San Antonio. Throughout the years, US presidents, cattle barons, and even a few unsavory characters have visited the hotel and bar. What’s more, Teddy Roosevelt also recruited his Rough Riders inside the bar! Today, this beautiful hotel offers 316 airy rooms close to the Alamo, the San Antonio Riverwalk, and other downtown attractions.

Austin is now widely known as the “Live Music Capitol of the World.” However, when The Driskill was opened, the city was merely a cow town! The hotel, which is one of the best Austin, Texas, historic hotels, was the vision of Jesse Driskill, a cattle baron. The hotel, which began receiving guests in 1876, hosted the inauguration ball for the Texas governor in 1887, which became a long-lasting tradition. However, in 1888, just a year later, Driskill sold the hotel as 3,000 of his cattle were dying.

Like many other Austin, Texas, historic hotels, the hotel has changed hands several times and undergone plenty of restoration projects. But like other historic hotels of Texas, this hotel is rumored to be haunted! According to the rumors, two newlyweds hanged themselves in Room 525. Additionally, a woman killed herself on the fourth floor, and a little girl died while playing a ball on the grand staircase. Aside from being called one of the best historic hotels of Texas, it’s also named one of America’s spookiest hotels!

Wondering which hotel is called the best historic hotel in Houston? Well, it’s none other than The Whitehall Houston! This hotel is set in the heart of the city’s Central Business District, offering an unrivaled location as it’s close to Houston‘s top business and leisure spots. They include the Toyota Center, Rice University, the Theater District, and more. As Houston’s original landmark hotel, it boasts mid-century architecture and gracious Southern hospitality. Better yet, the award-winning cuisine is to die for.

Since 1963, the hotel has been adorning Houston’s skyline. After it was opened, it quickly established itself as one of Houston’s most stylish and popular hotels. Thankfully, it remains so to this day. High-profile guests like Bob Dylan, Led Zeppelin band members, and Sonny and Cher have all spent their nights at this hotel as well. Because of that, it’s named one of the top historic hotels of Texas. In 2013, Sotherly Hotels acquired the property. Then, in 2014, it began a huge renovation and rebranding of the hotel, making it the hotel that we all love today.

Recommended Things To Do in Texas