The 10 Best Ski Resorts In The World (By Categories) 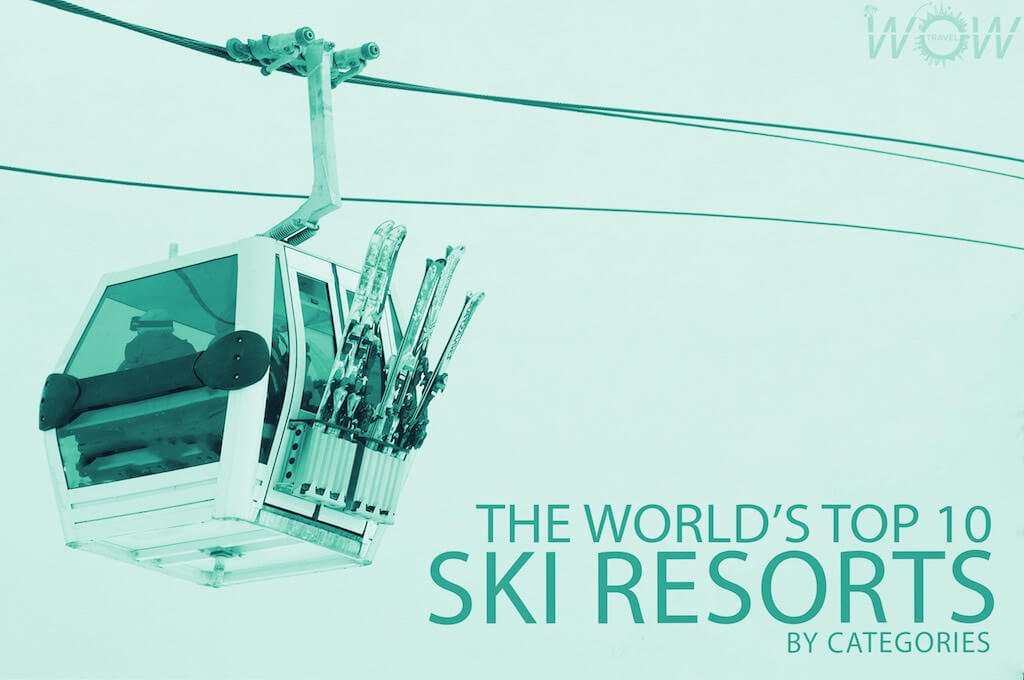 Skiing was once considered a luxury pastime, only accessible to the wealthiest of winter-enthusiasts. Nowadays, skiing is a popular winter sport enjoyed by the masses, which draws various crowds to the different ski resorts in the mountains around the world.

It’s no surprise either, since skiing and other winter sports are great fun. When paired with a top ski resort with plenty of after-ski activities it’s even more fun!

In this post, we cover the best ski resorts in the world in different categories. So, if you’re looking for a top ski resort where you can enjoy your time both on and off the slopes, you’re in the right place!

A day of skiing or snowboarding on the mountain isn’t complete until you have a night out on the town. Après Ski is one of the activities to do during your ski trip and includes partying from sunset until the late hours of the night, following an exciting day on the snow. St. Anton is considered on the best ski resorts in Europe, but is even more famous for its party scene. St Anton’s vibrant après ski includes the legendary Krazy Kanguruh and Mooserwirt bars which are located on the slopes above St Anton and many more après ski bars and restaurants in the village. Also, the village hosts a variety of live music shows and festivals during the winter skiing season.

This exclusive and well-known ski resort is considered one of the most luxurious in the world. From royal polo matches on the frozen lake to abundant five-star hotels and Russian billionaires flying directly into the local airport, St. Moritz’s luxury credentials are impeccable. But there’s good and varied skiing too, with the advantage that many resort visitors will be intent on celeb-spotting, leaving the magnificent peaks to the keen skiers.

Easily considered one of the best snowboarding destinations in the world, and not without reason. This resort hosted the 2010 Winter Olympics (with Vancouver). Two huge mountains surround the skiing village and include 37 lifts accessing over 8000 acres of varied and challenging terrain, amazing backcountry access, extreme bowls, high steeps, five terrain parks, a superpipe and a boardercross track. Definitely one of the best ski resorts in the world

After taking a 40-minute climb to the top of this massive 10,500-foot mountain via Téléphérique cable car, you are met with the harsh realization that you’re completely on your own; there are no designated ski runs, no grooming, and no ski patrol. Many visitors prefer going with a mountain guide, and the more extreme skiers can choose from about 7,000 feet of various vertical drops.

This famous village sits right below the iconic Matterhorn Peak, and is considered the epitome of Swiss mountain tradition. Zermatt is a car-free village in the upper Valais, one of the alpine cantons of Switzerland. It’s probably best known as a platform for skiing and mountaineering, especially on the majestic mountain which towers above the village, the Matterhorn. The surroundings are breathtaking but this comes at a price: accommodation in Zermatt is among the most expensive in Switzerland. Make your visit unforgettable by staying at one of the 11 Best Hotels in Zermatt.

Does size matter? When it comes to skiing, it does. More than half of the ten largest ski areas in the world are in France. The 3 Valleys is home to several world famous resorts including Meribel, Courchevel, Les Menuires and Val Thorens and includes over 600 kilometers of runs making it one of the best ski resorts in the world.

Some people don’t ski, and that’s fine so long as you’re at the right resort. Montage Deer Valley gives visitors the opportunity to explore wintery outdoors without skiing. Activities include snowshoeing, tubing, ice-skating, and snowmobiling. Also, the Utah Olympic Park at the resort allows the public to experience the high-speed Olympic bobsled.

La Plagne has built up a great reputation over the years for being a resort that’s perfectly suited to the needs of skiing beginners. Of the 132 pistes located at La Plagne, 10 of them are green and 73 of them are blue. What this means is that beginners are able to easily mix up a variety of slopes to practice on, before hitting the more difficult ones. Another great thing about La Plagne is the quality of ski schools, which is essential for beginner skiers.

One of the best skiing, in terms of scenery and budget, is in Slovenia. This tiny country, just half the size of Switzerland, has earned the nickname ‘Miniature Europe’ in such is the diversity of its stunning landscape. Vogel, one of the better-known ski resorts, is located in Triglav National Park above the Lake Bohinj.

Skiing isn’t only for winter. Generally set at 2,500 meters (8,200 ft) or higher, glacier ski areas benefit from the low temperatures at altitude, especially at night, so that you can expect smooth groomed runs in the morning. The Hintertux is one of the few remaining glaciers to open 365 days a year. This is Austria’s only year-round ski area, and offers 60 km (37 miles) of varied pistes for sunny summer skiing.