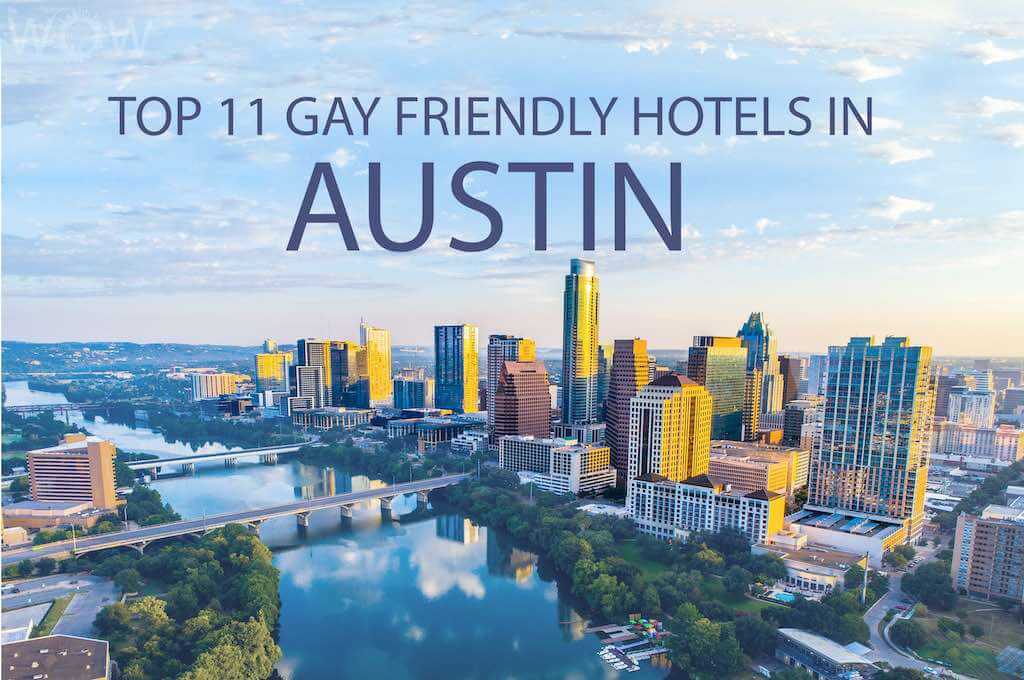 The ‘live music capital of the world,’ Austin, is definitely one of the most gay friendly places in America with its progressive, liberal approach and creative mindset. Touted as one of the ‘Gayest Cities in America,’ Austin is one of the most popular destinations in the South among the LGBT community. As such, you’ll find plenty of LGBT hotels in Austin. Many of these are clustered around downtown and the South Congress neighborhoods where many of the gay bars and clubs are located. However, there are no exclusively gay hotels in Austin but plenty of gay friendly options to choose from.

Austin’s tourism is booming because of its unique mix of cowboys and hipsters, great food, stunning natural attractions, and abundance of live music venues. A great way to experience Austin’s music scene is on the Austin Live Music Crawl. If you’re interested in seeing the sites and learning more about what makes Austin tick, we recommend the Austin Art Walk.

The city also hosts a number of annual events that bring in a deluge of people. If you’re going to be visiting Austin during any of the festivals, bear in mind that hotels fill up quickly and prices skyrocket.

The W Hotel chain is no stranger to the LGBT community because of its gay friendly hospitality and openness. Like its counterparts in other cities such as Barcelona and Miami, the W Austin is one of the more popular LGBT hotels in Austin because of its location. Situated in downtown Austin just a few blocks south of the gay strip in the Warehouse district, this swanky 37 story hotel is a magnet for gay travelers.

The W has a minimalist vibe but maintains its tasteful style throughout the hotel. Guest rooms incorporate silver and blue tones accentuated by red settees. All rooms have modern amenities like iPod docking stations and espresso machines. Wifi, however, is charged in rooms but is free in common areas. Stylish ensuite bathrooms are stocked with Bliss spa products.

W’s WET Deck on the 4th floor is a big draw for locals on the weekends with its adjacent bar and lounge chairs. On the same floor, you’ll also find the spa and fitness center.
Check Rates & Book Now

With a beautiful location in downtown Austin near the Lady Bird Lake and in close proximity to every kind of attraction, the Four Seasons is one of the more luxurious LGBT hotels in Austin. It’s not only a favorite with the gay community but also with Austin’s elite. Many celebrities have been spotted here enjoying lunch or indulging in some Austin-style pampering.

An elegant lobby with a sophisticated Southwestern style decor greets you as you enter the hotel. The grounds of the hotel are also impressive with an expansive green lawn. However, the rooms are a slight let down when compared to the rest of the decor. Although they’re clean and comfortable they lack the ‘oomph’ factor that’s visible throughout.

Other amenities at the hotel include a fitness center, an outdoor saltwater pool with lounge chairs and a top-class restaurant. The hotel’s spa is rated as one of the finest in Austin.
Check Rates & Book Now

This intimate ‘bungalow style’ boutique hotel turns the phrase ‘everything’s bigger in Texas’ on its head. Built in 1939 as a motel, the Hotel San Jose is stylish with a minimalist design. The best part about the hotel is its location in the center of South Congress, one of the trendiest neighborhoods in Austin. Some of the most iconic music venues in the state are located in SoCo. You’ll find plenty of funky clubs and restaurants in the vicinity of the hotel.

Guests can borrow different items from the hotel such as videos, Polaroid cameras, bicycles, and an excellent music library. The rooms are minimalist yet chic and come equipped with a number of amenities. Guests can also relax at the small swimming pool or the outdoor lounge that serves drinks and snacks.
Check Rates & Book Now

There is no shortage of classy LGBT hotels in downtown Austin as is evident from the Hyatt Regency and other swanky hotels gay friendly hotels in the area. The hotel has a great location on the shores of Lady Bird Lake. Predictably, the views of the lake and the city skyline are quite stunning from the hotel. It’s a 10-minute walk to the center of downtown from the Hyatt while the Sixth Street Entertainment District is about a 15-minute walk.

Public spaces at the hotel are lit up by the 17-story sky-lit atrium and huge floor-to-ceiling windows. Guest rooms received a complete makeover in 2016 and it shows. Spacious rooms decorated in soft neutrals offer great views of the lake and the city. The outstanding feature in the decor of the rooms is the black and white music theme artwork. Complimentary toiletries and a host of other amenities are available for guests’ convenience.

The Hyatt is a popular event space and has a ballroom on the 17th floor. Leisure spaces include an outdoor pool and whirlpool, fitness center and three dining options.
Check Rates & Book Now

The gay-friendly Kimpton Hotel brand is no stranger to the LGBT community with luxurious properties in cities like Portland, Washington DC, and London. One of the newest gay hotels in Austin, the Kimpton Hotel Van Zandt has a fantastic location in the Rainey Street Historic District. It’s less than a kilometer away from the nightlife of Sixth Street and 200 meters from the Austin Convention center.

Like its counterparts in other cities, the Kimpton has a stylish and sophisticated appeal with a host of amenities. The rooms here are spacious and tastefully decorated in calm blues and cool grays with wooden furnishings and bronze accents. Guests can choose between various categories of rooms. The Spa guestrooms with a soaking tub and beautiful views are extremely popular. Of course, if you want to up the ante on luxury, you could choose the Presidential Suite.

It’s a 10-minute drive to the South Congress and about a 20-minute drive to downtown from the Wyndham Garden which makes it a great base if you prefer to be a little away from the noise. The five-floor hotel has a rustic Texas charm and is popular with business travelers and families. As such, it has a laid back and quiet vibe putting it high on the list of LGBT hotels in Austin.

Cozy, bright rooms have a Southern-inspired flair but can seem a little dated. However, modern amenities and comfortable beds compensate for the decor. Spacious bathrooms with shower/tub combos are stocked with free toiletries. What stands out about the hotel is the decent-sized outdoor pool with a hot tub, and the restaurant and bar.
Check Rates & Book Now

The Westin‘s location just a half a block from Austin’s gay district makes it one of the more sought after gay hotels in Austin. It’s also a block away from the vibrant Sixth Street, the city’s main party venue. Besides the vibrant nightlife, other attractions in the city are also within easy walking distance or a short drive away.

This classy and contemporary hotel features a vertical garden wall, ceilings with floral cutouts and stylish guest rooms. Spacious guest rooms have modern conveniences and ensuite bathrooms. What guests love about the hotel is the rooftop heated pool with sun loungers and a chic pool bar. Although the hotel does not have a spa, it has a 24/7 gym. It also has an onsite Southern restaurant.
Check Rates & Book Now

For those who love a bit of history, The Driskill provides just the right dose. Built in 1886, the beautifully restored hotel is representative of a bygone era. Its location in the heart of the famous Sixth Street makes it a popular choice for LGBT hotels in Austin.

The Driskill is an unmistakable landmark in a sea of modern buildings with its stately 19th-century architecture. Its interiors are as impressive with towering columns and a stained glass ceiling in the lobby. Elegant guest rooms feature high ceilings with a ceiling fan and furnishings that reflect the hotel’s history, without feeling dated. The Victorian Suites in the original building are especially impressive.

Although the hotel is not big on amenities it has a decent-sized fitness center, plenty of meeting spaces and a highly acclaimed fine-dining restaurant and bar.
Check Rates & Book Now

Upscale gay hotels in Austin are definitely not in short supply and gay visitors to the city are spoiled for choice. Omni Hotel in downtown Austin is another upscale hotel within easy walking distance from the gay nightlife in the city’s business sector. You’ll find the main clientele here are business travelers and couples who frequent the rooftop pool and bar.

Rooms at the Omni have Texas-inspired touches with leather studded chairs and cowhide ottomans. These are more pronounced in the executive suites which feature Texas themes. Most rooms overlook the glass and steel atrium so there’s no view as such to look forward to.

A stylish outdoor rooftop pool and lounge area with views of the city is the standout feature of the hotel. It also has a large fitness center and a restaurant and bar.
Check Rates & Book Now

Just minutes away from the main attractions in the city you’ll find this urban eco-oasis, the Park Lane Guest House. It’s just two blocks from South Congress Avenue and an easy stroll to downtown from here. This gay friendly Bed & Breakfast run by a lesbian couple is a hidden gem amidst all the swanky buildings. In service for over two decades, this B&B has gradually become a favorite with the LGBT community.

The guest house offers four elegant cottages that range in size from the small Vicky House to the large Garden Cottage. A mosaic glass tiled pool in the shade of an oak tree, organic gardens and onsite massage therapy is what you can look forward to here. Guests can also enjoy a freshly prepared organic vegetarian breakfast.
Check Rates & Book Now

The old school Austin Motel is one of the few remaining ‘tourist courts’ that opened everywhere in the country during the mid-20th century. Opened in 1938, the hotel has since adapted to the times but retains its vintage vibe. Its location along the trendy stretch of South Congress and retro vibe, pushes it to the top of affordable LGBT hotels in Austin, with a growing gay clientele. Within walking distance from the hotel, you’ll find many popular gay hangouts and night spots.

The bright retro-themed rooms may not suit everyone’s taste, but they’re equipped with modern amenities to enhance comfort. Each room is unique in decor with unpretentious well-chosen antiques, framed paintings, and offbeat murals. Guests can choose from various categories of rooms ranging from very compact too larger suites. The kidney-shaped pool with its loungers is a popular spot. Other onsite amenities include an open-air eatery, bike rentals, and Joann’s Fine Foods.
Check Rates & Book Now

Get Some Culture in Austin:

Austin may be one of the gayest cities in the United States, but it does not have a bathhouse. If you enjoy a traditional sauna then your best bet would be at one of the hotels.