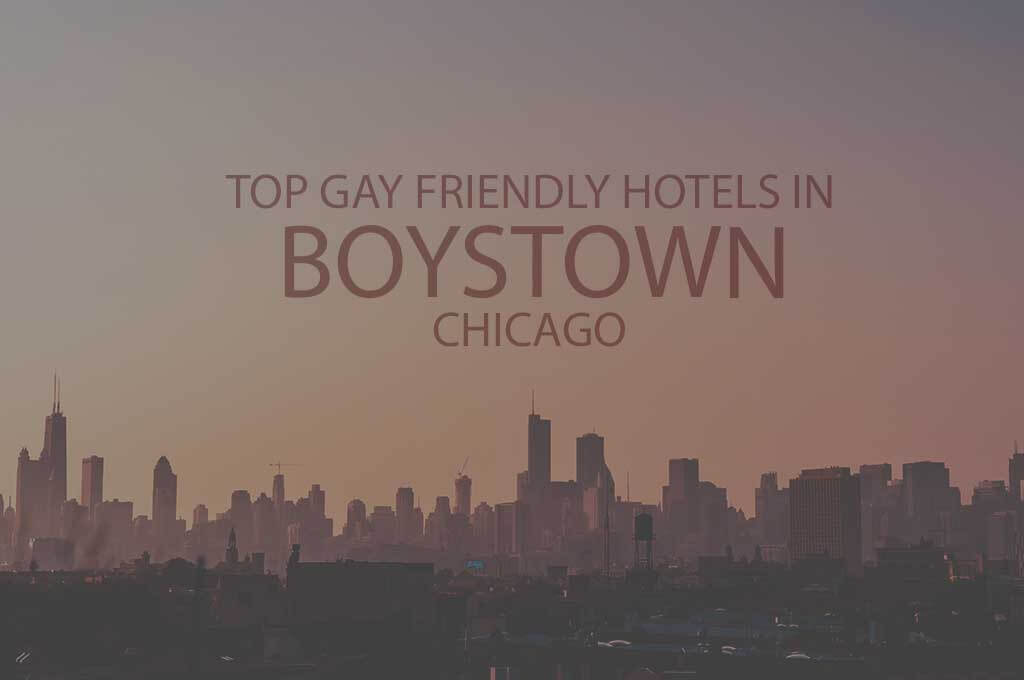 Lesbian, gay, bisexual, trans, queer; no matter how you identify, you’re sure to feel right at home in Boystown, a.k.a. Northalsted, Chicago’s vibrant gay neighborhood. Not only is it the United States first officially recognized gay village, but it’s also the country’s oldest gay neighborhood. Furthermore, it’s home to Chicago’s active LGBTQ+ community. So, it’s only natural that the largest concentration of Chicago’s LGBTQ hotels is the many, many gay hotels in Chicago Boystown. The eclectic community, whose actual name is East Lakeview, is also home to the Midwest’s largest LGBTQ community center, the Center on Halsted. It welcomes more than 1,000 people every day! What’s more, Boystown also hosts many annual LGBTQ+ events, including Chicago Pride, the Chicago Pride Fest, and even the Northalsted Market Days. And, of course, it’s home to some of the best and most diverse gay bars you’ll have ever seen!

There’s a lot more to see and do in and around Chicago besides its bustling gay scene. Firstly, it’s one of the world’s top cities with the most skyscrapers; case in point the Willis Tower, one of the world’s tallest skyscrapers. Secondly, Brookfield Zoo in the city is amongst the world’s largest zoos. If that wasn’t enough, Chicago’s two sights, the Navy Pier and Millennium Park, are amongst the USA’s top tourist attractions. So, what are you waiting for? Pack your bags and choose to stay at one of these 11 amazing gay hotels in Chicago Boystown.

City Suites Hotel, which sits right next to the wild pansexual club Berlin, is one of the best gay hotels in Chicago Boystown. The (almost) all-gay hotel celebrates its central Boystown location with distinctive Art Deco styling. All rooms and comfortable and warm, with plush beds, sitting areas next to windows, and modern bathrooms with shower space for two. Go for their suites if you have a little more to splurge, as they come with bathtubs and robes in the bathrooms. Since their prices are reasonable, it’s a very popular choice with gay travelers who come to Boystown on a budget. But, despite their reasonable prices, it still offers a ton of freebies, including 24-hour coffee and tea in the lobby, afternoon cookies, and a continental breakfast.

Hotel Zachary lies on the northwestern fringes of Boystown and is a fabulously modern gay-friendly hotel. It’s perfect for LGBTQ+ travelers who want to be close to all the Boystown fun but not be overwhelmed by it/ The hotel draws inspiration from legendary Chicagoan architect Zachary Taylor Davis, who designed Wrigley Field. That’s why rooms and suites at this boutique hotel blend old and new, comfy and refined, familiar and unique, all at once. Discerning travelers will love the stylish Art Deco touches in the lobby, such as exposed brick walls and pipes and lofty, high ceilings. While there’s no spa or pool, there’s a light-filled gym where you can work out and check out people! Plus, a small second-floor library has lots of outdoor decks and indoor seating nooks.

The Chicago Hotel Collection Wrigleyville is yet another of the best gay hotels in Chicago Boystown. The spunky hotel is rooted in history but has futuristic touches to its intimate yet luxury lodgings. Since the boutique hotel has just 21 rooms and suites, staying here makes for an exclusive experience that discerning gay travelers will love. While some have traditional queen/king set-ups, others have bunk beds and terraces. Nevertheless, they all have sleek black-and-white bathrooms, mosaic-tiled entryways, and high-end bath products. What’s more, the beds are comfortably springy and practically invite you to try them out! A restaurant serves all meals during weekends, but there’s a fabulous rooftop bar where you can pre-booze before heading out to explore the Boystown gay scene.

Imagine a hotel that has the feel of an English estate but is innately American; that’s the Majestic Hotel for you. The gorgeous Boystown hotel is perfect for gay travelers who’re obsessed with baseball, as the hotel celebrates by putting the sport front and center everywhere. Your day begins with a fabulous complimentary continental breakfast, with freshly baked cookies following in the afternoon. And, of course, tea and coffee are complimentary and available 24 hours a day! What’s more, the hotel even offers free access to a full-service gym close by to all guests. You’ll love the stylish rooms and suites, which have comfy beds and huge windows with gorgeous views of the lush neighborhood. Pre-booze with your significant other at the sitting areas besides the windows before you head out to explore Boystown’s gay scene. That’s why it’s one of the top gay-friendly hotels in Chicago.

Are you traveling to Chicago on a budget? Then the Wrigley Hostel is one of the best gay hotels in Chicago Boystown. If you want to save your money for happy hours and gorgeous hunks, then this hostel has some of the cheapest beds in town. One of the biggest selling points of this fun and fabulous gay-friendly hostel is its freebies; think nightly pizza dinners and free pancake-and-waffle breakfasts. What’s more, it features plenty of fun games such as darts, ping-pong, and a pool table where you can meet new people.

Plus, there are tons of communal areas such as the lounge, the full kitchen, and the outdoor deck with a barbecue grill. You have the choice of comfy bunk beds across four/six/eight-bed dorms. But, the best bit is that chicago’s gay bars are within a 10-minute walking distance. So, no matter how late you party, you can always come back and catch up on sleep.

The BEST WESTERN PLUS Hawthorne Terrace Hotel lies right in the heart of the Boystown neighborhood. In fact, it’s surrounded by some of Boystown’s best gay bars. So, if you want to party all night long in Boystown but come back to quiet digs for a good night’s sleep, then this Best Western outpost is for you. Rooms and suites are awash in neutral hues and stocked with much-needed necessities such as plush beds, modish bathrooms, and Keurig coffeemakers. If you’re a large group or want to splurge, the suites even have full kitchens and whirlpool tubs! A basic gym aside, the hotel serves a sumptuous and delicious complimentary breakfast that’s sure to cure your hangover, if any. During Pride and other gay festivals, the front terrace is “the” place to see and be seen, especially in summer.

Do you prefer bed and breakfasts to traditional hotels? Then House 5863 Chicago’s Premier B&B is one of the gorgeous gay hotels in Chicago, despite not lying in Boystown. It lies in the city’s other gayborhood, Andersonville. The charming bed and breakfast features just six rooms, making staying here an intimate and exclusive experience. What’s more, every room features seating nooks, flatscreen TVs, and private bathrooms for your convenience. Begin your day with a delectable bed and breakfast at the dining table or in the garden when the weather is nice. Evenings are best spent sipping coffee in the shared lounge, on the porch, or in the lush gardens. Finally, wind up the day with a grilling meal around the barbeque with your newly made friends here.

Who wouldn’t like to stay at a charming gay-owned Victorian bed and breakfast right in the heart of Boystown? Welcome to Villa Toscana, a Victorian-style B&B that lies just a few steps from the vibrant gay nightlife of Boystown. So, it’s perfect for LGBTQ+ travelers who want to explore Boystown and would also like to live in characterful digs in Chicago. The 1892-built B&B boasts a beautiful front yard where you can have breakfast in the morning and relax during the day. Thanks to the free Wi-Fi, you can stay connected and search about everything you want to explore in the neighborhood. Choose from eight kinds of rooms, each of which has comfy beds. Four of them have private ensuite bathrooms, of which some even have bathtubs! Digital TVs, antique decor, and central air-conditioning complete the rooms.

Hotel Lincoln is of the best gay hotels close to Chicago Boystown. The best bit is that it’s close to Boystown’s gay scene, and is just a 10-minute walk away. This gorgeous hotel sits in a historic building, and you have a choice of spacious rooms and suites to choose from. What’s more, they have all comforts such as tea/coffee-making facilities, iPod docking stations, flatscreen TVs, and free Wi-Fi. The rest of the hotel is equally impressive, especially the restaurant which serves delicious meals including a fabulous continental breakfast. But, the best of them all is the rooftop bar, where you can pre-booze and drink sundowners before heading out to explore Boystown’s gay nightlife.

Discerning gay travelers who love characterful digs will love the Guesthouse Hotel in Andersonville. The place has a compelling backstory; it began life as a condo before transforming into holiday rentals. Today, you get to choose from one/two/three-bedroom apartments, all with oodles of natural light, wooden floors, and vibrant throw pillows and rugs. Full kitchens and plush bedrooms aside, the apartments even have kitchen islands, and some bathrooms even have bathtubs. Despite having no restaurant or bar, there’s a boutique shop in the lobby and a small gym. But, there is a stunning rooftop deck with gorgeous skyline views and even a library in the lobby. If that wasn’t enough, you can even order in-room spa treatments.

The Willows Hotel is one of the most wonderful old-world gay hotels in Chicago Boystown. This 1920s-built Lakeview inn is drenched in French Provincial style, right from the lobby to the room. Choose from just 51 rooms, each of which has an honor bar with midnight munchies and a comfy sitting area. Plus, every room has a bathtub! Downstairs, the hotel is equally impressive, with the lobby laying out hot tea and coffee 24/7 and even cookies laid out at 4 p.m. every day. Begin the day with a complimentary continental breakfast before heading out to explore the leafy lanes of Boystown and Chicago beyond.

Chicago Boystown is Chicago’s “gayborhood,” as it’s called. When you step into this neighborhood, you’ll immediately notice the 20 rainbow pylons adorning the place. It was the city government’s way of officially recognizing a gay neighborhood and the first time it has ever happened. Since 2019, 40 illuminated bronze plaques dedicated to historically important LGBTQ+ figures enhanced the pylons. These included Alan Turing, Sally Ride, Jane Addams, and Frida Kahlo, among others. This place, now known as Legacy Walk, is the only outdoor museum dedicated to LGBTQ history in the world! Finally, Boystown not only has gay bars and clubs but also gay-owned businesses, hotels, but also the only gay sauna in Chicago.

There’s another gay-friendly hub coming up in the city in the ethnic and beautiful Andersonville neighborhood. The area is famous for its Swedish heritage and emanates inimitable small-town charm. What’s more, it’s home to a huge rainbow population and has lots of gay-owned and operated restaurants and hip indie shops.

Here are the best hotels in Chicago to get you started.