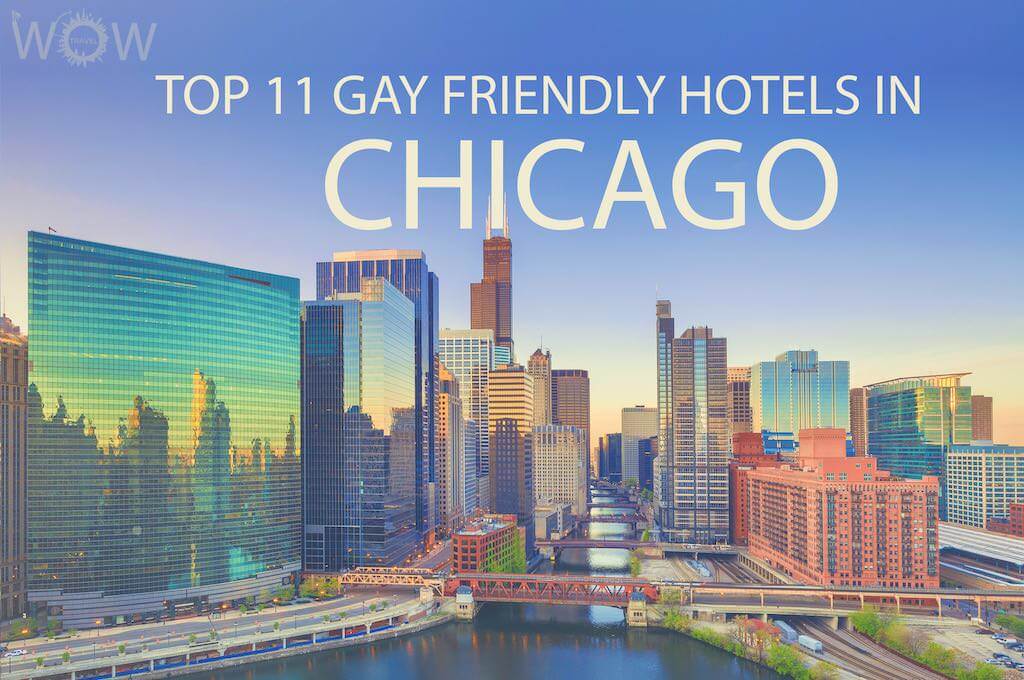 America’s ‘Windy City’ may not be high on the travel itinerary of many from the LGBT+ community given its ‘low key’ gay image, but you’ll be surprised with all that Gay Chicago has to offer. If you’re looking for exclusively gay hotels in Chicago you may be a little disappointed as there are none. However, there is no dearth of gay lodging in Chicago and plenty of gay friendly hotels to choose from. While most LGBT people zero in on Boystown the gayborhood for accommodation, there are only a handful of hotels here. Nevertheless, the gay village’s proximity to downtown gives you a wider range of hotel options.

Much like its namesake Boyz Town in Pattaya, Chicago’s gayborhood has a large number of venues that declare themselves ‘straight-friendly,’ a clear indication of the sheer number of LGBTs here. Another neighborhood with a large rainbow population is the ethnic Andersonville, famous for its Swedish heritage. You’ll find a large collection of hip shops and restaurants in this area.

If you can tear yourself away from the gayborhoods, there is a lot to explore in the city, especially in downtown Chicago. You can start with one of the most spectacular views of the city from the 103rd floor of the famed Willis Tower Skydeck or better still, do something novel by going even higher on the City Lights Helicopter Experience.

Set in downtown Chicago, minutes away from the iconic shopping on Michigan Avenue’s Magnificent Mile is the Virgin group’s second hotel. The first one opened in San Franciso and others followed in New York and other cities in America.

The Virgin Hotel Chicago is a complete package, offering everything you’ll ever need for a perfect getaway. With 5 on-site restaurants, a rooftop bar, nightclub, and spacious comfortable rooms, it’s no wonder that this is one of the more popular gay friendly hotels in Chicago.

At the hotel, lifestyle-focused rooms are split into two by sliding doors to create two separate areas for work and play. A dressing area featuring a closet and well-lit make-up desk adds a special touch to the room. Added to this is the luxury walk-in shower. The one of a kind custom designed hybrid bed with adjustable footboard is also an interesting feature of the room. All rooms have free Wifi and a minibar stocked at street prices. For a more customized package the hotel recommends joining its ‘The Know’ programme.
Check Rates & Book Now

For those looking to splurge on up-market gay hotels in Chicago, the Viceroy Chicago may just be what you’re after. Its prime location in the city’s exclusive Gold coast neighborhood, surrounded by historic mansions makes it a great choice. It’s a short walk to the Magnificent Mile and other nightlife destinations from here. So, if you’re someone who loves to hit the designer stores, you know where to base yourself.

The reimagined hotel built at the site of the former 1920s-era Cedar Hotel exudes class and charm. It features a sleek two-story restaurant and bar, a rooftop lounge and a seasonal pool on the 18th floor. Stylish guest rooms are tastefully furnished and equipped with various amenities. Apart from all this, the hotel also has a state of the art fitness center.
Check Rates & Book Now

You don’t have to be a big baseball fan to appreciate the design aesthetic of Wriggleville’s first luxury boutique hotel. The Wheelhouse Hotel whose lobby features a whimsical floating baseball bat installation prides itself on bringing unpretentious luxury to the spirited neighborhood. Its location just an 8 minute walk away from Boystown puts it at the top of the list of gay friendly hotels in Chicago. The Addison Red Line L stop is also within walking distance of the hotel, providing easy access to downtown Chicago.

There are six different types of rooms to choose from at the 21-room hotel. Playfully sophisticated rooms complemented by illuminating accents add a touch of intimacy and class. The bright spacious rooms are enhanced by floor to ceiling windows which allow ample natural light to stream in.
Check Rates & Book Now

If you’re looking for luxury at an affordable price, the Moxy Chicago is your best bet. This Category 4 Marriott property sits at the heart of Chicago’s River North neighborhood close to the city’s main tourist attractions and nightlife. Boystown is less than a 15-minute drive from here. Moxy is surrounded by some of the best watering holes in town with one right in the lobby. That’s also where you’ll find the front desk to pick up your keys.

Moxy hotels are renowned for their bold decor and the one in Chicago is no different. You’ll find many pictures of beautiful half-naked people adorning many walls here. Privacy shades feature hedonistic room scenes while the inner courtyard has a rather provocative art installation. Some rooms may be a little on the smaller side but the beds are comfortable and freshly made. Moxy focuses on travelers who are constantly on the go so their rooms are designed accordingly.
Check Rates & Book Now

The rather funky Hotel EMC2, part of the Marriott Autograph Collection stands tall in the Streeterville neighborhood, a block off Michigan Avenue. Its location so close to all the action makes it one of the favored gay friendly hotels in Chicago. Lake Michigan and Ohio Street Beach are just a ten-minute walk from here. However, it’s not just the location that makes this hotel so popular but its artistic touches which pervade every corner of the hotel, right from its colorful exterior.

Stunningly designed rooms stand out for their attention to detail. The transparent glass shower is a throwback to a 1920s wet lab. This scientific theme is further enhanced by swanky globe lights, and glass and rose copper-colored tubing. Colorful rugs, splashy art, and a comfortable bed complete the beautiful room. The hotel also has a happening lounge and a contemporary restaurant which are popular with guests and visitors.
Check Rates & Book Now

The grand 1894 building which houses the Kimpton Gray Hotel in the Loop’s financial corridor once housed a life insurance company. Originally designed by the ‘father of the skyscraper,’ William Le Baron Jenney, the hotel retains its old-world charm. Shiny gray marble dominates the interior, giving the hotel its name. There are also other interesting touches like the vintage elevators with neon signs.

The subdued palette used in the rooms evokes images of a well tailored suit. Powder blue drapes add a pop of brightness to the textured gray walls of the modern yet minimalist rooms.

Kimpton is one of the most inclusive hotel chains for the LGBT community so it comes as no surprise that Kimpton Gray Hotel is one of the more popular gay hotels in Chicago. The hotel’s beautiful design as well as its proximity to many of the city’s attractions and nightlife makes it a good place to base yourself.
Check Rates & Book Now

City Suites Hotel is an affordable gay lodging in Chicago right where all the action is, in lively Boystown. If you’re looking for no-frills accommodation that’s comfortable and clean, you’ll love this one. The hotel is a stone’s throw from the elevated train station so if you want to explore the area outside Boystown, it’s easy.

Most of the rooms at City Suites are fairly large and equipped with amenities for a comfortable stay. Some of the units are two-room suites with double amenities, which is great if you’re traveling with a group. Bathrooms have shower/tub combos with complimentary toiletries. Although the hotel does not have an on-site restaurant, guests can enjoy a complimentary breakfast at the lobby lounge and free cookies in the afternoon.  Guests also get free passes to use the facilities of #1 Gym which is three minutes away.
Check Rates & Book Now

A short ten-minute walk from Wrigley Field you’ll find the historic Best Western PLUS Hawthorne Terrace. You don’t have to be a baseball fan to love the location which is just a block away from Boystown. With a location this close to the gayborhood of the city, the hotel is at the top of the list of affordable gay lodging in Chicago.

All 83 guest rooms at the hotel have modern amenities such as complimentary high-speed internet, upgraded linen, and stylish bathrooms with granite countertops. The suites have separate sitting areas, full kitchens, and great views.  Guests can also enjoy a complimentary breakfast each morning. Added to this is a fitness center, jacuzzi, spa and sauna.
Check Rates & Book Now

Gay popular hotel chain, Ace, also has a gay lodging in Chicago in the West Loop neighborhood about 15 minutes drive from Boystown. The former industrial area is now a restaurant hotspot with a number of hip restaurants and bars. The Loop is about a five-minute ride by train from here while the Magnificent Mile is about ten minutes by cab.

The first Ace Hotel in the Midwest stays true to its boutique brand with an artsy decor that reflects the local area. Housed in what was once a cheese-making company, the seven-story industrial building made from glass and concrete has left its past far behind to become one of the more sought-after gay friendly hotels in Chicago.

The rooms are simplistic with a black and gray palette. Metallic bed frames make the beds look like cots although they don’t lack comfort. You can choose between rooms of different sizes and categories. City Mouse, the on-site restaurant on the first floor, serves up delectable treats, enticing a steady stream of locals and guests.
Check Rates & Book Now

Vibrant colors, ultra-modern furniture, and a funky vibe is what makes Aloft Chicago special. The hotel’s location combined with its unconventional and energetic atmosphere puts it high on the list of gay friendly hotels in Chicago. River North is a pretty safe neighborhood in central Chicago that’s brimming with dining and shopping choices. Many of the city’s attractions are within walking distance of the hotel.

Large floor to ceiling windows and bright white bedding in the guest rooms provide a welcome contrast to the muted colors of the walls. Sparsely furnished but stylish rooms are equipped with various amenities for guests’ comfort. A restaurant in the lobby and an adjacent bakery offers a wide range of options to whet your appetite. There’s also a bar in the lobby featuring live music and a billiards table.
Check Rates & Book Now

Get Some Culture in Chicago: