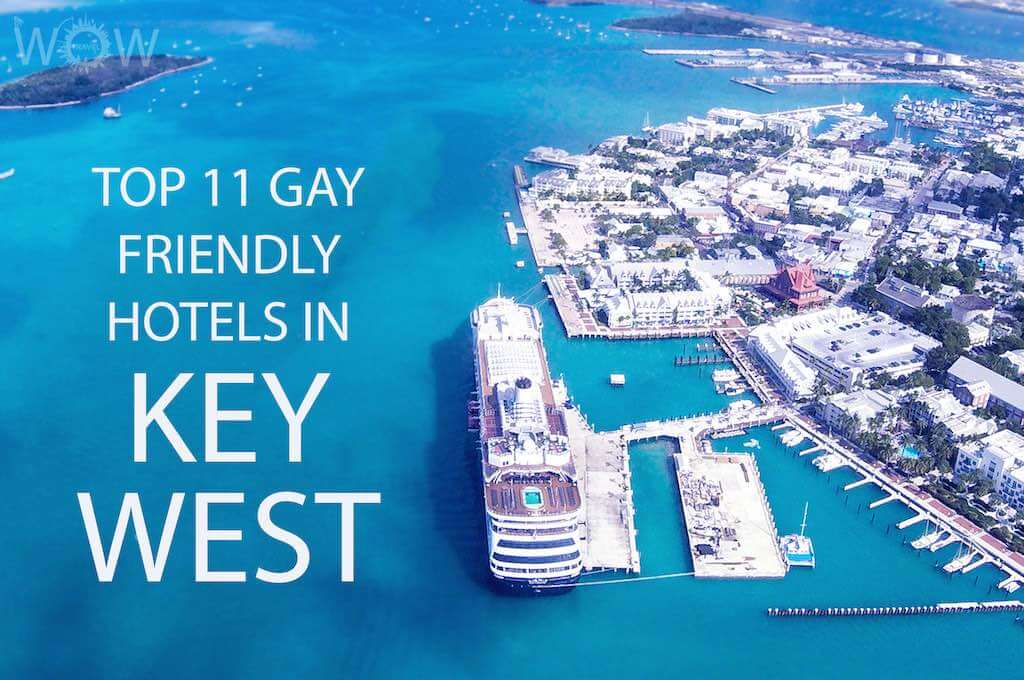 Queer inclusiveness is steeped deep into the fabric of Key West, the notorious gay island mecca in South Florida. As a 30% LGBTQ. population, Key West has always attracted gay travelers. The heart of the island’s gay scene is Duval Street, which houses the best gay hotels in Key West as well as its best gay bars. In fact, Duval Street is also where some of the best, swanky gay Key West resorts are also situated. So, gay travelers have so many options that they’ll find it hard to choose a place to stay.

Key West’s reputation as an LGBTQ refuge goes back to the ’80s when the city was one of the first cities in America to elect an openly gay mayor. Ultimately, the island saw many gay and lesbian travelers become permanent residents, and even today it remains a popular gay spring break getaway. Apart from Key West Pride, the island also hosts the hot-hot Tropical Heat party, the 10-day extravaganza Fantasy Fest, and the Key West Bear Weekend. Those looking for a laid-back holiday on the island can simply put up their feet and lounge on the island’s white-sand beaches like Higg’s Beach, Key West’s unofficial gay beach.

Island House is one of the best gay Key West resorts, as well as one of the world’s best gay resorts. Famous across South Florida’s LGBTQ community, Island House is one of the largest male-only, clothing-optional gay hotels in Key West and is chock-full of social amenities. Think sauna, steam room, a five-man shower, a Jacuzzi, a pool, a sundeck, a bar, and even a darkroom, should you be feeling particularly adventurous! In fact, this gay men’s paradise even hosts clothing-optional pool parties on Sundays and Wednesdays.

Rooms at Island House range from basic ones to lavish suites and apartments for group revelries and TV channels play gay videos and movies as well. With day passes available to non-guests, Island House is one of Key West’s top destinations for cruising and socializing. And, if you’re particularly seeking crowd that is in its late 30s and older, this gay men’s heaven Island House is for you. If you’re seeking the exciting gay nightlife, the best gay bars in Key West are a mere 15-minute walk.

Alexander’s Guesthouse is the only gay Key West resort catering to a true mix of men and women, making the atmosphere feel less cruisy. The clothing-optional gay Key West hotel/guesthouse is set up in a restored 19th-century, three-story Conch house typical of Key West. Rooms are spacious with private balconies, while the splashier ones even have their own private sundeck. Communal areas include the Jacuzzi, pool, and several sundecks, some clothing-optional, and are great for lounging and meeting new people.

The cocktail happy hour at their in-house Pink Monkey Bar is great for pre-boozing before heading out to Duval Street’s fabulous gay scene 10 minutes away. If you’re looking for something with a casual vibe, Bobby’s Monkey Bar should be your destination. The gay dive bar is one of the most popular gay Key West bars with a pool table, karaoke, and fantastic drinks deals.

If you’re gay and want to party till late in Key West while being budget-savvy, New Orleans House is perfect. The guesthouse is part of the Bourbon Street Complex where gay parties go on until 4 in the morning. It is also the only gay Key West resort downtown that’s only male and clothing-optional too! While the rooms aren’t the most luxurious and feature tons of noise from the Bourbon Street Pub downstairs, New Orleans is cheap and party-central for revelers. What’s more, you even have access to a clothing-optional private sundeck area, pool, and bar, and a 15-man Jacuzzi as part of the complex.

Since New Orleans is right in the middle of all of Duval Street’s action, we suggest that you end your night right downstairs from the hostel at the Bourbon Street Pub. The gay man’s paradise of a bar has a dancing area, a pool bar area, and sexy topless staff!

The adults-only, gay-friendly Cypress House is the perfect base for both sea adventures and gay adventures. The gay Key West hotel is just a few blocks from Duval Street as well as Key West waterfront, from where most of the island and sea adventure tours take off. For absolute water-fun babies, we’d recommend this 4-hour snorkeling and kayaking tour in some of the world’s clearest waters!

The guesthouse itself is set in a charming 19th-century Conch mansion with a majority, super-cute gay staff. While some rooms even have private balconies, the common areas are particularly fantastic – a communal kitchen, a landscaped sun lounging area, and a large outdoor lap pool.

Duval Street and its gay offerings are just a 10-minute walk away. Begin your evening of fun at the bar right next to the Rainbow Crosswalk, the longstanding icon of 801 Bourbon Bar.

One of the popular gay hotels in Key West since the ’90s is the only-male, clothing-optional Equator Resort. The gay Key West resort is more intimate than the larger resorts and has both privacy-central rooms near the gardens and party-worthy ones near the pool. The hotel has superb communal areas including a ground-floor pool with sunken Jacuzzi, a landscaped sun lounging space, a small bar and a larger upstairs sundeck which is clothing-optional.

Rooms are furnished contemporarily, with TVs featuring adult channels, and range from standard ones to suites with separate sitting areas. Everyday happy hours make the guesthouse the perfect place to socialize.

What’s more, Equator is just a stone’s throw from the gay bars in Key West on Duval Street. Gays into leather and looking for something kinky will love Saloon 1, an only-male, in-your-face leather bar, and the only one in Key West!

The Mermaid & The Alligator

If you’re looking for an elegant gay stay in town, the adults-only Mermaid & The Alligator is one of the classiest gay hotels in Key West. The sophisticated, whimsically-named LGBTQ-friendly property is housed in a 19th-century Queen Anne mansion with picture-perfect landscaped gardens. Rooms range from classic ones to a treetop suite, with modern aspects of living. Communal amenities include complimentary breakfast, a common lounge with games and a TV, and even a heated pool.

Staying at the Mermaid & the Alligator is also great for soaking in some history and culture of Key West. We’d recommend this wonderful 3-hour food tour which begins just five minutes away from the hotel. You get to not only taste the best foods that Key West is known for but also delve into the culture and lifestyle of the people in town.

(NYAH) Not Your Average Hotel

A slew of extravagant amenities and affordable, budget-friendly rooms – that’s what the adults-only, gay-friendly Nyah offers. Nyah features a unique “Build your own room concept” for up to six guests in one room, and even allows for single travelers to book the rooms too. The beautifully modern not-a-hotel features a smattering of pampering amenities including two jacuzzis, three pools, and sun lounging decks. What’s more, the lobby bar has happy hours and the not-a-hotel even serves a delectable continental spread for breakfast at the poolside.

Nyah is located right in the heart of town, halfway between the waterfront and the gay bars of Key West on Duval Street. Evening revelries on Duval Street aren’t more than 10 minutes away. Staying at Nyah is also perfect for those who want to have some fun exploring Key West during the day. Why not have fun with this 2.5-hour scavenger hunt in Key West? You’ll not only have fun solving the clues but also get to explore the hidden gems and beauty of Key West.

If you wish to splurge on out-and-out Key West luxury, the waterfront Hyatt Centric Resort and Spa is one of the best gay Key West resorts. Housed in a beautiful Caribbean colonial-style structure, the boutique Hyatt Key West is neither your cookie-cutter of a chain property nor is it overwhelming. Spacious rooms, all with balconies with lovely Gulf of Mexico views, make your stay as comfortable as it gets. However, it’s the splendid onsite spa Jala which is the property’s highlight. Indulge in a soothing couple’s massage with your partner or lounge in the large heated pool.

Hyatt’s proximity to Key West Harbor and its many outfitters makes it great for indulging in fishing, snorkeling, and diving trips. However, if its romance you’re looking for, we’d highly recommend this 2-hour sunset party cruise which makes for a perfect water getaway with your partner. Swing to Key West tunes, sip on margaritas and snap fantastic pictures of the sunset as you sail out to the Gulf of Mexico and make memories for a lifetime.

The Southernmost Beach Resort lies right next to the historic landmark of the southernmost point in the continental US. One of the most luxurious gay hotels in Key West, the resort is also the United States’ southernmost gay hotel! 250+ spacious and modern rooms set across several historic structures make the resort’s location an excellent one. It’s near Duval Street’s gay scene and overlooks the stunning turquoise-azure waters of the North Atlantic Ocean.

The hotel has four tropical bars, three pools, oceanside hammocks, and sun loungers going right onto the water, making it perfect for meet-cutes in the most romantic of settings. Don’t miss booking couples’ massages in the massage cabanas that overlook the Gulf of Mexico.

What’s more, the gay scene on Duval Street is right down the road, including the fantastic Aqua Nightclub, Key West’s best nightclub and perfect for those who want to dance and party the night away.

The adult-friendly La Te Da hotel is more of a large gay-friendly venue with luxurious rooms, a Cabaret theatre, and a restaurant. It sits just down from popular gay bars in Key West, making it particularly popular with the gay-couple travelers.

La Te Da has many communal areas including a sundeck area and a large pool where the legendary gay tea dance party takes place. Every Sunday afternoon, this longstanding party is extremely popular with gay locals and travelers. The cabaret theatre at the hotel has some of the best drag shows in Key West, and the bar-restaurant is a very popular gay hangout. All these could make the area a bit crowded, but the mixed demographic makes it feel less cruisy.

Rooms range from compact to high-end ones. Even the most economical rooms feature private baths, making this a fantastic deal of a gay Key West resort.

Stay in eclectic Key West-style at the fabulous Marker Waterfront Resort right on the historic harborfront of Key West. The noise from the Marina could be a bit much, especially during the evenings. However, the location is fantastic for exploring the best sights of Key West and Duval Street’s gay scene 15 minutes away. Marker is the perfect place to engage in Key West’s gay scene while getting your much-needed tranquility and sleep.

All rooms at the Marker feature private balconies and are beautifully furnished to inspire romance. The hotel has two superb saltwater pools and an adult Serenity pool and sun loungers with local-friendly policy. So, you never know where you might end up meeting someone new!

Get Some Culture in Key West: