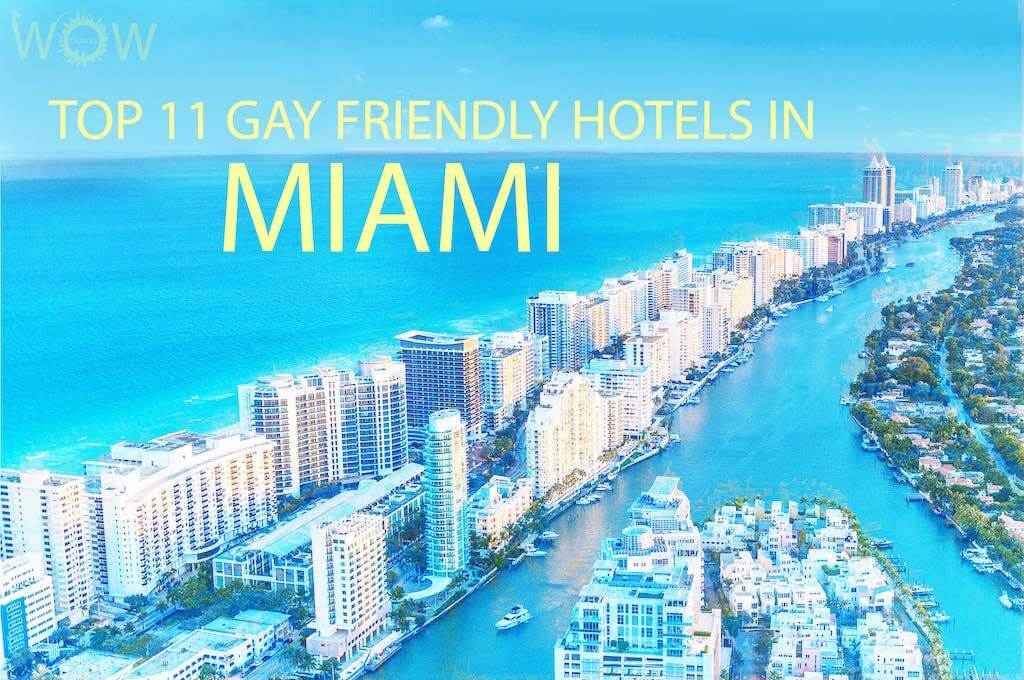 Miami is considered to be a gay mecca with its gay parties and fantastic nightlife, attracting over 1 million LGBT visitors a year. Not surprisingly, there are numerous gay hotels in Miami to choose from. Whether it’s the gay hotels in Miami South Beach or Downtown, you’re spoilt for choice by the wide options available.

While there is only one exclusively clothing-optional gay hotel in the city, there are numerous gay-friendly hotels to choose from. From quaint art-deco boutique hotels to luxurious upscale properties, there is no dearth of gay hotels in Miami.

Although the stunning resorts, the beach, and the nightlife are the main attractions here, there is much more to the city. If you love art and beautiful things, you’ll definitely enjoy the Miami Art Tour through the art districts of Miami. Or if celebrity-sighting is your high, you might just get lucky on the Millionaire’s Row Cruise.

Similar to its counterpart in Barcelona, the W South Beach has a prime beachfront setting. With its upscale and hip vibe, the W is one of the more popular luxury gay hotels in Miami South Beach. Ocean Drive with its Art-Deco buildings is at a walking distance from the W, as is the beach. There are also plenty of gay bars and clubs in the vicinity.

The W South Beach veers slightly away from the youthful trendiness of its other properties with a more sophisticated design. Although the interior of the hotel has a slightly more subdued vibe, the WET pool is where the party’s at. Loud music from DJs can be heard throughout the day in this area. The large pool is surrounded by landscaping and is a great place to unwind. No wonder it’s one of the best hotel pools in Miami.

Rooms at the W are spacious with furnished terraces and upmarket decor. Patterned rugs, surf-themed artwork and silver accents add to the overall design of the rooms. The hotel also features an upscale dining, garden lounge, a spa, and a stylish nightclub.
Check Rates & Book Now

Just like its contemporaries in New York and Los Angeles, there is nothing standard about the hip Standard Miami. This hotel is one of the more popular gay hotels in Miami because of its location just steps away from the beach. Its iconic spa with hydrotherapy baths, a Turkish hammam, and a mudroom is also extremely popular. Although the hotel enjoys a prime location, popular destinations like downtown Miami and the Wynwood Arts District are about a 15-minute drive away.

Guests can choose from a wide range of room types from small standard rooms to larger Bay View Suites. The Garden Medium Rooms on the ground floor have outdoor terrace areas. While the hotel’s most remarkable feature is its spa, the bayside pool, and the hotel’s gardens with hammocks and seating areas are also pretty good.
Check Rates & Book Now

The sister hotel of the Standard features high on gay hotels in Miami South Beach because of its gay-popular pool scene and architecture. Built in the 1940s by Murray Dixon, the man largely responsible for designing Miami’s Art Deco district, The Raleigh is still a standout architectural icon. Its location also accounts for its popularity as the hotel sits on the trendy Collins Avenue with private access to the public beach and easy access to the gay nightlife.

The retro rooms stand in sharp contrast to the updated Art Deco lobby and beautiful swimming pool. Although the rooms are clean and spacious they feel a bit dated. However, they’re well equipped with modern amenities. The standout feature of the hotel is undoubtedly its stunning freeform saltwater pool with a waterfall.
Check Rates & Book Now

This South Beach icon once housed a recording studio, making it a popular venue for celebrity sightings. However, renovations to the upscale Art Deco Marlin Hotel replaced the studio with more rooms. It also converted the design to something more contemporary, although the hotel still maintains its intricate 1939 facade. Located on a quieter strip of Collins Avenue, the Marlin Hotel is just a block away from Ocean Drive and two blocks from the beach.

The cozy, stylish rooms equipped with modern amenities have wood flooring and contemporary furnishings. Half the rooms at the hotel face the street, while the other half does not have any kind of view to boast of. An onsite restaurant and fitness center are other facilities that you can look forward to at the Marlin.
Check Rates & Book Now

One of the most popular gay hotels in Miami South Beach, the Kimpton Surfcomber is renowned for hosting some of the biggest gay events in the area. Its location right on the beach close to many gay bars and restaurants is also a big draw.

The hotel underwent a major facelift in 2011 to upgrade to a more trendy and stylish property. Rooms at the hotel are not very big but have an interesting fusion of beach and bohemian decor. The bigger suites have impressive balconies with lounge chairs. However, only 12 rooms have an ocean view. Other amenities at the hotel include a poolside bar, two reasonably priced restaurants, a heated pool, and a fitness center.
Check Rates & Book Now

Just across the street from the beach, the Hotel Victor on Ocean Drive is a modern and upscale property. One of the older Art Deco properties in the area, the hotel features neutral tones, natural fabrics, and unfinished wood throughout the property. The gay-friendly hotel is right in the midst of Miami’s nightlife with many open-air bars, restaurants, and clubs in the vicinity.

Sophisticated guest rooms with a beachy vibe are decorated with weathered wooden accents and neutral colors. King Suites feature infinity-edge hot tubs and balconies, while Penthouse Suites have hot tubs and private rooftop terraces. The hotel also has a fitness center, a pool, bar and lounge, and a spa.
Check Rates & Book Now

Hotel Gaythering in the heart of Miami’s Beach gayborhood is one of the most popular gay hotels in Miami. No surprises there since it’s the only exclusively gay hotel in the city, although all adults are welcome here. The hotel is in close proximity to many gay clubs such as Score, Palace, and Twist and is about a 10-minute drive to South Beach. A complimentary shuttle is available to Haulover Nude Beach and other attractions.

Spacious rooms highlighted with red accents are comfortable and well equipped with amenities. The hotel also has a library for communal events, games room, and a sauna and steam room.
Check Rates & Book Now

For those who enjoy a bit of luxury, the EAST in the Financial District is a great option. Situated atop the Brickell City Centre, this trendy hotel may not be right in the midst of all the action but it is close enough. The Design District is about a 15-minute drive from here, while South Beach is 20 minutes away. Miami’s free public transit option is near the hotel so getting to other parts of the city is fairly simple.

As expected, the rooms here are stylish and modern with minimalist decor. Floor-to-ceiling windows allow ample natural light to flood the room. The ensuite bathrooms are sleek and stylish with walk-in rainfall showers. Higher category rooms feature separate soaking tubs, making it one of the 11 Most Romantic Hotels In Miami.

The outdoor pool with its greenery and chic loungers is the highlight of the hotel. You’ll also find a hot tub, spa pool and cold plunge pool nearby. Besides this, the hotel also has several dining options. However, the food and drinks are quite pricey.
Check Rates & Book Now

The adults-only Blanc Kara ranks high on the list of affordable gay hotels in Miami South Beach. Its location in the chic South of Fifth area, just a short walk from the beach and restaurants make it a popular base. Most of the attractions in the city are about a 10-15-minute drive from here while South Beach is only a five-minute drive.

While the 25-room boutique hotel does not have extra features like a pool or restaurant, its attention to detail makes it stand out. Black and white are the predominant colors in the rooms complimented by pops of brightness from bedside tables and cushions. A small kitchen equipped with stainless steel appliances and marble tables features in each studio. Complimentary toiletries, tote bags, and modern amenities add to the comfort of staying here.
Check Rates & Book Now

If you’re a regular traveler you’ll be familiar with the Axel brand of hotels. This popular gay hotel chain with properties in Gran Canaria, Berlin, and other gay cities, recently opened its ‘hetero friendly’ hotel in Miami. With the kind of vibe that the Axel hotels are known for and its great location a block away from the beach, there’s no doubt that the AxelBeach will soon be one of the more popular gay hotels in Miami.

The bohemian spirit of the 40s is reflected in the Art Deco interior of the hotel. All 160 rooms at the hotel are elegantly designed and equipped with modern amenities. Rooms and suites range in size and price with most rooms overlooking the city. A few rooms have views of the garden and the pool. Facilities at the hotel include a gym, spa, two jacuzzis, and a poolside bar and restaurant.
Check Rates & Book Now

Fitting into the upper-middle range of gay hotels in Miami South Beach, the stylish Albion is a good value for money. It has a great location right in the heart of the tourist area. It’s just a five-minute walk to the vibrant Lincoln Road Mall and just down the street from the beach.

The art deco and maritime-inspired interiors add a touch of class to the hotel. Rooms have a navy and white nautical-inspired color scheme with art deco influences. Flat-screen TVs, free Wi-fi and iHome docks are some of the amenities that you can expect in the rooms. Above the courtyard, on an elevated deck, you’ll find a long, delightful pool with plenty of loungers and umbrellas. The hotel also has a restaurant and a small fitness center.
Check Rates & Book Now

Get Some Culture in Miami: