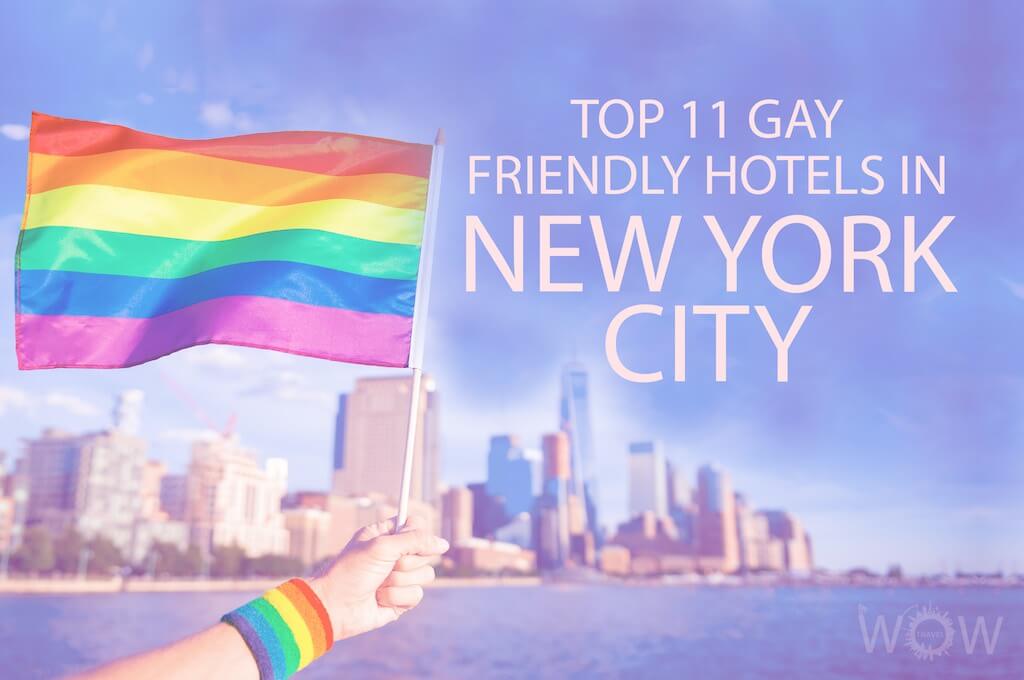 New York City is a great travel destination in itself, but for the LGBT community, this city is at the top of the best gay cities in the world. Much like San Francisco, NYC is one of the most liberal gay cities, not much of a surprise though as the queer community went through a lot to change the city’s perception. It has one of the world’s biggest queer scenes and a rich history of LGBT activism. You’ll find plenty of gay hotels in New York

Queer culture is everywhere you look in this great city, from gay bars and clubs to stylish lounges and trendy restaurants. Predictably, finding a gay friendly hotel in New York is as easy as finding a heterosexual hotel. Although all five boroughs of New York are extremely gay friendly, Chelsea, Greenwich Village, and Hell’s Kitchen are the main bastions of gay life.

There’s a lot that will keep a gay traveler occupied on a visit to this fantastic city.  From walking around in a wonderful daze when you land to soaking up the sights and sounds that make this city what it is, New York will seep into your soul. Beautiful parks, iconic landmarks, fantastic shopping, avant-garde museums and of course ‘guy watching,’ will take up much of your time here. If you’re interested in learning more about the city, the New York “Must See” Tour is a good way to discover all that this great city has to offer. You could even try something more novel by taking to the night sky on the helicopter tour by night to experience the city lights.

The W Times Square is a fantastic place if you are a fan of eclectic style and want to be right in the midst of the action. In keeping with the high standards of the W chain, this hotel too provides extraordinary service with close attention to detail. The rooms are well- equipped with all the necessary amenities you would look out for and also has a well-stocked minibar. The hotel has three onsite restaurants. So, you don’t have to venture out very far if you want a quick meal. The Living Room Bar is also a great place to have a few cocktails before you head out for further exploration of the city.

Being so close to Times Square and New York’s fascinating gay bars, this is an ideal place to base yourself if you’re looking for comfort and luxury. Broadway theaters are within a short walking distance from the hotel. You could catch a show of the popular Moulin Rouge Musical or any other famed musical since you’re so close to the theaters.

If you’re looking for a good affordable gay hotel in New York in the heart of the Theater District, the iconic St James Hotel is a good option. This is one of the oldest gay hotels in New York City. The hotel has been around since 1972 and is housed in a 12 story pre-war tower. Despite being an old hotel, it’s clean and comfortable with spacious airconditioned rooms equipped with a flat-screen TV providing excellent city views. Staying at this property puts you close to Greenwich Village where a number of gay bars are located. Times Square is just a block away.

For something interesting and different to do, we recommend the 3-hour Prohibition bar tour to discover the secret New York bars of the 1920s when alcohol was banned.

The Bernic is a luxurious Midtown East property located in Manhattan. This gay-friendly and modern hotel is a few minutes away from the Rockerfeller Centre and St. Patrick’s Cathedral. The UN Headquarters are also nearby. Close to the UN, you’ll find the East Side Club one of the few gay saunas in New York. However, if you’ve visited the popular gay saunas in other countries this one may come as a slight disappointment.

If you are on a romantic trip, this minimalist and well-equipped gay hotel in New York will be the ideal place to lock yourselves away for the weekend. A great alternative to 11 Most Romantic Hotels in NYC. Guestrooms feature balconies, floor to ceiling windows and are well equipped with amenities to keep you ‘home-bound’ if you choose to do so. The Bernic has an Italian American restaurant that serves delicious food on the top floor and a sky lounge with amazing views. Hence, it is not hard to plan the perfect queer itinerary when staying in this fabulous hotel.

Holiday Inn 6th Avenue is perfectly situated between the picturesque Flatiron District and Chelsea. It has an outstanding location in the core of an NYC vibrant neighborhood and sits close to the exciting nightlife of this city that never sleeps. If you are more of a vampire and visiting New York to meet new gay people, the hotel is not far from the most famous gay clubs like Therapy.

Contemporary and stylish rooms are the hallmark of this hotel which strives for comfort and convenience. Bathrooms are outfitted with shower curtains and boast new amenities from Bath and Body Works. The friendly service and stellar amenities of this gay hotel in New York will definitely make an impression.

Kimpton Eventi is a recently renovated gay hotel in Chelsea, New York occupying a whole block. The revamped ground floor features a chic lobby that brings a ‘living room’ feel to this, one of the gay hotels in New York City. This gay friendly boutique hotel is understated in glamor with en suite marble bathrooms and rooms with huge windows overlooking the city. The fifth-floor Veranda provides sweeping views of Sixth Avenue and the Empire State Building.  Guests can also enjoy an in-room spa or work out at the fitness center. The on-site restaurant, The Vine is a good place to head to for breakfast or dinner.

The hotel is a few meters away from the Empire State Building, Madison Square Garden and Penn Station. Gay bars like Metropolitan and Barracuda Lounge are located in the vicinity of the hotel.

The Stewart Hotel is just perfect for gay couples who love the vibrancy of the city and the thrill of Broadway. Guests can choose to spend memorable moments under the New York-inspired lobby with high ceilings, a stunning ballroom, designer event space or the very spacious suites. The rooms here are spacious and outfitted with modern amenities. You can also indulge in in-room spa services or work off some calories at the gym.

The Stewart hotel’s location places guests at the crossroads of NYC’s most iconic neighborhood districts. The property is near Pennsylvania Station and Madison Square Garden. The iconic Empire State building is a short walk away as is Times Square. Gay bars and restaurants in other gay hotels in New York are nearby. Plus, the pulsating nightlife is also within easy reach of the hotel.

CitizenM is a gay-friendly hotel in New York that avoids hotel clichés offering a modern stay in the city center. Located at the heart of Manhattan, this artsy hotel is a great place to base yourself. It’s just a minute away from Times Square and five minutes to Central Park. The hotel’s rooms are cozy and stylish featuring a centralized digital system to control the lighting and electronics. Although the rooms may seem compact, the public areas such as the library, the guests-only rooftop lounge, and lobby bar are all very spacious and inviting.

The hotel has three outdoor terraces with a state of the art fitness center, yoga facilities, and an exclusive rooftop bar. The lobby styled in the fashion of a living room showcases a contemporary art collection.

The Standard High Line hotel is located in the Meatpacking District, which is renowned for its gay nightlife. It is just a short walk from several gay bars such as NO BAR and The Stonewall Inn. Rooms in this sleek high-rise have huge floor to ceiling windows that look out onto some fantastic sights of Manhattan or the Hudson River. The hotel is so well equipped that you probably won’t feel like venturing out.

Some of the standout features of the hotel include stylish rooms, trendy bars, a souvenir shop as well as several onsite bars and restaurants. The bustling German beer garden at the ground level and the rooftop nightclub, Le Bain, are popular hangouts in the city. It’s also well-known for the Pride parties that it proudly hosts every year. The Top of the hotel has an outdoor plaza with a winter ice rink and rotating art installations.

Nestled in Brooklyn’s vibrant neighborhood of Williamsburg, The William Vale hotel is a sumptuous boutique hotel that has everything to want to make you overstay your visit. It’s also a great place for those who appreciate art. Artwork by Marela Zacarias adorns the hotel lobby while the rest of the hotel is also decorated with work by other artists. The standout feature of this hotel is undoubtedly the rooftop swimming pool, the longest outdoor pool in NYC. Adjacent to the pool is an immaculately landscaped open-air venue, Vale Terrace for events and celebrations.

This multi-purpose property combines food and drinks, public spaces and retail in an exquisite New York ambiance. It’s not exclusively one of the gay hotels in New York City. But, this gay-friendly hotel in New York has spacious rooms with skyline views, private balconies, an elevated public park, and fantastic event spaces. You can feast on a range of delicacies at the 3 onsite restaurants, Westlight, Leuca and Mister Dips.

The St Regis hotel is situated in the middle of Midtown and is part of a long list of classic luxury gay hotels in New York City.In fact, it’s one of the best gay hotels in New York City. John Jacob Astor IV was the founder of the St Regis a century ago. He decided to create the greatest historic hotel in the world and arguably succeeded with one of the highest buildings in NYC. The building benefits from a timeless touch and has reached the highest limits of sophistication.

If you wish to soak in NYC in style, this accommodation is difficult to beat. A 24-hour butler service is at hand for guests as is the limousine rental service. You can be driven in style to some of the local gay hotspots such as Latitude Bar & Grill, Therapy and Flaming Saddles Saloon. Since the hotel is so close to Central Park we recommend a romantic carriage ride to charm your better half.

The New York Edition lies just 22 meters from Madison Square Park in the iconic Metropolitan Life Clock Tower. This prime location puts you in close proximity to the main gay nightlife of the city and other attractions such as Eataly and Dover Street Market which is less than a kilometer away. Quite obviously, the hotel offers sweeping views of the city from oversized windows in the rooms.

Guests can dine at the hotel’s on-site Michelin-star restaurant, Jason Atherton, or enjoy a range of bespoke cocktails at the Lobby Bar. The rooms at the property feature a 48″ flat-screen TV, a private bathroom with custom bath amenities.

Get Some Culture in New York City:

America banned gay saunas and bathhouses in the 1980s. There’s plenty of gay hotels in New York City, but, you won’t really find a ‘true gay sauna’ in New York. Although there are a few clandestine sauna clubs in operation, we don’t rate them highly. The gay sauna culture is quite absent here. However, for those willing to go on a journey of discovery, we’ve listed two of the more renowned gay sauna clubs.