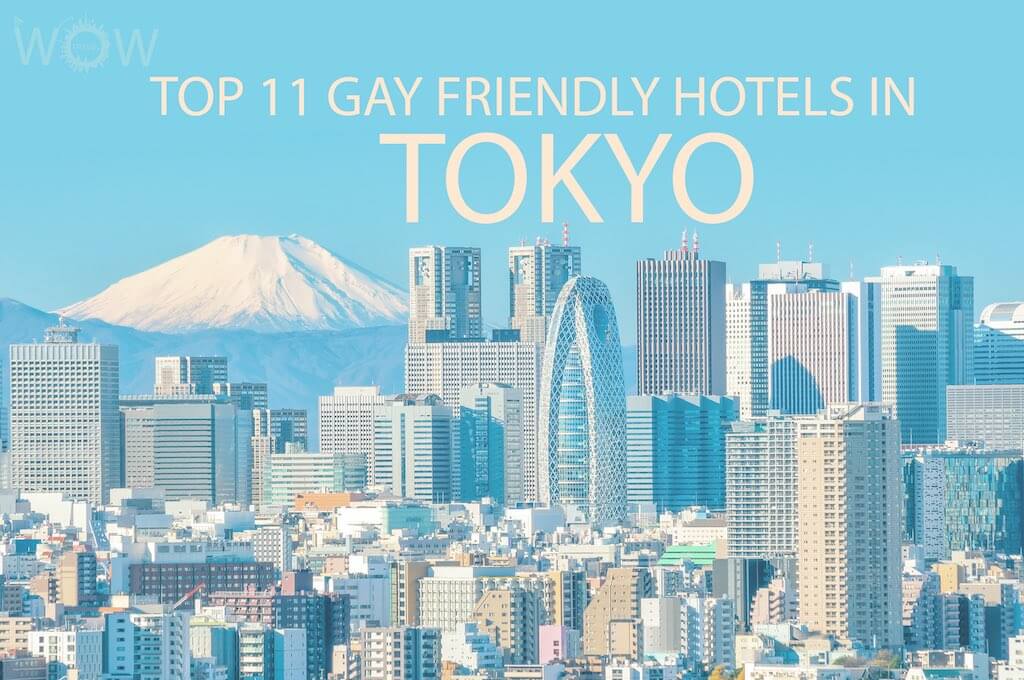 The capital of Japan is home to one of Asia’s biggest LGBT communities. So it’s hardly any surprise that there are plenty of gay hotels in Tokyo. Many are within easy reach of Shinjuku Ni-Chome, arguably the most popular Tokyo gay district. Lively enough by day, it’s more exuberant at night when the clubs and gay bars in Tokyo come alive. Other LGBT hotspots in the city—where you can also find Tokyo gay saunas and places for cruising—include Ueno, Asakusa, and Shinbashi. You can learn more about these neighborhoods through the insightful LGBT Tokyo Then and Now evening walking tour.

Japan as a whole might be a tad more conservative towards gay rights compared to some other Asian countries like Taiwan. However, the liveliness of the local gay scene makes it a popular destination for LGBT travelers from all over the world. The annual Tokyo Rainbow Pride is a fun-filled colorful event while the prevalent josou (cross-dressing) culture showcases the increasing public acceptance of diversity. Moreover, Tokyo consistently ranks as one of the world’s safest places—another factor in its global popularity among gay and straight travelers alike.

There’s also a wide selection of gay-friendly hotels in other parts of the metropolis. But since the city boasts an outstanding public transportation system, this means that the gay Tokyo district and numerous other attractions are never too far away. And if you’re thinking of inter-city return trips from Tokyo to elsewhere in Japan, you’ll find the Japan Rail Pass a handy thing to have. With it, you can enjoy unlimited rides on most JR trains (including the bullet trains) and bus services. Accommodation-wise, these gay-friendly Tokyo hotels will help ensure a memorable stay, whether your gay-cation involves exploring just the city or sojourns to nearby areas.

If you’re looking to splurge on gay-friendly 5-star accommodation, you can’t go wrong with The Capitol Hotel Tokyu. A large indoor pool, relaxing massages at the beautiful spa, and world-class restaurants dishing out world-class Japanese and international cuisine are some of its biggest draws. Famed Japanese architect Kengo Kuma designed this posh hotel whose rooms feature paper screens, mini-bars, and private bathrooms with bathtubs and free toiletries.

This LGBT-friendly luxury hotel sits in Chiyoda in central Tokyo. Several must-see landmarks are close by including the Japan Imperial Palace, the Okamura Chair Museum, and the Hie Shrine. Also, the Tameiki Sanno station is steps away, so getting to the Tokyo gay district of Shinjuku is an easy train ride of roughly 15 minutes.

Fancy going a few laps in a large indoor pool? How about playing tennis on a rooftop court? At the Hilton Tokyo Hotel, you can do these and more. The Hilton brand is a Platinum Global Partner of The International LGBTQ+ Travel Association (IGLTA). So it’s easy to see why this 5-star establishment is among the top gay hotels in Tokyo. The spacious and modern rooms and suites have everything you’d expect in a luxury hotel: satellite TV, iPod docks, Hilton Serenity beds, the works! Many also offer astounding views of the skyline.

The hotel’s location in Shinjuku means that many of the hottest gay bars in Tokyo are practically next door. A short walk will also bring you to the live-music venue Shinjuku Reny and the towering Shinjuku Sumitomo Building. The latter, once Tokyo’s tallest building, has an observation deck from where you can see Mount Fuji.

When it comes to pampering guests, the Keio Plaza Hotel Tokyo pulls out all the stops. This 5-star property in Shinjuku’s Skyscraper District 5 offers a beautiful outdoor pool on the 7th floor, a fully-equipped fitness center, and spas where you can experience luxurious massages and facial/body treatments. Dining is a gustatory delight at its many restaurants, and there are several bars and lounges that are perfect for a romantic cocktail. The comfy rooms and suites feature skyline views, a complimentary smartphone service, satellite TV, and spacious bathrooms with tubs. A free shuttle bus service to Tokyo Disneyland and Tokyo DisneySea is also available.

The attractions of gay Tokyo are close by. For example, I-Land-Tokyo, one of the popular Tokyo gay saunas, is a 14-minute walk away. And if you feel the urge for some retail therapy, you can stroll 10 minutes east to Mosaic Street. This bustling shopping district boasts wonderful stores selling everything from Japanese tchotchkes to hip clothing.

Bright and modern studio apartments are what you’ll find at the stylish Citadines Shinjuku Tokyo. Each unit at this condo-hotel has air-conditioning, a smart kitchenette, a private bathroom with free toiletries, and a flat-screen TV. Wi-Fi and wired Internet are free, and there’s a great continental breakfast available to greet you in the morning. And if you’d like to sneak in a workout during your vacation, you can use this LGBT-friendly hotel’s fitness center.

Several notable landmarks are within walking distance. You can unleash your inner child at the nearby Tokyo Toy Museum, enjoy the beautiful trees and flowers of the Shinjuku Gyoen National Garden, or admire the 16th-century Tochoji Temple. And just a short stroll away is Lumiere, a long-running Tokyo gay shop selling books, videos, and various adult products.

Top-notch accommodation and facilities at reasonable prices make the 3-star Onsen Ryokan Yuen Shinjuku one of the most appealing Tokyo gay hotels. The rooms here are designed with elegant minimalism in mind and include air-conditioning and a flat-screen TV. Some also offer nice views of the city. The hotel’s restaurant serves sumptuous Japanese cuisine. After a day of sightseeing, you can relax in the onsen (hot spring bath) while watching the sun go down. Free Wi-Fi, a 24-hour front desk, and coin-operated laundry machines are some of the other perks offered here.

A couple of Tokyo gay cruising spots are within walking distance. Body Breath is exclusively for muscular jocks between the ages of 18 and 39 and has different themes daily. Meanwhile, the adjacent Bears Camp welcomes bears with buffed physiques who are at least 30 years old. Popular neighborhood attractions such as the Saikoan Shrine, Hanazono Callery, and Shinjuku Eastside Square are all less than 1 km or about a half-mile away by foot.

This clean and modern 3-star hotel in the heart of Shinjuku is popular among travelers from near and far. The Shinjuku Sanchome Subway Station and the JR Shinjuku Station are within walking distance of Tokyu Stay Shinjuku, so many of the city’s top attractions are easily accessible. The Imperial Palace in Chiyoda, for instance, is less than half an hour away by train. The same goes for the world-famous Shibuya Crossing. Attractions that you can walk to from this LGBT-friendly hotel include the trendy Isetan department store, the Matchbaco Gallery, and the tiny Raiden Inari Shrine.

White walls and linens make each room seem extra bright and cheery. Standard features include light-wood furnishings, mini-fridge, an air purifier/humidifier, and a flat-screen TV. Some rooms have a microwave oven, washing machine, and tumble dryer. Luggage storage is free and there’s a 24-hour front desk to assist you anytime.

Proximity to some of the liveliest gay bars in Tokyo, clean accommodation, and excellent customer service all translate to an outstanding stay at the gay-friendly APA Hotel Shinjuku Gyoemmae. Entertainment is all around, from the impressive Robot Restaurant 90-Minute Robot Show to rakugo (comic storytelling) and yose (vaudeville) shows at the Shinjuku Suehirotei Theatre. Tokyo gay saunas such as CROSS are also close by.

The hotel’s simple rooms are equipped with the necessities for a pleasant and comfortable stay. You can watch videos on demand on a flat-screen TV, stow drinks in the mini-fridge, and sleep like a baby on the fantastic mattress. And at the Takumi restaurant, you can enjoy a barbecue and other grilled delights. Laundry facilities, vending machines, and a public onsen are some of this 3-star hotel’s other amenities.

Wired Hotel is located in Asakusa, another Tokyo gay district that emerged as an entertainment hub during the Edo Period. Today, you’ll find Tokyo gay saunas such as 24 Kaikan here. Asakusa is also home to a number of gay bars in Tokyo including Navigate, where bears and chubbies gather for karaoke among other things. Within easy walking distance is the Asakusa Shrine, one of the city’s most famous Shinto shrines. Hanayashiki Amusement Park, the oldest of its kind in Japan, is also mere steps away.

Travelers on a shoestring will find plenty to like at this gay-friendly hotel. There are 30 rooms distributed over 10 stories at the property. Some are dormitory-type rooms with screened-off bunk beds and shared bathrooms. These are air-conditioned and come with things like a refrigerator, microwave oven, and toaster. Private rooms and suites with their own private bathrooms are also available—some feature a balcony.

Opened in June 2016, the Hotel Allamanda Aoyama Tokyo is one of the city’s newer LGBT-friendly luxury hotels. There are smoking and non-smoking rooms—all are air-conditioned and equipped with a flat-screen TV and a bidet in the bathroom. The large indoor pool and state-of-the-art gym are popular with fitness buffs while those looking to rejuvenate the mind, body, and soul will feel right at home in the elegant spa. Feast on Japanese and international cuisine at the on-site restaurants and experience the warm hospitality of the English-speaking staff.

This 5-star hotel is set in Tokyo’s Minato Ward, where you can find many of the city’s great landmarks. One example is the National Art Center, which houses artwork by masters such as Monet, van Gogh, and Renoir. Also in Minato is the iconic Tokyo Tower and its special observatory that’s 223 meters (732 feet) above the ground. The Gaiemmae Station is mere steps from the hotel, so the gay nightlife of Shinjuku is never more than just a short subway ride away.

Modern elegance and a surfeit of services are par for the course at the Oakwood Premier Tokyo luxury condo-hotel. Occupying the sixth through 19th floors of a 19-story building in the Chiyoda ward, it’s an ideal place for leisure and business travelers. Each of the 123 large apartments in this 5-star property comes with a full kitchen, cable and satellite TV, and laundry facilities. Shopping and dining options can be found in the building as well.

This LGBT-friendly establishment is in the Chiyoda ward of Tokyo. It features an underground connection to Tokyo Station, making it easy and convenient for guests to travel around the city. Tokyo Ramen Street is a 5-minute walk away while the Bridgestone Museum of Art and the Masataka Contemporary Gallery are likewise reachable by foot. A known gay cruising spot called Wanker’s Union, popular among businessmen in their 20s through 40s, is also close by.

Well-appointed rooms and suites with eyecatching designs and decor are some of the hallmarks of the Shinjuku Granbell Hotel. You can get sleep easy on a Simmons bed, catch some entertainment on a flat-screen TV, and enjoy music via the iPod dock speaker. Delicious French and Italian dishes are on offer at the restaurant while the rooftop bar is a wonderful place for a scenic nightcap. And when you wake in the morning, you’ll find terrific breakfast options waiting for you.

This 5-star hotel is in Shinjuku’s Kabukicho area, where Tokyo gay life runs rampant. Small wonder then that Shinjuku Granbell ranks high among the most popular gay hotels in Tokyo. There’s no shortage of things to do in this neighborhood, day or night. You can don warrior armor at the Samurai Museum, play a game or two at a pachinko parlor, or find a pocket of tranquility at the Hanazono Shrine. For foodies, we recommend the Shinjuku Golden Gai Food Tour. Explore Memory Lane’s rustic bars, sample regional cuisine in Kabukicho, and submerge yourself in Golden Gai’s inimitable nightlife.

Get Some Culture in Tokyo: