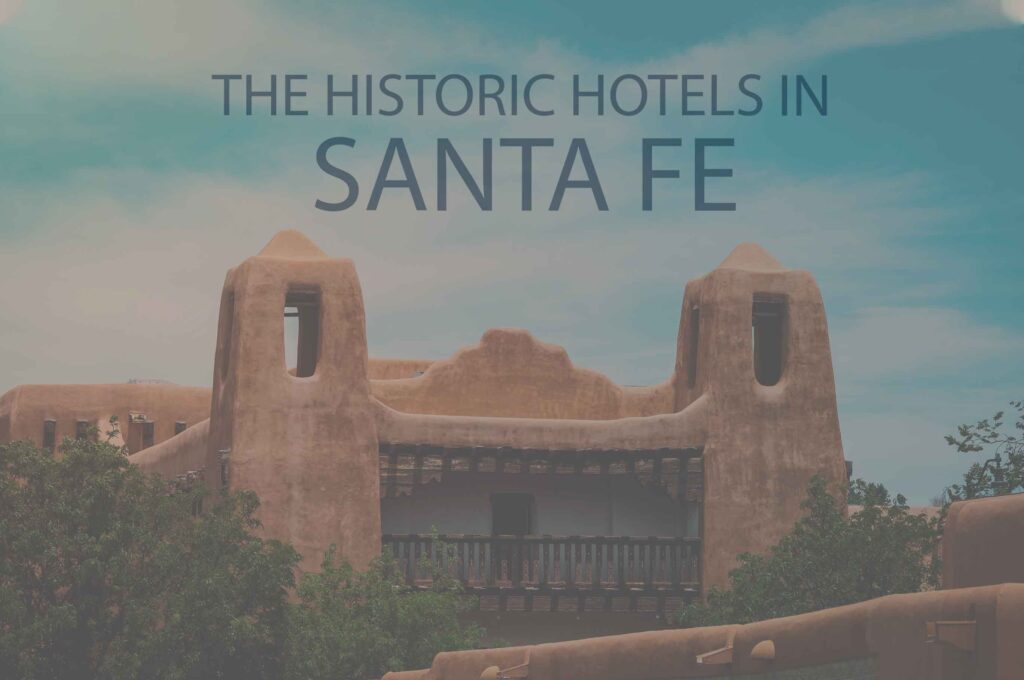 One of the oldest cities in North America, the city of Santa Fe is steeped in history. Don’t believe us? Take a stroll through the streets, and you’ll witness over a thousand years of history! The city center dates over two centuries, and the city is filled with Spanish Colonial buildings. Even some of the newer properties occupy old buildings that feature classic Santa Fe elements, including the hotels! With that being said, we’re here to encourage you to spend your nights at a historic hotel in Santa Fe! Many of the historic hotels in Santa Fe NM have interesting stories, and they also capture the historic heritage of the city really well. So, without further ado, let’s take a look at them one by one!

Inn of the Turquoise Bear

The first historic hotel in Santa Fe that we’d love to introduce to you is the Inn of the Turquoise Bear. This inn occupies the home of Witter Bynner, a prominent citizen of the city for almost 50 years. He created his rambling adobe villa from a core of rooms that date to the early 1800s. He and Robert Hunt, his long-time friend, were infamous for the riotous parties they hosted on the estate.

Then, in 1996, Ralph Bolton & Robert Frost bought the estate and built a wonderful bed and breakfast. The magnificent property was fully restored and is now a member of the National Register of Historic Places. The details of this hotel haven’t been altered in any significant way. Today, you can still even see reminders of the Chinese decoration that Witter used.

The original building of the Drury Plaza Hotel was first built in the late 1950s. This five-story building was then turned into a hotel in 2014, meaning it’s a relatively new addition to Santa Fe’s list of hotels. Though new, this gay-friendly hotel in Santa Fe is a terrific example of the city’s Territorial-style. Once a hospital, the building’s original architectural elements can still be found today.

Moreover, this historic hotel in Santa Fe is one of the buildings in the city that’s believed to be haunted. As we said earlier, this hotel was once a hospital. Legend has it that a young boy used to haunt Room 311. It was so scary that officials had to close that room off. Apart from that, many reported having witnessed mysterious slamming, flickering lights, and other paranormal activities.

The Pueblo Bonito Santa Fe is one of the most enchanting historic hotels in downtown Santa Fe. This two-story adobe building is a favorite among travelers for so many reasons. Named after the archaeological site “Pueblo Bonito” of Chaco Canyon, this historic hotel in Santa Fe was given its name almost a century ago by Mr. Al Kempineck. After purchasing the building, he made it into a beautiful apartment complex for visiting politicians and artists.

Today, the rooms on this property will take you back in time. They’re equipped with wood-burning fireplaces, charming Southwestern folk furniture, and the spirit of old-time Santa Fe. And even with today’s standards, compared to other historic hotels in Santa Fe NM, this hotel is relatively more affordable, which is a huge plus for budget-conscious travelers. For more affordable hotels, check out these best cheap hotels in Santa Fe!

The historic hotels in Santa Fe NM don’t always have to be big and lavish. If you’re looking for a historic hotel in Santa Fe that won’t break your bank, El Rey Court is a nice option. The building was built along the original route 66 and opened its door back in 1936. Since its opening, this hotel has been renovated and upgraded countless times.

As you can expect, more rooms were built, and new modern amenities were added. Even the neighboring motel, Alamo Court, was integrated into El Rey. The latest upgrade was done in 2018, refreshing the guestrooms and adding the La Reina bar. Today, it’s one of the most beloved hotels with traditional Northern New Mexico adobe-style architecture.

Celebrating the city’s unique history and culture, the Old Santa Fe Inn is another great addition to our list of the best historic hotels in Santa Fe NM. As the name suggests, you can expect a vintage, Southwestern vibe from this hotel. This experience can be felt even in the guestrooms and suites. No matter which room you book, you’ll see New Mexican style throughout to the smallest details.

Since Santa Fe was first founded back in 1610, the hotel has been the go-to spot for gathering among locals and travelers. Set in the heart of the city, this hotel will place you within steps away from some of Santa Fe’s most historic landmarks and infamous attractions. Also, it’s been a Historic Hotels of America member since this year!

The Inn of Five Graces

The Inn of Five Graces has to be one of the most unique historic hotels in Santa Fe NM. Set in one of the city’s most historic neighborhoods, you can easily walk past the inn and not even realize it’s there! That’s because it blends seamlessly into the neighborhood (just take a look at the picture below)! And if you’re wondering, the hotel’s name, “Five Graces,” refers to an Eastern concept of the five graces of sight, sound, touch, smell, and taste.

This historic hotel in Santa Fe was once the Seret’s 1001 Nights. The owners, Ira and Sylvia Seret, then transformed it into a one-of-a-kind resort. All of the suites on the property are decorated with treasures collected during the owners’ travels in Central and South Asia. Now, it boasts plenty of top-notch amenities like an on-site spa, live music, a fitness center, and more!

What we have here is Hotel St Francis, a member of the National Register of Historic Places. This hotel has the distinction of being the city’s oldest hotel. Built as the De Vargas, this historic hotel in Santa Fe is like a museum. Furthermore, it features simple Franciscan traditional sacred art, artifacts of New Mexico, and historical monochrome photographs of Santa Fe’s early history. All of them you can find in the hotel’s lobby and hallways.

Like other historic hotels in Santa Fe NM, the guestrooms are big and cozy. But what differentiates them from others is their neutral color palette. Each room balances vintage wooden furniture with modern comforts. Many also come to this hotel to visit its Secreto Lounge, which is popular for its garden-to-glass cocktails. Made using fresh fruits, herbs, and veggies, you should try them out when you’re staying here.

Up next is the Hilton Santa Fe Historic Plaza, one of the most historic hotels in Santa Fe NM. A member of Historic Hotels of America since 2014, it’s only two blocks away from, as you can guess, the Santa Fe Plaza. Apart from that, it’s also only a short walk away from the Georgia O’Keeffe Museum, as well as some shopping and dining options. But aside from its location, this hotel is also popular because of its rich history.

Formerly named Santa Fe Hilton Hotel Inn, it opened in 1973 in the city center. Moreover, it was built on a four-acre parcel, which included two adobe houses associated with Santa Fe’s founding families. Then, in 2005, the hotel was rebranded as the hotel we all know today. With a strategic location, modern amenities, and impeccable service, it’s now one of the city’s most well-known hotels.

Like many other historic hotels in Santa Fe NM, the La Posada De Santa Fe wasn’t like the hotel all now know. It was originally built in 1882 as a three-story mansion called the Staab house. The mansion was the home of Abraham and Julia Staab. They’re members of high society in the city. When Abraham Staab passed away in 1913, the mansion then passed through various hands. Two decades later, R.H. and Eulalia Nason bought the property and transformed it into a hotel named La Posada.

The hotel then became a fancy resort then it was expanded. Additionally, it was also awarded AAA Four Diamond Award! Today, this historic hotel in Santa Fe is one of the most sought-after hotels not just in the city, but also in the country. With modern amenities like a pool, spa, and fitness center, no wonder it’s named one of the most luxurious hotels in Santa Fe. Psst, it’s rumored that Mrs. Staab still haunts the property!

Did you know that the Inn & Spa at Loretto was once the site of an all-girl school? In the year 1853, the Sisters of Loretto opened a school for girls. Fast forward two decades later, the construction of a chapel began. While the choir loft was already built, the staircase to access it wasn’t finished as the architect died. After the sisters prayed a novena to St. Joseph, a carpenter appeared and built the staircase with only a hammer and a carpenter’s square. Before he was paid, we disappeared.

Unfortunately, the school fell into disrepair. In 1975, the Inn & Spa at Loretto replaced the school. Featuring a classic adobe style, it became one of the most photographed buildings in New Mexico. Since then, this historic hotel in Santa Fe has been attracting travelers. The guestrooms reflect the colors and patterns of local Native American tribes, and the hotel also boasts the only penthouse in Santa Fe!

La Fonda on the Plaza

While there are many historic hotels in Santa Fe NM, it’s safe to say that La Fonda on the Plaza is one of the most iconic ones. With an unbeatable location, an extensive art collection, and walls that have hundreds of stories to tell, this hotel is a must-visit. It’s basically a century-old hotel that’s breathing history lesson. Opened in 1922, it started as a modest inn. It grew and evolved as one of the most prominent throughout the years. Its last renovation, which occurred in 2013, resulted in more modern guestrooms. Of course, the historical features are still maintained.

During the Manhattan Project in the 1940s, countless scientists working at the nearby Los Alamos Laboratory spent their nights at this historic hotel in Santa Fe and enjoyed the scrumptious meals the restaurant offered. Today, this hotel offers the perfect blend of old-world tradition with modern luxury and convenience, making it the ideal base for travelers who want to enjoy everything the city has to offer.

Recommended Things To Do in Santa Fe