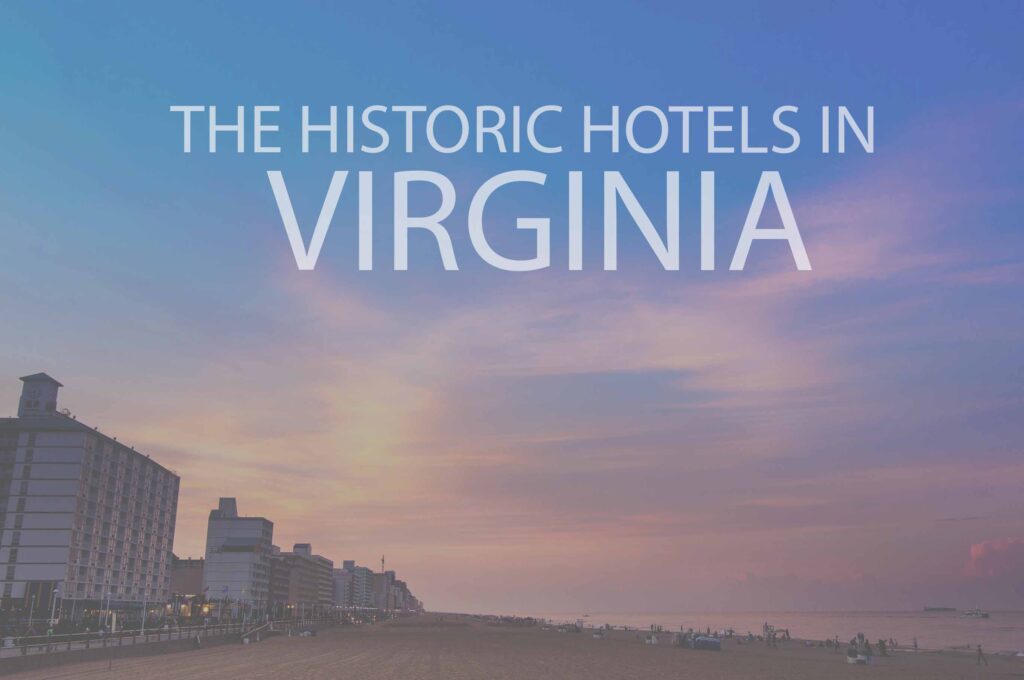 Virginia is rich in both history and tradition. It’s the site of the first permanent English settlement and eight former US presidents’ birthplace. Aside from that, it’s also blessed with natural beauty. Travelers worldwide love to flock here to admire its beautiful pine forests, sandy beaches, and stunning mountains. And when it comes to accommodation options, there’s a lot. However, instead of staying at a regular hotel, why not spend your nights at a historic hotel in Virginia? Providing an insight into the town’s history and the hotel’s architecture, they’re more than just a place to have a good night’s sleep. Though old, these time-tested hotels still offer plenty of modern amenities. Want to know which historic hotels we recommend? Keep reading!

For many reasons, Keswick Hall has been one of Virginia‘s top destinations since 1912. Inspired by an Italian villa, this majestic mansion is popular for its first-rate service. Apart from welcoming travelers, this hotel was also used to film the 1981 romantic comedy The Four Seasons, starring Alan Alda and Carol Burnett. It was originally built as a family estate and was later a country club.

This historic hotel Virginia has to offer then reopened in 2021 after undergoing a complete renovation and expansion. The new hotel now includes transformed guestrooms and suites, a signature restaurant, a refreshing infinity pool with cabanas, tennis courts, and plenty more. Offering celebrity treatment and world-class service, this historic hotel in Virginia won’t disappoint!

A member of Historic Hotels of America since 1994, the Williamsburg Inn is another great historic hotel in Virginia that we’d love to recommend. This hotel, which is next to the Colonial Williamsburg Historic Area, is regarded as one of the most complete community restorations in the world. The inn, which John D. Rockefeller, Jr. built in 1937, showcases the greatest elements of Neoclassical architecture with its whitewashed brick exterior, columns, and arches.

After undergoing several renovations, this Williamsburg hotel now has a refreshed and elegant atmosphere with English Regency-styled interiors. Moreover, all 62 guestrooms and suites offer guests a royal treatment, just like Rockefeller’s original visions. Finally, this historic hotel Virginia has to offer is also said to be haunted!

A building with history, the Hilton Richmond Downtown is a popular historic hotel in Richmond, VA. Due to its central location, many stay at this hotel so they can be near the city’s top attractions. Better yet, it offers guests a complimentary shuttle to top spots within a two-mile radius! However, did you know that this reputable hotel was once a department store? Yes, this historic hotel Virginia has to offer is housed in the former Miller & Rhoads department store. It’s an iconic building with more than 100 years of history.

Throughout its 105-year lifespan, the department store played a huge role in the Richmond community. During the 20th century, the store was at its peak and was home to the Tea Room, which featured regular fashion shows. But as we all know, nothing good lasts forever. The department store would slowly lose its momentum. In 2006, work began converting the department store into a 250-room hotel we all recognize today.

The Blackburn Inn and Conference Center

The Blackburn Inn and Conference Center is set within a former hospital called the Western State Hospital. The hospital was established in the early 1800s and is now part of the National Register of Historic Places. The building that now makes up the hotel was but a minor part of this enormous complex, which long served as the hospital’s administrative headquarters. The building was created in the 1830s as part of a larger plan by Thomas R. Blackburn, a talented architect, and protege of Thomas Jefferson.

After undergoing an extensive renovation throughout most of the 2000s, the building opened in 2018 as the Blackburn Inn, honoring Thomas R. Blackburn. Original artwork still adorns the walls of the hotel’s art gallery, so you can always admire the works by local artists. In addition to the hotel’s fantastic amenities, you’ll also be able to enjoy the close proximity to the downtown’s best attractions.

Another historic hotel in Richmond, VA, that we’d love to show you is the Linden Row Inn. Listed on the National Register of Historic Places, this hotel has such an illustrious past. The name of this historic hotel in Virginia refers to the row houses in Ellis Garden, which is where Edgar Allan Poe is thought to have courted Elmira Royster. In 1998, the inn underwent a comprehensive renovation and was turned into a full-service inn.

The guestrooms at this hotel showcase 20th-century furnishings, accompanied by modern amenities like Wi-Fi, air conditioning, and a flat-screen TV. In addition to that, there’s also regular housekeeping, making your stay enjoyable. Furthermore, according to the rumors, this hotel is haunted by the spirit of Poe’s mother. She once stayed briefly in one of the houses. No one knows whether the rumor is true or not, but this historic hotel in Richmond, VA, surely has something supernatural to offer!

Hotel 24 South is a historic hotel in Virginia that’s set adjacent to Staunton’s renovated Main Street neighborhood. The city of Staunton is home to many historic buildings that have been painstakingly preserved, and this hotel is one of them. This magnificent brick building, which H.L. Stevens designed, debuted in 1924 and boasted a unique Wurlitzer organ. The hotel then swiftly rose to fame and became a top gathering spot for Shenandoah Valley society.

Arguably the most vintage hotel in the city, this historic hotel Virginia has to offer boasts Colonial Revival architectural style and is a current member of Historic Hotels of America & Stash Hotel Rewards. Aside from upscale amenities, guests can still witness the hotel’s historic neon sight that was erected in 1950.

At Quirk Hotel Richmond, a popular historic hotel in Richmond, VA, you’ll be able to experience a bit of local history! The former Mosby store was the home of a premium department store. Extremely popular, it was designed in 1916 by very reputable department store architects Starrett & Van Vleck. The building’s original ironwork staircase, 13-foot grand arches, and stunning pine floors are just a few examples of the preserved architectural heritage.

Living up to its name, this historic hotel in Virginia is pretty quirky. It offers 73 art-centric guestrooms with 10 different room types. What’s more, the made-to-order beds are made from reclaimed wood and floor joists that were saved during demolition. While you’re here, you must stop by the Quirk Art Galler on the first floor. It showcases arts from local and international artists as well as unique gifts.

Back in 1843, there was a young German immigrant named Louis Rueger who opened a saloon and cafe called Lafayette Saloon (now The Commonwealth). The salon thrived until the Civil War and was a casualty of the great fire of 1865. It was then rebuilt to be bigger and better than before. Rueger’s sons and grandsons would then join him in making the salon bigger as they added boarding rooms. After that, the demand for the rooms grew, and in 1901 they acquired the surrounding buildings and opened a 24-room hotel, which was the first Hotel Rueger.

In the 1950s, this historic hotel in Virginia changed ownership and was then renamed Hotel Raleigh. Then, in 2004, it underwent a renovation and was reintroduced as The Commonwealth. Now, this hotel is known as a landmark on Bank Street, offering travelers luxury amenities and impeccable service. What’s more, this historic hotel in Richmond, VA, also welcomes four-legged travelers!

Since it first opened in 1913, The Virginian Lynchburg Curio Collection by Hilton has been a well-known landmark in the heart of Lynchburg. Like many other historic hotels, this one also has both triumphs and challenges. The hotel was having a hard time in the 1960s before closing. Then, in 1972, it reopened as the first dormitory for Lynchburg Baptist College. As the hotel entered the 2010s, everything began to get better. Two developers, George Stanley and Blair Godsey, brought the hotel back to life and turned it into a sumptuous luxury hotel.

This majestic hotel has been meticulously renovated with new modern amenities to match its historical magnificence. Additionally, this historic hotel in Virginia also offers 8,000 square feet of event space, which is huge! Being a downtown hotel, there’s plenty for guests to see and explore. Guests can explore the local arts scene, wader along the James River, and visit the nearby eateries and shops on foot.

Want to experience the past luxury in a historic hotel in Virginia? Look no further than The Mimslyn Inn! Built in the traditional Georgian Revival style, this fabulous property rises gently from the Shenandoah Valley. Since 1931, it has been welcoming visitors with warmth and charm. Speaking of which, this hotel was constructed on a Civil War hospital site just months after the 1929 stock market crash. Its grand opening saw over 700 guests dancing and dining in the hotel.

Rich Washingtonians were fans of this hotel, and they’d go to Luray by train for the hotel’s exquisite dining room and spend their night there. The hotel now has 45 spacious guestrooms and suites, a Manor House, old cottages, and a luxury cottage collection after undergoing a complete renovation. Additionally, it also offers Shenandoah travelers the best guest experience possible through its dining options, outdoor pools, spa services, and other top-notch amenities.

The number one historic hotel in Virginia on this list is none other than The Omni Homestead Resort. Set in the beautiful Allegheny Mountains, this stunning hotel has welcomed travelers from around the world for over 250 years. The resort’s first guests of the area were the Native Americans who used the waters to rejuvenate and pamper themselves on their many excursions. Even today, many travelers still love spending their days at this hotel as it boasts plenty of high-end amenities like indoor and outdoor pools, a spa, and two championship golf courses.

However, in 1901, a fire that started in the pastry shop burned the entire hotel. Thankfully, since the resort was not at full capacity, guests and staff were able to escape without any serious injury. After that, the hotel was rebuilt, and one year later, it was back in business. Throughout the years, the resort has changed hands and been renovated multiple times. In 2013, it joined the Omni Hotels & Resorts family and is now called the Omni Homestead Resort. Today, this historic hotel Virginia has to offer boasts almost 500 guestrooms and suites that reflect the resort’s historical legacy.

Recommended Things To Do in Virginia