11 Historic Hotels in Portland OR 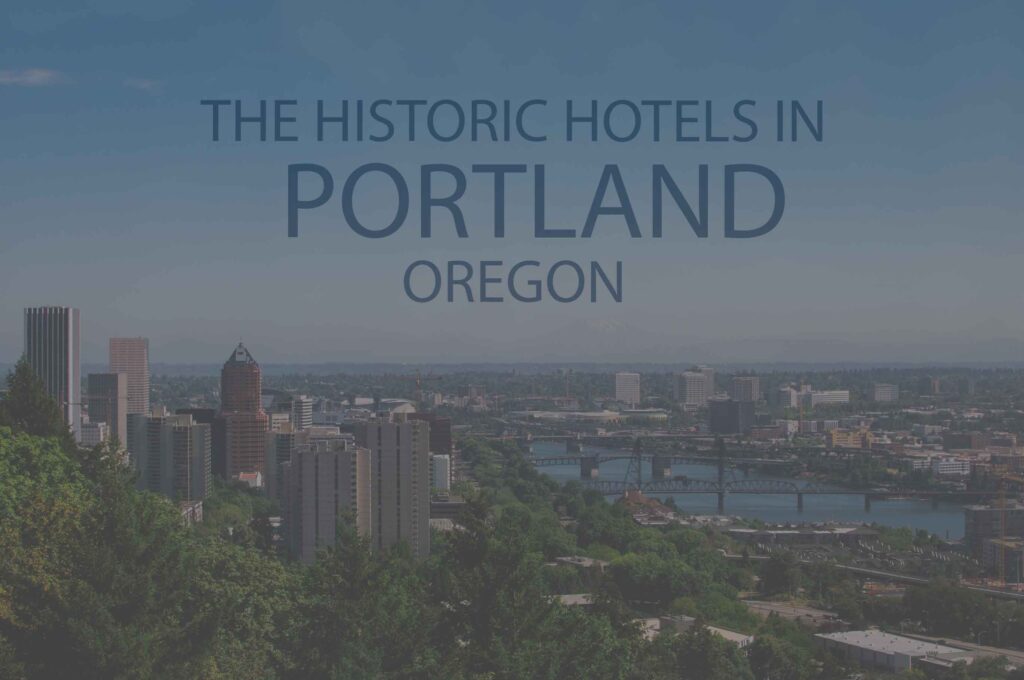 As Oregon’s largest city, Portland is hands-down a must-visit. Straddling the Willamette River, it’s considered by many as one of the most desirable cities in the US to live in, which speaks volumes about the city’s awesomeness. And if you’re a history buff, Portland can offer a unique and interesting city break with tons of history thrown in. If you want to explore the city’s historic charm, why not stay at one of the historic hotels in Portland, OR? Instead of staying at a boring chain hotel, you should try spending your nights in a hotel that has stood the test of time (and is probably haunted)! With intriguing past and jaw-dropping architecture, Portland historic hotels won’t disappoint. Want to know which hotels we recommend? Let’s take a look at them one by one!

A gathering spot since 1909, Hotel Lucia is one of the most popular historic hotels in Portland, OR. This Portland, Oregon, historic hotel was built by a successful German immigrant and businessman, Phil Menschen. It was built as an expansion of his well-liked Imperial Hotel. This hotel played a great role in shaping Portland’s culture and history from the very beginning. And by the end of 1949, the Imperial Hotel was split into two separate establishments, with the newer one named the New Imperial Hotel.

Then, in 1950, the New Imperial Hotel was purchased by Albert Gentner. Under his management, the hotel managed to welcome guests to the heart of Portland for the next 50 years. After that, Provenance Hotels purchased the hotel in 2001. It was then renovated entirely and renamed Hotel Lucia. This Portland hotel is also now a member of the National Register of Historic Places.

Currently listed on the National Register of Historic Places, The Benson Portland is one of the city’s popular landmarks. Built by pioneer lumberman Simon Benson in 1913, it was originally called the New Oregon Hotel. It was built as an annex to the adjacent Oregon Hotel. However, it quickly acquired a new name, “Benson,” after it had only opened as the older hotel was demolished in 1959 to make room for a new addition.

Nestled in the city’s beautiful downtown area, this hotel is also known for its Historic Stairwell. It’s a twelve-story original marble stairwell featuring more than 160 portraits and stories of Portland and its historical landmarks. But like many other Portland historic hotels, this hotel is rumored to be haunted, and it’s by none other than Simon Benson himself! Many guests have reported seeing his ghost roaming around the hotel’s bar and common area.

Stay at The Mark Spencer Hotel, one of the most historic hotels in Portland, OR, and step back in time! This Theater District building was first established in 1907 as the Nortonia Hotel. It was where visitors from all over the world found comfort in the warm ambiance. In order to have quick and easy access to the area’s entertainment venues, performers would frequently stay at this hotel. Stars like Louis Armstrong, Mel Torme, Sammy Davis Jr., and countless others have graced this hotel’s halls.

In 1966, the Nortonia was renovated and renamed the Mark Spencer Hotel. It retained its upscale atmosphere and Portland charm while also benefiting from modern furniture and chic interior design. The hotel is dedicated to making guests feel like a local; this devotion is reflected in the excellent rooms and suites.

What we now know as Hotel DeLuxe was once called Hotel Mallory. It began operating back in 1912 and is popular for being a luxurious retreat. One of its highlights was the Crystal Room (now the Screening Room), a ballroom with Grand Piano and orchestra pit. There was also the Green Room, which was a billiard room fitted with a pool table, fine cigars, and more. Across the lobby, ladies would socialize in the Lady’s Parlor, which is currently the Editing Room.

As one of the historic hotels in Portland, OR, this property has undergone plenty of remodeling and renovations. However, the hotel’s last major remodel was in the late 1940s. It was designed to have a Regency style, complete with European crystal chandeliers. If you’re visiting Portland, we highly recommend staying here. A member of the National Register of Historic Places, it’s a hotel that’ll make you feel glamorous. Also, did you know that it’s also considered one of the most romantic hotels in Portland, OR?

There are many historic hotels in Portland, OR, but adding The Nines to this list is a must. It’s a boutique hotel in Portland that’s known for its five-star service. The original 15-story hotel was built in 1909 and functioned as the corporate office and main shop for Meier & Frank, which was once heralded as the biggest retailer west of the Mississippi. It was also the building that featured the first escalator installation in Portland! As the number one department store in the city, customers would often dress up to show off their looks. It was, and until today, is still the place to see and be seen.

In 20115, the building was transformed into a lavish hotel. While the original exterior was retained, a seven-story atrium was added, allowing guests to easily access the beautiful views and natural light. With a nostalgic and modern approach, this hotel quickly rose to fame. Additionally, the hotel’s name, “the Nines,” was a homage to the Meier & Frank Building’s roots as a beacon of “dressed to the nines” fashion.

Another ace on this list is none other than the Ace Hotel Portland. This property was opened in 1912 and was called the Clyde Hotel at that time. Ben Stark was then briefly before becoming the Ace that we all know today. This hotel was designed to be a budget-friendly hotel that would appeal to the creative class. When it first opened, it wasn’t the most appealing hotel in the city. The lift was narrow, and many rooms didn’t have private bathrooms. Thankfully, this lodging is fully equipped with everything you need and more!

One of the main reasons this hotel is named one of the best Portland historic hotels is its atmosphere. Even though it’s been renovated, it still has this vintage charm that somewhat feels homey. Apart from that, it’s also set in the heart of downtown Portland. This means you’ll be only a block or two from literally just about everything.

Up next is Sentinel, a Provenance Hotel, Portland’s most storied hotel. Seen as one of the most historic hotels in Portland, OR, this hotel is set in two historic downtown buildings – the former Seward Hotel (now the hotel’s East Wing) and Elks Lodge (which is now the West Wing). Built in 1909, William Christmas Knighton built this accommodation. He was the first Oregonian architect known to have used Viennese-influenced Early Modern and modified Arts and Crafts styles in his works. Thanks to him, the hotel is regarded as one of the most innovative buildings in Oregon!

Like many other Portland historic hotels, this Portland, Oregon hotel has undergone multiple ownership changes and renovations. Apart from that, it was also designated a National Historic Landmark in the 1980s. When Gus Van Sant, the director of My own Private Idaho, filmed some parts of the movie there, it gained even more recognition.

Say hello to Embassy Suites Portland – Downtown, one of the most historic hotels in Portland, OR. Originally named the Multnomah Hotel, this Portland, Oregon, historic hotel has been offering outstanding service and attractively decorated accommodations since 1912. This hotel has hosted many notable visitors throughout its history, like Charles Lindbergh, Elvis Presley, and nine US presidents, from Theodore Roosevelt to Richard Nixon. Pretty amazing, right?

Here, we have The Heathman Hotel, an iconic hotel set in the heart of Portland. Among Portland historic hotels, this one is a standout. The original hotel was built in 1926 by contractor and hotelier George Heathman. The following year, the city developed into a bustling metropolis. Thus, it needed more higher-end hotels to meet the needs of the wealthy locals and visitors. Heathman then began building a sister hotel that was only a block from the original. The New Heathman Hotel was opened in 1927, and it was a ten-story hotel that boasted decorative details in the Jacobean Revival style.

In 1984, the Heathman underwent a huge renovation. Its entrance was moved to Broadway, enhancing its visibility. Apart from that, it also dropped the “new” designation, referring to it simply as the Heathman Hotel. Then, in 1028, there was another major renovation, which made the hotel brighter and more modern. However, did you know that this Portland, Oregon, historic hotel is more than just a spot for tourism? Yes, it’s also a spot for paranormal activities! According to the rumors, a person jumped to their death from one of the rooms. Guests report hearing screaming from one of the rooms ending in 3.

The Society Hotel is another option that deserves a spot on our list of the most historic hotels in Portland, OR. This teal building has a vivid history. Back in the 1880s, it served as a haven for sailors and acted as a substitute for the shady “crimphouses” that once populated the city. Then, it became a focal point of Portland’s Japantown until the internment, and the last regular resident died in the 1970s. Since then, this hotel has been largely empty.

Another fun fact about this historic Portland, Oregon hotel is that the building used to be a story shorter! However, what’s odd is that the developers chose not to simply add a new story on top, as would have been logical. Instead, they uprooted the building, lifted it a story, and added a new layer of stores between the original first floor and second floor.

The last Portland, Oregon, historic hotel on this list is the McMenamins Crystal Hotel. This iconic west-end accommodation offers guests live music, a pristine pool, and handcrafted drinks. Built back in 1911, this hotel used to house auto parts stores on the ground floor and lodgings above. After World War II, it hosted the Club Mecca and later the Desert Room. Then, in 1978, this property housed a gay bathhouse called Club Portland and a gay bar. After a huge renovation and restoration, the hotel was named McMenamins Crystal Hotel on May 3, 2011.

Today, this hotel is known as one of the most historic hotels in Portland, OR. It has 51 rooms, all of which are wonderfully quirky and eclectic. Plus, each room is named after a song or performance performed during the Crystal Ballroom’s 100-year history. Best of all, you don’t have to leave the hotel to find tasty food!

Recommended Bars/Restaurants in Portland OR

Recommended Things To Do in Portland OR