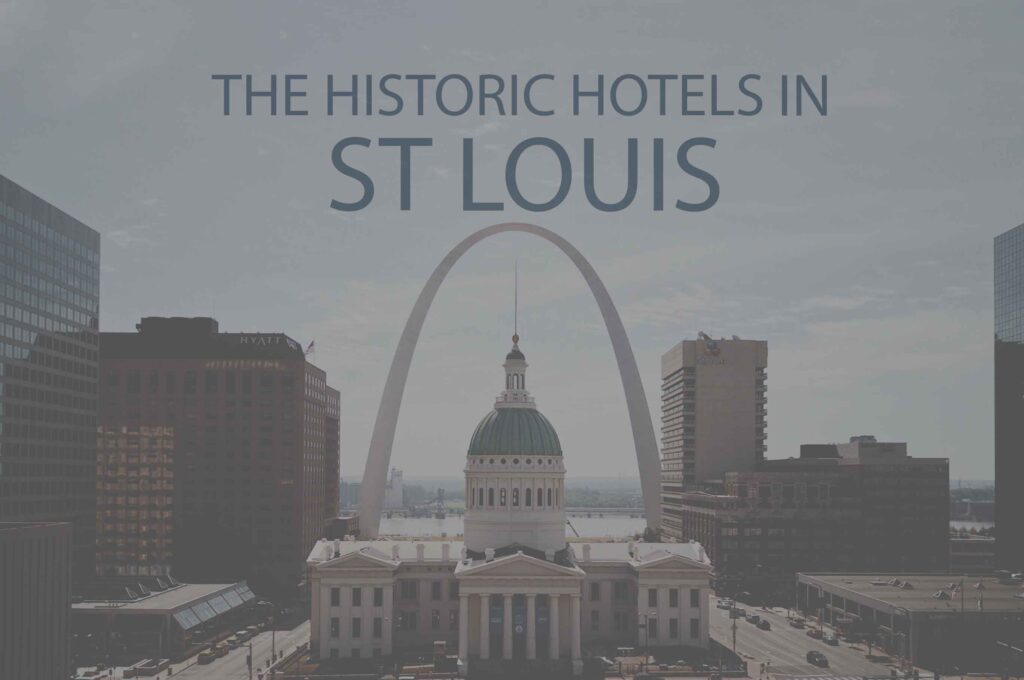 The city of St. Louis should be recognized more often for its historical significance. If you’re looking for Midwest memories, you won’t regret booking a flight to St. Louis. The Gateway City is brimming with history, and plenty of historical spots are waiting for you to explore. It’s the home of one of the biggest Mardi Gras events in the country and where the ice cream cone was born! And when it comes to accommodation options, many St Louis historic hotels are ready to welcome you with open arms! The historic hotels in St Louis, MO, have plenty of stories to tell, and they’re also conveniently located near some of the city’s must-visit attractions. A stay at one of those hotels will easily make your vacation much better. Interested in knowing more about them? Here are the best historic hotels St Louis, MO has to offer!

The three-star Embassy Suites Saint Louis – Downtown is the first hotel on this list. As one of the top St Louis historic hotels, you can expect nothing but the best from this accommodation. Unlike some historic hotels in St Louis, MO, this property was built in two phases. The first was in 1906, and the second was in 1919. It was originally built as the Grand Leader Department Store, covering an entire block along the Washington Avenue corridor.

As with other historic hotels, St Louis, MO has to offer; this hotel manages to marry the old with the new. The interiors of the hotel and its warm color palettes manage to take you back in time. However, you can also expect modern conveniences like a fitness center, a swimming pool, and well-appointed guestrooms. Not to mention, its downtown location allows you to explore all the top things to do in St. Louis!

Up next on our list of the best historic hotels in St Louis, MO, is Drury Plaza St. Louis at the Arch. This hotel conveniently occupies a whole block of the downtown area. Back in the early 1900s, this neighborhood was primarily made up of manufacturing warehouses and office space. That said, three buildings that were listed on the National Register of Historic Places were renovated and transformed into Drury Plaza St. Louis at the Arch!

Purchased in 1997, some of the original building elements, including the matching millwork, Italian marble, and Waterford crystal chandeliers, were all restored by Drury. Fast forward to 2017, a terrace on the eighth floor was built, giving visitors breathtaking views of the Gateway Arch and the downtown area. Today, it’s one of the city’s most popular hotels, with many hotspots only a short drive away.

Though the current Le Méridien St. Louis Downtown looks like it’s one of the most modern hotels in St. Louis, this hotel is actually rich in history. Set in the historic downtown area and built in 1913, it has been listed on the National Register of Historic Places since 1984. Before being renovated and converted into a 96-room hotel, it was a vacant Hotel Majestic. But after Hawkeye Hotels purchased the hotel, the building was revamped to showcase the hotel’s signature midcentury charm.

You’ll witness a nostalgic nod to the 1960s French Riviera throughout the hotel. Moreover, each guestroom is fitted with standard in-room amenities, making it a nice choice for guests who want a memorable vacation. Not to mention, the location is also fancied by many. It’s only moments away from places like St. Louis Gateway Arch, Busch Stadium, and other top attractions. But if you want to catch that super early flight, check out the best hotels near St. Louis Airport instead!

Similar to other historic hotels in St Louis, MO, the Drury Inn St. Louis Union Station is brimming with history. The hotel was built back in the year 1907. The goal of constructing this hotel was to provide a safe sanctuary for traveling railroad workers. It could accommodate up to 400,000 migrant railroad employees each year, which was super impressive. This beautiful hotel is set sweet of the Union Station train shed, hence, the name.

Of course, like other St Louis historic hotels, this hotel has undergone many renovations. The renovations of this building managed to preserve its original features, including the leaded glass windows and oak paneling. Today, it’s a popular option for travelers wanting to stay in the heart of St. Louis, as many attractions are within easy reach. Not to mention, it’s loved because of its amazing amenities, including a complimentary hot breakfast every morning and a state-of-the-art fitness center.

As the city’s longest continuously running bed and breakfast, it’s only fitting for Lehmann House Bed & Breakfast to be called one of the top St Louis historic hotels. The Romanesque Revival mansion opened in 1989 and has been a favorite among travelers since then. Unlike other historic hotels St Louis, MO has to offer; this property feels extra homey. It takes you back in time, and thanks to the numerous restorations of this 10,000 sq ft property, guests can enjoy its modern amenities to the fullest!

Every guestroom on the property has a special character, along with a private bath, making it one of the most romantic hotels in St. Louis. They’re all furnished with antiques and other must-have amenities as well. Plus, you can wake up to a tasty full breakfast every morning! What’s more, this lodging is set in the center of everything! It’s set in Lafayette Square, the city’s historic district. Staying here means you’ll never be too far away from some of the area’s top restaurants and standout shops.

The Magnolia Hotel St. Louis is one of the most historic hotels in St Louis, MO. However, it wasn’t called the Magnolia Hotel back then. The hotel first opened in 1925 as the Mayfair Hotel. Since its opening, there have been numerous historical firsts there. For instance, it’s where the city has its first female general manager, which also helped the hotel to be listed on the National Register of Historic Places back in 1979. Aside from that, it’s also popular for being the birthplace of Cary Grant’s “chocolates on a pillow.”

Speaking of which, it’s said that in the 1950s, Grant laid out a chocolate trail through his penthouse suite that culminated on the bed. There, a single piece of chocolate and a message to his crush was placed on a pillow. Moved by his action, the hotel’s manager decided to have staff members start leaving chocolates on visitors’ pillows. Other noteworthy visitors of the hotel include Harry Truman, Lyndon Johnson, and John Barrymore.

Do you plan to stay in a boutique hotel in St. Louis? If that’s the case, you should take a look at The Last Hotel, one of the top St Louis historic hotels. As a landmark of fashion, this hotel was built inside the International Shoe Co. building. Opened in the year 1909, this hotel is rich in architectural history. It’s decorated with beautiful metalwork, terrazzo floors, and intricate stone carvings. It breathes new life while paying homage to the past by fusing historical elements with contemporary decor.

Like some historic hotels St Louis, MO, has to offer, the hotel’s name also has an interesting story. Its name is a quirky ode to the traditional trade of shoemaking. A “last” is a wooden form that’s formed like a real human foot, and it’s used to keep each design’s specific shape while leather is meticulously put on it. To shoemakers, a “last” is the soul of the shoe.

Another great addition to the list of the top historic hotels in St Louis, MO, is the Missouri Athletic Club. Opened in 1903, the hotel played a crucial role in welcoming dignitaries from all over the world when they came to the city for the Olympics and World’s Fair. Unfortunately, a fire that took 37 lives in 1914 completely destroyed the Club’s original building. But it didn’t take long for a committee to design a new club. The present-day building then began welcoming guests again just two years later, with a huge celebration that was attended by thousands of people.

Throughout the years, Missouri Athletic Club has welcomed many people, including Gene Tunney, the heavyweight champion, who spent New Year’s Eve here in 1927 in secret. Moreover, when President Nixon nominated Justice Harry A. Blackmun for a position on the Supreme Court of the United States, he also stayed at this hotel. Now, as one of the best St Louis historic hotels, it’s a nice option for those who want to stay in the heart of the city and explore sports events.

Among all of the historic hotels St Louis, MO, has to offer, The Royal Sonesta Chase Park Plaza has to be one of the best. Often called The Grand Dame of St. Louis, it has been welcoming locals and travelers for a century, offering rich history and opulent lodgings. Since it was opened in 1922, it has welcomed huge icons like Franklin D. Roosevelt, George Clooney, Frank Sinatra, and many more. If the imposing walls of this immaculate hotel could talk, there’d be no shortage of fascinating tales to tell!

During its heyday, it was undoubtedly one of the most popular hotels in the nation and was also the site of several significant events in American history. After a multi-million renovation was completed in the summer of 2019, this family hotel in St. Louis now has fresh updates. Today, deemed as one of the top St Louis historic hotels, it boasts around 400 elegant guestrooms and suites and modern conveniences that’ll make your stay unforgettable.

Our list of the best historic hotels in St Louis, MO, won’t be complete without Hotel Indigo St. Louis Downtown. This hotel is a member of the US National Register of Historic Places and is known for its top-notch services and lavish amenities. However, who would’ve thought it was initially an office complex called the La Salle Building? Once the construction of the complex was finished in 1909, it quickly became one of the busiest spots in the downtown area. Dozens of business tenants occupied the hotel. The structure continued to be a mainstay of St. Louis for many more decades.

As the name suggests, this beautiful hotel is set in the iconic St. Louis Union Station building. The station itself opened back in 1894. Featuring 32 tracks, it became one of the busiest train depots. On a regular day, a capacity of over 100,000 people was considered normal. Moreover, figures like President Harry Truman, Joe DiMaggio, and many others have all made appearances at Union Station. However, by 1978, it had become obsolete and was then renovated into a lavish hotel.

Set in downtown, St. Louis Union Station Hotel, Curio Collection by Hilton, one of the best St Louis historic hotels, is now a balance of renovation and nostalgia. Aside from modern conveniences, guests can still find elegant historic touches in the form of the original terrazzo floors, stained glass windows, terracotta bricks, and wooden carpentry detailing. Not to mention, most of the 539 guestrooms are fitted with artworks and decors that give the nod to Union Station’s history. Also, a Historic Hotels of America member, this hotel will transport you back to when travel was extraordinary!

Recommended Things To Do in St. Louis