10 Spectacular Sea Stacks Around The World 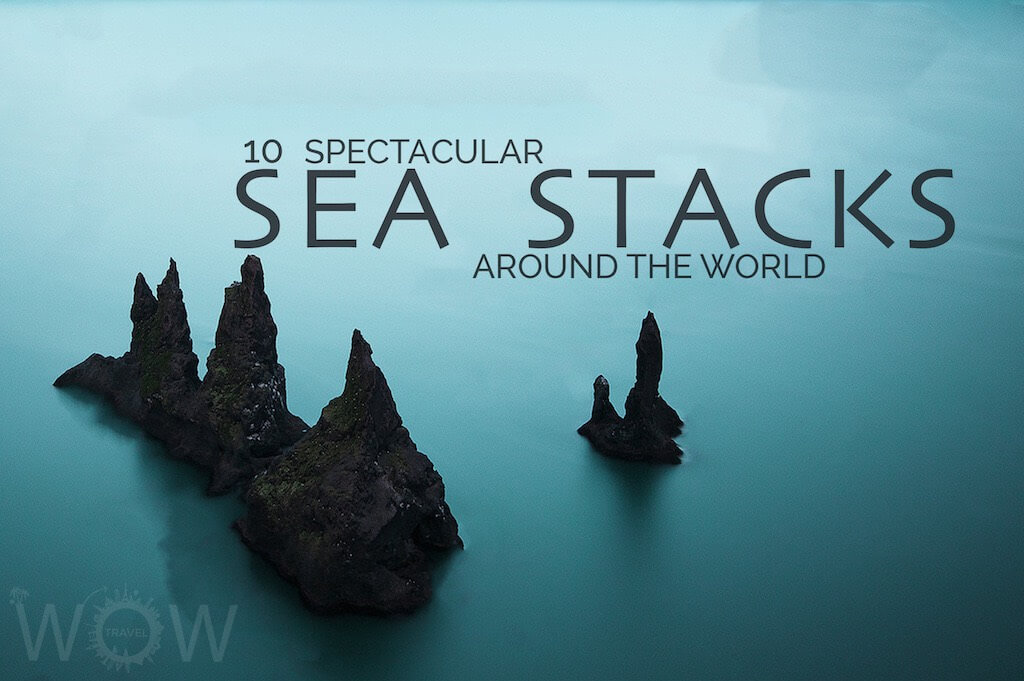 Mother Nature is wise and knows what she does. She is the greatest artist of all times and had shaped our beautiful planet over centuries, painted it with incredible colors and furnished it with breathtaking forests, sand dunes, lakes, and to decorate the shorelines of our continents she created the sea stacks. These steep rock columns were once part of the mainland or cliffs but were eroded by the water and wind. We want to see them as guardians or our coasts or natural statues who embellish our seas. Enjoy our 10 Spectacular Sea Stacks Around The World.

The Lange Anna is the symbol of the German North Sea island of Helgoland. She is 47 meters high and about 25,000 tons of heavy, free-standing rock (spine) from red sandstone with a floor area of 180 square meters in the extreme northwest of the island. The continuous strikes of waves created exquisitely beautiful formations such as caves and narrow peninsulas with various arches below. On and on the rocks several breeding seabird species: especially the herring gull (Larus argentatus) and the Northern Gannet (Morus bassanus) can be found here.

Old Harry Rocks are a pair of chalk stacks close to Handfast Point, It lies at the eastern edge of the Isle of Purbeck and is the start of the Jurassic Coast World Heritage Site. Old Harry Rocks were created through thousands of years of erosion by the sea and were originally a part of the chalk ridgeline that runs across the south coast joining up with the Needles on the Isle of Wight. The chalk ridge was formed approximately 65 million years ago when the area was under a shallow sea. Calcium deposits from sea creatures dying and falling to the sea bed slowly built up over millions of years to create the chalk ridge and plate tectonics brought the chalk up above the sea level before the last ice age. Rising sea levels at the end of the last ice age combined with erosion channeled out the chalk ridge creating the Solent and Old Harry in the process. Source: virtual-swanage

Ko Tapu is a tapered limestone rock in the Andaman Sea (Ao Phang Nga National Park), northeast of Phuket, Thailand. It stands approximately 20 meters (66 ft) tall and dates to the Permian period, about 280 million years ago. The limestone is composed of coral reefs and calcareous shells of marine organisms. Tectonic fragmentation and erosion of the original limestone outcrop, combined with seawater level fluctuations, formed the steep cliffs and karst towers that this island National Park is famous for. Ko Tapu was featured in the James Bond movie “The Man with the Golden Gun” in 1974 and has thereafter been informally referred to as James Bond Island. Source: epod.usra.edu

Sail Rock, or Parus Rock, is a natural sandstone monolith of the late Cretaceous age, located on the shore of the Black Sea, in Krasnodar Krai, Russia. It resembles the outline of a ship’s sail, hence its name. The monolith lies 17 km (10.5 miles) to the southeast of Gelendzhik, near the village of Praskoveyevka. Sail Rock has a sheer vertical slope confronting the shore of the sea, isolated from the mass of basic rock by geological forces. It is more than three-fourths revealed by the tide and lies perpendicular to the coast. Source: twistedsifter

The spectacular Old Man of Hoy is a 137 meter high sea stack of red sandstone near Rackwick Bay on the west coast of Hoy Island in the Orkney Islands, Scotland. This dramatic sea stack and iconic landmark is also a popular rock climb.

Haystack Rock is a gigantic sea stack located in Oregon, USA. This 72-meter tall monolith is the world’s 3rd tallest intertidal structure. This rock formation, which is a refuge for many sea birds, is a popular tourist destination.

The Twelve Apostles is a collection of limestone stacks off the shore of the Port Campbell National Park, by the Great Ocean Road in Victoria, Australia. Their proximity to one another has made the site a popular tourist attraction.

Kicker Rock (Leon Dormido) also known as the Sleeping Lion because of its resemblance, is located off the coast of San Cristobal. The remains of a lava cone eroded by the sea, the two vertical rocks rising 500 feet from the ocean form a small channel that is navigable by small boats. This Galapagos Islands natural monument has become a favorite sight for cruises due to the many Tropicbirds, Frigates and boobies that fill the surrounding air. Beneath the sea, the nearly crystal waters offer a brilliant show of colorful tropical fish and invertebrates. Source: TheNatureAnimals

Millions of years of erosion of the sandstone have created a coastline of steep cliffs, spectacular sea cliffs in on the island of Borneo. The most well-known landmark is the sea stack in front of the beautiful beach of Pandan Kecil, that resembles a cobra head coming out of the water. The Bako Park is home to the highly endangered proboscis monkey and contains an incredible variety of plant species and vegetation types. At Bako it is possible to see almost every type of vegetation found in Borneo.