12 Small Towns In Switzerland Worth Visiting 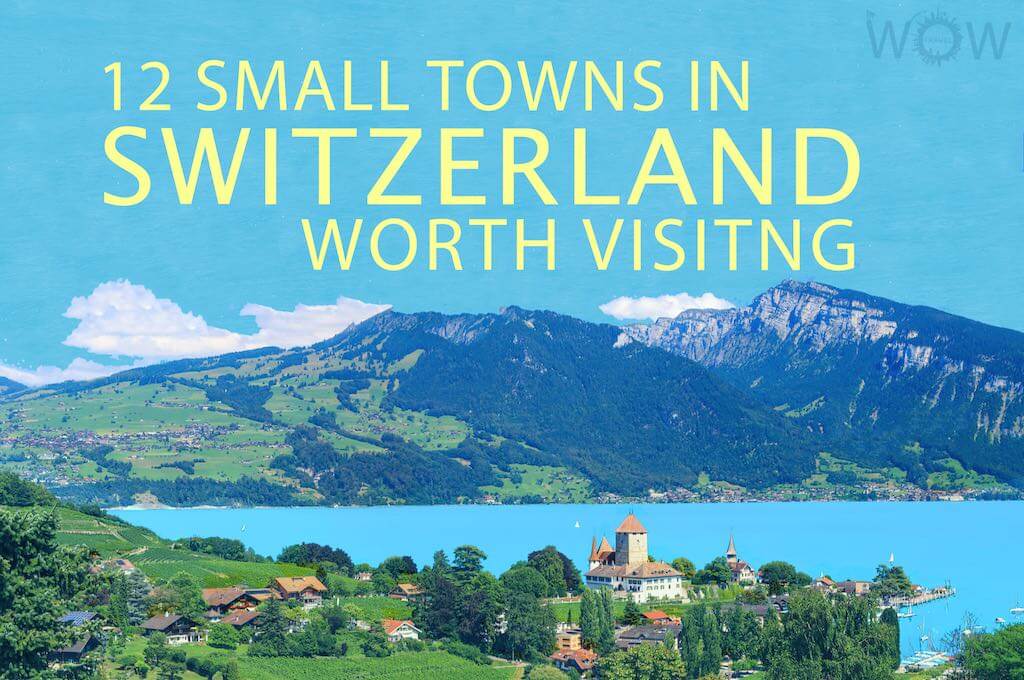 The beautiful landlocked country of Switzerland is on top of almost everyone’s bucket list of places to visit. The stunning mountains, crystal clear lakes, varieties of chocolates, cheeses, and friendly people are just some of the things that lure travelers to this beautiful part of the world, year after year. With its captivating landscapes, Switzerland is probably one of the places that has been most captured in movies. For the avid photographer cum traveler, some of the better places to point your camera at would be the smaller scenic villages that make this country what it is. Although these quaint villages are sometimes tucked away in remote corners of the country, getting to them is definitely worth the effort. Fun fact: did you know that in Switzerland, there are two of the Top 5 Longest Tunnels In The World?

This pedestrian, Alpine village in the Bernese Oberland, sits high on the edge of a cliff at 1,367 meters above sea level. Gimmelwald overlooks Jungfrau-Aletsch-Bietschhorn, the UNESCO world heritage site. This car-free scenic village with its cozy chalets decorated with flowers, grazing cattle, and expanses of green will make you feel like you’ve stepped into a land frozen in time. What’s most interesting about this village is that most of the 120 residents have the same surname!.

The small remote village of Guarda became a favored destination after it was featured in the world-renowned children’s book Schellen-Ursli. This intriguing village with its population of just 200 people is nestled high above the Inn river in the Lower Engadine mountains. With its well-preserved architectural heritage, for which it was awarded the Wakker Prize, the village which stays true to its Romansh traditions and culture, is a huge draw for tourists.

The beautiful village of Grindelwald attracted its first guests in the 18th century when the English decided to enjoy the bountiful views the region has to offer. Pictures of the beautiful vistas were printed and widely circulated, drawing more international visitors to the region. Grindelwald is surrounded by a spectacular mountain view with the Eiger north face, which was successfully conquered for the first time in 1938, and the Wetterhorn. The welcoming green hollow in which the village nests, is still a huge draw for visitors. Grindelwald is also another favored skiing destination, having the largest ski resort in the Jungfrau region.

Another gem located in the Bernese Oberland, Interlaken, has been a tourist destination since the 1800s. Situated between two lakes, Lake Thun and Lake Brienz, and surrounded by breathtaking mountains, Interlaken is a photographer’s delight. This vacationer’s paradise is an ideal starting point for numerous excursions on the lakes or along the hiking paths. Historic paddle steamers ply the waters of the two lakes and one can enjoy a relaxing cruise in the midst of nature’s best.

Called the ‘Pearl of Ceresio,’ this former fishing village, won the title of being the “Most beautiful village of Switzerland” in 2016. The pretty village of Morcote, which is set into a hillside along Lake Lugano is located in the Italian speaking canton of Ticino. Well known for its architecture, some houses in the village date back to the 16th century. The bell tower of the historic Santa Maria del Sasso Church towers over the houses below, adding to the beauty and mysticism of the village. The town is characterized by small alleys, beautiful vistas of the lake and amazing panoramic views.

The snow-covered Alps provide the perfect backdrop to this resort town nestled in a sheltered bay of Lake Geneva in the French-speaking region, southwest of the country. Surrounded by vineyards and other Mediterranean flora, the quays of Montreux are a delight to stroll along. The promenade of the lake which is bordered by flowers, beckons the casual walker. Chateau de Chillon, a 13th-century castle looks onto the lake and has been the source of inspiration of literary works by Lord Byron and Jean-Jacques Rousseau. The Montreux Jazz Festival is a big attraction for visitors from all over the world.

The village of Murren is the highest in the canton of Bern, lying on a terrace at a height of 1650 meters. The creators of James Bond gave the little town additional fame when the Piz Gloria, the revolving restaurant on the Schilthorn was featured in the 1960s film “On Her Majesty’s Secret Service.” One can feast your eyes on the world-renowned Alpine triumvirate the Eiger, Monch and Jungfrau from the revolving restaurant. The spectacular 360-degree panorama is a treat for the soul.

A magnificent medieval castle stands out prominently in this beautiful town which is situated on the shores of Lake Thun. Nestled between vineyards and forests, with a mild climate and abundance of sunny days, the town of Spiez attracts many visitors. The Neiderhorn Range which rises above the lake provides an astounding panorama.

One of the most beautiful mountain villages of Switzerland, Soglio was called The Gate to Paradise (La soglia del paradiso) by the painter Giovanni Segantini who spent several winters here. Cobblestone streets, giant sequoia trees and breathtaking views are just some of the things that make this village special. Soglio is a perfect blend of nature, culture and history. The prominent landmark of Soglio, the Church of St. Lorenzo stands tall against the magnificent mountains, overlooking the village. Via Bregaglia, a trail that passes through an enchanting landscape of wildflowers is another magnet that draws visitors here.

Nicknamed the “Jewel of the Untersee,” Stein am Rhein is said to be one of the best preserved medieval small towns in the German-speaking part of Switzerland. The magnificent timber-framed houses, façade paintings, oriel windows and charming streets are hardly reminiscent of the Roman fortress that it once was. The well maintained Hohenklingen Castle perched on a small rocky spur, looms over the walled town. The baroque onion spire of the Burg Church, dedicated to St. John the Baptist is also visible from afar. The medieval St. Georgen, Benedictine Monastery, which is now a museum, sits in an attractive position on the river Rhine.

Accessible only by train from Lauterbrunnen, Wengen lies on a wind-protected sun terrace at the foot of the Jungfrau mountain. The town which is a popular skiing and climbing destination, receives a steady flow of visitors throughout the year, more so in the winter when the adventure seekers hit the slopes. With cozy timber homes, holiday chalets and hotels dating from the belle epoque period dispersed throughout this picturesque region, Wengen is another of Switzerland’s ‘picture perfect’ towns.

This is probably one of the world’s most attractive vacation villages because of its pristine location. Lying at the foot of one of the world’s most iconic peaks, the Matterhorn, this town is one of the world’s most popular and ‘glitzy’ skiing destinations. Zermatt is the highest car-free resort town in Europe, which means that it has a long ski season. Known as ‘Matterhorn glacier paradise,’ one can ski the year around on Zermatt’s glacier. For eye-popping views of the beautiful mountain, take a hike through the many trails up the mountain, or ride a cable for a closer view. Make the most out of your vacation by choosing to stay at one of the 11 Best Hotels in Zermatt.