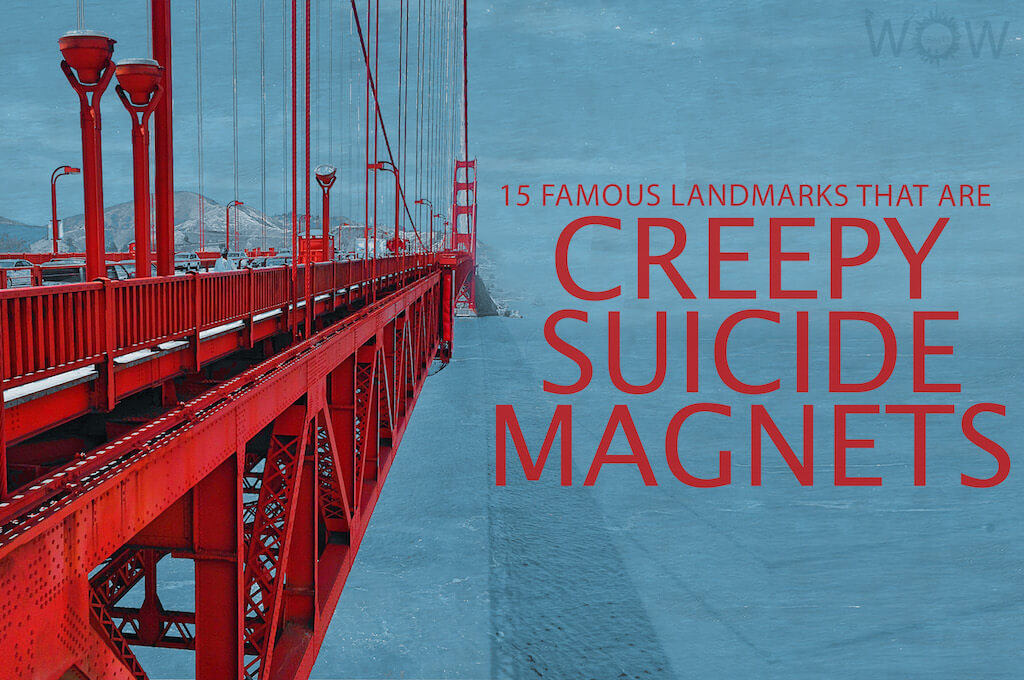 Bridges, cliffs, towers, and falls offer the most magnificent views. However, these sometimes attract people who want to commit suicide. According to the World Health Organization, there’s one person dying from suicide every 40 seconds. Unfortunately, a good number of suicides happen at some of the most beautiful locations. Here are 15 famous landmarks that are creepy suicide magnets.

The Acropolis is a symbol of civilization as it displays one of the greatest architecture of the fifth century B.C. However, the ancient buildings of Athens seem to attract people– foreigners and locals alike– who want to commit suicide.

This cliff, found in the northwestern coast of Estonia, gives you the most wonderful view of the Baltic sea. It’s unfortunate that it has gotten a negative reputation as a suicide magnet. The place is especially popular among young suicide jumpers.

It’s hard to talk about Beirut without talking about Pigeon Rocks – two huge limestone formations found at the westernmost tip of the city. The rocks are said to be the remains of a sea monster that Perseus has turned into stone using Medusa’s head. Unfortunately, a lot of people intentionally venture too close the cliff’s edge and jump to their death.

Eiffel Tower is not only known as the symbol of Paris. It’s also a suicide hot spot. Jumping off the “Iron Lady” is, in fact, the third most common way to commit suicide in France– just next to hanging and poisoning.

The chalky headland of East Sussex opens into the English channel. You’d expect that the headline’s dramatic panorama would attract people who want to relax. However, it turns out that it attracts more people who want to commit suicide.

Niagara Falls welcomes about 14 million tourists every year. Three waterfalls at the straddle of Ontario and New York create a great spectacle of icy mists and rushing water surges. Around this majestic spot, you’ll find the most popular suicide destinations. About 20-25 suicide attempts happen in Niagara Falls yearly.

In Australia, the Gap is most notorious for suicides. The Gap is an ocean cliff that faces Tasman sea. It’s found in eastern Sydney and is a popular tourist destination. Rising 100 feet above sea level, it has seen its share of people jumping to their deaths.

Suicide on England’s public transit system, London Underground, has been a problem since the 19th century. Suicide is so common here that researchers and authorities alike have started to create suicide preventive interventions around the underground railway network.

Aokigahara, popularly known as the Suicide Forest, is historically reputed as the home of Yurei or dead spirits. Eventually, however, it starts attracting people who want to meet their death as well. There are reports of more than 70 suicides inside the forest yearly.

From 1937, the year its construction ended, there were records of suicide in the Golden Gate Bridge. Over a thousand bodies have been recovered from the strait below. Despite being one of the Wonders on the Modern World, the bridge has not been able to shield itself from people plunging themselves to death.

One of the longest and most notorious bridges in China, the Nanjing Yangtze River Bridge spans 4.5 kilometers. It does not only attract people who want to go from Pukou to Xiaguan district but also those who are tormented with life. It is said that at least one person jumps off the bridge every week.

New York, home to over 6,000 high-rise buildings and the epicenter of arts. New York– where more people die from suicide than car crashes. In the past few years, the suicide rate in the city has dramatically increased. In 2014 alone, there have been more than 500 deaths. It seems like the New York skyline has become a favorite among people who want to die from heights.

Mount Mihara is a volcano with a terrifying legacy. A thousand years ago, it was considered a sacred site. And then, it started captivating suicide jumpers. For more than 250 years, the place has been plagued by them. The 1930s saw the worst of it as there were as many as 2,000 suicides in a year.

This canal was first planned during the 1st century A.D. However, premature deaths of emperors, geological problems, and the lack of finances have deterred its completion. It’s not until 1893 that the Corinth Canal was finally completed. Nowadays, the canal has become a known tourist attraction. Though, it seems that some tourists like jumping off the canal more than cruising through it. Police records found suicide jumpers from about 15 different countries.

Also known as the 15 July Martyrs Bridge, this 1560-meter long suspension bridge in Istanbul is one of the longest in the world – connecting Europe and Asia. It boasts breathtaking views of Ortaköy and Beylerbeyi. Though typically closed to pedestrians, suicide jumpers have been known to frequent Bosphorus Bridge. Within 10 years, there have been 65 recorded suicides. Not as surprisingly, some of the 11 Best Hotels In Istanbul, Turkey offer the view of this bridge.