15 Most Amazing Shopping Malls In The World 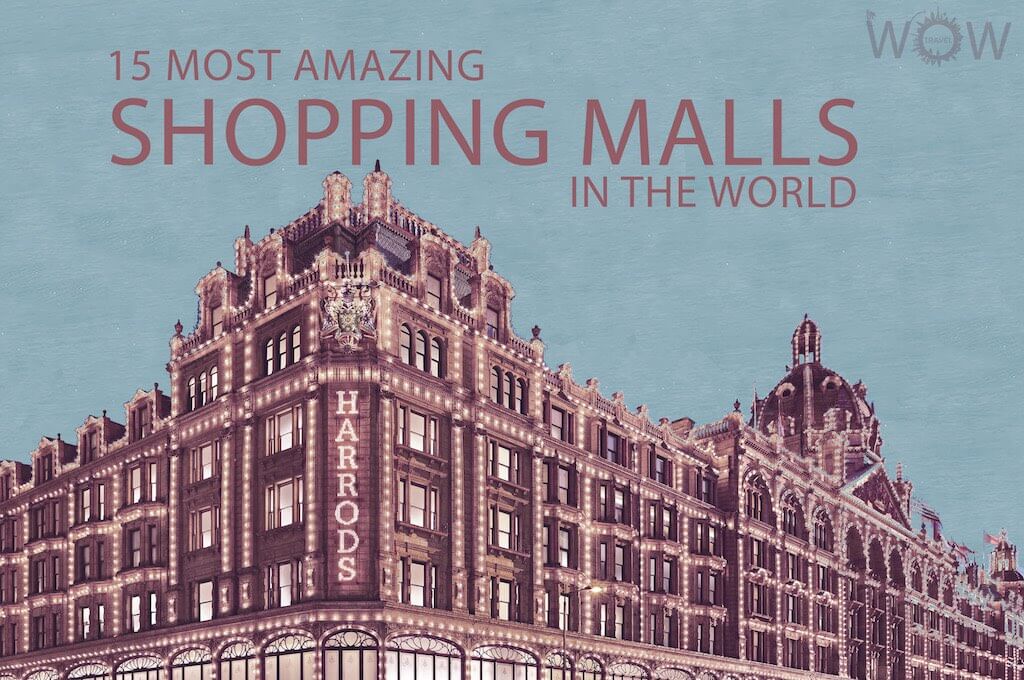 Online shopping may be the in thing these days but it can never replace the real thing. For the die-hard shopaholic, there’s nothing better than spending the day at the mall. With so much to see and do at the malls these days, a day out at the mall is an experience in itself. From theme parks to bowling alleys, skating rinks, and fine dining, malls these days have something for everyone. The malls listed here may not all provide over the top amenities, but the uniqueness of each one makes it to this list of ‘must see’ shopping centers. Here are the 15 most amazing shopping malls from around the world.

This mall with 390,000 square meters (4.2 million square feet) of retail space, draws about 40 million visitors a year. Constructed on the site where the famed Metropolitan Stadium once stood, ever since its opening in 1992, the mall has been one of the top tourist destinations in the country. Hosting more than 400 events in the year, ranging from fashion shows, celebrity appearances and concerts, the mall continues to pull in the crowds. There are more than 520 stores, an aquarium, and a giant Lego store. 14 movie theatres and a Nickelodeon theme park make this a ‘go to’ destination.

At the heart of the Las Vegas strip, adjacent to Caesar’s Palace, is this rather interesting shopping space dubbed as “The Shopping Wonder of the World.” Its unique interior design replicating ancient Rome, 160 specialty shops, a giant 50,000-gallon aquarium, talking statues and world-renowned restaurants make The Forum Shops a ‘must visit’ destination.

The Court and the Plaza of the King of Prussia mall combine to make it the largest mall on the East Coast. Ever since it opened its doors in 1963, the mall has been a shopper’s paradise. Featuring 8 major department stores like Macy’s, Bloomingdale’s, Nordstrom and others, 40 eateries and about 400 retail shops the mall receives a steady stream of shoppers.

This 500,000 square-meter (5.3 million square foot) mall in Canada has more than 800 stores and 10 attractions. One of the biggest draws for visitors is the replica of the Santa Maria, the ship Christopher Columbus sailed on. The ship can be booked for events and parties. Besides this, there is also a waterpark, an indoor amusement park with more than 27 spectacular rides, an ice palace and an underground aquarium. The Fantasyland Hotel which is also a part of the mall has interesting rooms with various themes, such as ‘Hollywood,’ Polynesian and Truck Stop to name a few.

A popular fashion and lifestyle destination in Doha, the Villagio mall is popular for its Venetian styled interiors, combined with some interesting skylines showcasing different times of the day. One of the main attractions is the canal running through the center of the mall on which you can take a gondola ride. The mall also has an indoor Olympic sized skating rink, a wonderland for children and a 13-screen luxury cinema.

The largest department store in Europe, Harrods lays claim to having its own unique postcode, SW1X 7XL and being the site for the world’s first escalator. Spread over 5 acres with 330 departments including its seasonal Christmas department, Harrods has been attracting visitors to its environs for years, not just for the shopping experience but also for the ambiance. The most popular departments of Harrods are the food halls on the ground floor which offer fine delicacies.

If Rome was the inspiration for The Forum Shops, Egypt is the inspiration for the Wafi mall. The mall with its hieroglyphic covered columns is designed to resemble an Egyptian pyramid. A large statue of Ramses looks down at you from the extravagant courtyard entrance. Everything about the mall isn’t Egyptian though. There are several themed areas like Bourbon Street and Chinatown to name a few. The mall also has a theme park, restaurants, a luxury hotel, a petting zoo and numerous retail shops.

GUM is what the main department stores in many cities of Russia are called. The GUM in Kitai-Gorod of Moscow, is the most famous in the region not only for shopping but also for the rich history behind it. Facing the Red Square, the imposing structure built as part of the Upper Trading Rows, was once taken over to be used as office spaces by Stalin till it was renovated and reopened in 1953. Most of the 150 stores feature high-fashion brand names familiar in the west. GUM also has a cinema, a huge outdoor skating rink near the Red Square and a multi-purpose demonstration hall used for various events.

Three floors of the mall are demarcated exclusively for technology products but this mall has much more to offer. With over 1,000 retail shops, two amusement parks, a bowling alley and a food court, the mall boasts a monthly footfall of over 2.5 million people. An interesting feature of the mall is the “1st Avenue” which is designed to resemble New York’s Fifth Avenue. It even has a replica subway station!.

This isn’t exactly your idea of a mega mall but situated in one of the most beautiful places in the world, this historic trading hall dating back to 1228 will definitely grab your attention. The store has preserved the original architectural details and has three floors of galleries with pennants in Renaissance style marking out the different departments which stock over 300 luxury brands. The ground floor is the best place to find authentic Venetian treasures and crafts, making it one of the best places in Venice for genuine souvenirs. The best part of the Fondaco is the rooftop balcony from where you can possibly get one of the best views of the city.

Established in 1912, this historic upmarket store located on Boulevard Haussman is a must-visit venue. Three buildings combine to bring you the best of luxury goods and a wide range of other brands to suit all budgets. The store has a remarkable dome and a panoramic view of Paris which makes it a ‘go to’ destination for tourists. A weekly fashion show is also hosted by the store for visitors.

In a place like Las Vegas, a mall with gondolas and a replica of St. Mark’s square should not come as a big surprise. Located just adjacent to the Venetian Hotel and Casino, and the Palazzo, the mall is a good place to take a break from the gambling tables. Instead of trudging from one store to the next, you can enjoy a leisurely ride in a gondola and browse by the stores till you decide which one to stop at. Part of the charm of shopping at The Grand Canal Shoppes is the ‘Streetmosphere’ where performers and entertainers are seen throughout the walkways.

Besides the 1,200 stores and 120 restaurants that the mall has, some of the other notable attractions of this mall are the Dubai Aquarium and Discovery Center, housing about 33,000 sea creatures and Kidzania, the children’s entertainment area. The mall also features a zoo and water fountains. A mini airport for kids is another big draw as children can fly make-believe planes here.

Sunny Hawaii is home to the world’s largest open-air shopping mall, which is also a huge draw for tourists to the state. One can indulge in the gastronomic delights of typical Hawaiin cuisine, at any of the restaurants and kiosks serving traditional fare. A weekly farmer’s market and a daily hula show are some of the other attractions of this mall. With four department stores, more than 350 shops and one of the largest food courts, it is definitely a destination worth visiting. Planning to visit? Make sure to stay at one of the 11 Best Hotels In Honolulu.

The Galleria is one of Houston‘s biggest tourist attractions, attracting over 24 million visitors a year. Spread over 2.4 million square feet, with 400 stores and restaurants and two high rise Westin Hotels, the mall attracts people in droves. Amenities like a full-size ice rink, two swimming pools, and a state-of-the-art children’s play area are just some of the things that the mall has to offer.