15 Of The World’s Most Strange Abandoned Places 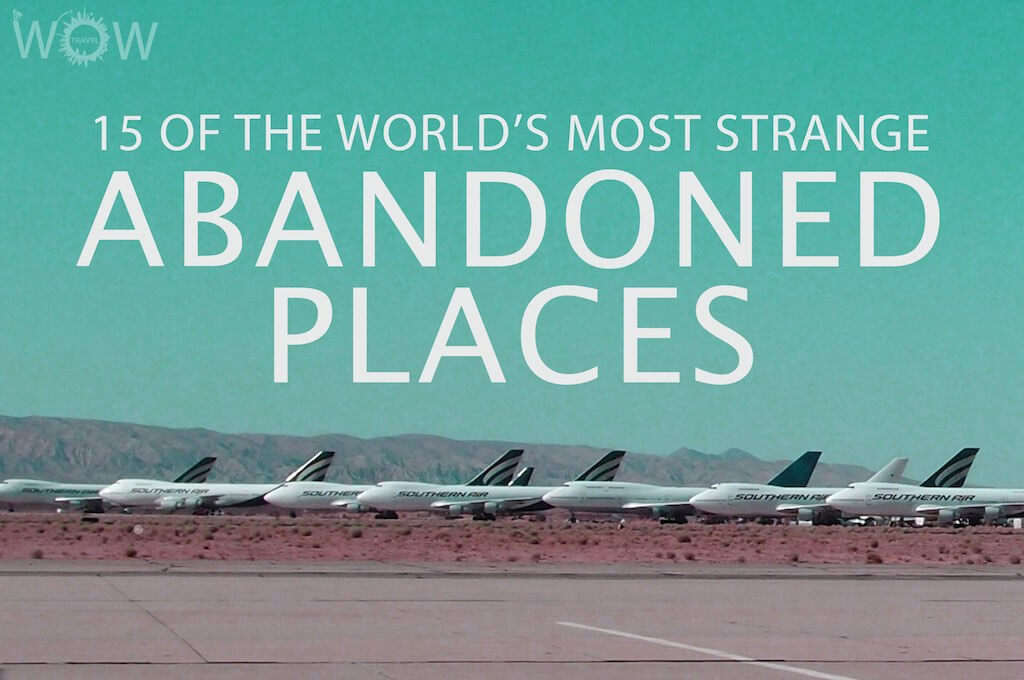 Behind the eerie touch and rotting feel of abandoned ruins lie unheard stories. While their ghostly look stirs our imagination about legends about them, the splendor of their empty space entices us with aesthetic charm. These ruins of crumbling structures invaded by nature hold a fascinating appeal thanks to their stories of past and weird look at the present. Here are 15 of the world’s most strange abandoned places

An entire town was cursed by a sorcerer and abandoned by its population. The ruins of the fortified city remind one the classic tale of love, beauty, betrayal, and war. Haunted stories about Bhangarh are so widespread that authorities have prohibited entry after sunset. A visit to the place surrounded by an aura of weirdness and mystery is surely for those with guts and courage.

Built as the capital of the world’s most powerful empire and the largest economic power, Fatehpur Sikri was abandoned after 15 years. The pristine architecture and imperial grandeur are still visible in its majestic cluster of buildings, tombs, gates, and walls. Built of red sandstone, this regal “city of victory” could not sustain its population due to water scarcity forcing its glory to be a relic of past.

An ancient city continuously inhabited for 1,500 years was abandoned in 1980 after recurrent natural calamities. The medieval town had a tryst with Hollywood through movies, such as King David, The Nativity Story, The Passion of the Christ, and James Bond’s Quantum of Solace. Craco was also a popular spot with Italian movie makers. It sustained through wars, economic hardship, and poor climate. But a landslide wiped out a portion of the city in 1963. Floods had their havoc in 1972. The final blow came in an earthquake in 1980 and Craco never recovered.

A bustling city of 50,000 became a relic of history on the night of April 27, 1986, after authorities ordered a mass evacuation following a catastrophic nuclear accident. It was founded in 1970 close to the ill-fated Chernobyl Nuclear Plant to house scientists and workers. The disaster forced inhabitants to leave the city for good leaving behind everything. Pripyat continues to be a part of the guarded exclusion zone four decades later.

The place has its fame as a sanctuary of the abandoned and worn-out planes. Sitting pretty amid the desert landscape, it is home to more than 1,000 commercial airliners. The boneyard is a showcase of sky-flying dreams of human civilization and yet a sad reminder of how economic downturn saddled those dreams.

Once a top-secret base built by the then USSR to house its most potent nuclear submarines, Balaklava is now a naval museum. From 1957 to its abandonment in 1996, the huge aquatic facility was home to a small underground town with hidden residential areas. The indestructible base was designed to survive any type of direct atomic annihilation.

A secretive bunker that can withstand any nuclear attack was built in 1983 to provide refuge to communist leaders of East Germany against any NATO attack. The now-defunct three-story underground facility with 170 rooms at a depth of 230ft below the ground was an example of the most advanced technology of that time. Its “cushioned” rooms with fountains were able to sustain any seismic wave generated by a nuclear detonation.

Stood as a testimony of how human ingenuity fall victim to its own failure to see things in the right perspective, Sinai has about two dozens of huge concrete carcasses dominating the desert sands. Originally built to make the area a tourist hotspot, these five-star hotels were abandoned following allegations of corruption, investment failures, and lack of tourists. Finally, the scourge of terrorism in Sinai buried their future. Still standing against mountain and desert backdrop, these hotels have created a landscape of their own.

About 100 ft beneath the Qiandao Lake, Shi Cheng or the Lion city is it “the Atlantis of China.” It has a history dating back to the first century AD. The inundation caused by the Xin’an River Dam forced its 300,000 to abandon this ancient city metropolis forever. Huge archways, the massive stone statue of lions and dragons, and expansive cityscape under the water offers a perfect diving sojourn.

A clandestine nuclear missile base, Camp Century resembles an image from a James Bond movie. The subterranean city carved beneath Greenland’s thick ice sheet in 1959 has tunnels totaling over 3 km in length. Originally planned to be a ballistic missile site, the bunker-city was abandoned in 1967. Ice has started reclaiming its fiefdom.

Once a flourishing village of more than 3,000 people in the 1980s, Houtou Wan is now being taken over by dense layers of ivy. Located on Gouqi Island on China’s eastern coast, the village was abandoned following depletion of marine resources in the area. A blanket of lush climbing plants has covered this cliffside village to create a beautiful wonderland.

This 700-year-old village is fighting for its survival for two decades. With a decision to destroy it to make way for Antwerp port expansion, Doel is staring at its end. The riverside village has a residence built by Peter Paul Rubens, the renowned 16th century Flemish artist. Doel 2020, a group working to save the village has turned the place paradise for graffiti artists. Street artists from across Europe have made their way to Doel and decorated the village walls with impeccable graffiti art.

Build to replicate the underworld on earth, the old city of Fengdu stands as an island surrounded by the vast reservoir of the Three Gorges Dam. Called as the ghost city in popular annals, it was said to be founded by two immortals. The landscape is dotted with paintings, demon symbols, and sculptures depicting life after death and before rebirth. Every monument be it temples, bridges, or passes, everywhere there is a fascinating depiction of the underworld.

The port in the Uzbek desert with a large assortment of boats creates a strange scene. This is Muyank, once a bustling seaport on the bank of the Aral Sea. As rivers draining into the Aral Sea were diverted for irrigation, the water receded 90 miles. With the retreating shores, most inhabitants left the town for greener pastures leaving the busy port to turn into a desert wasteland and a graveyard of rusting ships.

The town stands frozen in 1974, the day when it was abandoned after Turkey invaded Cyprus. A part of Famagusta city, this seaside neighborhood was Cyprus’ top tourist destination prior to the invasion. Its 40,000 Greek Cypriots fled fearing massacre on the arrival of Turkish forces and barred from returning. The ghost town continues to be an empty showcase of 1970s fashion.