San Marino, sitting inside Italy, with a land area of just 61 square kilometers is the fifth smallest country in the world. Completely surrounded by Italy, it’s quite surprising how the country has managed to remain independent for so long. In fact, San Marino boasts of being the oldest surviving sovereign state and constitutional republic in the world. Founded in AD 301 by a stonemason Saint Marinus, and governed by a constitution that dates back to the 16 century, the country remains a curious blend of modernity and traditions.

Similar to Vatican City and Lesotho, San Marino is one of three countries in the world that sits inside the boundaries of another country. Not surprisingly, Italian is the official language of this small country. The country’s cuisine is also largely influenced by its neighbor. Since 1862, San Marino and Italy have jointly been part of various conventions. As such, there are no border formalities with Italy although visitors can buy officially canceled souvenir stamps for their passports.

The capital City of San Marino looks down from its lofty perch on Mount Titano. Enclosed by medieval stone walls, the original settlement is off-limits to traffic. Cafes, restaurants and duty-free shops line the sides of the single cobblestoned street. Rising from the city walls and located on three separate peaks are the Three Towers of San Marino, the crowning glory on the mount. The oldest of the fortresses, Rocca Guaita, dates back to the 11th century.

San Marino’s reputation as a castle town is quite undisputed. Several small villages set on high peaks surround the capital. Almost all these villages have castles of their own that offer spectacular views of the countryside. A stand out among these castles is in Montegiardino, a town that can trace its origins to the Roman era. 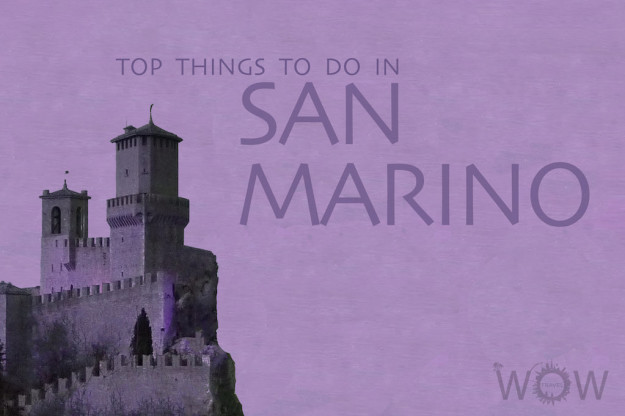 Top 4 Things To Do In San Marino

The Most Serene Republic of San Marino is a must-see destination for lovers of history and for those who love picturesque panoramas. Surrounded by Italy on all sides, this high-GDP micro-state of only 35,000 residents is indeed an enclave of calm. The medieval architecture, the warm Mediterranean climate and the fantastic heritage are all a part of…