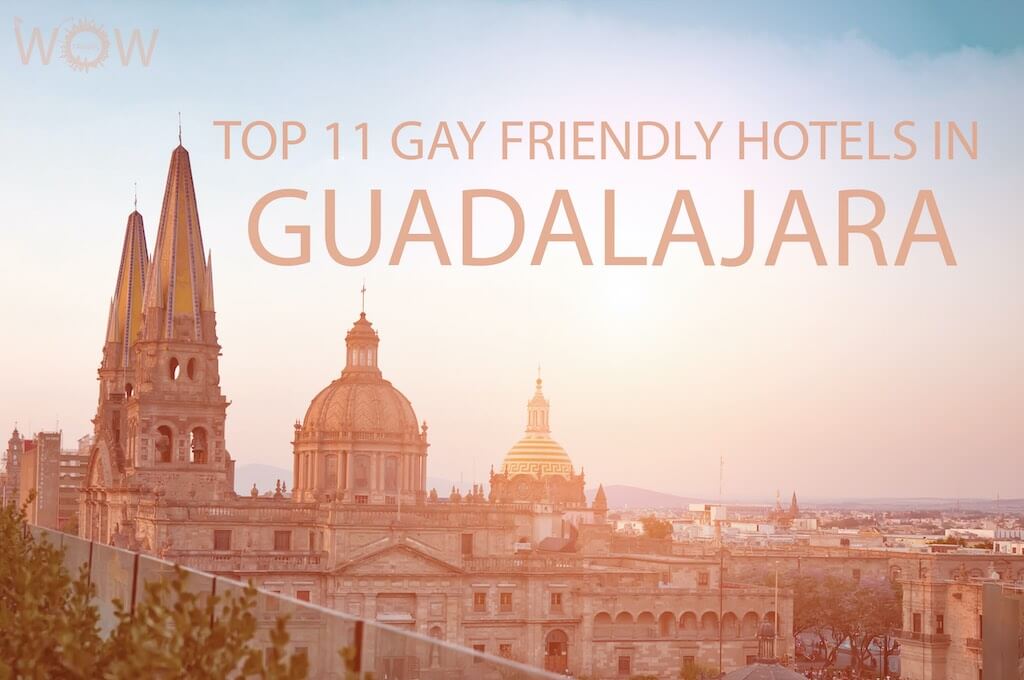 Guadalajara, the second biggest city in Mexico is renowned for being one of the most gay-friendly cities in Latin America. As such it has earned the sobriquet of being the ‘San Francisco of Mexico.’ Although not as forward as San Francisco or New York, the gay scene in Guadalajara thrives. Gay Guadalajara is evident in the historic center of the city with over 30 gay bars and clubs found here. However, the hip suburb of Zona Rosa is also gradually metamorphosing into the next gay district of Guadalajara. You’ll find plenty of gay hotels in Guadalajara in these areas. While the historic center has more affordable gay accommodation, you’ll find more high-end hotels in Zona Rosa. Both the gay areas of Guadalajara are fairly safe to walk around at night, but as with all new destinations, it’s always best to be a little cautious.

This gay-friendly city has plenty of options for the gay traveler. Whether it’s the renowned historic sites of the city or the gay nightlife, there’s plenty to keep you busy here. Most of the gay bars and nightclubs are centered around Centro along Prisciliano Sanchez but you’ll find some stylish restaurants and upscale clubs in Zona Rosa. The taxis are fairly safe and affordable in Guadalajara, Mexico so no matter where you stay, commuting won’t be a problem.

Strategically located in the historic old town you’ll find the Casa Alebrijes, a gay hotel in Guadalajara. Although the neighborhood may not look that interesting given that it has many small businesses that shut down in the evening, bars and clubs are within walking distance from here. The hotel is not exclusively for gays but its proximity to over 25 gay bars and nightclubs in Guadalajara makes it a good base. If you’re interested in a bit of sightseeing during the day we recommend the Private Tour of Guadalajara Historic Center and Tlaquepaque.

The rooms are clean and comfortable and equipped with free wifi, a DVD player and other basic necessities. Don’t be fooled by the basic exterior of the building as the interior’s beautifully designed with a garden patio and atrium fountain on the first floor. The second floor has a balcony where guests can relax and mingle.

This four-star accommodation located in the heart of the city is a fairly new gay friendly hotel in Guadalajara. The Alborata Hotel is a short drive away from Teatro Degollado and downtown Guadalajara, not too far away from the gay area of Guadalajara. It’s about a 15-minute drive to the Caudillos Disco Bar from here. Art galleries, restaurants, boutiques, and pubs are all within walking distance from here.

Guests have access to a sun terrace and a concierge service. The rooms are elegantly designed with comfortable beds and equipped with amenities for a comfortable stay. Free wifi and free continental breakfast can also be enjoyed here. You can also unwind at the outdoor pool or make use of the spa services. The hotel also has a restaurant and bar.

An ultra-modern hotel located in one of the most picturesque neighborhoods of Guadalajara, that will put you close to where all the action is. The gay-friendly five star, Del Carmen Concept Hotel housed in a fully restored neoclassical estate, dates back to the 19th century. Just a five-minute drive from the hotel is the Regional Museum. If museums aren’t your cup of tea, you may be interested in the Mexican Muralism Cultural Tour which will give you an insight into Orozco and his murals. Popular nightclub Babel is only a 4-minute walk from the hotel.

Nine suites of the hotel are designed to commemorate the representatives of the Rupture artistic movement. As such, each room has unique decor that really stands out. Comfortable beds, free wifi, and a good shower are what you can expect here. The hotel also has a pretty good restaurant and very friendly staff.

Located in the booming Lafayette district in Guadalajara, the gay friendly Casa Habita is a fairly new hotel that blends the traditional with the modern. Housed in a 1940s mansion this design-led hotel offers guests a host of facilities such as an outdoor pool, a retro-inspired bar and a terrace with impressive views of the city.  Guests can also enjoy a massage or steam bath at the spa or visit the hotel’s solarium.

Tastefully designed rooms with floor to ceiling windows are bright and well equipped with modern amenities. LED TV, Bluetooth speakers, free wifi,  and rain showers are part of each room. Guests can also bring their furry pets along upon special request. The Lafayette neighborhood is the up and coming hotspot of the city, scattered with bars, restaurants, cafes and pulsating nightlife. So you’ll have plenty to do if you decide to set up base here.

Centrally located in the hotel zone of the city, this gay hotel in Guadalajara boasts a rooftop terrace and modern accommodation. Fiesta Americana places you close to the Expiatory Temple and popular attractions like the Glorieta Chapalita and Escultura La Estampida. Its location near the high-end gay area of the city means that you have easy access to the gay bars of Guadalajara. Popular gay bar California’s and Voltio is less than a 10-minute drive from here.

The rooms at the hotel are equipped with flat-screen TV, airconditioning and free wifi. Guests can also enjoy the services of the lounge bar, restaurant and fitness center that are a part of the hotel.

Large rooms, a concierge and a 24-hour reception are just some of the facilities that are available at the gay friendly Krystal Urban Hotel. The hotel is conveniently located in close proximity to some of the city’s main attractions such as the Guadalajara Cathedral, Bosque Colomos, and Minerva. It’s also less than a 15-minute drive from here to the gay clubs and bars. We suggest joining the Downtown Guadalajara and Tlaquepaque Tour if you’re keen on discovering more about the historical area of the city.

Spacious rooms offering good views of the city are equipped with amenities such as airconditioning, a fridge, iron & ironing board, and a bath set. Guests also enjoy room service and free wifi. If you’re looking for something more spacious we recommend the Junior Suite with its own private terrace offering panoramic views of the city.

Hotel Fenix prides itself on being the hotel for artists and the most versatile hotel in Guadalajara. You’ll be welcomed openly at this iconic gay hotel in Guadalajara. The century-old hotel is located in the heart of Guadalajara, close to the gay area of the city, which means that gay bars and clubs are within a short walking distance from the hotel. Mascaras Disco Bar is less than five minutes away.

The hotel has hosted the likes of John F. Kennedy and Pedro Infante and boasts of having the best Mexican breakfast buffet. There are several artists in residence who conduct workshops and contribute to enlivening the space with their artwork. You’ll no doubt enjoy a relaxing time at the lobby bar or the restaurant. Rooms range in size and amenities from student rooms to standard, superior and suites. Some of the rooms have sliding glass doors that lead to a private balcony.

Another great gay friendly accommodation in the Lafayette area is the Hotel Demetria. What sets this hotel apart from the rest is the beautiful outdoor pool on the rooftop terrace. It’s a great place to unwind and catch some great views of the city. Interested in exploring the town center? It’s just a fifteen-minute drive from the hotel.

Rooms in the historic building that houses the hotel are also stylish with hardwood furniture, a minibar and everything you would lookout for a comfortable stay. Hotel Demetria also has an a la carte restaurant that serves a daily breakfast buffet and is open for all meals. There are plenty of cafes and other dining options in the vicinity of the hotel.

A few steps from the Cathedral and Mariachis Square, in the heart of downtown Guadalajara you’ll find the gay friendly Hotel Roma. Its convenient location to the attractions and gay nightlife of Guadalajara make it a good place to set up base in the city. Most gay bars and clubs are within an easy walking distance from the hotel.

The hotel is well equipped with facilities such as a terrace with an outdoor pool, a gym, a restaurant and bar. Guests can also avail of free parking at the property. Rooms here are spacious featuring parquet floors and extra-large beds. All rooms have airconditioning, flatscreen TV and free wifi.

Combining tradition and design, the fairly new gay friendly Hotel Real Maestranza is also centrally located in the historic old town. The Cathedral and Guadalajara’s historic square are just minutes away from the hotel. There are plenty of gay bars and clubs in this gay area of Guadalajara to keep your nights busy.

An onsite restaurant, free private parking, a fitness center, and a bar are some of the facilities that you can expect at this accommodation. Tastefully decorated rooms equipped with modern amenities add to the charm of staying here.

If you’re looking for a luxurious stay in Guadalajara we recommend the gay hotel Quinta Real Guadalajara. This beautiful ivy-covered stone building that was once owned by the affluent Martinez family still houses many of the family’s antique furniture and works of art. Although the hotel is not centrally located, it’s about 20 minutes to downtown Guadalajara and about a 10-minute drive to Babel. However, it’s pretty close to the Clemente Orozco Museum and Centro de la Amistad Internacional.

You’ll love the lush green surroundings of this colonial-style hacienda with flowing fountains and an outdoor cascading pool. The onsite restaurant Tierra Mia is a great place to enjoy a delicious Mexican meal. Spacious suite-style rooms are outfitted with jacuzzis or deep soaking tubs to add to the luxury of staying here. Refrigerators, plasma TVs and other amenities are part of the room.

Get Some Culture in Guadalajara: