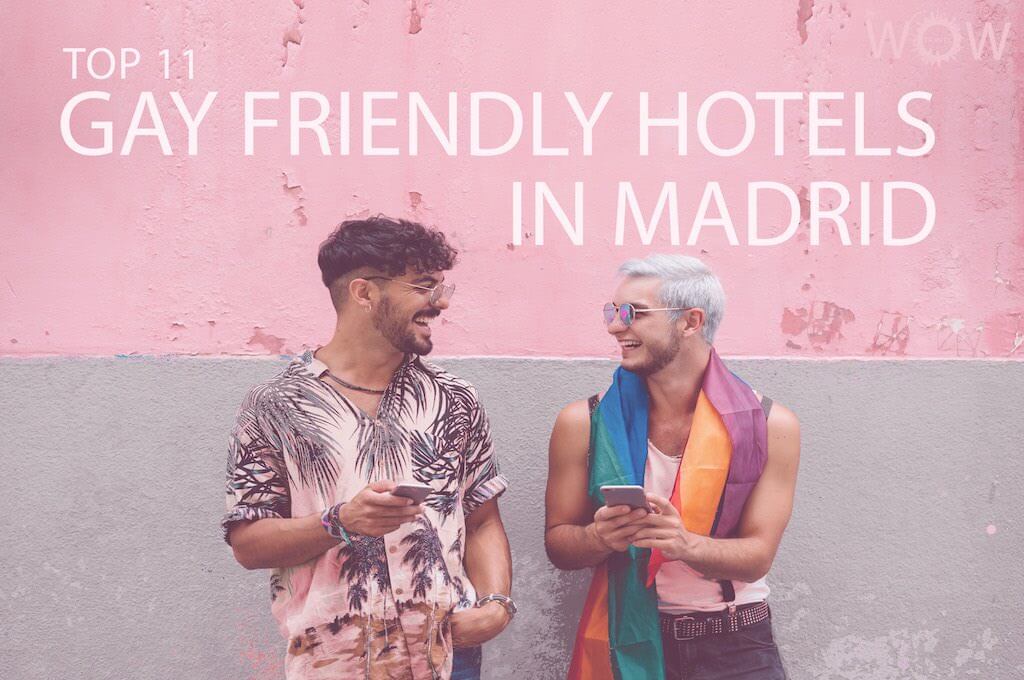 Madrid is one of the friendliest cities for gays in the world and is home to Spain and Europe’s largest gay population. Madrid’s native annual gay parade MADO, or Orgullo Gay de Madrid, is one of the world’s biggest pride parades today. Gay neighborhoods in Madrid like Chueca is where the LGBT community has lived together for decades. Soon, there was a rise in gay friendly hotels in Madrid for the growing LGBTQ travelingt population to the city.

As the city became more accepting, many a great gay area in Madrid like Sol, Retiro, Lavapiés, La Latina, and Malasaña sprung up. That being said, the central Chueca is home to the largest numbers of gay bars and LGBT-specific entertainment places, with Malasaña coming in a close second. In fact, a great way to begin enjoying Madrid is to explore these two gay neighborhoods of Madrid.

Madrid’s only “official gay hotel”, the adults-only Axel Hotel is part of the well-known, international Axel Chain. It features many trendy gay hotels across Spain and the rest of Europe and Asia. The Axel might be hetero-friendly, but they give importance to gays. The rooms are an ode to Madrid’s 80s counterculture with unique avant-garde interiors typical of the Axel chain. We highly recommend that you visit the trendy rooftop Sky Bar, one of Madrid’s most popular spots for meeting the gay public.

What makes Axel Hotel one of the best gay hotels in Madrid, Spain is that it’s hardly 20 minutes away from the clubs and bars of the lovely ‘gayborhood’ Chueca. Two of the most popular hardcore gay cruising clubs, ATTACK and Club Baco, are a five-minute walk from the hotel. A soak in the gay friendly Sauna Lavapiés 10 minutes away is a great way to end a long day.

Only You Boutique Hotel

Ibizan owners bring a slice of the island to the heart of Chueca at the gay friendly Only You Hotel. But you won’t find anything like the Top 11 Gay Friendly Hotels In Ibiza. Housed in a 19th-century villa, Only You features contemporary, luxurious blue-and-white rooms with a hint of sophistication. The hotel excels in both fabulous-chic room designs and services such as round-the-clock breakfast. We highly recommend this hotel for gay travelers looking for a historic hotel with modern, luxurious comforts close to Chueca’s gay bars and saunas. The amazing gay club Delirio is just a minute’s walk away. LL Bar, which is very popular with the gay community, is within walking distance as well. It is famous for its drag queen shows, although the weekend strip shows are the highlight.

Part of the Room Mate Hotels group, Oscar is Madrid’s most popular gay friendly hotels. Located in Chueca’s liveliest area, Room Mate Oscar has loyal gay patronage and is perfect for exploring Chueca’s gay nightlife in the gay area of madrid. In fact, the gay clubs of Rick’s and ZARPA are located literally across the street, while almost every other gay Chueca club is a five-minute walk.

The rooms at this modern hotel feature beautiful, contemporary, geometry-inspired designs and shapes complemented by bright colors. Its gorgeous rooftop terrace, known as Oscar’s Terrace is one of Chueca’s best and a very popular gay destination for dance, drinks, and a swim.

Madrid’s most central area Puerta del Sol, a 10-minute walk from Chueca, features a great nightlife scene. In fact, its the perfect destination to indulge in an entertaining five-hour pub crawl in Madrid, visiting some of the city’s best clubs.

In Puerta del Sol, there’s no better a place to stay than at hostal Puerta del Sol, Madrid’s only exclusively gay hostel. LGBTQ travelers will like it for not only being close to the gay neighborhood Chueca but also Madrid’s attractions and sights. The best feature of the affordable, intimate hostal del Sol is its balconies, which offer stunning, sprawling views of the Old Town of Madrid.

Right across from Madrid’s celebrated Plaza de España lies the stylish, gay friendly boutique hotel of Dear Hotel. If you’re a culture enthusiast, you must certainly watch a stunning Flamenco show at Las Tablas, one of Madrid’s most important and highly regarded Flamenco stages located in the Plaza. Famous for its beautifully minimalist Scandi decor, we highly recommend the Dear hotel for all ardent Instagrammers.

The modern rooms make you feel right at home, and the rooftop bar/restaurant is perfect for breakfast with stunning views. All these and the pool make it one of the Top 11 Hotels With A Rooftop Pool In Madrid. This gay friendly hotel in Madrid, Spain is a 15-minute walk from gayborhood Cheuca. However, My Pleasure, Madrid’s only gay underground dance/electronic music fetish party place is a stone’s throw away. The gay dance venue Club Cool, which features gay parties every week, is a short walk away. Even the gay saunas of Sauna Paraiso and Sauna Principe are within walking distance.

Literature lovers and bibliophile LGBTQ travelers to Madrid should absolutely choose to stay at Iberostar Las Letras Gran Via for multiple reasons. First, its location on the edge of Chueca puts it close to the vibrant gay nightlife. ZARPA, Rick’s and Hot, which is for bears and older gays, are just a block away. Secondly, the hotel pays homage to the neighborhood’s rich literary history.

Housed in a 20th-century structure with original architectural elements, the hotel brims with literary quotes and Spanish literature references. The rooms at Iberostar inspire romance, with some having their own jacuzzi and secluded patios with sun loungers. Last but definitely not least, the Las Letras neighborhood is famed for its rich literary history.

The many a gay bar of Chueca are just five minutes away, while the popular gay friendly saunas of Principe and Paraiso are within walking distance too. You can choose from single, triple, and double rooms. The communal areas in hostal Pizarro, such as its rooftop bar and restaurant, make it a great place to meet fellow LGBTQ travelers.

Just south of the Plaza Mayor lies The Hat, a lovely gay friendly boutique-design hotel with the social life of a hostel. LGBTQ travelers on a budget trip to Madrid will love both the hotel and the location. Firstly, Plaza Mayor is the beginning point for two fascinating walking tours of Madrid – a 2.5-hour of its best attractions and a lip-smacking Tapas tour.

If you’re a gay shopaholic, the gay-owned Hostal La Zona Madrid in Chueca is for you! The hostel sits in Malasaña right next to one of Madrid’s most popular shopping areas Fuencarral. La Zona is extremely gay friendly. Even its website invites and encourages late-night parties, overnight guests, and breakfasts in bed. The gay sauna, Gran Via and one of Madrid’s most popular gay cruising bars Boyberry are right next door. And, Hot is just a block away.

Are you gay and looking to splurge on a luxurious stay in Madrid? Then the 100-year-plus Westin Palace Hotel should definitely be on your list. Located in the cultural heart of Madrid, the Westin has long been a proponent of gay travel. They also host many gay weddings as well. Staying at Westin has its perks. One is that Madrid’s best cultural attractions are a stone’s throw away. So, culture lovers can indulge in a 5-hour tour of Madrid’s museums. Or, how about a 3-hour tour of the Royal Palace? Both are a 15-minute walk away. What’s even better, is that the vibrant gayborhood Chueca and its gay bars and saunas are just a 10-minute walk.

Rooms at the Westin are classic-contemporary and furnished majestically with murals and tapestries. The beds are particularly divinely comfortable, while bathrooms are marble and stocked with the very best of products. The hotel is all about traditional glamour. Expect a grand, Parisian-style exterior, gorgeous décor, and services such as butlers and personal shoppers.

The eco-friendly, pet-friendly and gay friendly Petit Palace makes for a wonderful boutique stay in Madrid’s Chueca. Located just off the main Gran Via, the charming hotel is housed in a 19th-century mansion. Traditional elements such as an iron-and-glass front entrance blend beautifully with minimalist modern room decor. The hotel even offers bike rental services for guests, which is perfect for exploring the Chueca and the surrounding neighborhoods.

Gays will particularly love Petit Palace for its location. One of Madrid’s most popular gay cruising bars, Boyberry’s in the next street. Plus, find the extremely popular gay clubs of Hot, Kavu Next, Rick’s and ZARPA.

Get Some Culture in Madrid: